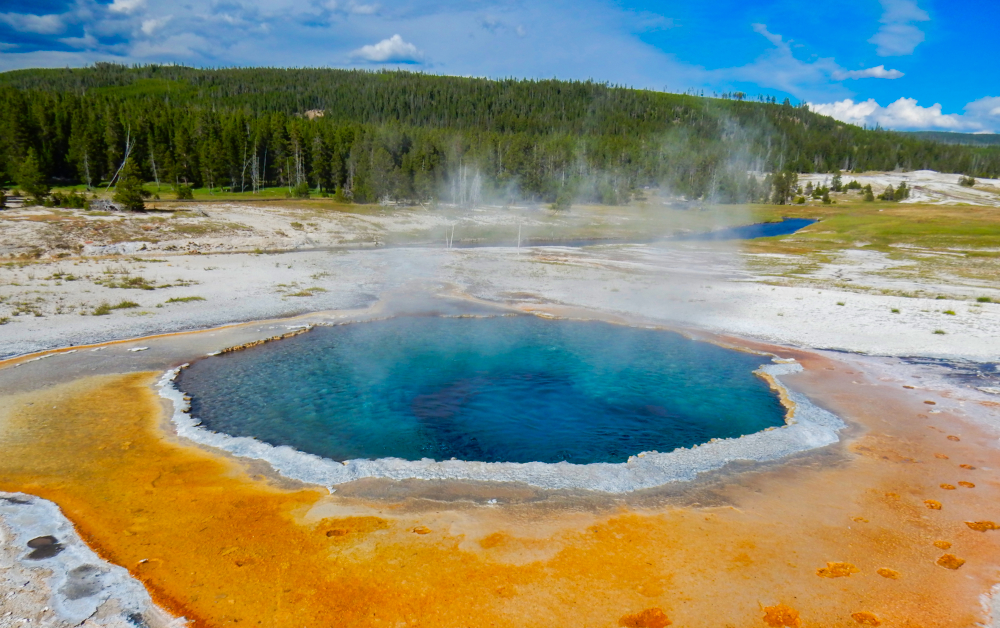 When I think Yellowstone I instantly think of Old Faithful, but the park is much more than just the one geyser. Earth harbors only about a thousand active geysers, while Yellowstone contains about 500 of them within her borders. This makes Yellowstone THE geyser gazing mecca for any outdoor lover. For me, it begged the question: Could I see all nine geyser basins within my visit? I would surely try. Armed with the Yellowstone Geysers app and a daily timetable of eruptions from GeyserTimes.org Hitch and I set out for some geyser gawking, starting out with Upper Geyser Basin, home of Old Faithful. 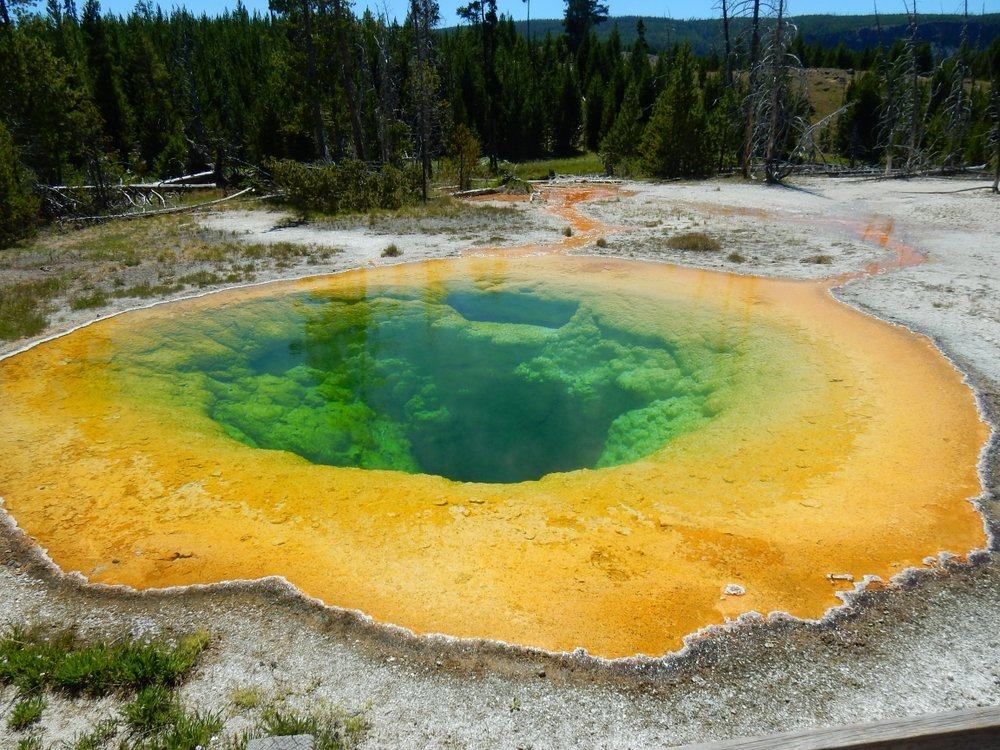 Famous Old Faithful along with four other major geysers, numerous hot springs, and thermal features found within Upper Geyser Basin, are extremely popular, but we wouldn’t let the crowds discourage us. Hitch and I visited this basin a few times and discovered that there is hardly anyone here before 10am and after 5pm during the peak season of July. Before 7am, one may even get a private showing of Old Faithful. Its an added bonus that the hot steam hitting the cool morning air turns the basin into a mysterious misty landscape. 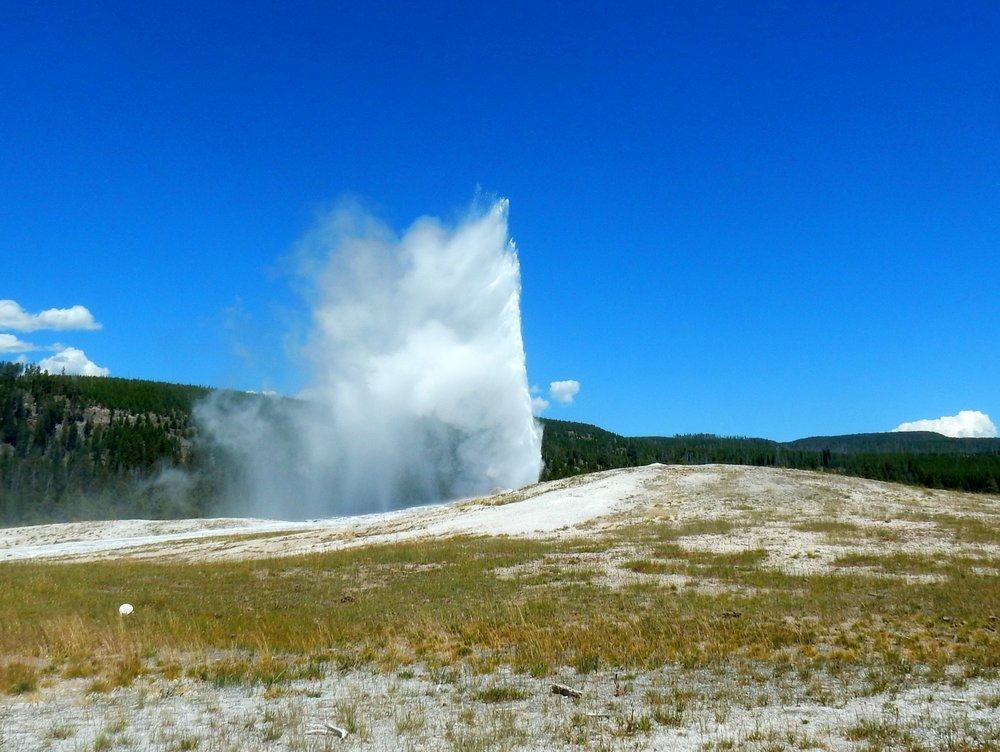 The water in the geyser is 204 degrees Fahrenheit. The steam has been measured above 350 degrees.

On our first visit, we did a quick stop here to view Old Faithful on our scenic drive of Grand Loop. The show is always crowded during mid-day and peak season, but frequent eruptions allow for multiple shows within a day.  For our first viewing, we were greeted by an accurate prediction, but the eruption short and under 2 minutes. During our second viewing of the geyser, Old Faithful erupted 7 minutes late and lasted for 4 minutes. Old Faithful’s eruption can last up to 5 minutes on a good day, spewing up to 8,400 gallons of boiling water, at a maximum height of 184 feet.

In the 1880s, Old Faithful didn’t have packed pews and was intermittently debased into a laundromat. People would unceremoniously stuff clothing into its vent during a dormancy period, and quickly gather them after the eruption. They discovered that sturdy linen and cotton fabrics survived the churning waters, while the wool cloth was destroyed.

On another visit, when a friend from Seattle joined us, we took the easy trails beyond the hub of Old Faithful. We witnessed the thousand-year-old cone of Castle Geyser which has a turbulent eruption every 14 hours and can its height reaching up to 75 feet. 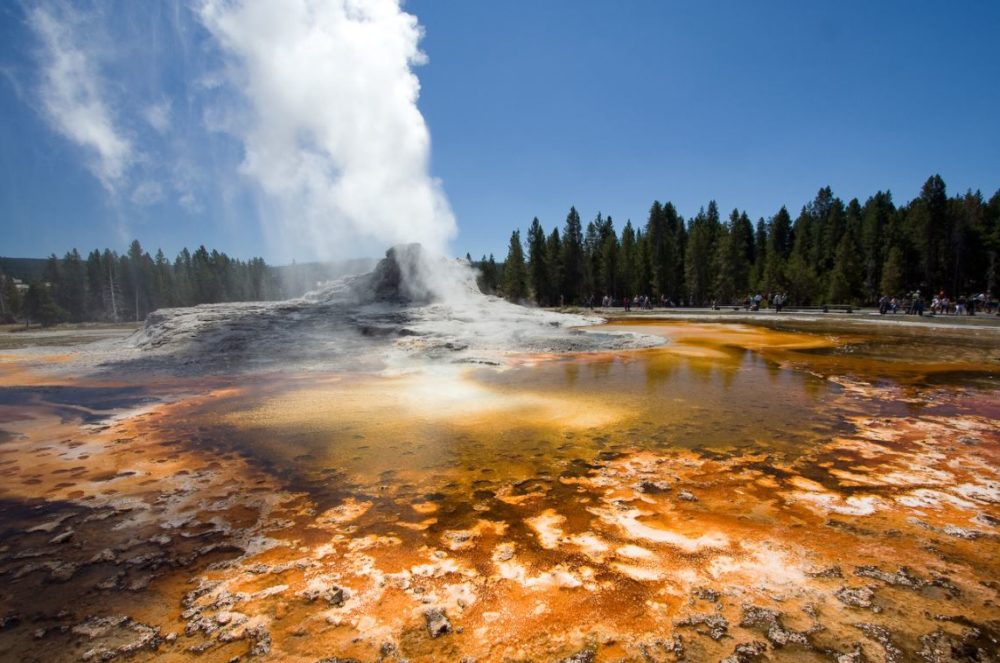 We also encountered Grotto Geyser on one of its active periods. The geyser is included in a group of geysers collectively called “The Grotto,” and is named for the geyser which has a weirdly shaped cone reminiscent of cave-like formations. To me, it looks like a lump of bright white rock riddled with holes. The theory is that the holes were formed when minerals started collecting around trees. Over the centuries, the trees rotted away and left grotto in a swiss-cheese state.

On another day, we took the time to behold Riverside Geyser, right on the banks of the Firehole River, which gives a beautiful and photogenic show. The eruption lasted for 20 minutes and the water arched over the river, while the wind blew the hot water into a fine mist creating a delightful rainbow. Riverside’s accurate prediction times make this geyser a requisite visit. 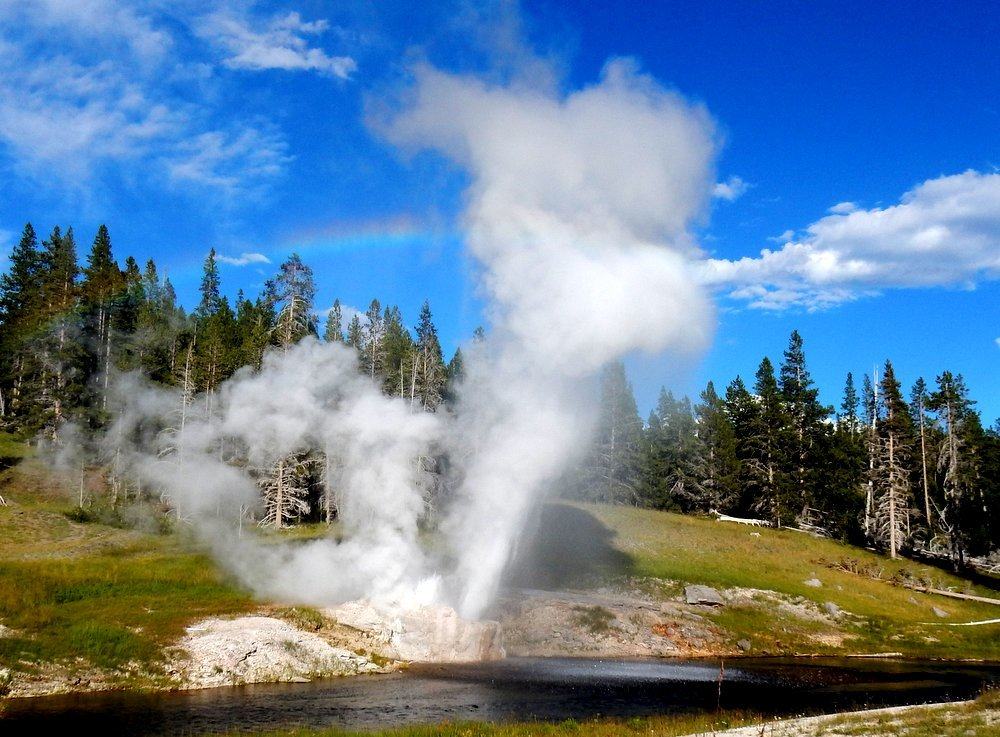 Riverside is one of the most predictable geysers in the park because it is not located near any other geysers that may disrupt the flow of underground water in the geyser’s plumbing.

Just a short walk from Riverside resides Morning Glory Pool. Once a victim of severe vandalism by uncaring tourists, the hot spring slowly recovers but will never reach her past state of beauty. Vandals threw in cans, coins, socks, hats, bath towels, and even a couch. In 1975, the park rangers siphoned water to extract the garbage to aid its recovery. Before the garbage, the high temperatures of Morning Glory caused the water’s color to turn baby blue. Today, Morning Glory’s cooler waters allow the green, yellow, and orange thermophiles to thrive. Incidentally, the fines for littering in a national park are heavy, with fines of up to $1,000 and possibly up to one year in prison for serious damages. 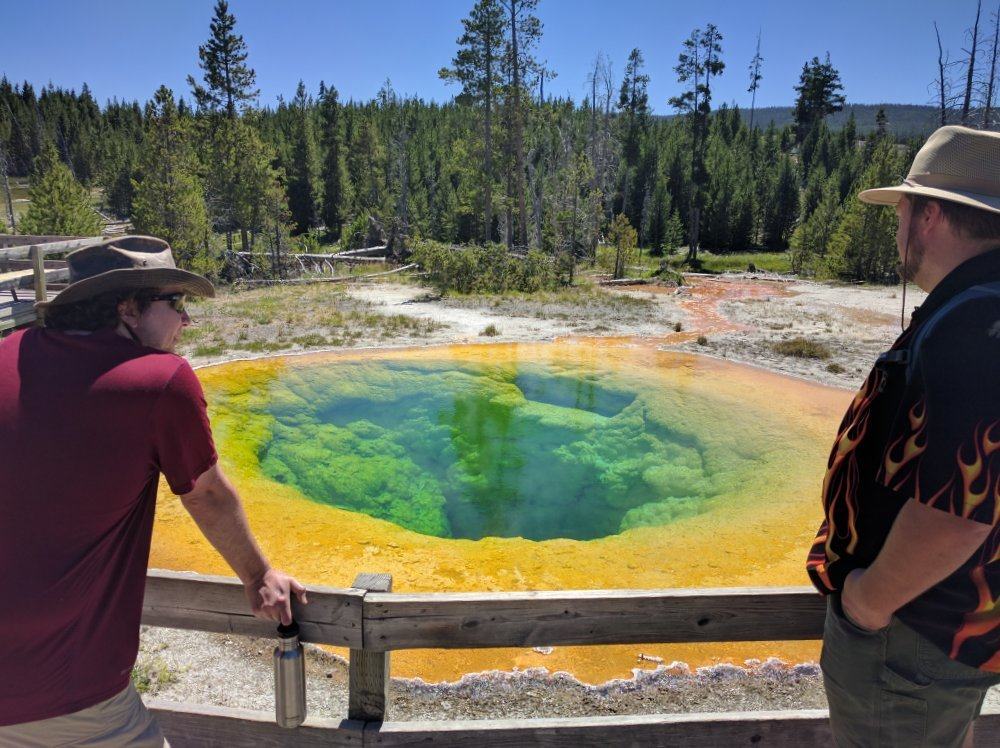 Morning Glory Pool – The distinct color of the pool is due to bacteria which inhabit the water. On a few rare occasions, the Morning Glory Pool once erupted as a geyser, usually following an earthquake or other nearby seismic activity.

On our way back down toward Old Faithful, and up a side trail, we were lucky enough to catch Daisy Geyser erupt. This fountain geyser gave a delightful show with water ejecting at an angle and at a height of 75 feet. We learned from an official volunteer Geyser Gazer, that neighboring Splendid Geyser would sometimes erupt instead of Daisy, thus causing Daisy’s timetable to be unpredictable until Daisy erupts again. Apparently, geysers in the same group use the same heated water supply and can add variety to the size, shape, timing, and duration of their sister geysers. 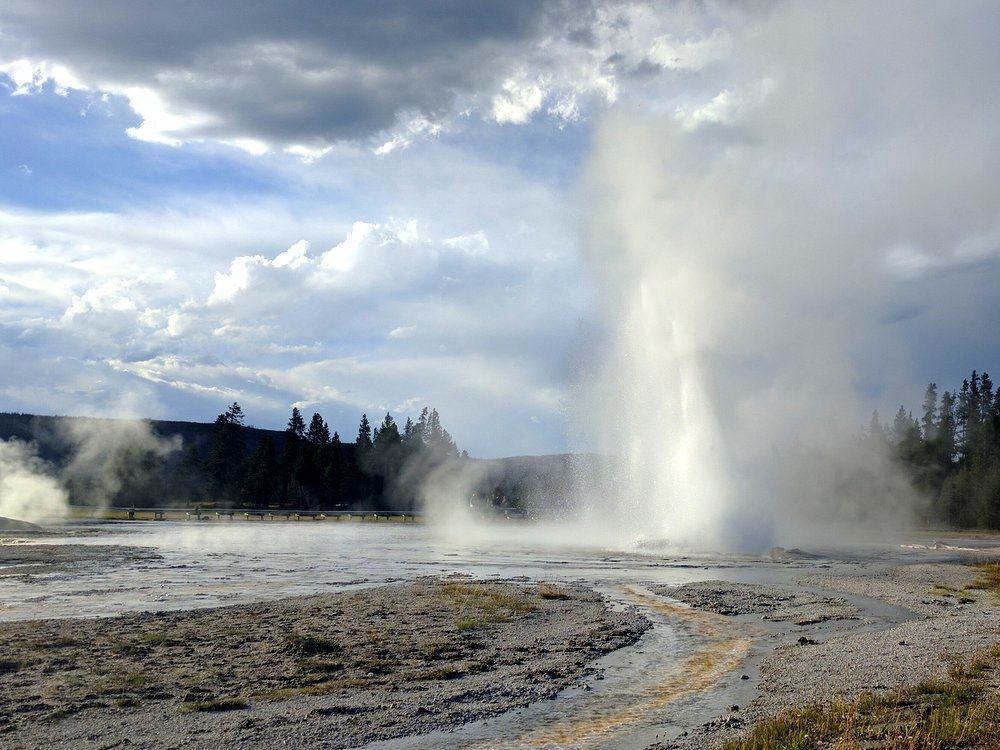 Daisy Geyser: one of the Yellowstone geysers that had its eruption interval disrupted by the 2002 Denali earthquake. It returned to its normal schedule during the following weeks.

On our way back from watching Daisy Geyser, we spotted a big plume of steam billowing upon a distant hill. We asked a volunteer Geyser Gazer the name of that geyser, and he replied with “Lion Group”. From a distance, the steam rose nearly 70 feet tall and lasted nearly 7 minutes. When we reached the hill, I saw that the geyser group consisted of four cone vents, named Little Cub, Big Cub, Lioness and Lion (the largest cone).  Sadly we missed hearing the deep roaring sound in its pre-eruption stage, the reason for its namesake.

We also found Sawmill Geyser in full eruption, so named for the whirring sound it made as it discharged water into the wind. We were surprised at how much the wind cooled the hot water off. Hitch stood downwind, using the spray to cool off in the 80° F heat. After the eruption, the Sawmill’s water fully drained leaving a gaping empty hole. 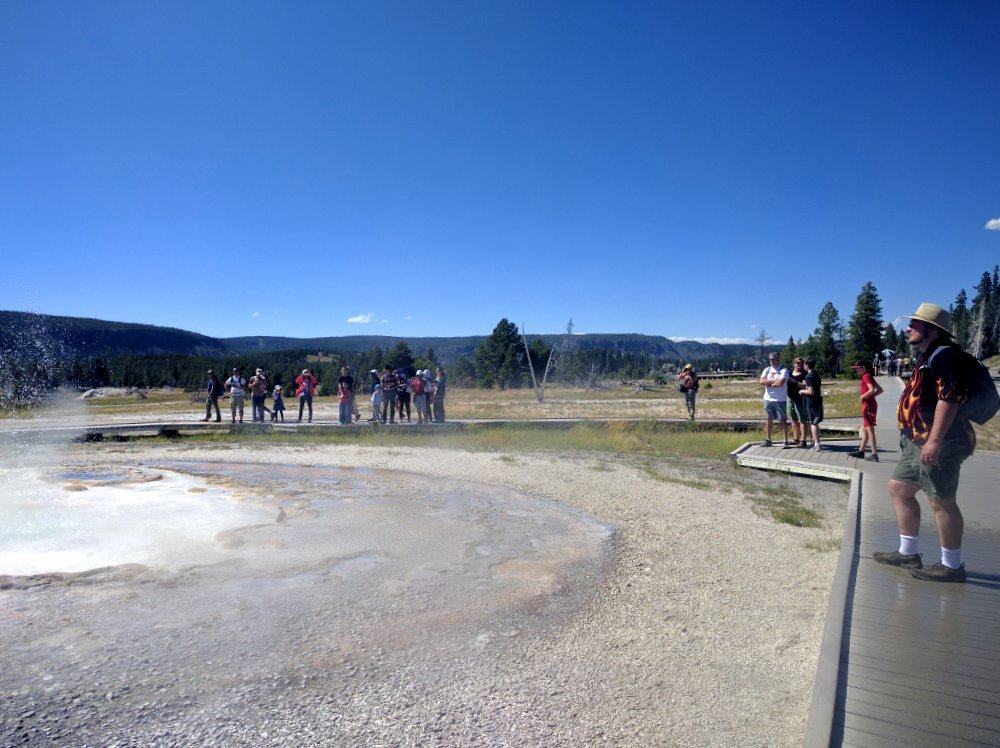 Another geyser that makes sounds, is Beehive Geyser. Its narrow cone acts like a nozzle, so the water sprays up in a powerful column at a height of 200 feet. It also has a roaring steam phase after the eruption which can be heard a quarter-mile away.

My tour of Upper Geyser Basin showed me that boiling colorful pools and amazing steaming water fountains are the reasons why Americans in the 1860s made this area the first national park. Back then wildlife animals were abundant and mountain scenery common. There are only four other locations in the world that have a large concentration of geysers, so why not protect this amazing land with its unique features. 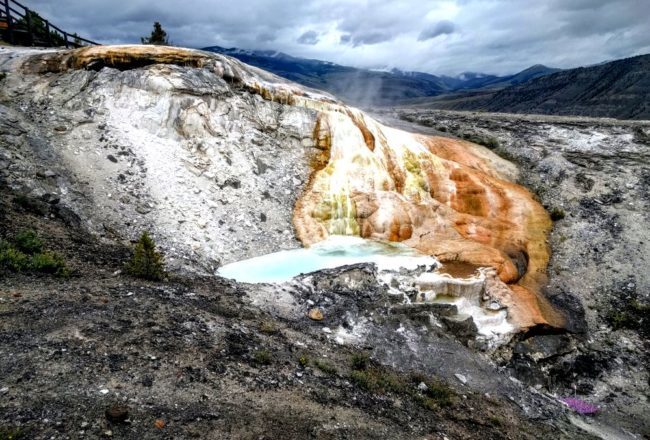 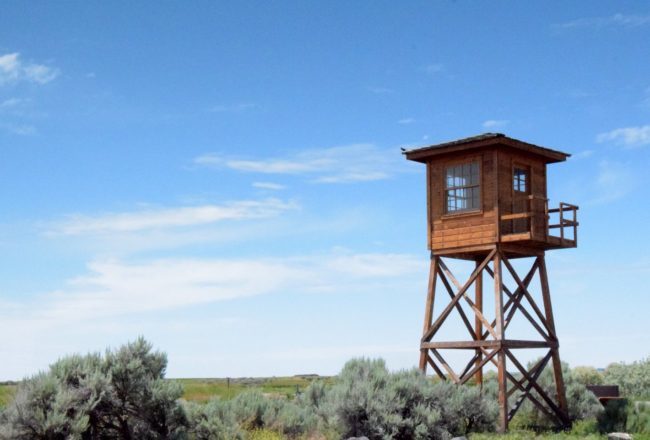