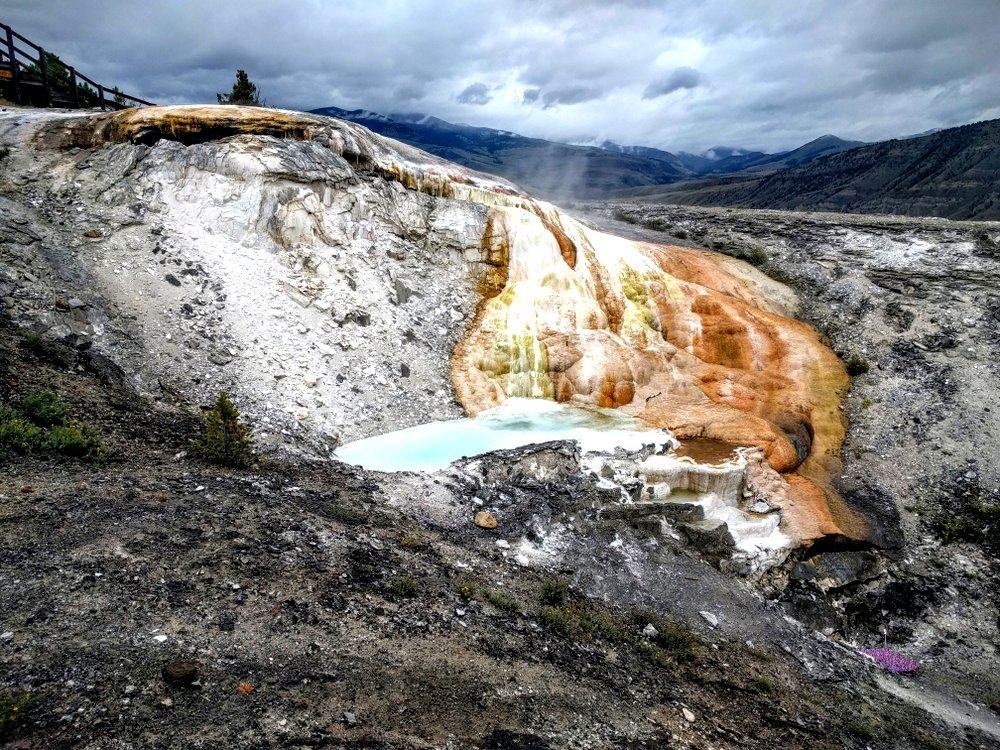 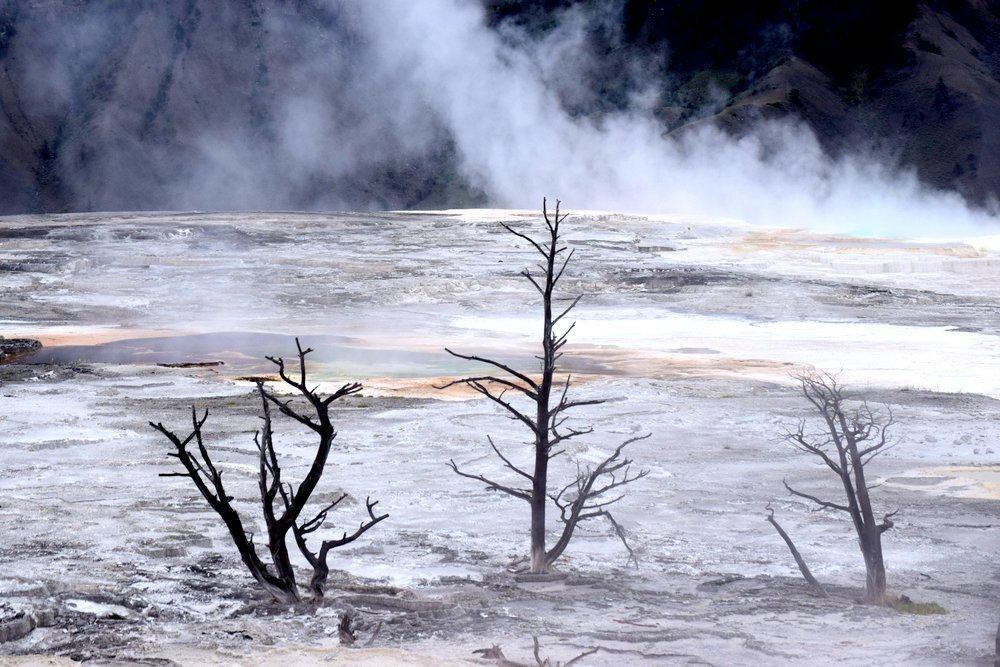 The trees that you see have thick deposits of travertine around them, basically burying them in a hot calcite tomb

Mammoth Hot Springs owes its uniqueness to sedimentary deposits composed limestone, instead of the rhyolite found elsewhere in the national park.  Named after the Morris-Mammoth Fault, this area is a network of fissures that form a system of earthen pipes filled with rainfall and snowmelt which seeped into the ground from nearby mountains. Deep within the earth, the water is heated by the Yellowstone Caldera and then bubbles up back to the surface through surface cracks. Over time minerals deposits clog the pipe system, while small earthquakes create new gaps or reopen old ones. As a consequence, Mammoth Hot Springs is always changing, even by season. 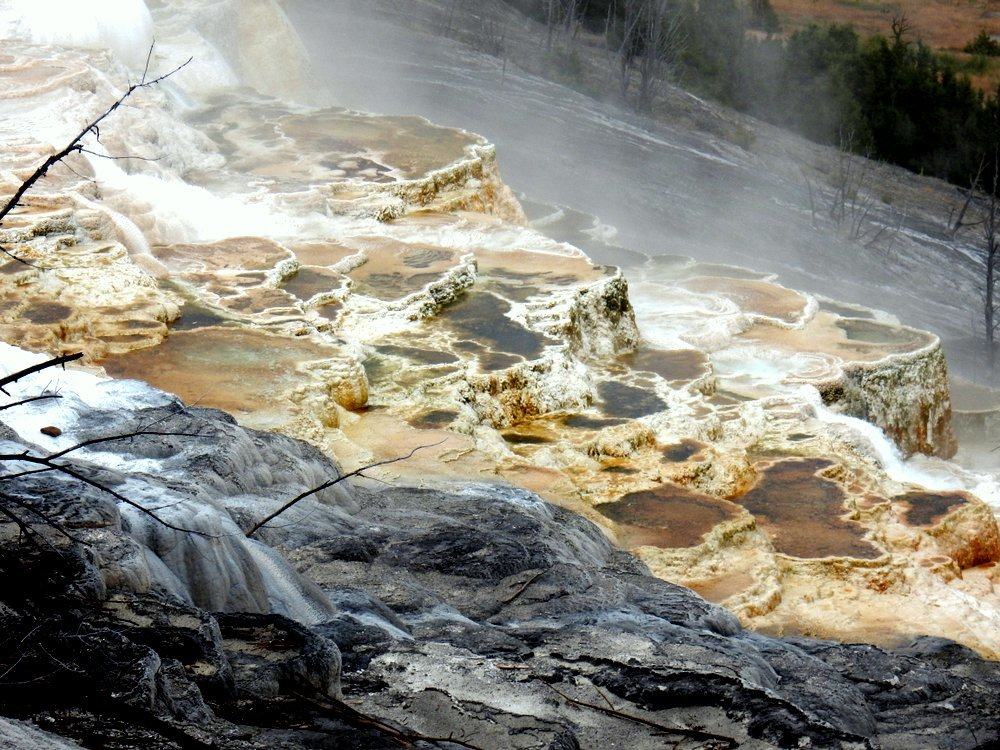 Travertine terraces – The Romans mined deposits of travertine for building temples, aqueducts, monuments, bath complexes, and amphitheaters such as the Colosseum

I was surprised at how dull much of it looked, compared to the pictures I’ve seen, but I later discovered that this is all a part of the normal cycles of Mammoth. On the Main Terrace, we passed by Minerva Springs and saw that much of the field was dry and devoid of water. The terraces were a dull gray, but I could still see the ornate travertine formations formed in multiples layers stacking upon each other. From the 1990s pictures, those gray terraces were once white with limestone deposits, giving them an appearance of sculpted alabaster. Who knows what might happen to this particular spring, in years to come. 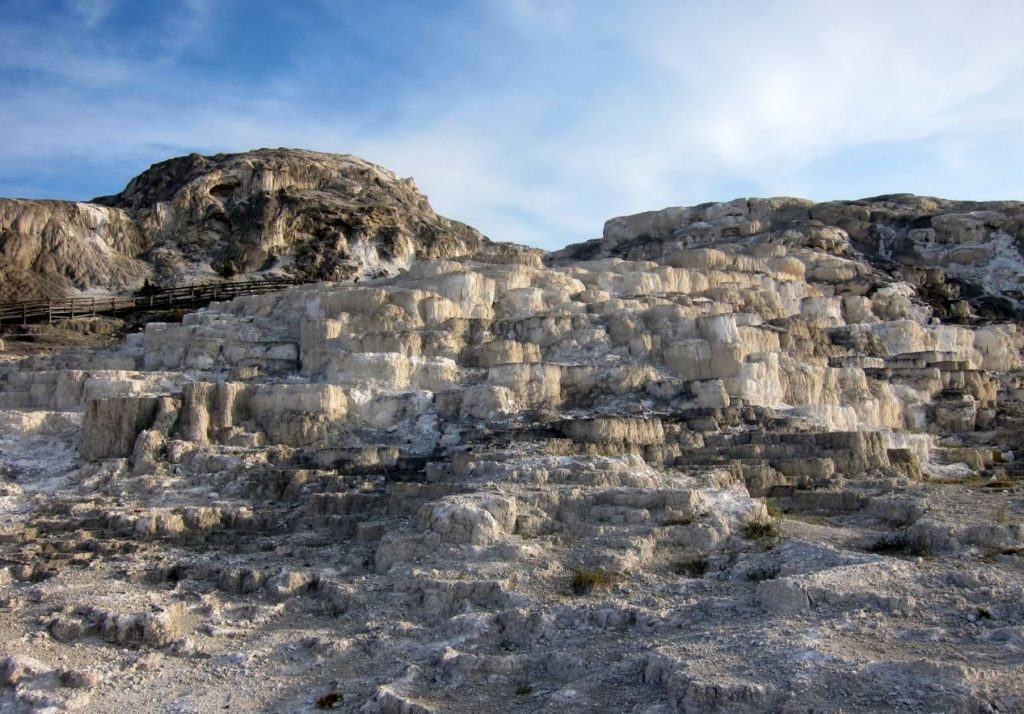 Of all its dynamic formations, Canary Spring seemed to captivate me the most. The water flowed quickly and steam puffed away into the cool air. Newly formed travertine formations are coated brown, orange, white and green. I later read that Canary Spring is temperamental and can change overnight. In 2007, the spring went dry for several days and then resumed its normal flow. Then in 2014, a new vent opened contributing to the limestone terraces I saw today. 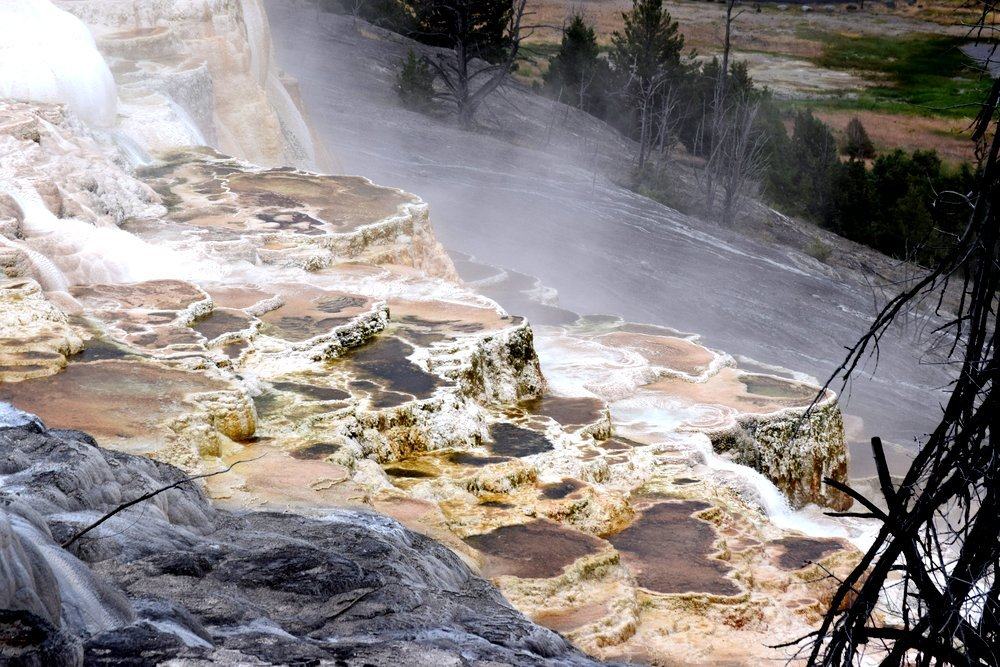 Upper Terraces Drive held a number of interesting formations which Hitch and I saw by car, but I had to stop at Orange Mound Spring with its striking colors and odd shape. The spring water flowed up from several vents along the top and side. Thermophiles coated the limestone dome paint splatters of orange, brown, and white. 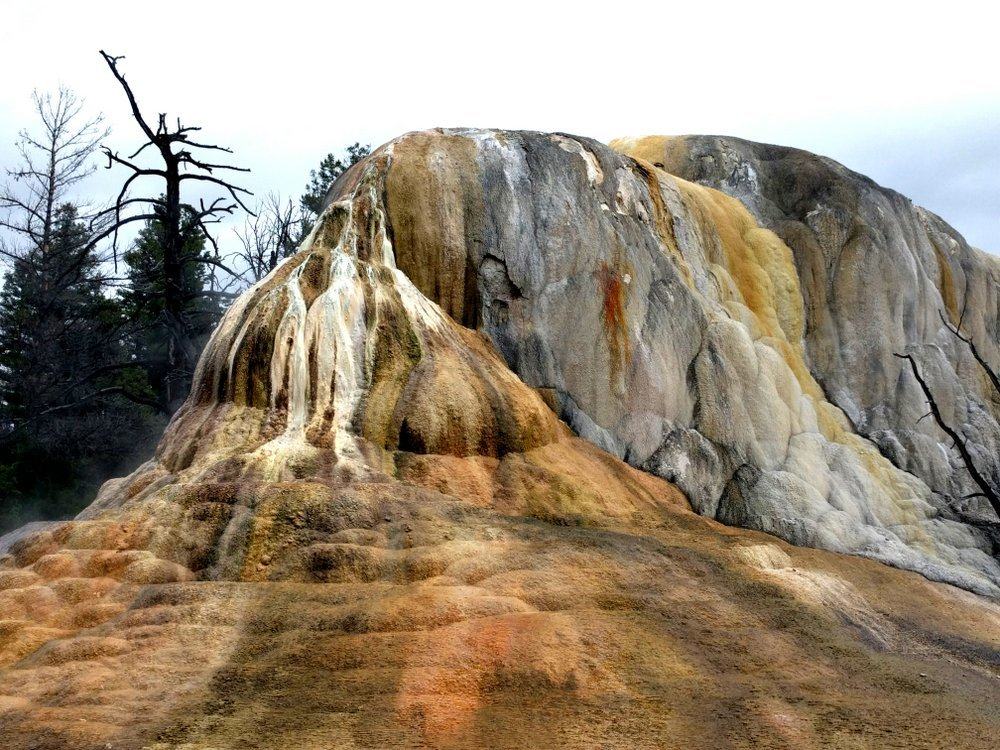 Orange Spring Mound, built up by years of limestone deposits.

In the Lower Terraces, Liberty Cap stands as a mysterious monument, which struck me as the most notable feature in the area. Nearly 37-feet tall, this hot spring cone was named for its resemblance to the peaked caps worn by French revolutionists in the 1790s. While the spring is no longer active, the cone itself formed because its hot spring plumbing remained open and in one place for a very long time.

Also near the Lower Terraces, and right next door to Opal Terrace is a Frank Lloyd Wright house built with his Prairie Style architecture. Both the terrace and Reamer’s Executive House are rather understated and are hidden behind a parking lot, but I think it’s worth a quick visit. I read somewhere that in the winter, elk like to rest on Opal Terrace due to its warm ground temperature. 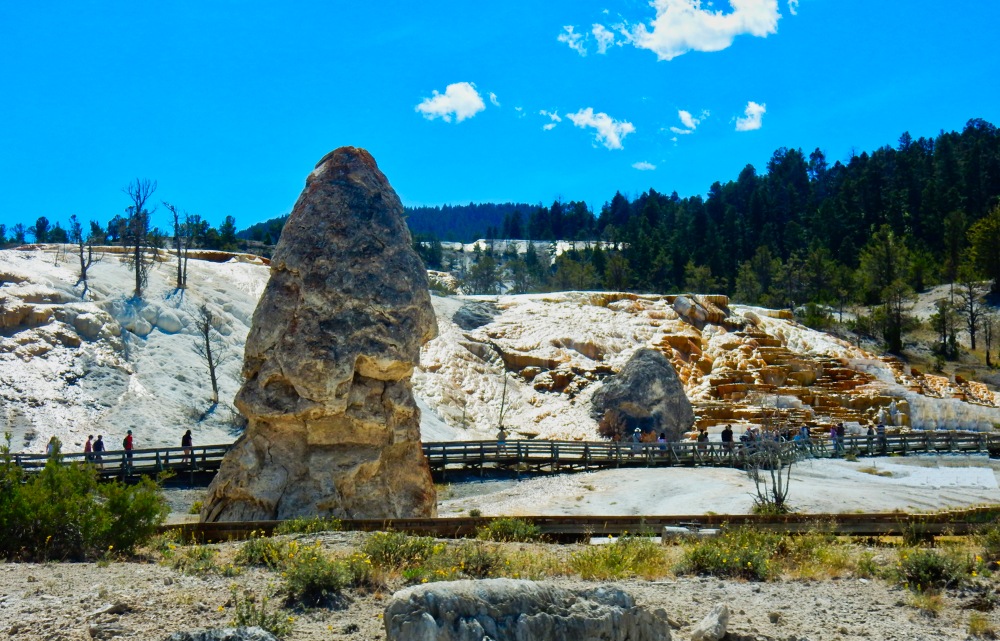 We also took a quick turn through Fort Yellowstone, a historic district which starts near the visitor center. Under threat from those who would exploit the park, US Army troops were sent in the 1880s. The fort and barracks were created to house the soldiers. Once Congress allotted enough money, they built a permanent post in 1890. The buildings today now serve as administrative offices, residences for National Park Service employees, museums, and visitor center.

Overall, the Mammoth Hot Springs a quaint area to visit, and is a prime stopover for anyone driving the Grand Loop. It has offerings for the geology geek, geyser gazer, and historical buff. A wonderful exterior expression to Yellowstone’s deep volcanic might. 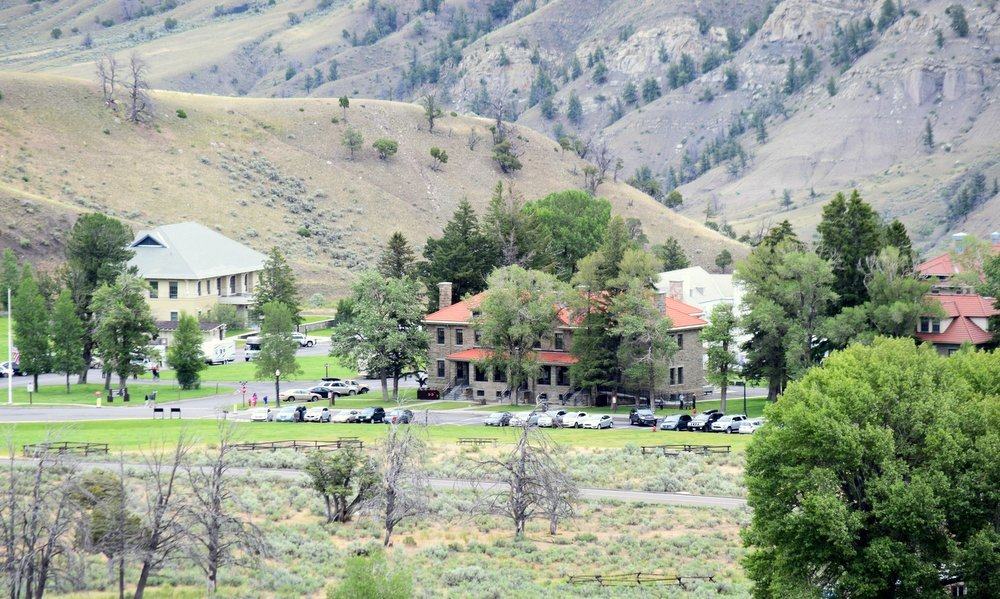 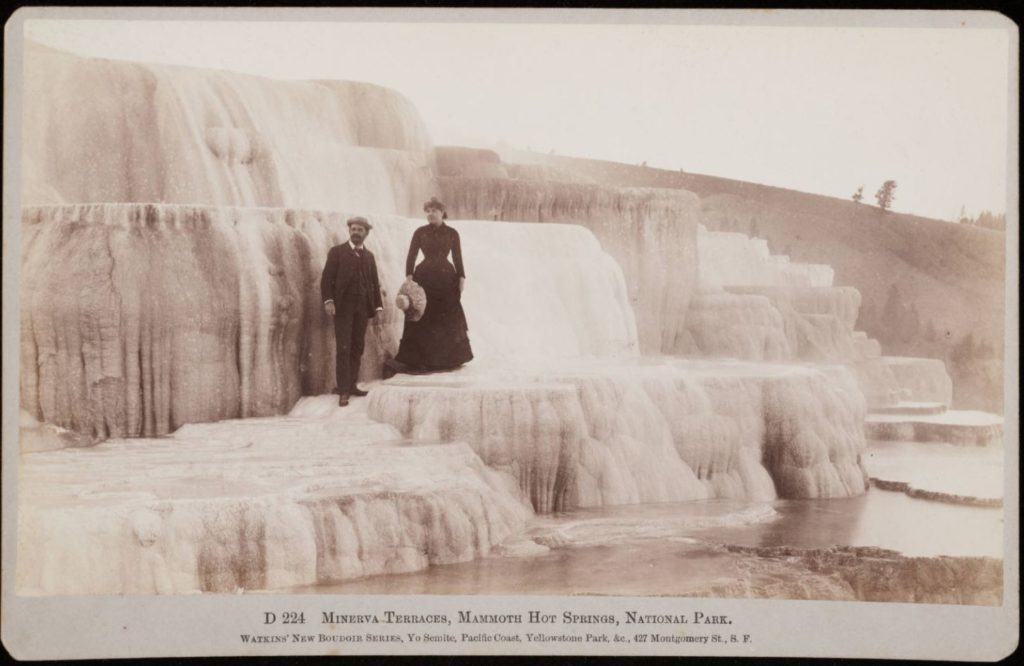 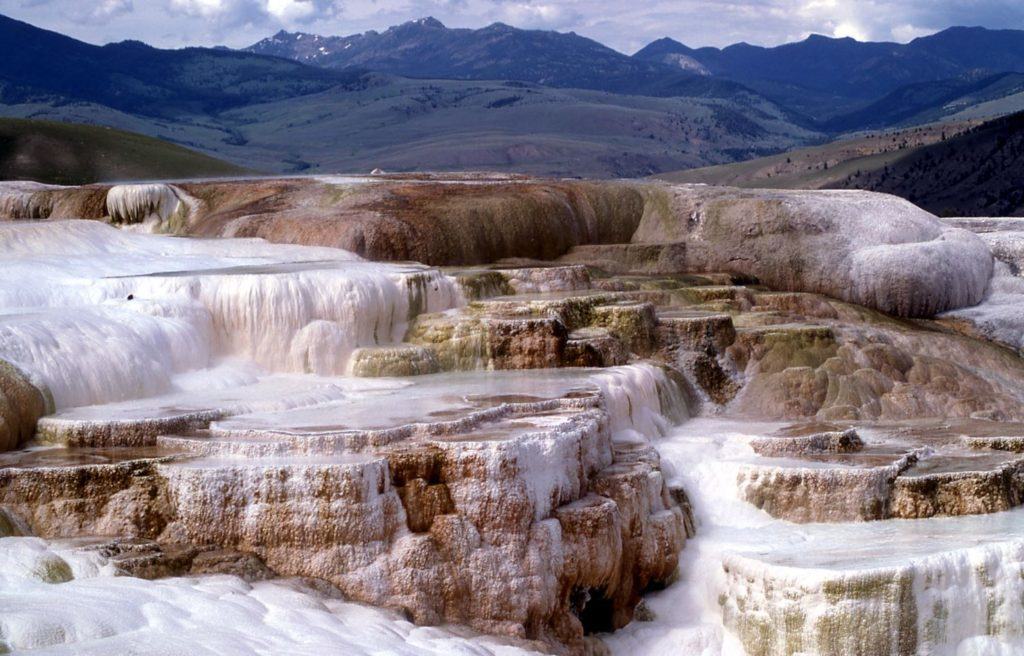 Minerva Terraces 1977 – water flowing back in the day. 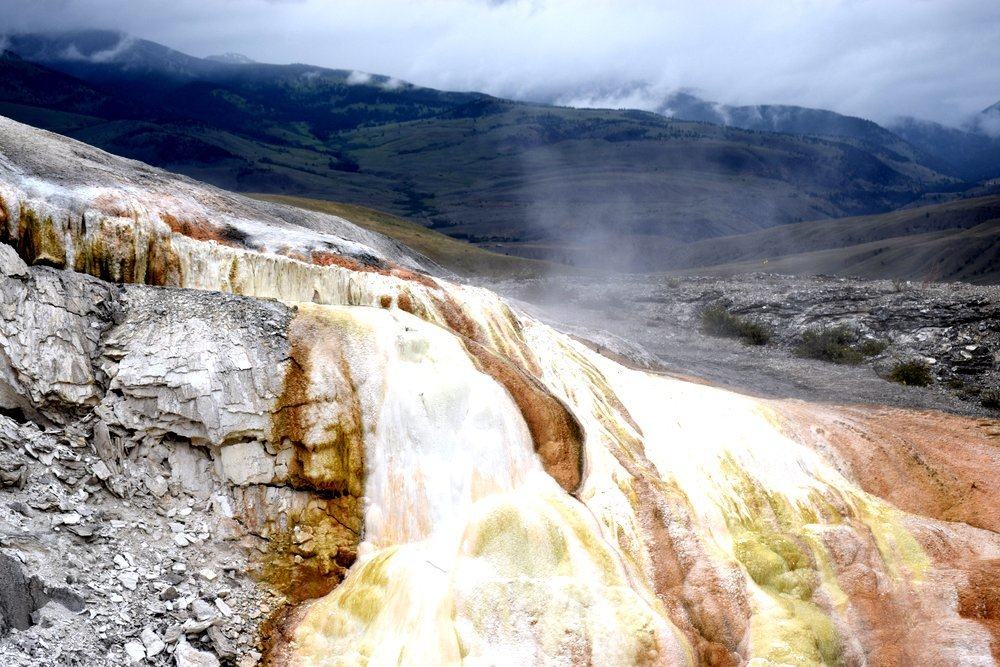 Colors of Mammoth are created by Thermophiles, heat-loving bacteria.

Grassy Spring is about a 131° F which supports the brown and orange Thermophiles. 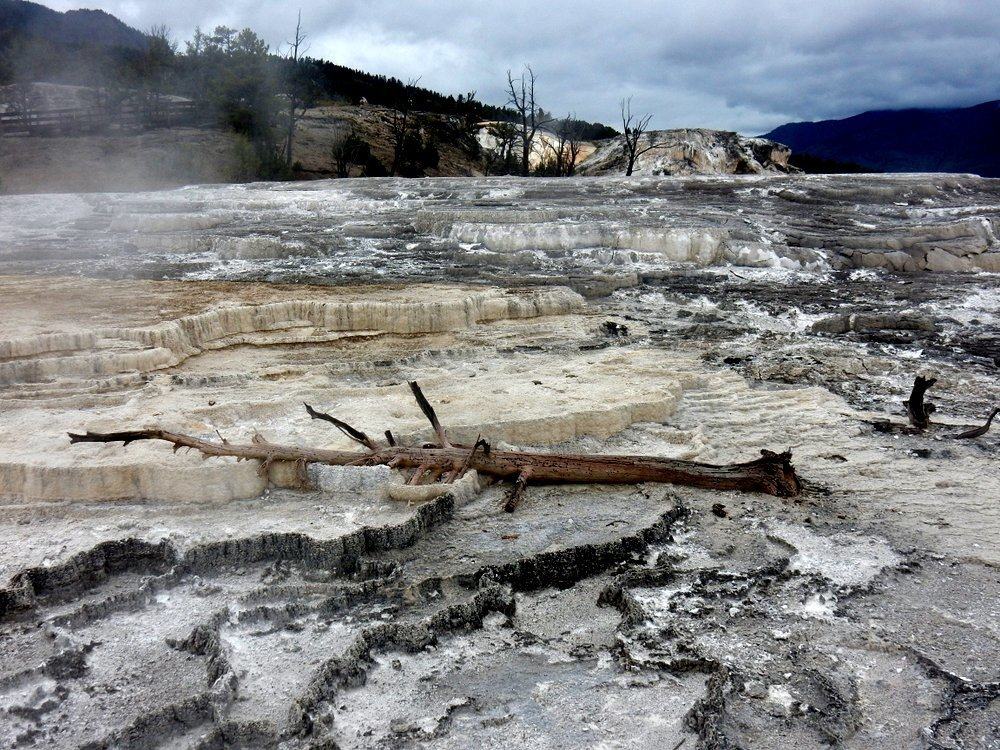 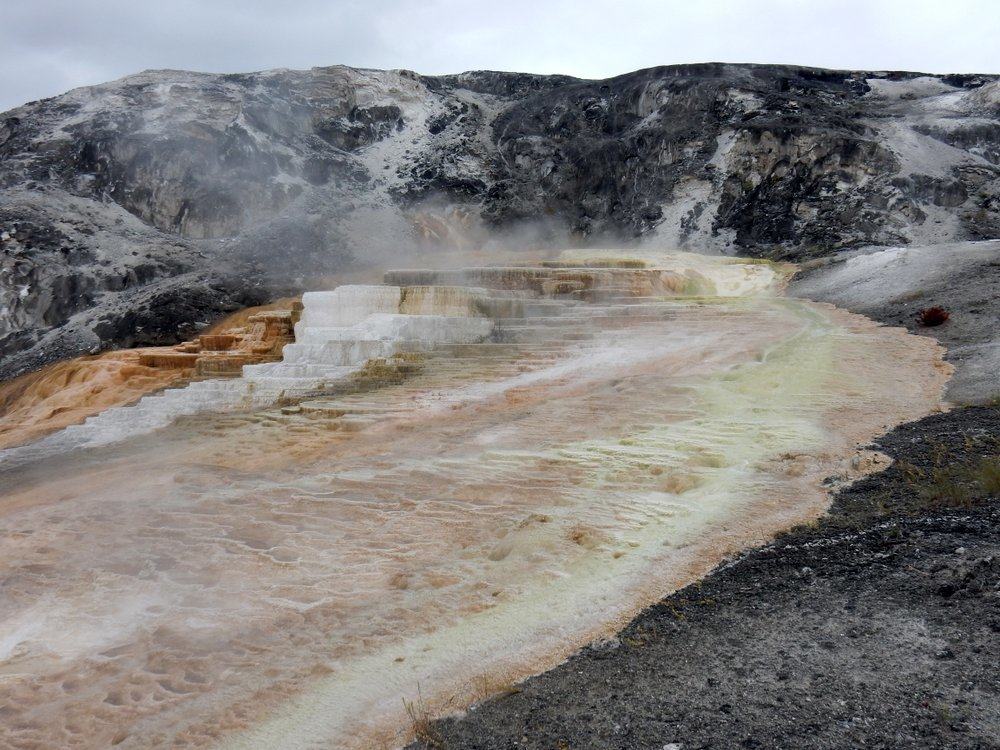 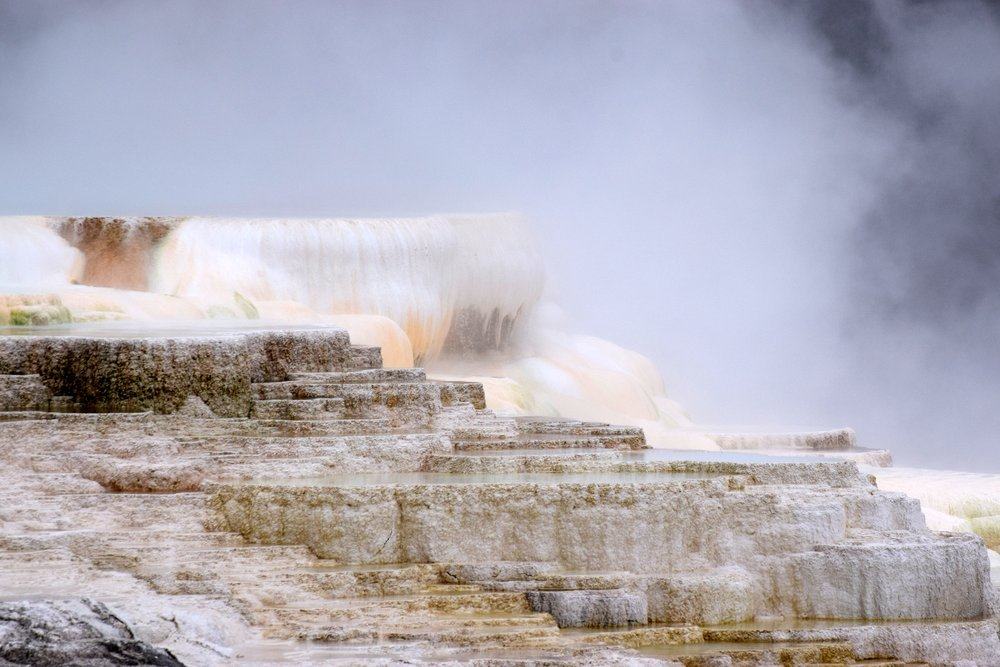 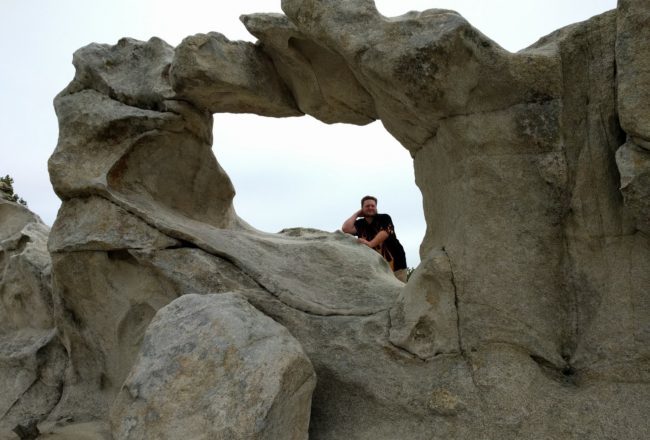 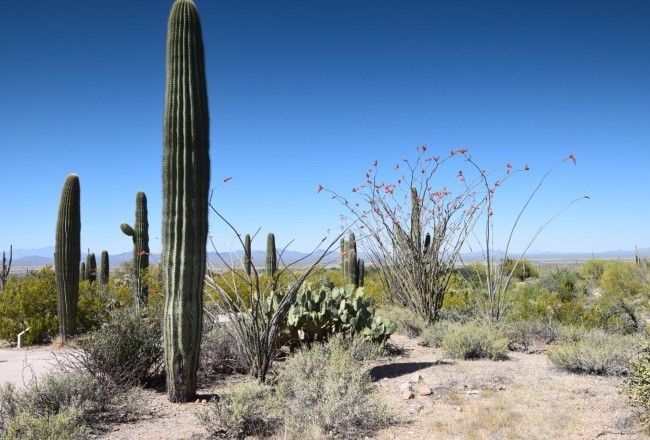