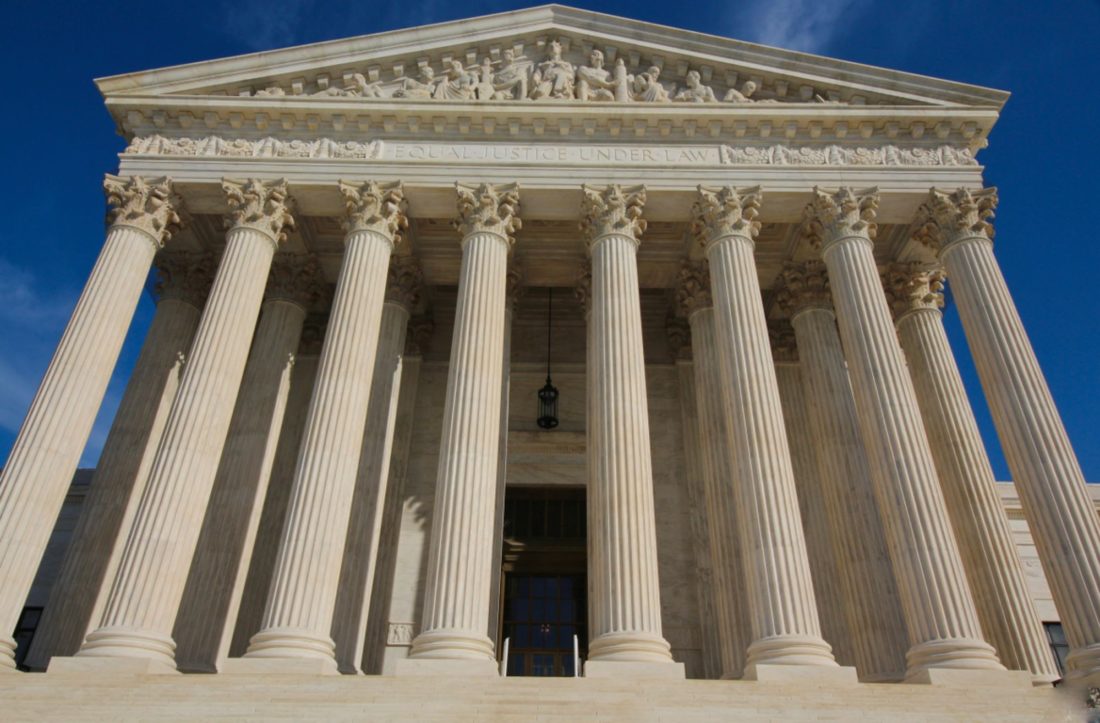 Congress let 146 years pass before providing the US Supreme Court with its own building in 1935. Prior to its current location, the court moved nearly 15 times. The court’s first home was within the Merchants Exchange Building in New York City, just a year after the Judiciary Act of 1789. From 1791 to 1801, the court lived in Philadelphia where it occupied two locations. When the court moved to DC with the federal government in 1800, it held court in seven consecutive locations before given space within the US Capitol Building. For 41 years, Supreme court session was held in the Old Supreme Court Chamber. In the following 75 years, from 1860 to 1935, the court sat in the Old Senate Chamber.

In 1929, Chief Justice William Howard Taft, (yes, the same President Taft from 1909-1913) persuaded Congress to give the court a permanent home. Chief Justice Taft then commissioned architect Cass Gilbert to design “a building of dignity and importance suitable for its use as the permanent home of the Supreme Court of the United States.”

Located across the street from the United States Capitol stands a Temple of Justice clad in white marble. Two statues straddle a grand smooth stone staircase leading up to an architrave held up by 16 marble columns. To the left sits the statue of Contemplation of Justice, and to the right rests the Authority of Law. The tall Corinthian columns lead up to the words “Equal Justice Under Law.” Just behind the columns, stand a pair of oversized bronze doors weighing 13 tons in total. Eight engraved square reliefs upon the doors depict a significant event within the evolution of Western Civilization.

In May 2010, the Court closed those bronze doors baring the public, case party members, and attorneys from using that entrance. Citing security reasons, all visitors must enter through one of two ground level doors located at the plaza level.

During our visit, we passed through the plaza doors and through metal detectors, and our items through x-ray machines – much like a TSA check at the airport. They allowed my camera, but I noticed plenty of signs saying that recording devices were not allowed in the courtroom. 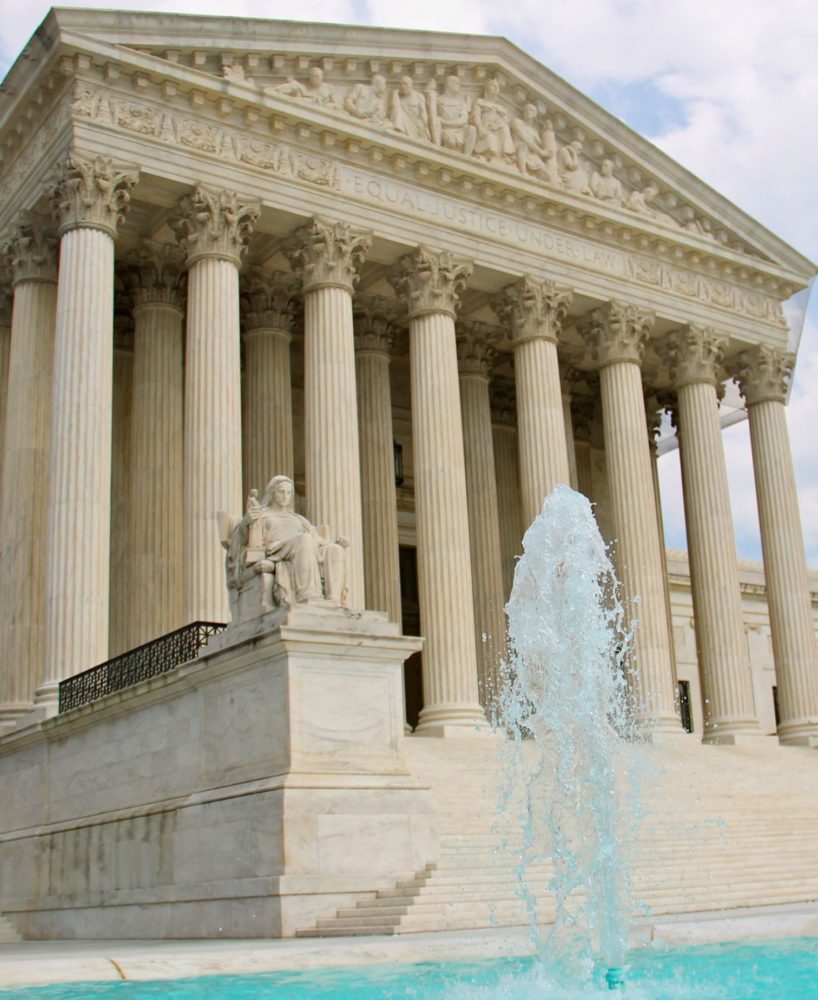 After passing security, we roam the main hall exhibit, which documents the construction of the Supreme Court Building, including architectural symbols, and of course a history of the Court’s various temporary homes.

Before entering the theater, we take a moment to view the sleek bronze statue of Chief Justice John Marshall wearing his judicial robes. We then view a quick 24-minute film, introducing us to the Supreme Court and several Justices.

Down the south hallway, we encounter a small exhibit where we learn about women of the early 1900s. The exhibit presents a history of women attorneys in the United States, starting with Myra Bradwell and Belva Lockwood, and then through the modern times with female Supreme Court Justices. Most notable artifacts within the exhibit include O’Connor’s robes and personal effects of Sotomayor.

As we make our way to the north hall, toward the gift shop and cafeteria, we occasionally stop to view several paintings and photographs of justices spanning over 150 years. 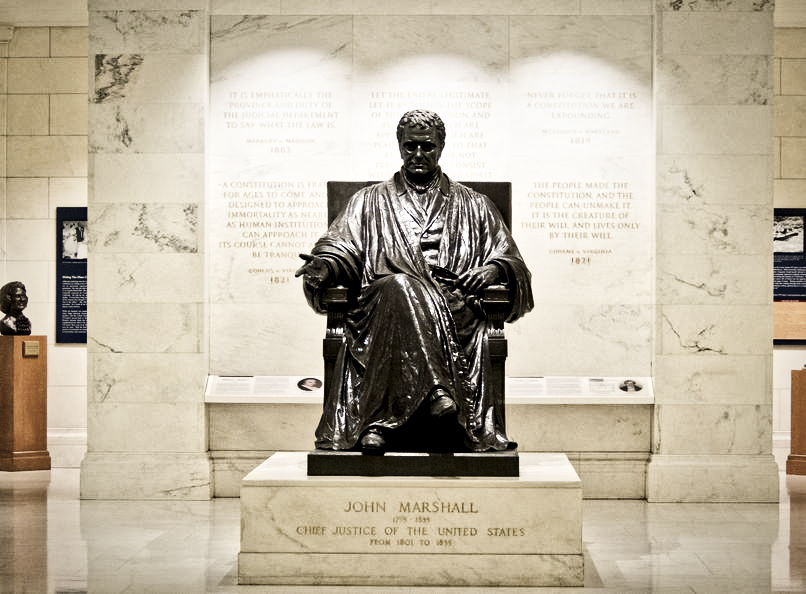 Possibly my favorite architectural feature of the Supreme Court Building are two, self-supporting, elliptical marble staircases. Each with 136 steps, the staircase holds seven spirals that ascend five stories, starting from the basement and up to the third floor. Each step is cantilevered into the outside marble wall and rests upon a step below it, eliminating the need for a central support. The spiral steps are closed to the public, but they can be viewed from two landings located on the ground floor. 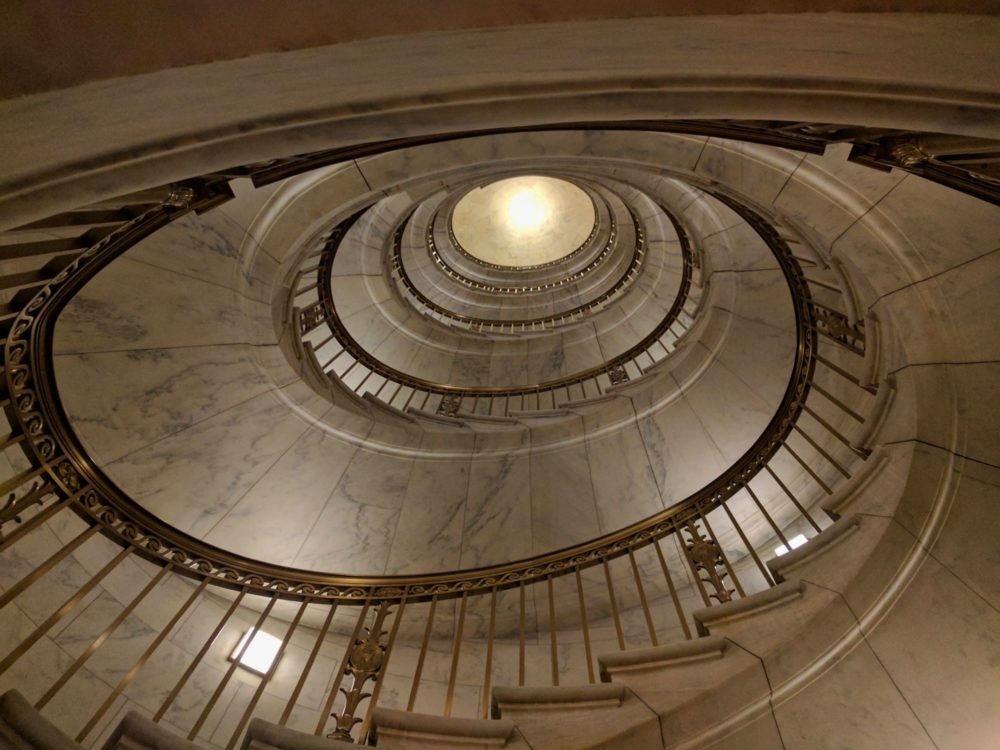 Also located on the ground floor and across the hall from the gift shop, resides a cafeteria with the most unremarkable food I’ve ever had in DC. Even though the food served at the Supreme Court Cafeteria is far from noteworthy, it does deserve a mention for its odd tradition: Each justice newcomer to the nation’s highest court must serve on the committee that oversees the court’s cafeteria.

Reviews noted in several places that the cafeteria was at it’s hight under Justice Elena Kagan when she brought in a fro-yo machine. Her predecessor, Justice Samuel Alito got high praise for adding shrimp bisque soup and hummus-broccoli combo to the menu. Sadly, the cafeteria hit an all-time low when Justice Sotomayor was fired from the Cafeteria committee after an “F” grade from the Washington Post’s review of government cafeterias. 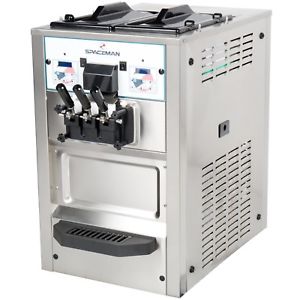 To get to the Great Hall, we climb one of two shallow sloped staircases. As we turn the corner we get an awe-inducing view of the Great Hall. A magnificent and exalted space that speaks genuinely to its temple design. Double rows of unyielding marble columns rise to a coffered ceiling covered in a grid of ornate florets. Busts of all former Chief Justices sit in alternating niches. While the friezes above the main entrance feature medallion profiles of gods and heraldic devices, known collectively as The Great Hall Metopes. 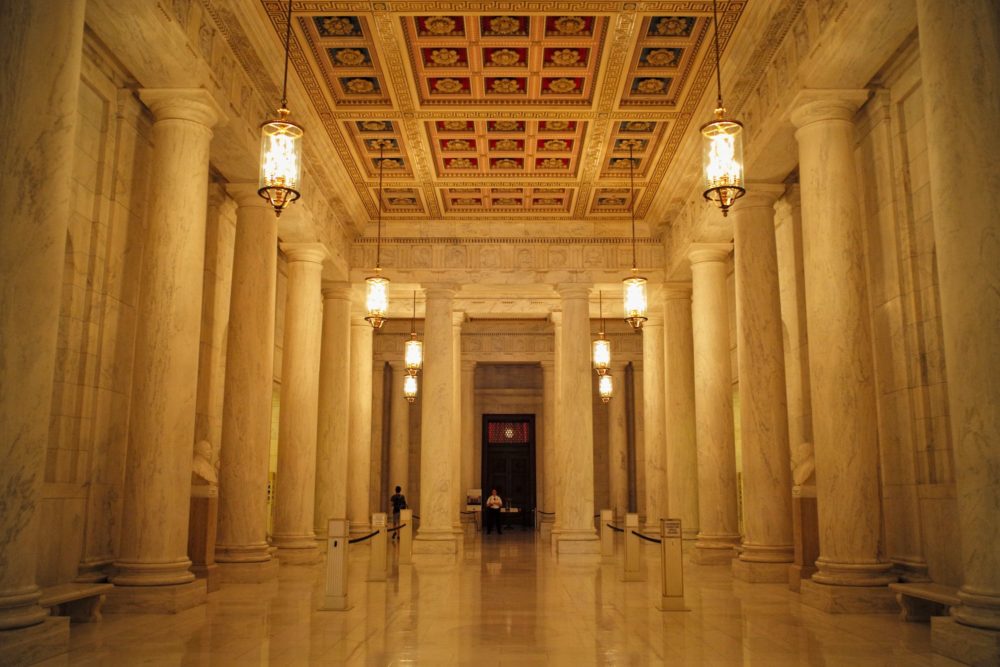 To enter the Courtroom, we enter a short queue behind velvet ropes and patiently wait to be guided in. Law clerk interns quickly guide us through the oak doors and into the court chamber. They encourage us to sit in one of the mahogany benches set for the court audience. We got a full description of where the justices and court parties sit, and all the architectural elements one could possibly find with the naked eye.

To attend a Supreme court session with arguments, you have to arrive early and be one of the first fifty in the public audience line. One of the guards suggested arriving at about 6:30 AM to wait outside because at around 7 AM a guard will issue you a numbered green card. You are only guaranteed a spot inside the courtroom if you have a green card, so don’t lose it! Once you’re in the courtroom, be sure to follow the rules for attending. If you leave the court you won’t be let back in, so be sure to go to the bathroom and eat breakfast before court starts at 10 AM. There is a kind of “waiting list” line, where people who want to attend can get into court when the session restarts after lunch. There is a catch: a person from the “waiting list” line can only enter if one of the first fifty leaves for some reason. 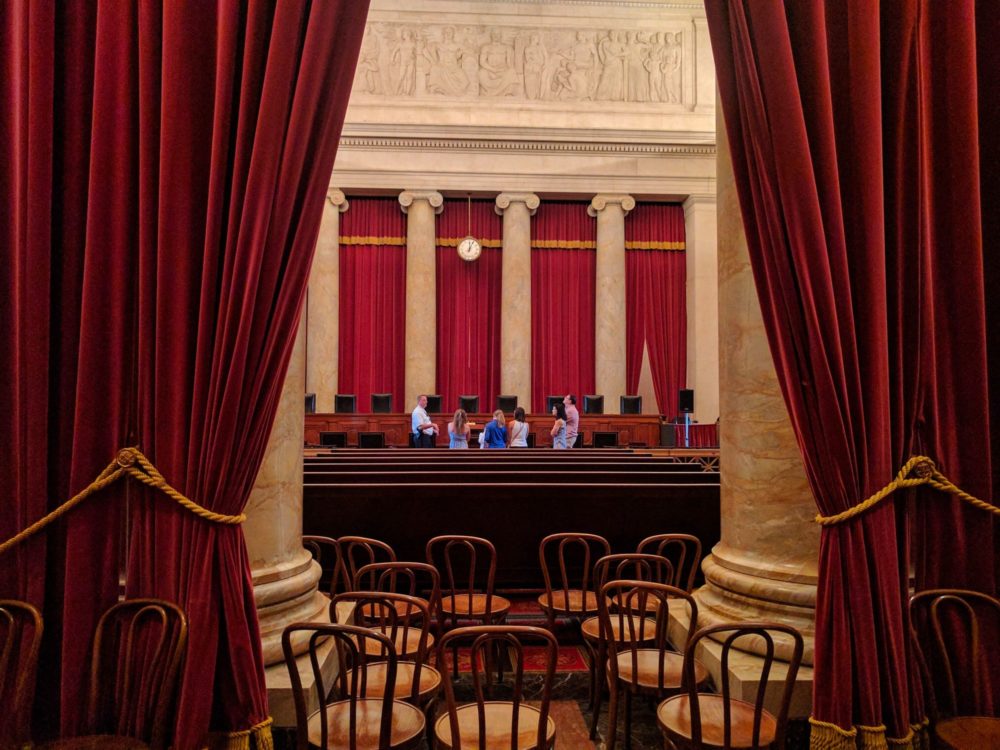 US Supreme Courtroom – cameras not allowed in the courtroom, but you can stand in the great hall with a telephoto lens and take photographs

Other Areas of the Supreme Court Building

Also on the same floor as the Court and Great hall are the private offices of the Justices. If you’re lucky to be friends and family with one of the Justices, you can get a private tour of those offices.

On the third floor are offices belong to law clerks and the Reporter of Decisions (an official charged with editing and publishing the opinions of the Supreme Court of the United States), a dining room, and reading rooms. The fourth floor houses the court library, while the fifth floor is home to the highest court in the land: a basketball court! 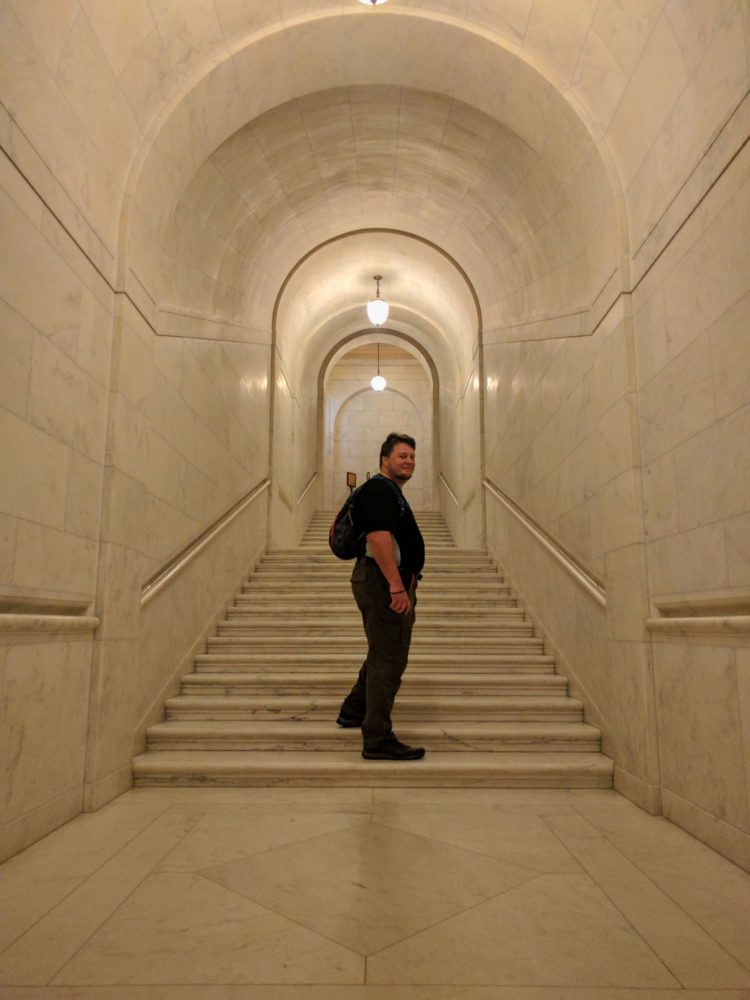 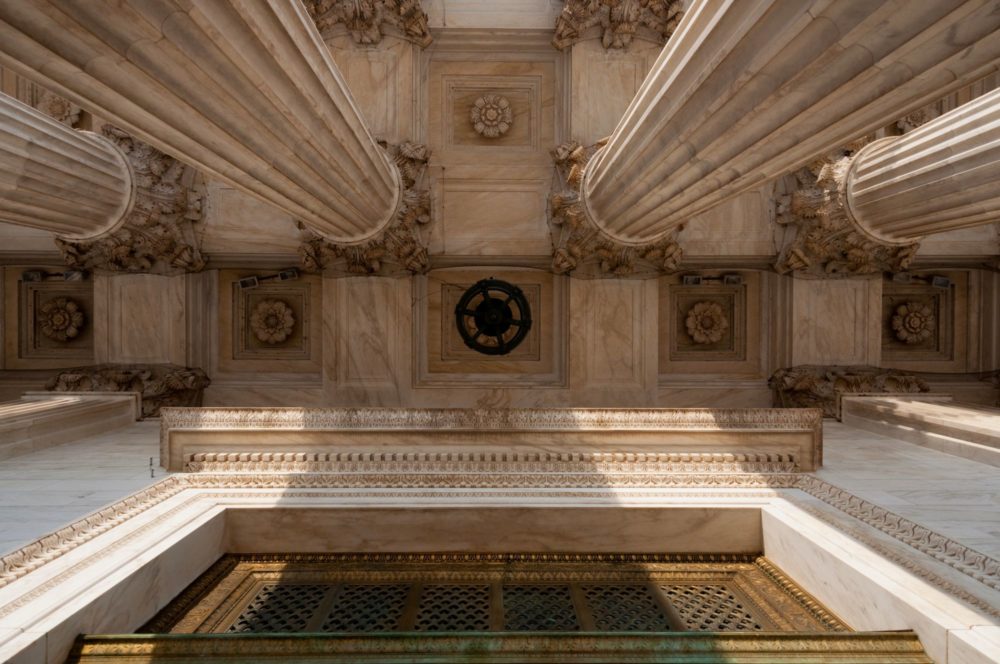 Looking up At the Front Door 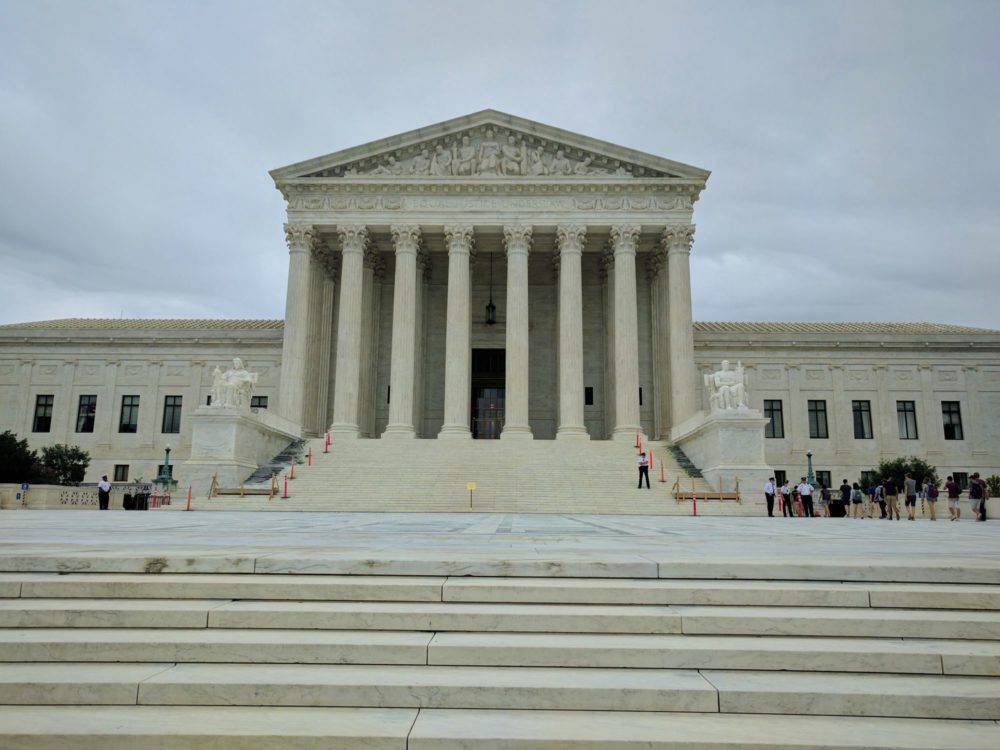 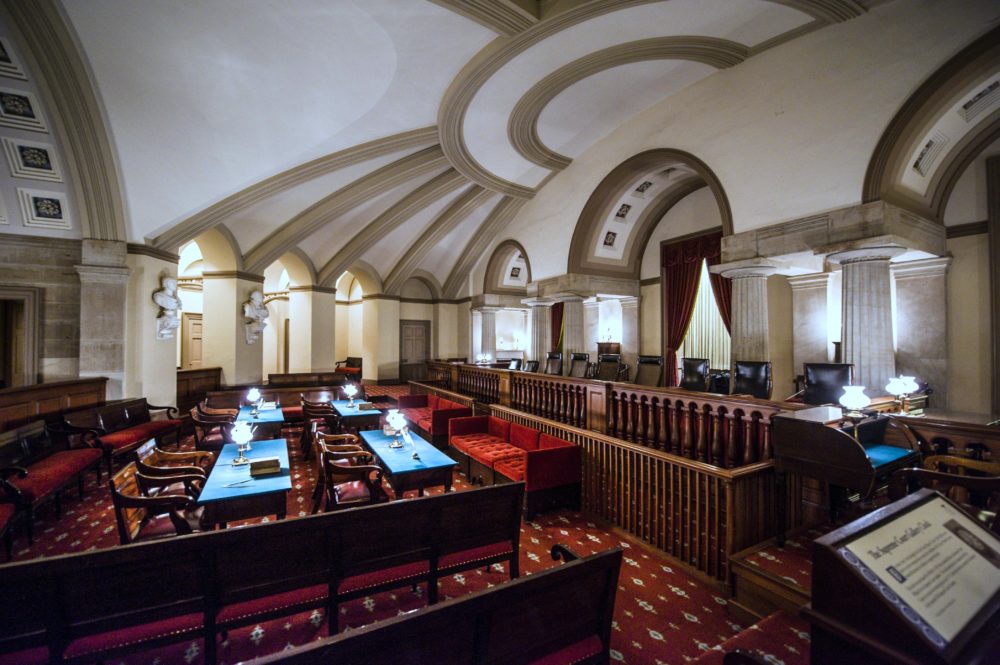 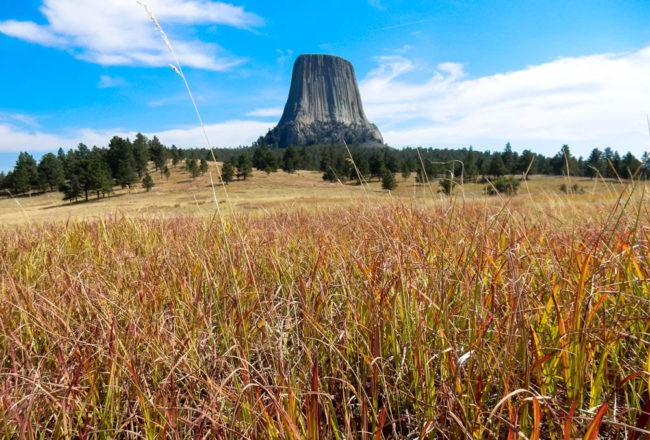 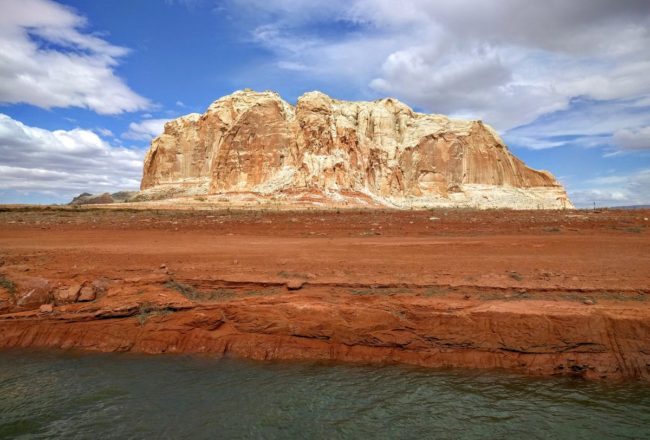 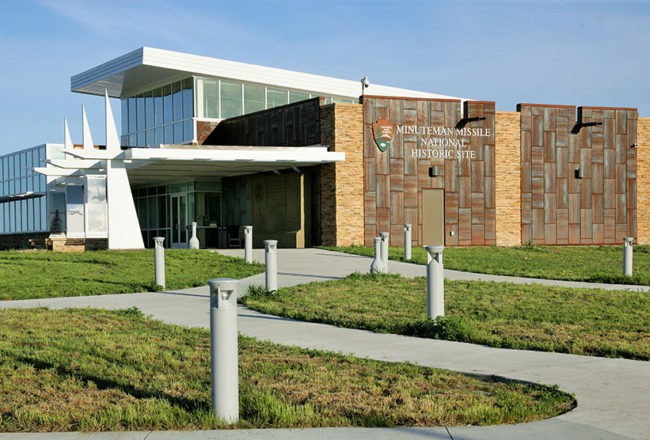