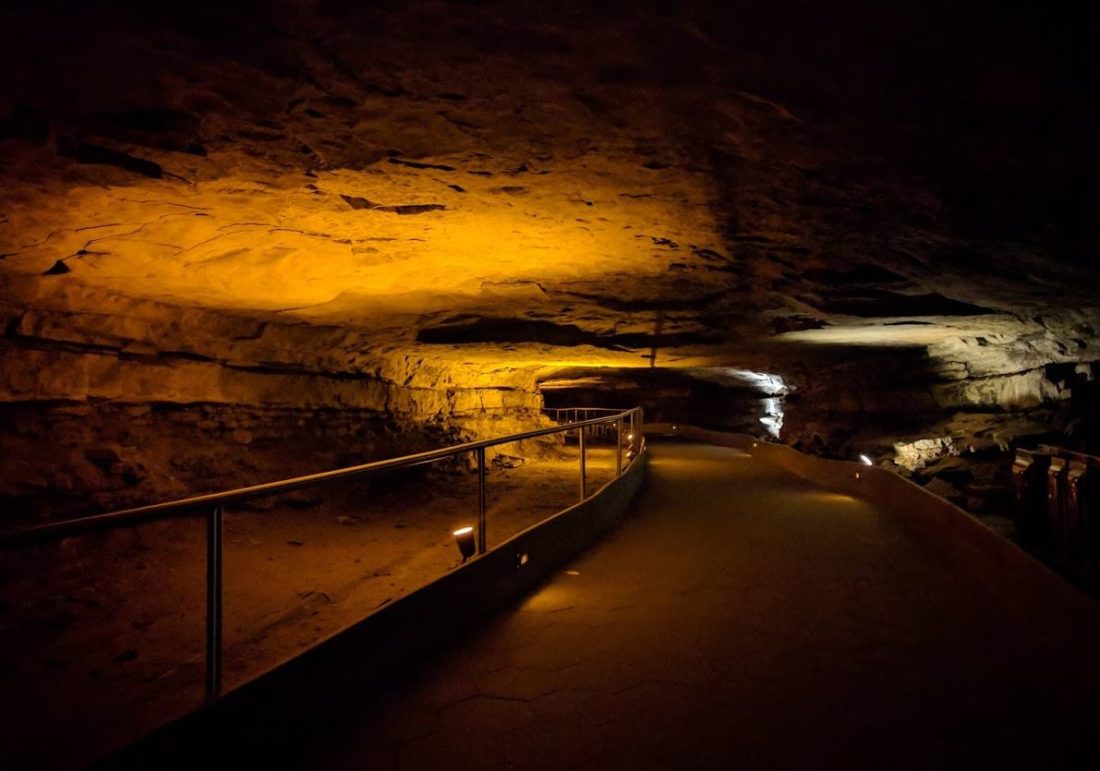 I must be honest although Mammoth Cave National Park holds the title of longest cave in the world, it is not as dramatic or as pretty as Carlsbad Caverns in New Mexico. I understand that they wish to preserve the natural habitat, but I was disappointed that many areas are restricted and are only accessible when on a reserved tour guided by a park ranger. They also forbid the use of flash lights, headlamps, or other light sources, putting a deep damper on anyone who wishes to examine historical artifacts or geological specimens in detail. In short, typical visitors will only be able to traverse a short distance and see very little.  However, what Mammoth lacks in grandiose cave formations, she makes up for in her extensive human history. For beneath these lush green hills of Kentucky, a 400-mile limestone maze holds a vast number of tales waiting to be told within its murky shadows. 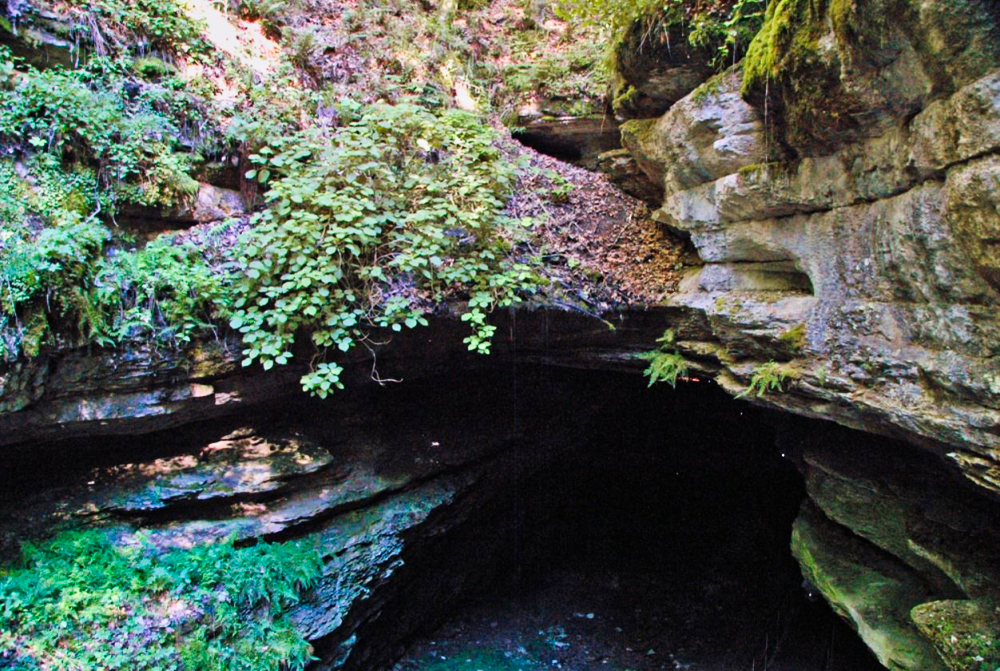 Before humans came upon the scene, the earth held its own fantastic and epic tale. Beneath the rolling woodlands, sandstone-shale rock caps a thick limestone-strata, which was laid down during a time known as the Mississippian age by geologists — some 360–230 million years ago. The sandstone-shale layer acts as an umbrella over the limestone bands. This caprock is relatively hard for water to penetrate, except where vertical cracks in the rock layer occur. As water penetrates the protective layer, sinkholes form where surface water can continue downward slowly eroding the limestone layer into a honeycomb caverns. Mammoth Cave’s limestone is made up of many different layers, each with its own characteristics. As the underground water moved through lower and lower levels, each limestone layer produced a different path of flow, resulting in numerous interconnecting passageways and the formation of Mammoth Cave System.

Humans have frequented Mammoth Caves for thousands of years, a mere blip in her geological ancientness. The oldest evidence found comes from over 4,000 years ago when ancient native peoples explored and mined the upper three levels, leaving behind artifacts of their prospecting efforts. For roughly 2,000 years, they and their descendants excavated for earth minerals perhaps used either for medicine, building materials, or even paints.

In 1935, Civilian Conservation Corps workers discovered the remains of one such ancient native miner. With light no brighter than what was given off from a cane torches, they discovered mummified remains dating back to 400 BCE.  His body pinned beneath a six-ton boulder, and his ancient tools of his trade close at hand. Constant cave temperatures and humidity, combined with the nitrate salt in the soil, preserved the body so well that remains were extracted pretty much intact. In the surrounding area, additional artifacts were discovered, including gourd bowls, mussel shells, cord, pottery, woven cloth – even a handful of petroglyphs.

Let’s pause and think about that for a moment: around 400 BCE, as the Roman settlement of London formed into a small city, these native American ancestors were mining Mammoth Cave! 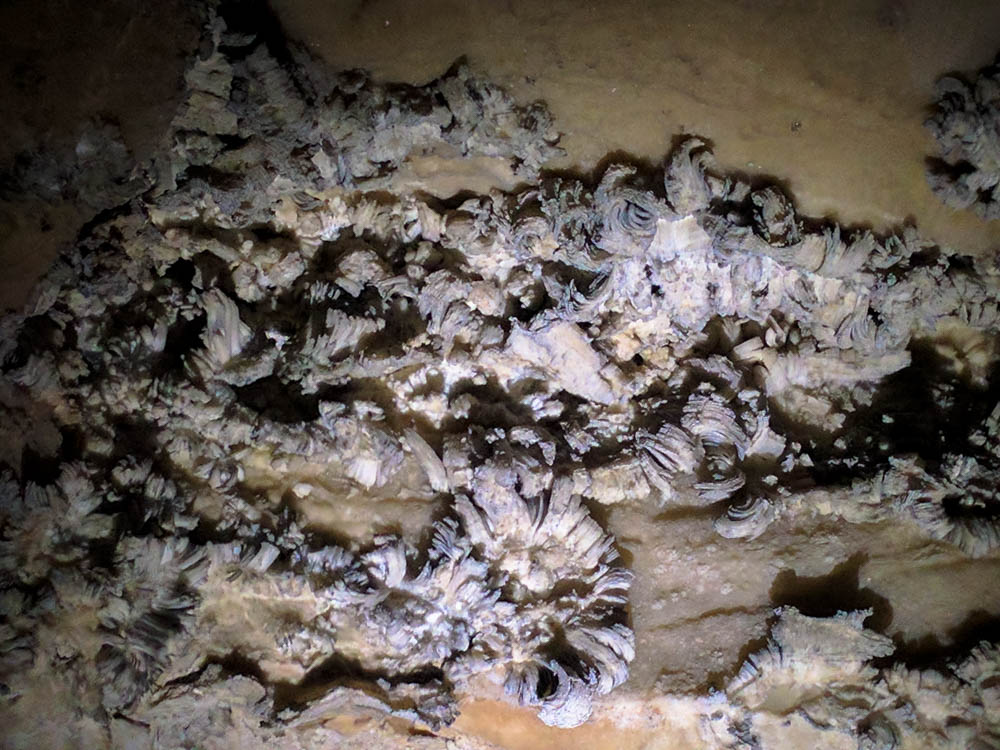 European settlers soon found their way to Mammoth Cave, the first being those of the Houchin family in 1798. Legend says John or Frank Houchin wounded a bear on a hunting trip. They pursued the wounded bear to the cave’s large entrance opening near the Green River, which today is known as the Historic Entrance. The story goes on to say that the bear turned to attack, and one of the two brothers ran into the cave for protection from the charging bear. 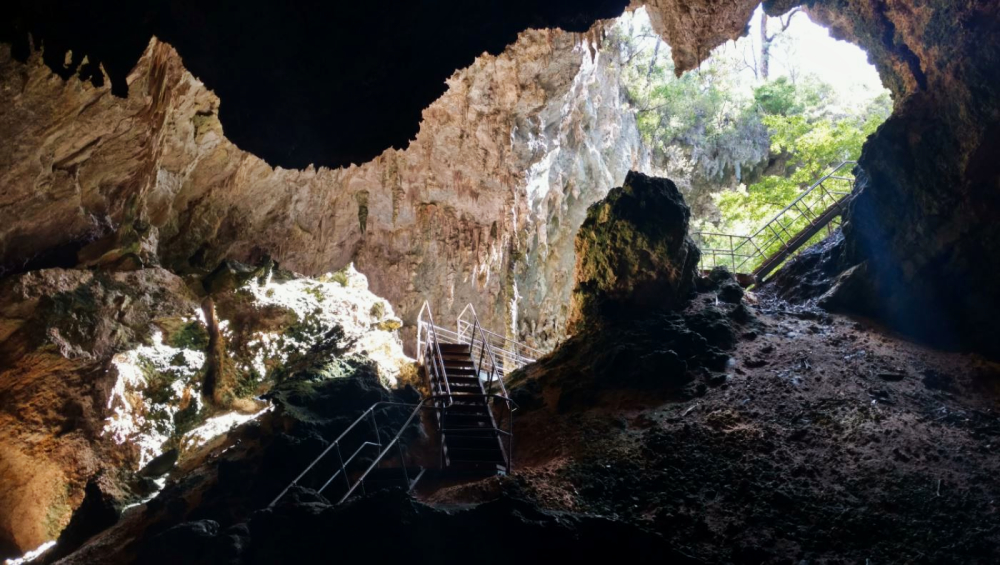 When the British blockades prevented trade to American Ports, Mammoth Cave’s saltpeter reserves were crucial to America’s gunpowder productions. At its peak, excavators extracted calcium nitrate on an industrial scale, all the while giving tours to anyone who would pay a penny.

The cave owners used approximately 70 African American slaves to mine the precious mineral. Slaves collected dirt from different cave passages, loaded it aboard ox-carts, and then hauled it to leaching vats located both at the Rotunda, the large chamber a short distance from the Historic Entrance, and Booth’s Amphitheater, near the entrance to Gothic Avenue. When the tanks were filled with dirt, gravity-fed surface water brought in on wooden pipes would flood each vat, dissolving the calcium nitrate from the soil. As the water drained into troughs beneath the vats, another set of pipes would draw the calcium nitrate solution to a collection tank, and then hand-pumped back out of the cave on a final and third set of pipes. Once at the surface, slaves leeched the solution through wood ashes in another set of vats, and then finally boiled until saltpeter crystals formed. From there the crystals were packed in barrels and then shipped to gunpowder manufacturers in the East Coast. 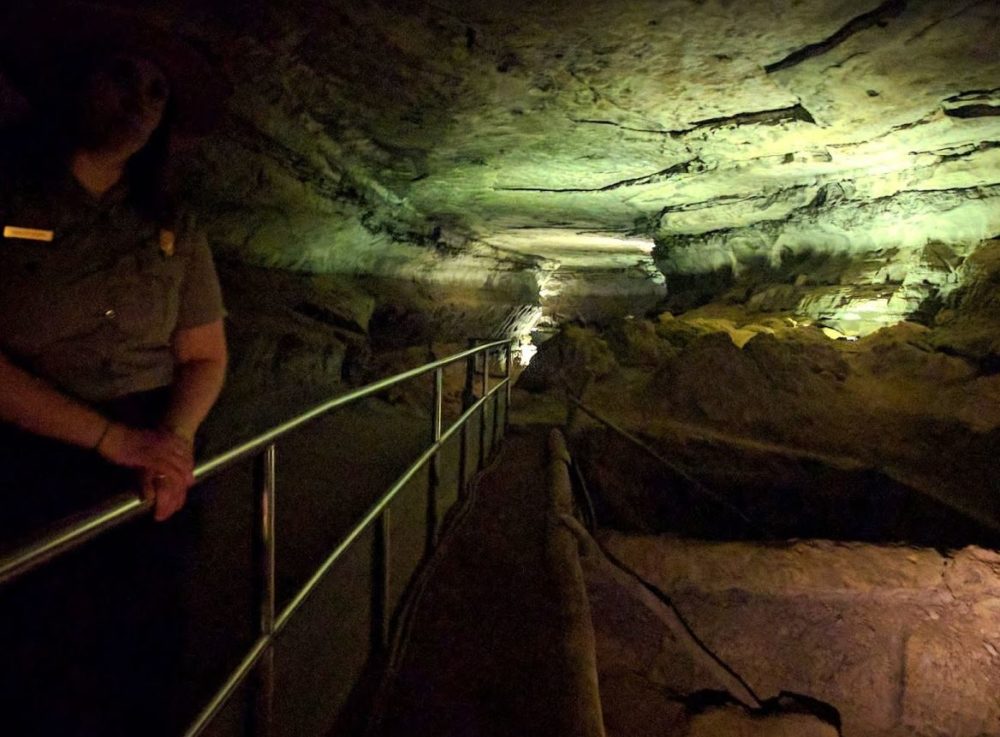 The Slave Who was a Tour Guide

After the War of 1812, demand for saltpeter waned and mining efforts quickly abandoned. In comes Franklin Gorin, who bought the cave in 1838 solely for tourism purposes. In the following years, Gorin would use his African American slave force as Mammoth Cave tour guides. Stephen Bishop, one of those slaves, would provide valuable contributions to the exploration on the mapping of Mammoth Cave and thus become a celebrated historical figure.

Through the 1840s and 1850s, Stephen Bishop was one of the first people to extensively map the cave. As he explored and mapped, he named cave features using half-homespun American, half-classical terms, such as the River Styx, the Snowball Room, Little Bat Avenue, and Gorin’s Dome. He discovered odd blind fish, snakes, silent crickets, cave bear remains, and ancient Indian gypsum workings.

During Bishops time, the farthest anyone explored was to the Bottomless Pit: a massive hole of darkness which no lantern light could penetrate. One day Bishop and a guest braved the pit by extending an old ladder across the gaping maw. After a slow traverse, the men discovered whole new part of the cave. Following that, Bishop discovered a river and the eyeless fish that swam within.

Today that river is known as the River Styx and the fifth-generation descendant of another slave guide, Ranger Jerry Bransford, gives seasonal tours to a small portion of that area. 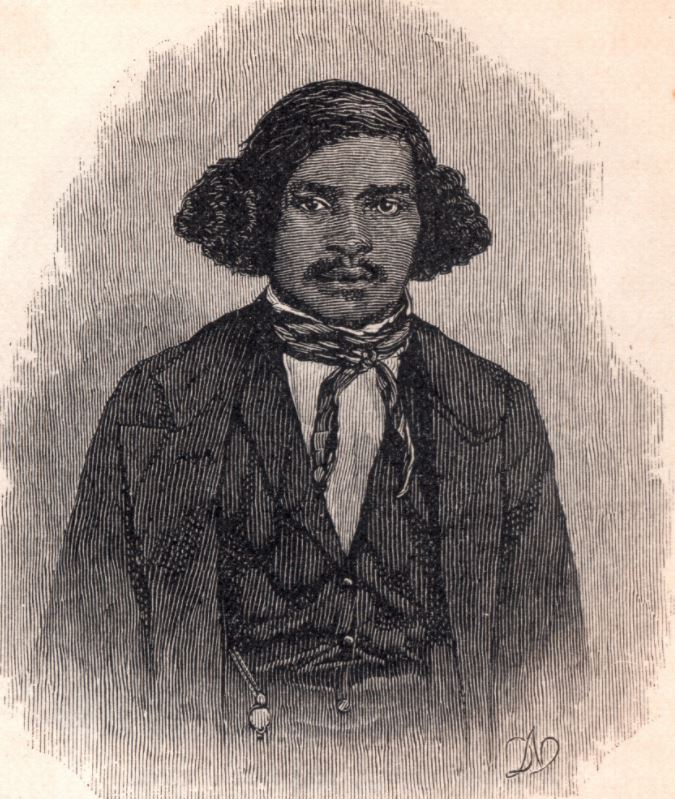 Mammoth Cave is not only the longest cave system but is also the oldest touring cave, dating back to 1816. In the 1920s, at the dawn of the automobile vacationing era, a war to attract tourists climaxed. Starting in 1921, a Louisville oil driller named George Morrison bought neighboring land and forced another opening into the Mammoth Cave system. He set up shop on Flint Ridge and advertised his cave as the “New Entrance to Mammoth Cave.” Soon other entrepreneurs followed suit and full-on combat commenced among all the caves in the Flint Ridge area, including Crystal Cave, Great Onyx Cave, Short’s Cave, Long Cave, Indian Cave, Salts Cave, and Colossal Cave.

Cave owner opponents went to underhanded lengths to lure unsuspecting tourists to their subterranean cash-cows. Misleading signs along the roads from Cave City to the Mammoth Cave stole tourists away from the intended destination. Fake policemen rerouted cars, hired thugs burned down ticket huts, and false advertisements tricked visitors into believing that Mammoth Cave was closed or quarantined.

Many of the Flint Ridge caves were later incorporated into the National Park Movement in 1929 through 1941, as they were verified as true extensions of Mammoth Cave. But even after official Federal integration, charlatans for numerous commercial caves impersonated Rangers, diverting travelers off the road before they could reach the national park. Those tours still exist today as separate caves.

Birth of a National Park

Thanks to the National Park Service and the Rangers working at Mammoth Cave, I was able to learn a great deal about the cave and history. Another great source of cave lore is the Western Kentucky Univerity’s Department of Library Special Collections which contain additional accounts, historical maps, and numerous photos from visitors, employees, and past owners connected with the cave. And if you are wondering, there are no fossils of woolly mammoths found within the cave system, just be sure to ask a real Ranger why it’s named Mammoth Cave. It’s their favorite question. Just don’t tell them we told you that! 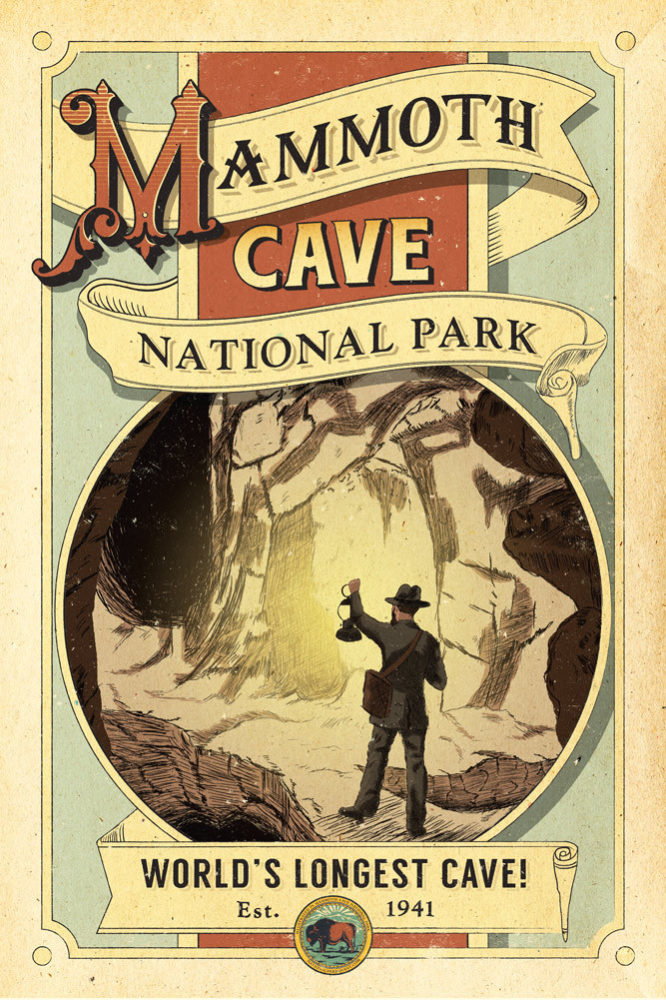 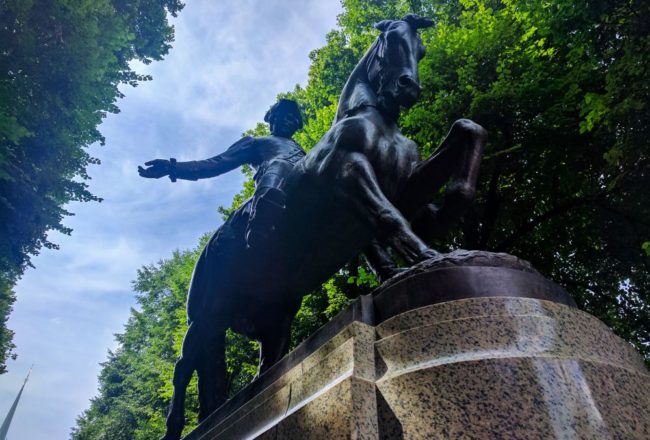 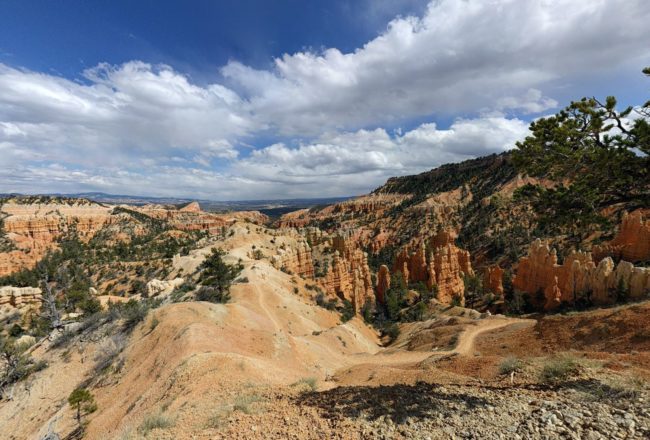 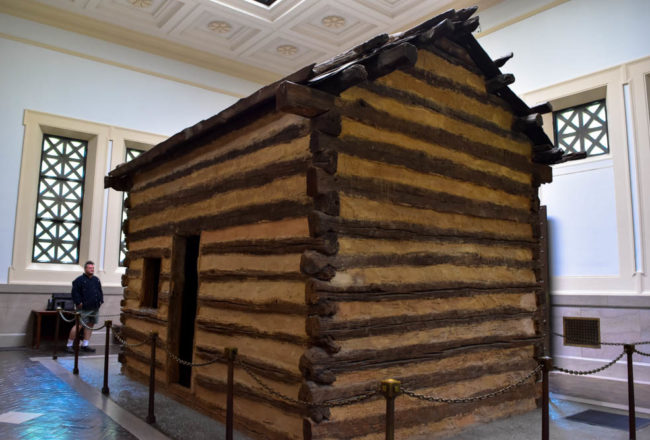