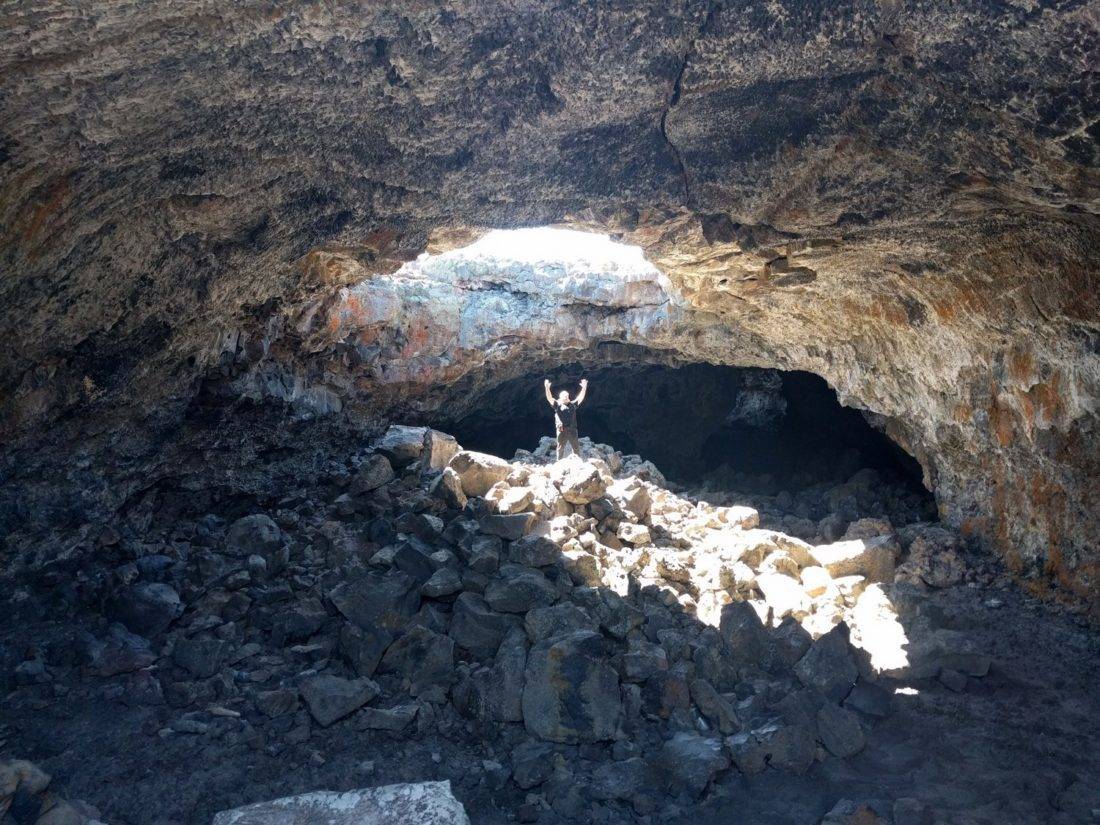 Craters of the Moon National Monument has a lot of caves: over 400 documented with the discovery of more caves each year. The most common cave type are Lava Tubes, which form when as an exterior crust of a lava flow cools, and the interior lava continues to flow within. There are five caves that are easily accessible within the park. The rest need either a backcountry permit or 4-wheel drive to access. The second most common are Fissure Caves, located within the deep earthen cracks of the Great Rift. Some of these caves run deep, the deepest is recorded at a depth of 650 feet from the surface. The most notable ones are located in the Kings Bowl Lava Field but require professional caving equipment and knowledge for safe exploration. The last kind of cave found in the monument are Differential Weathering caves, which formed as wind, rain, and frost hollowed out the earth. They are hard to find, and the one I read about isn’t even named and can only be reached by rangers.

Long panorama of inside Indian Cave, Craters of the Moon National Monument & Preserve

Bats in the eastern United States and Canada are dying off in frightening numbers from white-nose syndrome, a condition that leads to death from exposure to a fungus. Humans have immunity to the fungus, but sadly bats die quickly from it. In order to help the bats that live in the caves, obtaining a permit is required before entering the caves. The permits are free, but they want you to be aware of the problem and not bring any gear used in another cave outside Craters of the Moon. It’s best if you leave that gear at home before visiting, or decontaminate it properly by thoroughly washing your gear with either bleach or 3% hydrogen peroxide. 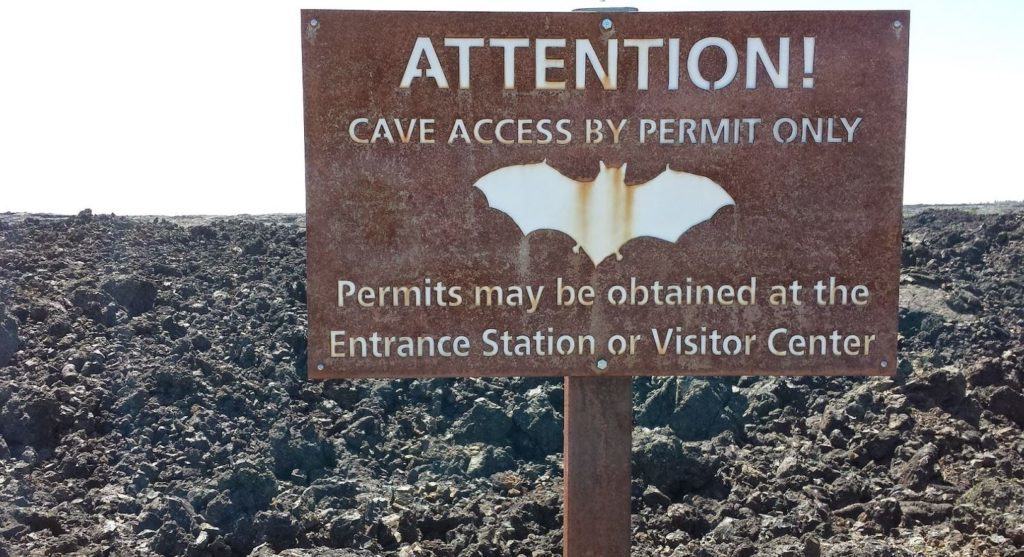 Prevent the needless death and protect precious bat lives. Get a permit at the Visitors Center.

Indian Tunnel is one of four caves open to the public along the Caves Trail in Craters of the Moon and is by far the most enjoyable to walk through. When we went, the day was hot at near 95° F as Hitch and I took the steps down into this cave the temperature seemed to cool down, but I could still feel wafts of warm air blow through the collapsed areas of the ceiling. Since the light bleeds through, we didn’t need our headlamps as much. When we reached the central area, it was easy to tell that this lava tube was large and we could walk comfortably. According to signs, the cave is 30-feet high, 50-feet wide and 800-feet long. Many bits of rock and rubble lay before our path, so we walked slowly and watched our footing. At the far end, we scrambled over a large pile of rocks and squeezed through a small opening to exit the cave. When we followed trail posts along the lava flow back toward the trail head, we were delightfully surprised by swooping Violet-Green swallows and scurrying Golden-Mantle squirrels. 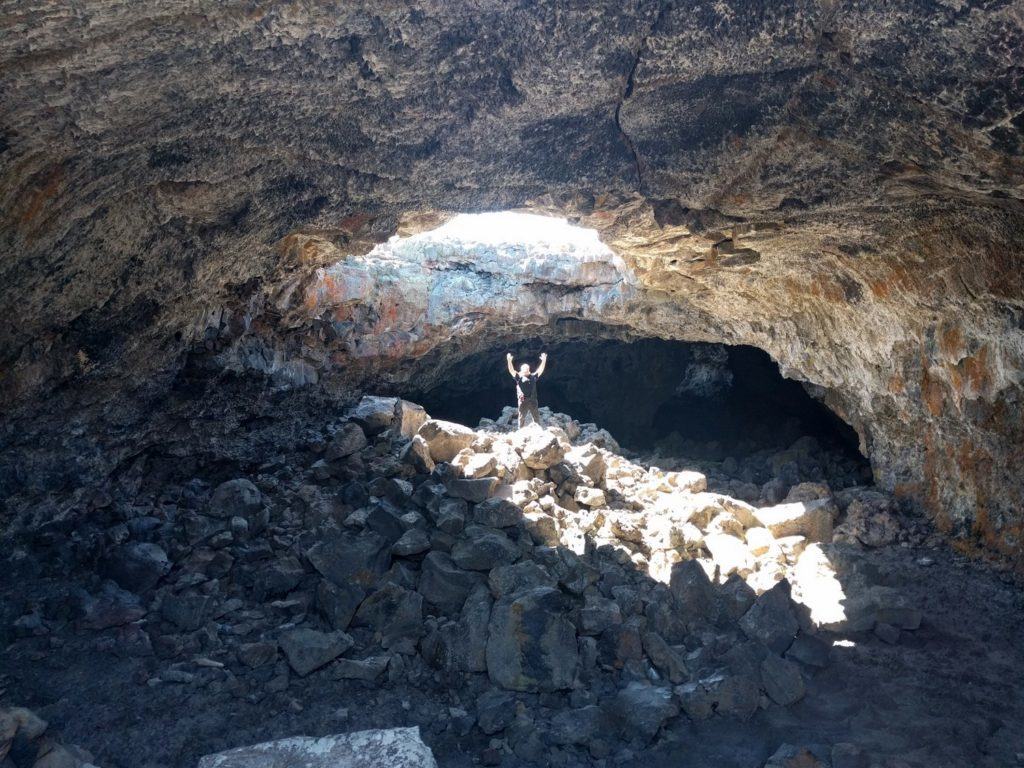 Back on the Cave Trail, we made our way to Beauty Cave. The entrance was large, but we had to be careful scrambling downward upon a slope of large rocks. Here we had to use our headlamps, and soon discovered that the pitch blackness prevents a simple hardware store headlamp from piercing the darkness far. Not too far in the cave, I noticed that the temperature dropped dramatically and we could see puffs of breath in the dim light. On the floor of the cave near the back, I could see that it was made of pahoehoe rock. We decided to turn off our lights and encase ourselves in an eerie ebony void. Without sight, I focused on the sounds of the cave: water dripping and plopping sounded like a light rainfall, wind at the entrance sounded like faint whispers, and simple breathing took on a creepy tone. We turned our lights back on and were greeted by a gust of hot air as we exited the cave. 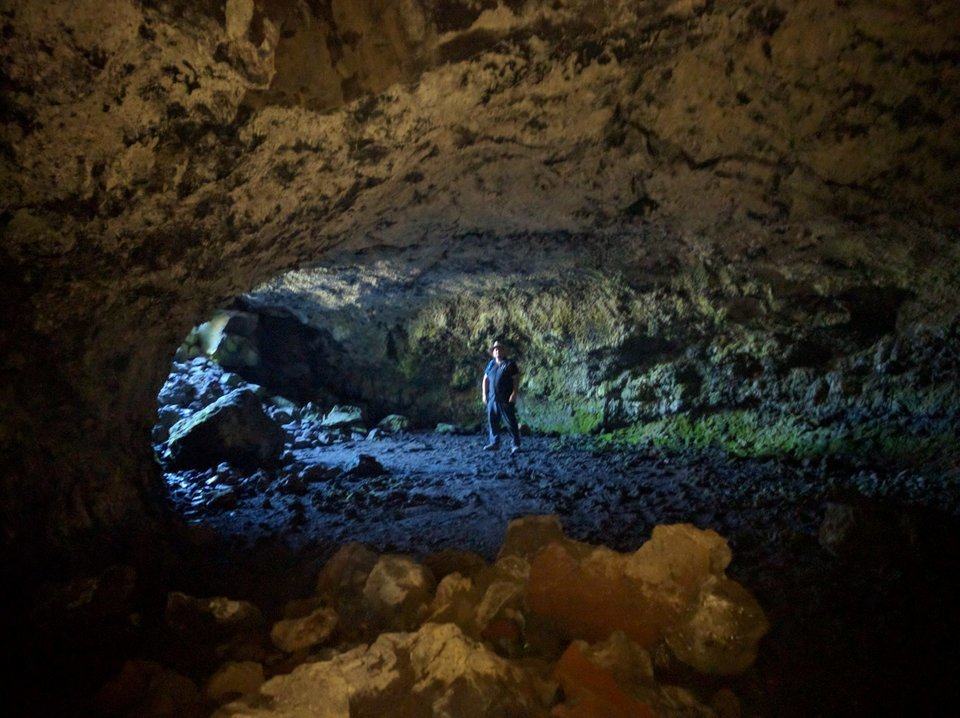 Beauty Cave – Listen to the “cave rain” and rest in the cool air.

We took the Cave Trail back to a cave we had passed earlier. Hitch took a look at the entrance and decided that we should pass on exploring this cave. According to the signs, this cave retains ice all year-round, and to enter it you must crawl over loose rock. The cave floor is often covered by a sheet of ice covered by several inches of water. After reading that, we determined that you have to be small as a boy scout to fit in the cave and to move on to our next location. 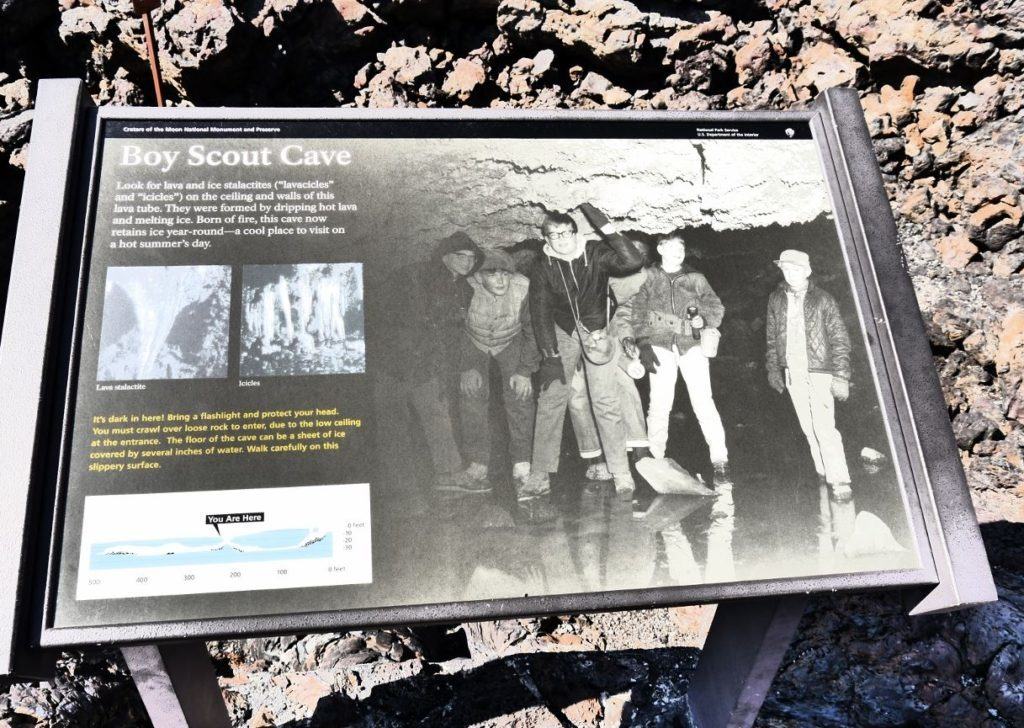 Boy Scout Cave – A cave for adventurous people under 5.5-feet tall with a girth of 38 inches or less.

Dewdrop Cave is small, and kind of dull compared to the other caves along Cave Trail. The emerald green algae and moss growing just beyond the entrance make this cave interesting. The cave was also cold compared to the outside sweltering heat and provided us with a nice place to rest. Unfortunately, the floor and entrance is littered with sharp rock, and I felt sorry for Hitch as he slipped and fell. On the way out, he bumped his head on the low ceiling, otherwise known as a “cave kiss” by the rangers. Its times like these that I’m glad I pack a first aid kit in my backpack. 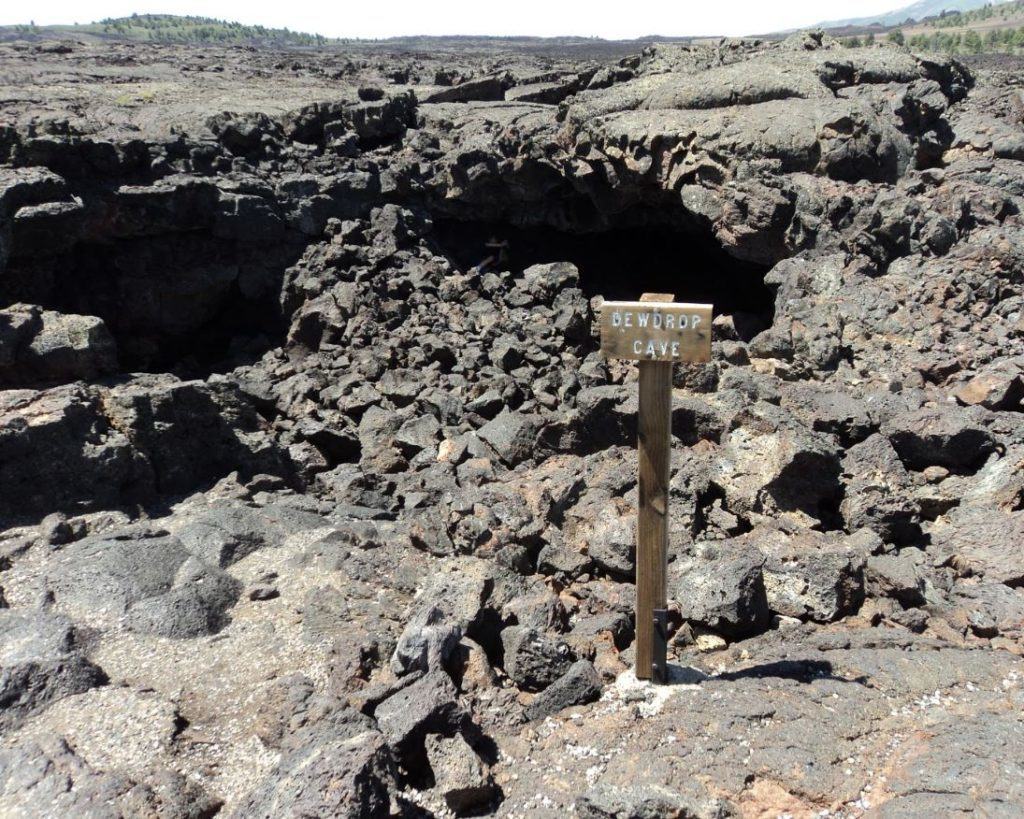 Buffalo Cave is located along Broken Top Loop and is part of vast tube system known as the Broken Top Flow. When we viewed this cave, we were led by Ranger Ted on a tour along the trail loop. The trail loop is an easy 2 miles and provides an opportunity to view nearly every type of volcanic feature in the park.  The cave itself has low ceilings and we crawled through the entrance to gain access. Inside the air was cool and damp, and along the far side, there were signs of a recent cave-in and warning signs saying, “keep out.” 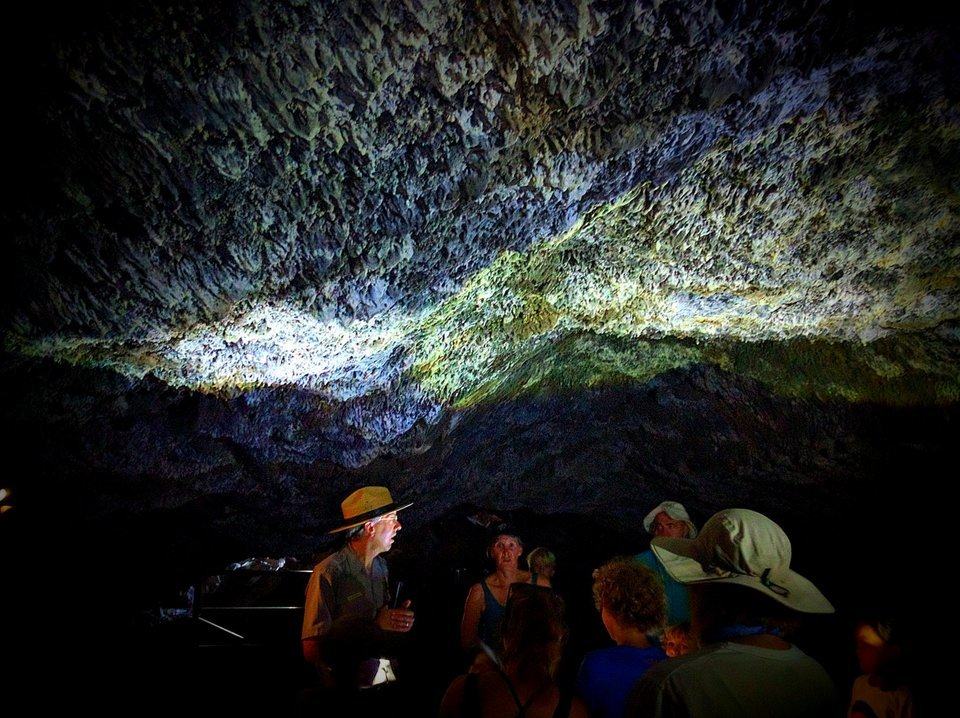 Caves make both Cave Trail and Broken Top Loop the most exciting day hikes, and that’s just a sample of the what is often hidden in Craters of the Moon National Monument.  Not many people realize that there’s more to the park than just what is available along the main drive loop near the visitor center. There’s also the “Preserve” portion of the park, maintained by the BLM, and much of which requires 4-wheel drive and sometimes a high clearance vehicle. All of it worth a few days visit, if not more. 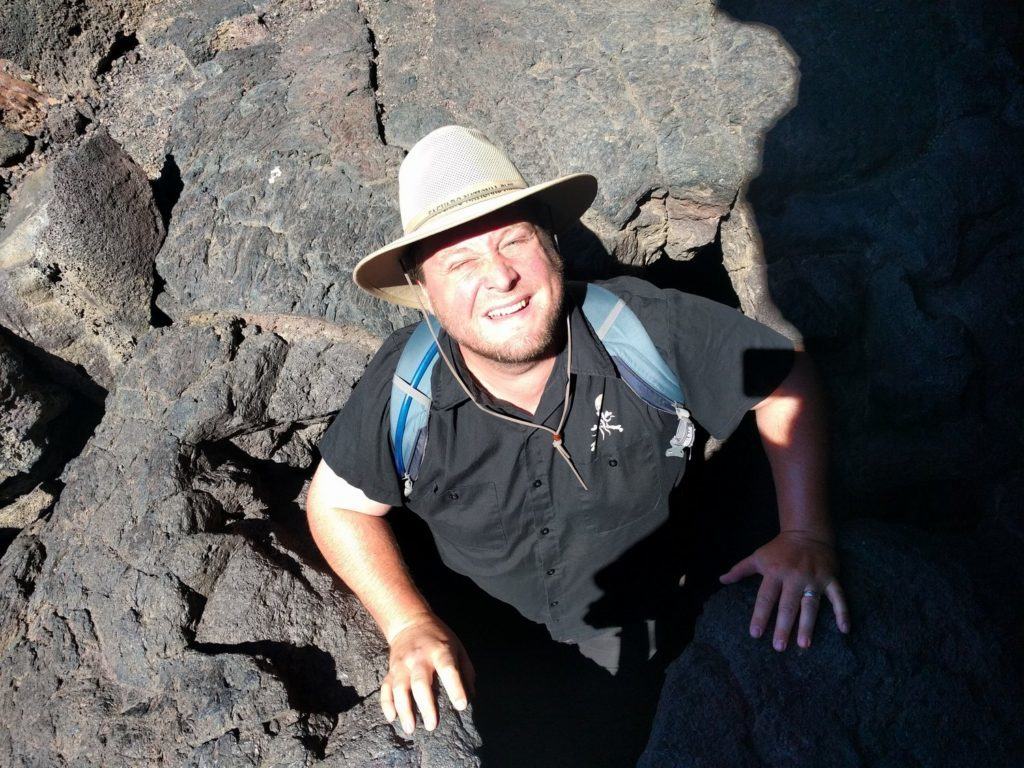 Hitch finally crawling out of the Cave 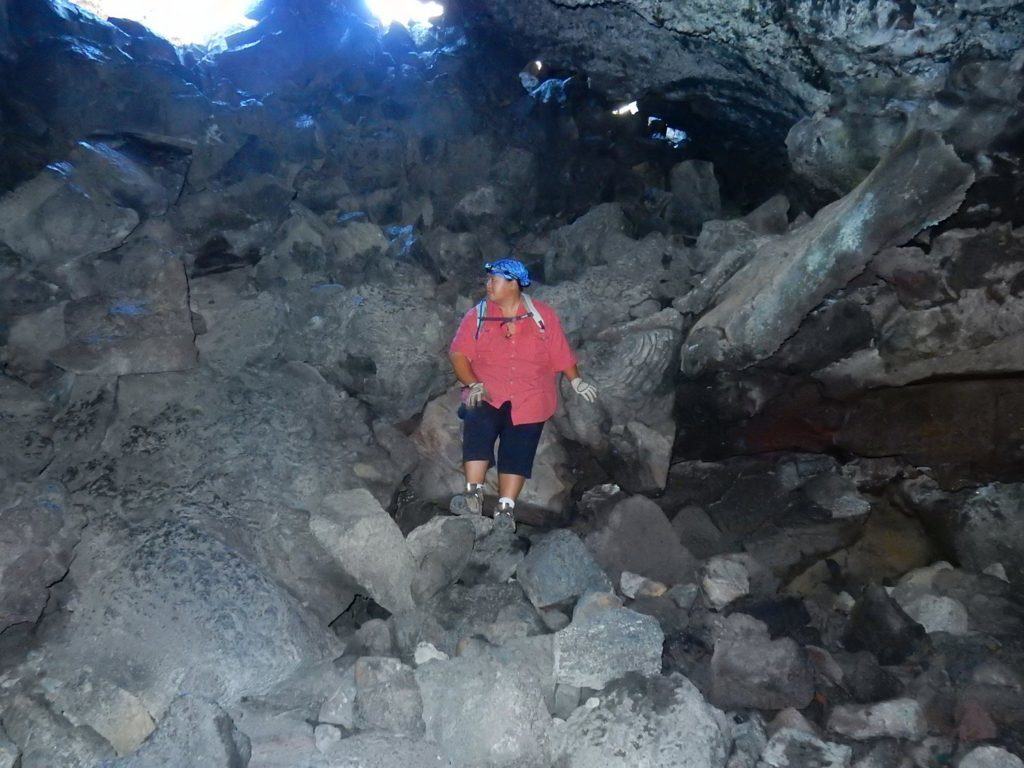 Dewdrop Cave – A small cave you have to crawl into 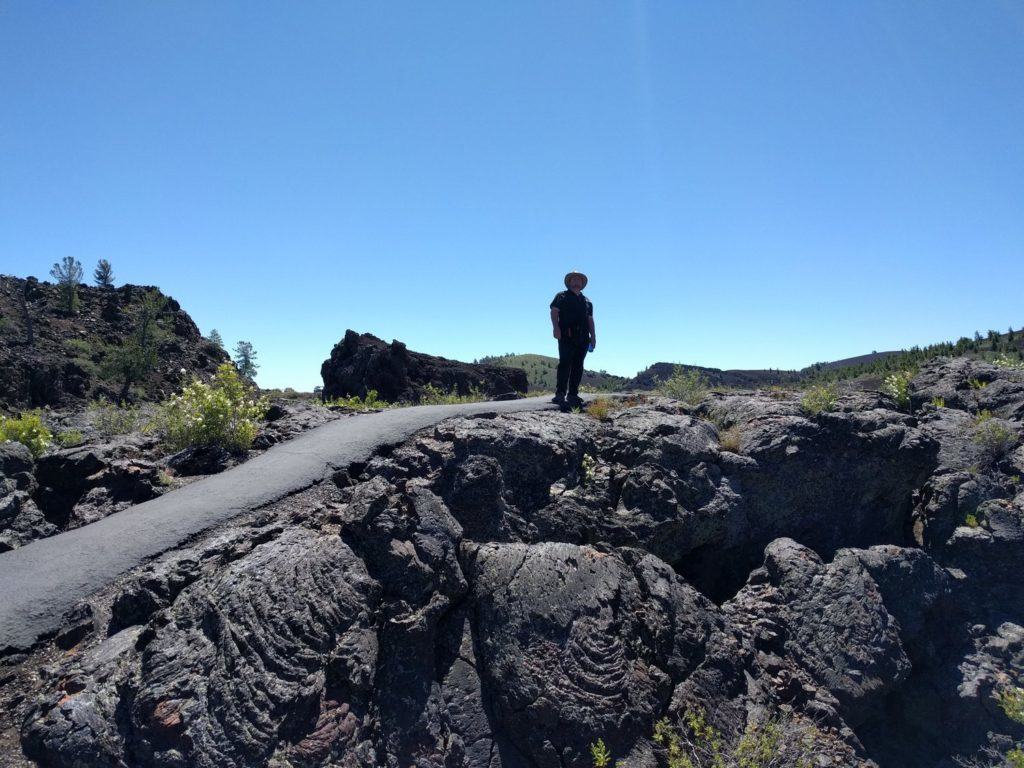 Hitch Along the Trail 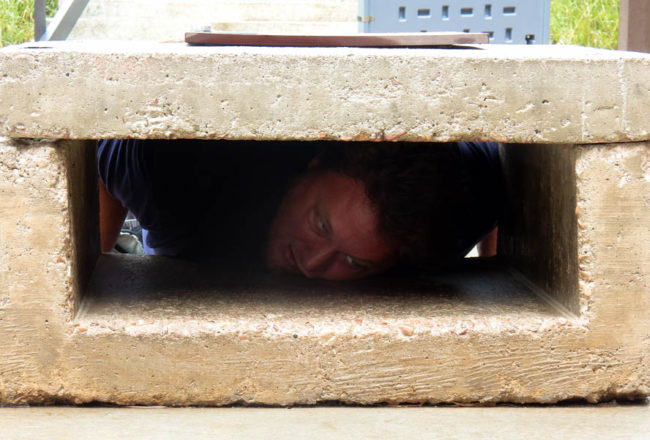