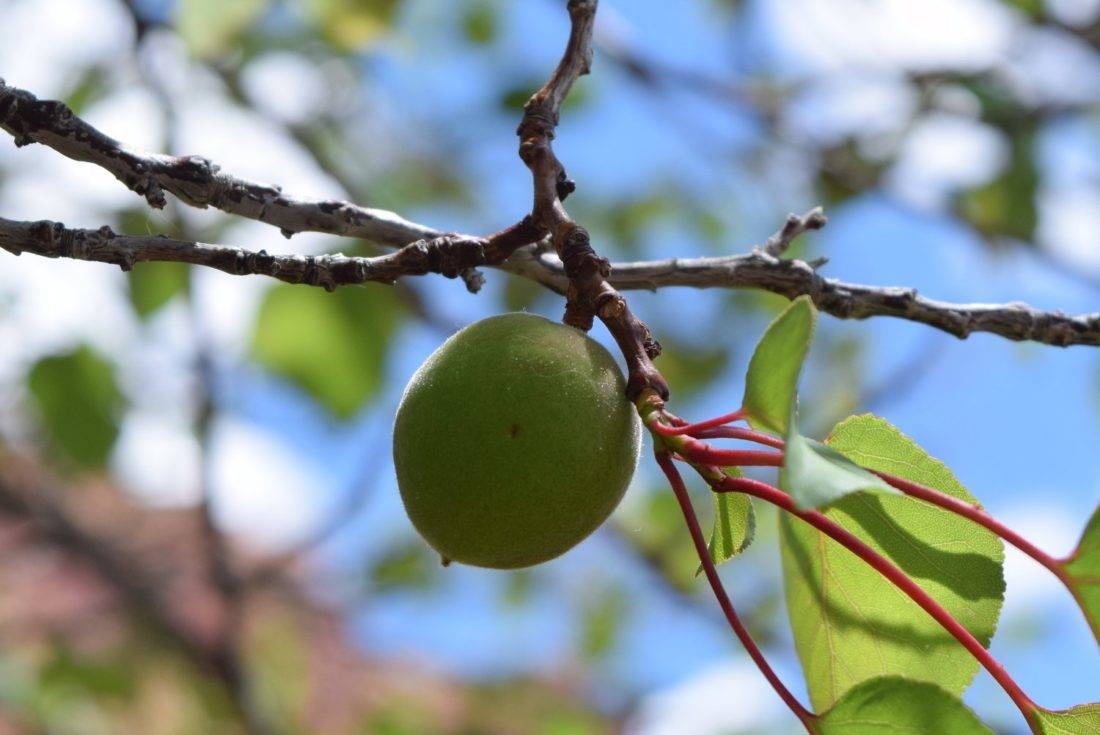 Capitol Reef National Park feels like a secret. Hidden away in the remote back routes of Utah, and as evident by the low tourist population, hardly known or seen by others. Without crowds, there is a wonderful sense of intimate discovery among the stunning and diverse geography. The park is larger than Zion and even has similar geographical delights, but its defining feature is the Waterpocket Fold. The Waterpocket Fold is the name given to the landform which rises up from the desert. It is an exposed monocline of rolling waves of earth and stone. The naked edge of the tectonic uplift is worn away into slick rock formations, imposing domes, and twisting canyons. 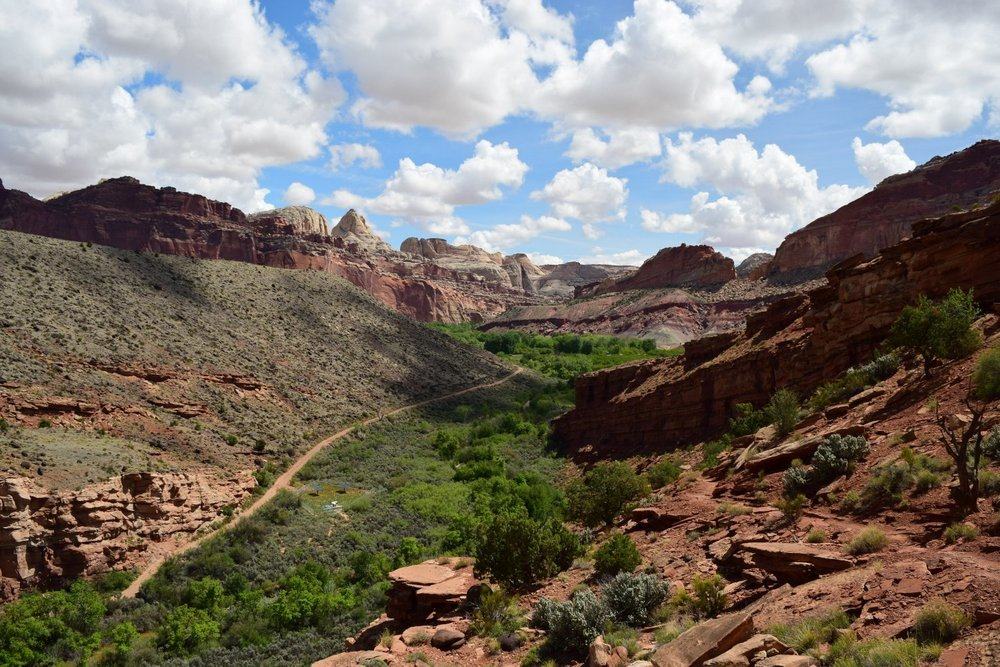 Fruita Valley from Up on the Fremont River Trail

The Fruita Historic District is located along Scenic Drive, the main road of the park. This is an old Mormon settlement consisting of 200 acres filled with fruit trees and refurbished houses. In early spring, the trees explode with blossoms, and in the fall, you can harvest fruits and eat as much as you want so long as you are within the orchards. If you want to take fruit out of the orchards, there’s a fee you have to pay. 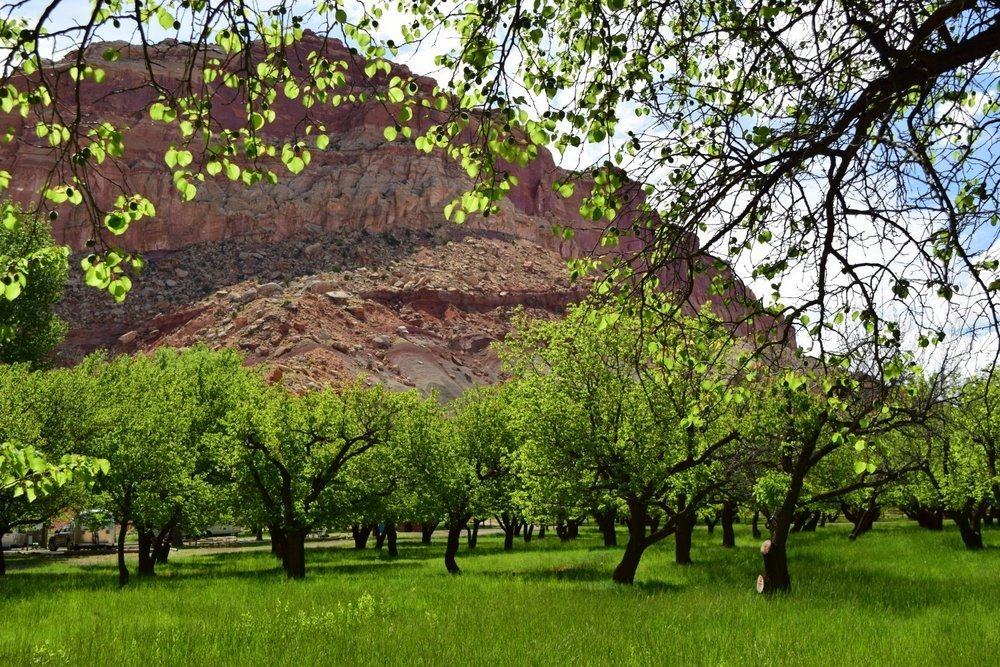 Orchards along the Fremont River Trail

I love gardening, and I’m rather dizzy with delight to be in Capitol Reef’s orchards. I spot dozens of nut trees, fruit trees, and other crop plants: apples, peaches, plums, cherries, pears, quinces, apricots, pecans, grapes, walnuts and almonds. Some fruit breeds are rare, and if I were here in the fall I’d get the opportunity to taste heirlooms such as Royal Anne cherries, Red Astrachan apples, Yellow Egg plums, and Flemish Beauty pears. 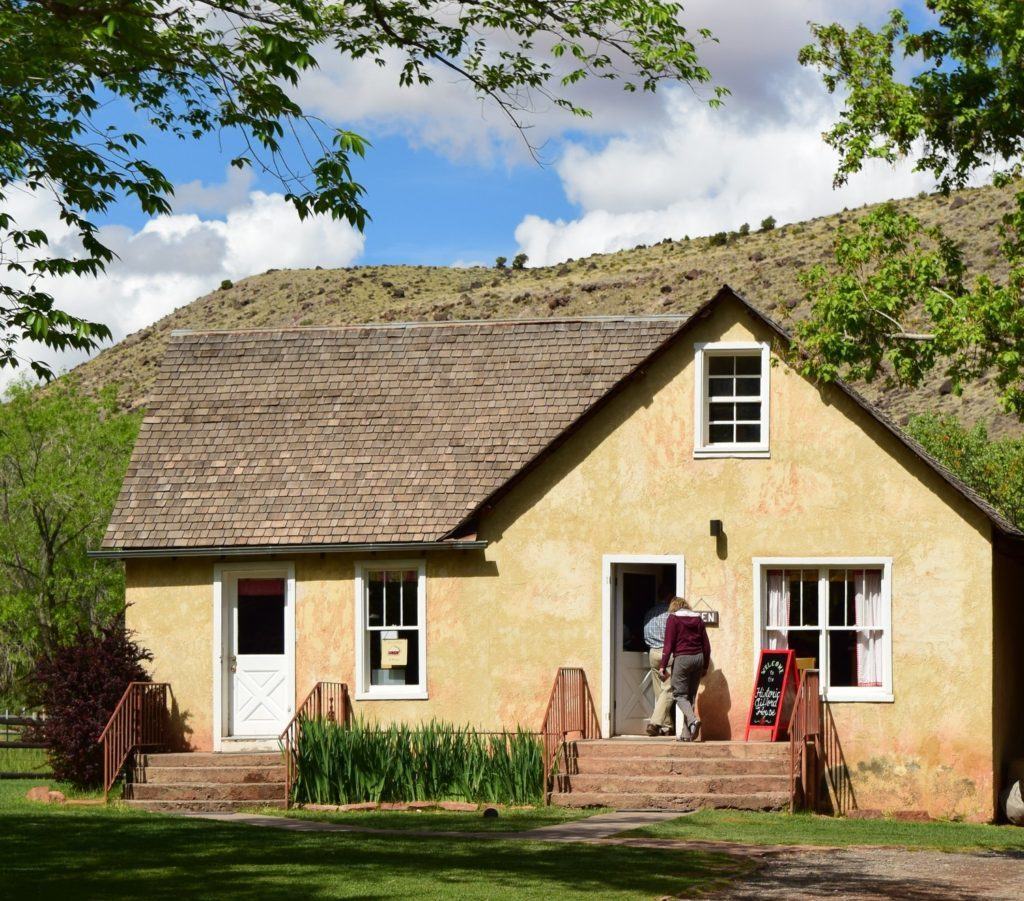 Any visit to Fruita must also include a stop at the Gifford House. In the heart of Fruita Valley’s desert oasis, this homestead established in 1908 by polygamist Calvin Pendleton. The second residents of the home were the Jorgen Jorgenson family who resided here from 1916 to 1928. Jorgenson sold the homestead to his son-in-law, Dewey Gifford, in 1928. From then on the Giffords owned the home for nearly 41 years. 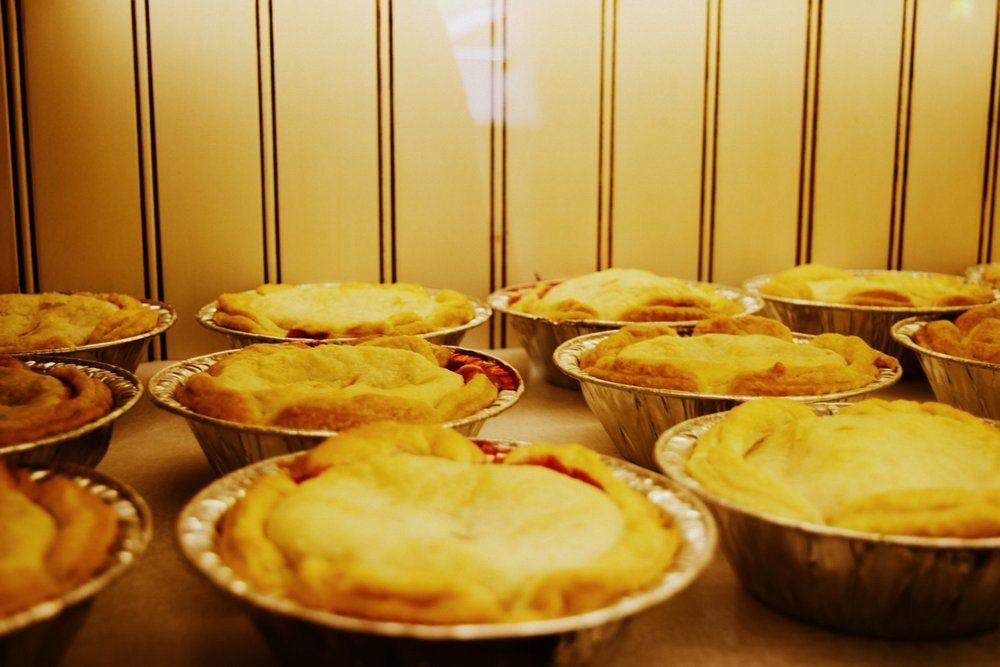 Today, the Gifford House is a cute little shop where you can buy handcrafted gifts, but the real prize is the fresh baked pies and cinnamon rolls. By the time Hitch and I showed up mid-morning, the cinnamon rolls were all sold out, but they had plenty of pies left. I snagged an apple pie for later in the day.

We started our hike just behind the Gifford House. The Fremont River bank was thick with brush and tall grasses. Near the campground, there’s an old cottonwood tree and provides cover for hikers wanting access to the river itself. That morning, the river waters were a silty green flowing calmly through lush plant life. 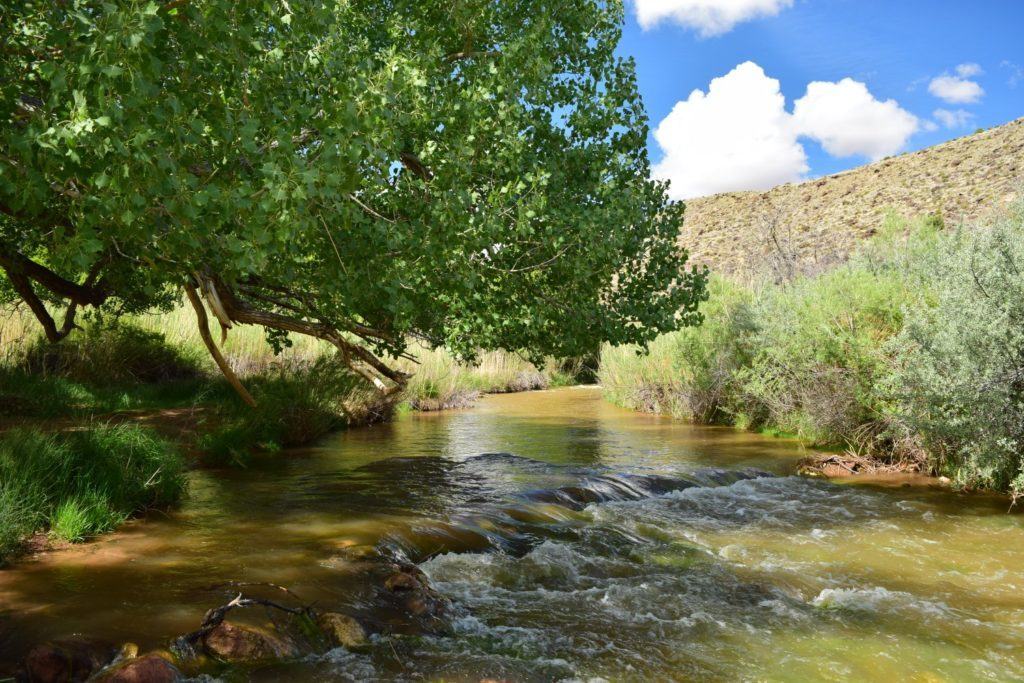 The path is an easy stroll through the orchards. I enjoy the sound of wind rustling through their branches and leaves. Secretly I wish it was harvest season, so I could grab an apple for my hike.

Just beyond the fruit trees and the bridge is where the trail ascends upward along a chocolate colored cliff face and providing some nice views of Fremont River. We take a rest for some pretty views of Fremont River Canyon, Wide Hallow, Cuts Canyon, and Miners Mountains in the distance. We just take in the views before hitting the switchbacks for the overlook point.

800 feet above the valley floor, the overlook provides a charming view of Fruita itself framed by mesa tops and cliff faces. I take a seat on a rock and savor the calmness.

On the way back Hitch and I notice that the river has changed color from a silty to a milk chocolate brown and is now raging fast, and swollen with additional water. Even though it’s a clear day here in the valley, upstream there maybe a storm forcing the river to change its temperament. 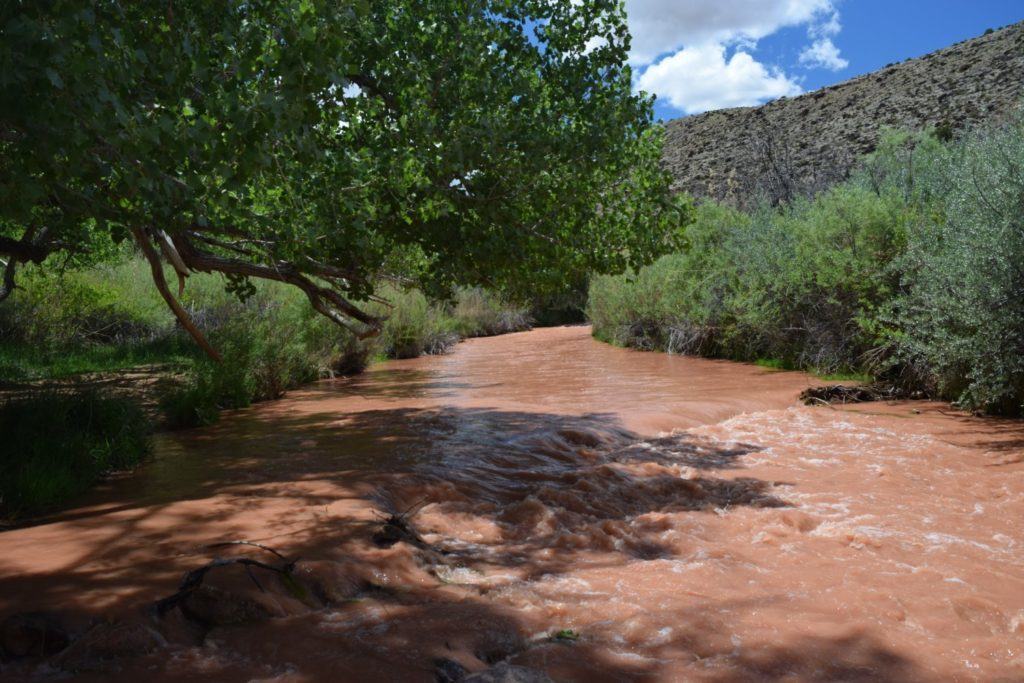 Just a few hours later the Fremont River is swollen and brown.

Back through the orchard, we notice mule deer feasting on rich tall grass. We sit on a nearby bench and remain still and quiet. The deer get used to us in a few minutes and move closer, one even taking a rest in the soft turf a little over 8 feet away.

Surprisingly serene and absent of other tourists, I am pleased by the charms of Fremont River Trail and would recommend it as a part of any trip to Capitol Reef National Park. 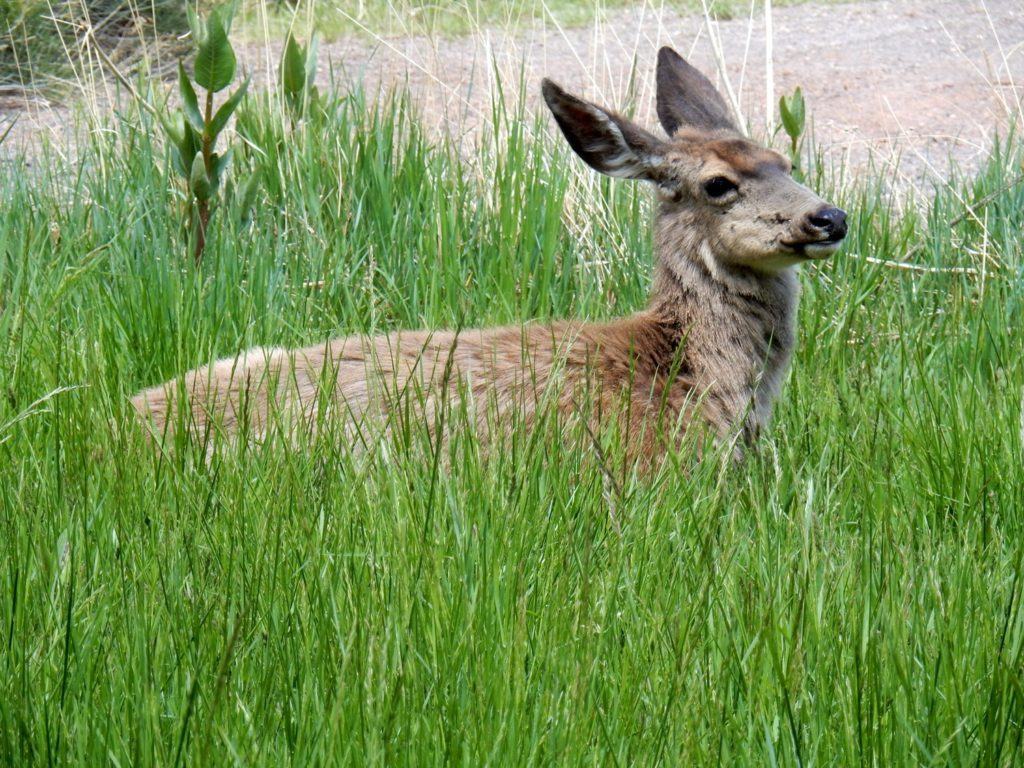 Deer resting in the grass within the orchard 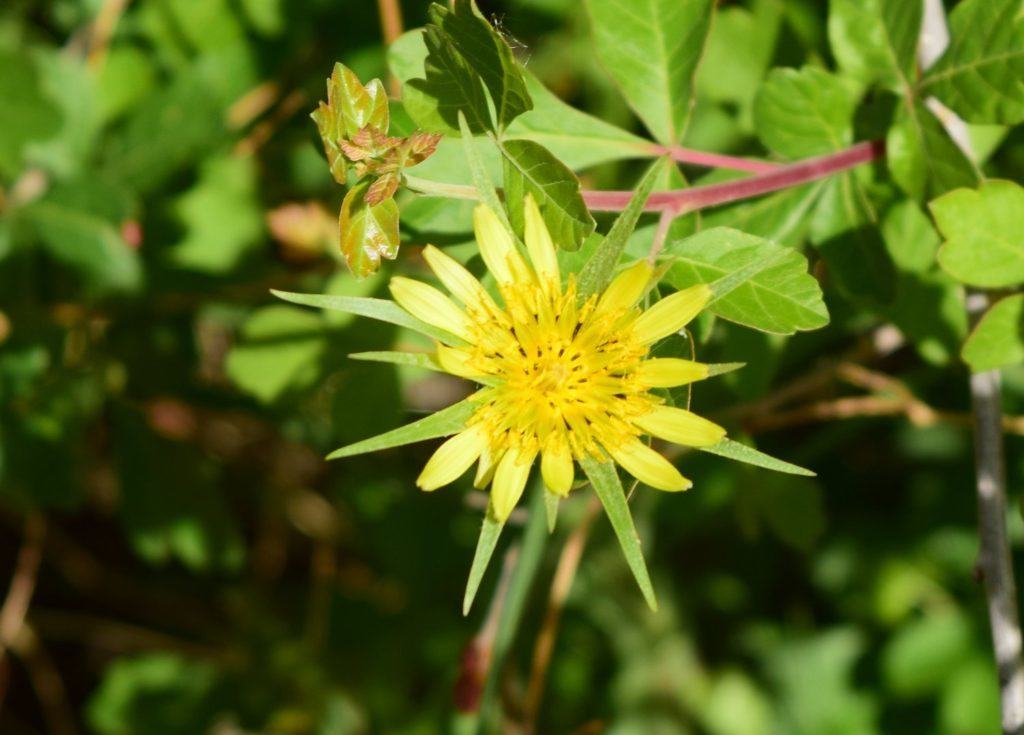 Goatsbeard Flower along the Trail 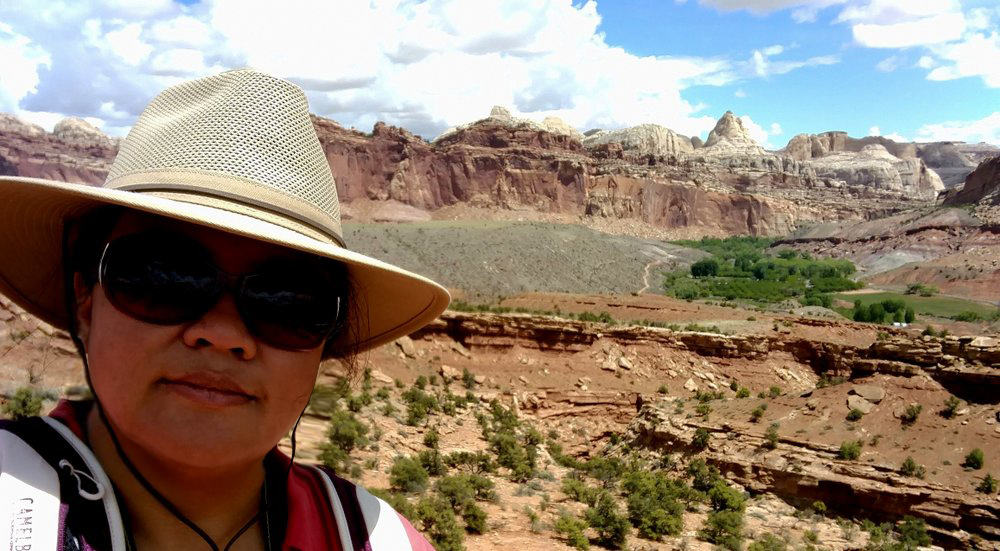 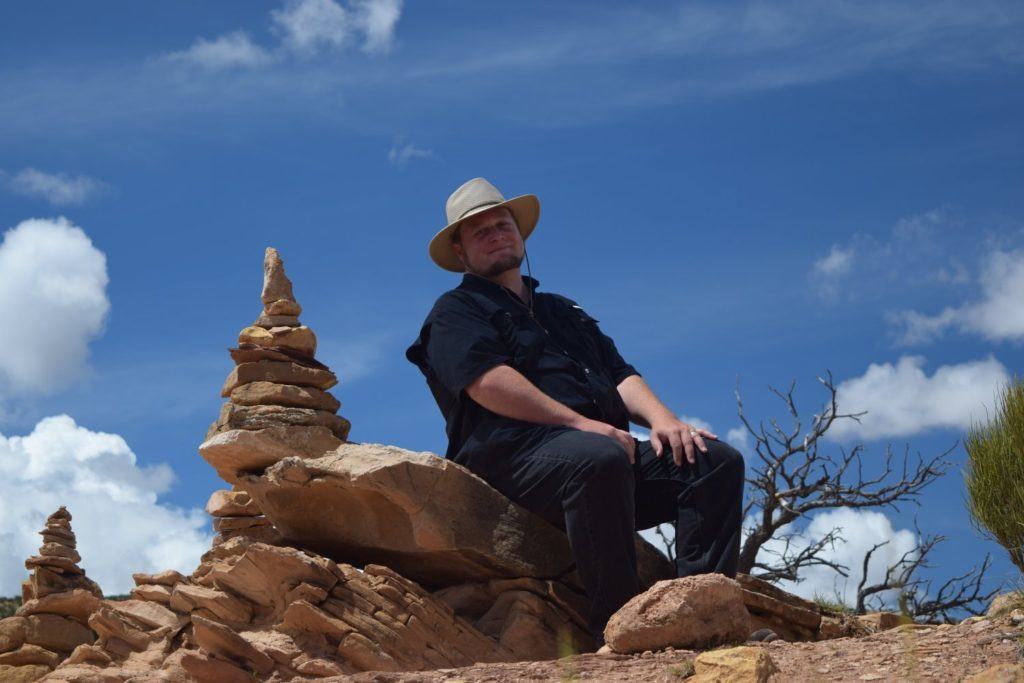 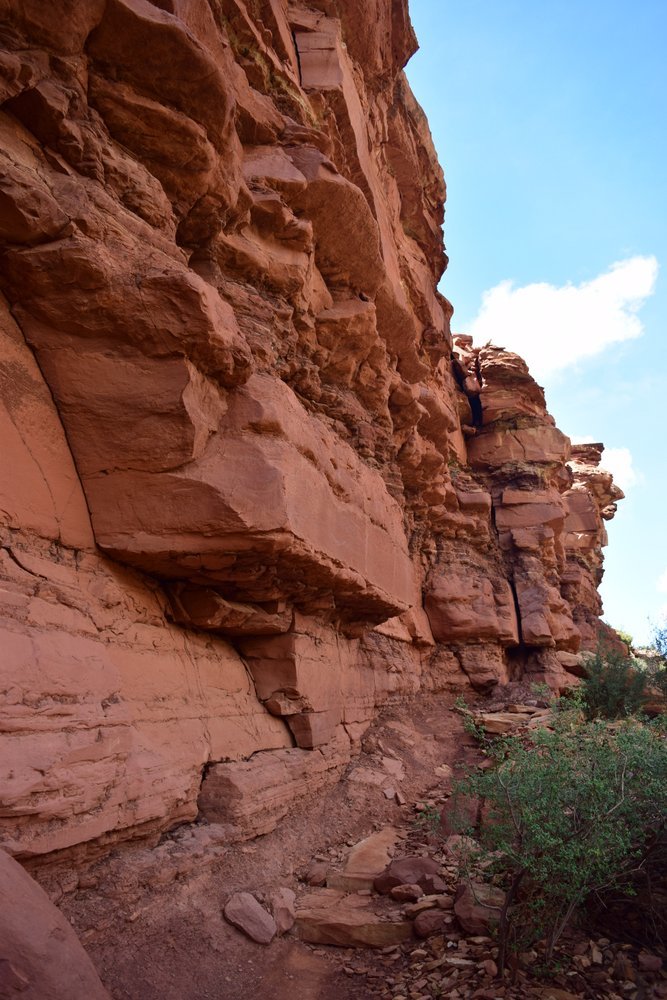 Chocolate Brown Cliffs above the trail 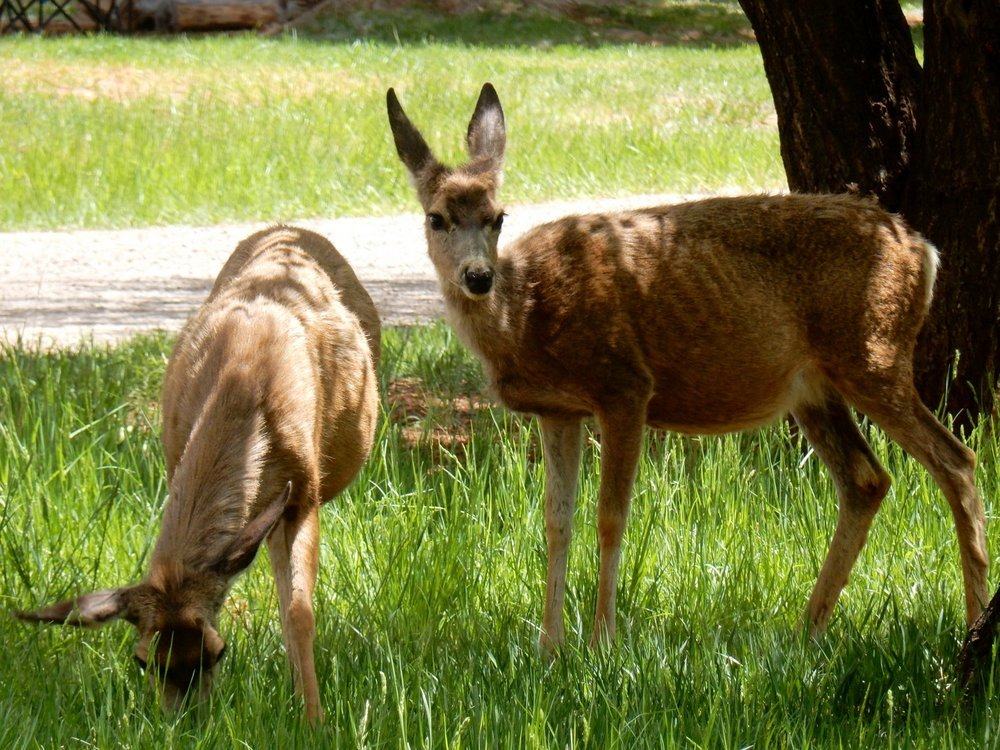 Mule deer on their lunch break 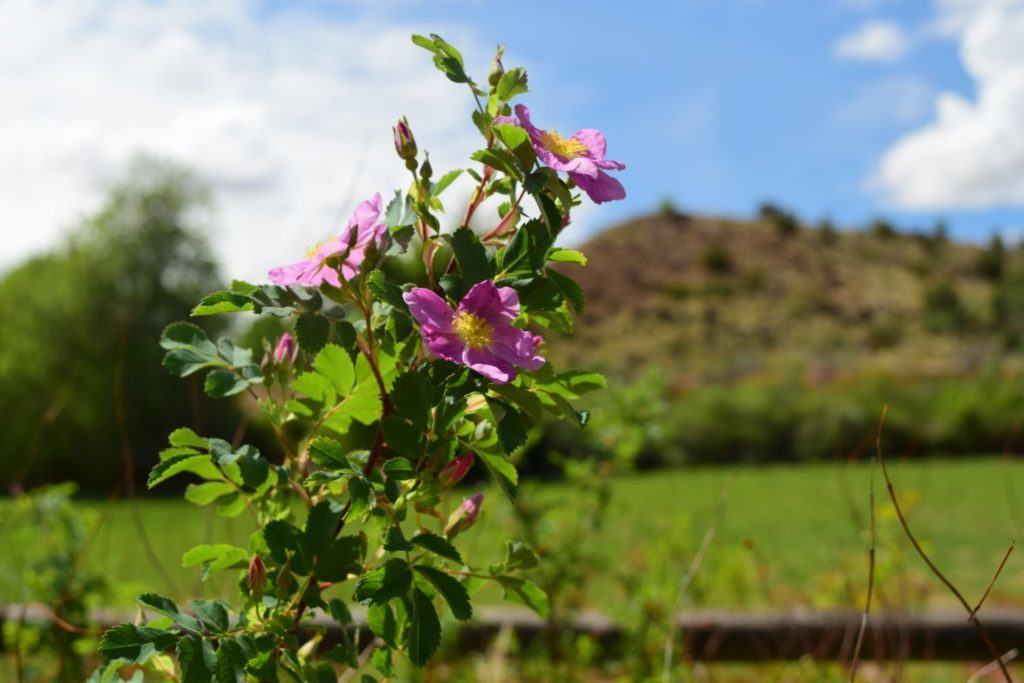 Wild Rose found near the trail 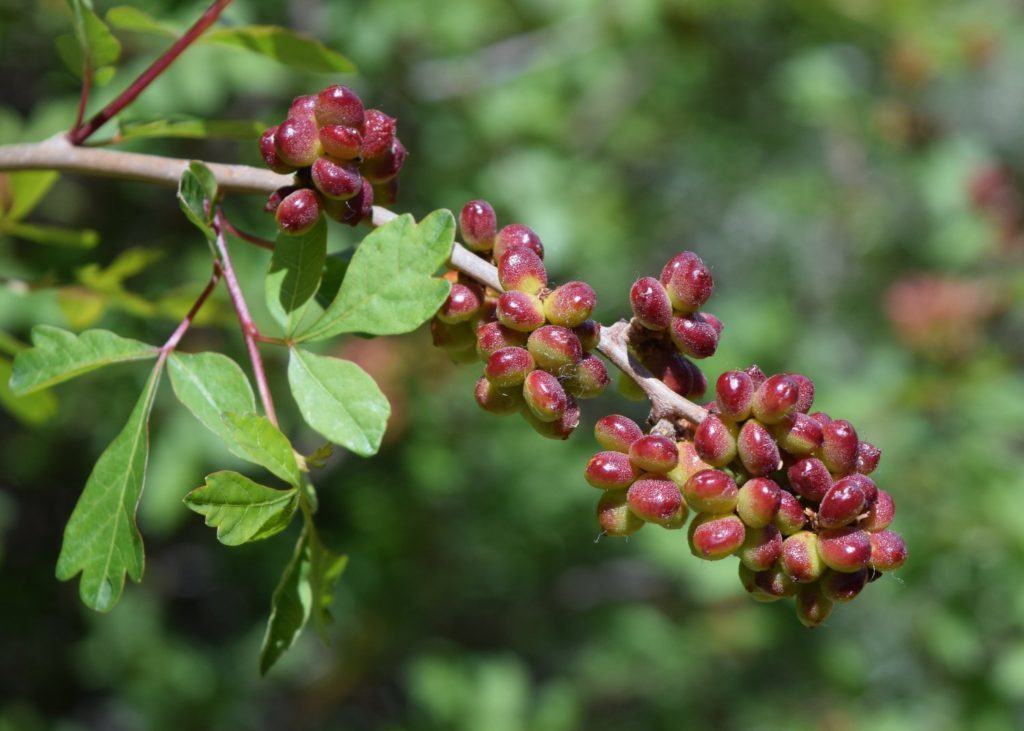