Why Buy an Airstream? 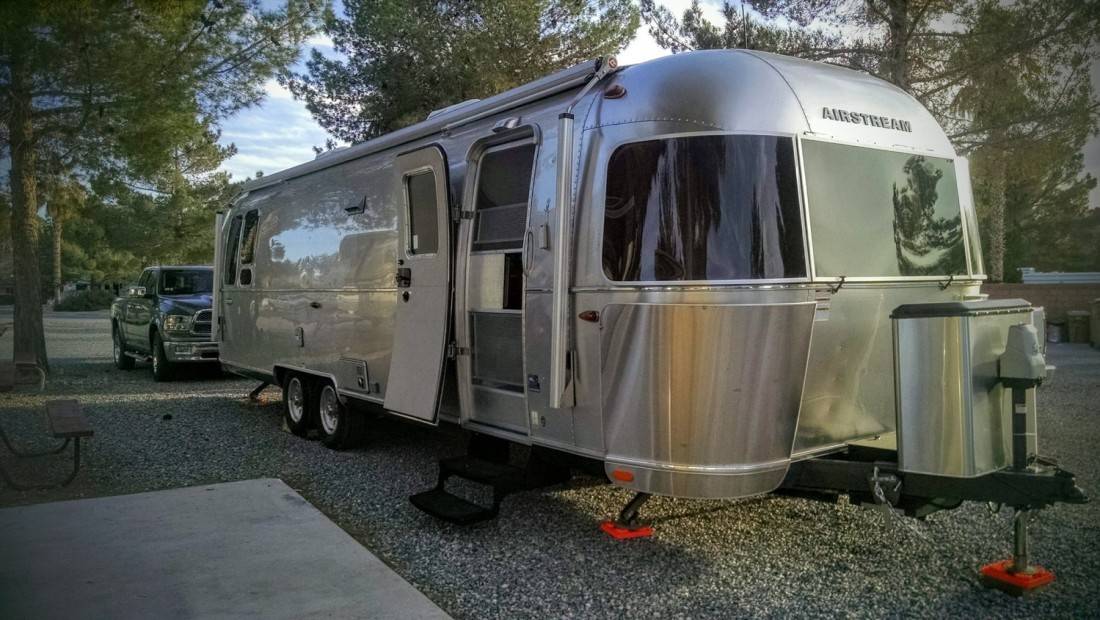 If you are shopping for a trailer or RV there are lots of options out there. Trail and I decided early one that we would get an Airstream. Trail tends to be the designated family shopper though I weigh in from time to time on larger decisions after doing product research. Decisions don’t come much bigger than selecting your home, especially one where you need everything you own to fit into less than 400 square feet.

Trail started the search with Airstream in mind as a good brand. She’d seen them growing up, heard of their quality, and always liked the future-retro style that is their exterior signature. That said, Trail isn’t an impulse buyer; she does her research. Firing up Google she set about reading what folks had to say about Airstreams as well as other leading brands. She spent time on the Airstream site where you can select a model, design, and interior options. By the time I turned my attention to the subject she was well convinced Airstream was the way to go. Let’s start with the bullet points.

The arguments against are as follows

That is the basic run down of why you would or wouldn’t buy one. Were I to summarize even further I’d say: “If you want the best quality and style, don’t mind limited space, and are willing to pay a premium price, Airstream is your best choice. If you have a smaller budget or want a really huge space, you will likely buy something else.” Now, lets hit up the details. 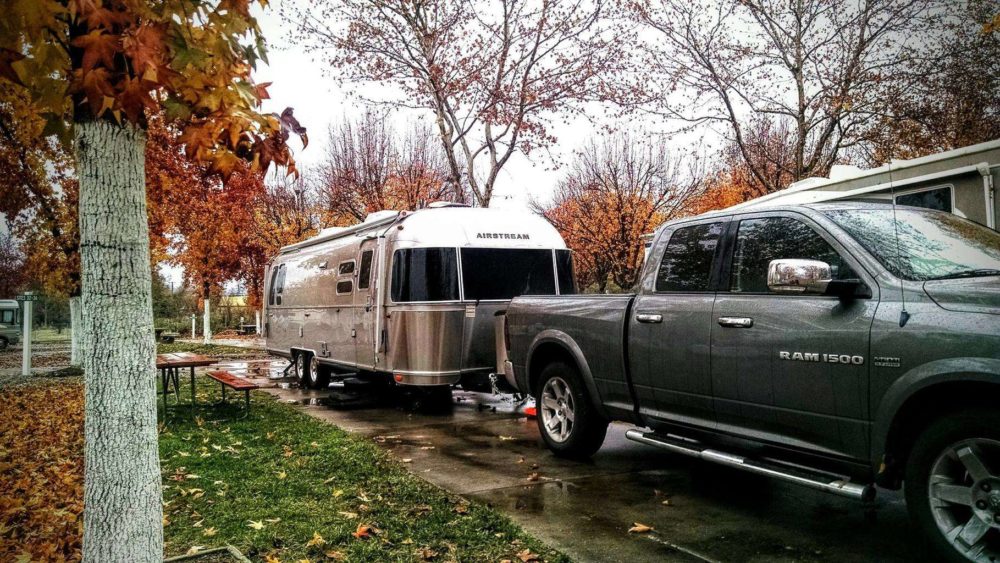 The Yamato (Our Airstream) parked at Mountain Gate RV Park

What is an Airstream?

Airstreams have been around since 1935, were the only company to make trailers after the great depression, nearly died off during WWII due to material shortages, but had a resurgence after the war. They declined in popularity into the 1970s and were nearly gone by the 80s. In the 80s they were purchased by a new company and resumed production. After switching to modern interior styling they have had a strong resurgence in recent years with record sales for the company starting in 2015. Airstream makes classic travel trailers and Class C camper van’s using Mercedes chassis. The travel trailers are really the classic Airstream design. Ours is a 30′ International Signature Serenity.

Airstreams are built using a two-layer aluminum hull made of riveted plates forming an inner and outer hull. True to their name they have an aerodynamic tube shape. This hull, much like an aeroplane from WWII is what makes them incredibly durable and highly weather resistant. Other trailers are generally built with either particle board frames sandwiched with thin aluminium panels, or “composite” fiberglass resin shells. The advantage is they are tough as nails, the disadvantages are that as a solid body they can’t have slide outs, huge hatches, or be fitted with large built in appliances. Everything inside and airstream had to come in through its door hatch. In other trailers, they build the inside first, then attach all the walls. 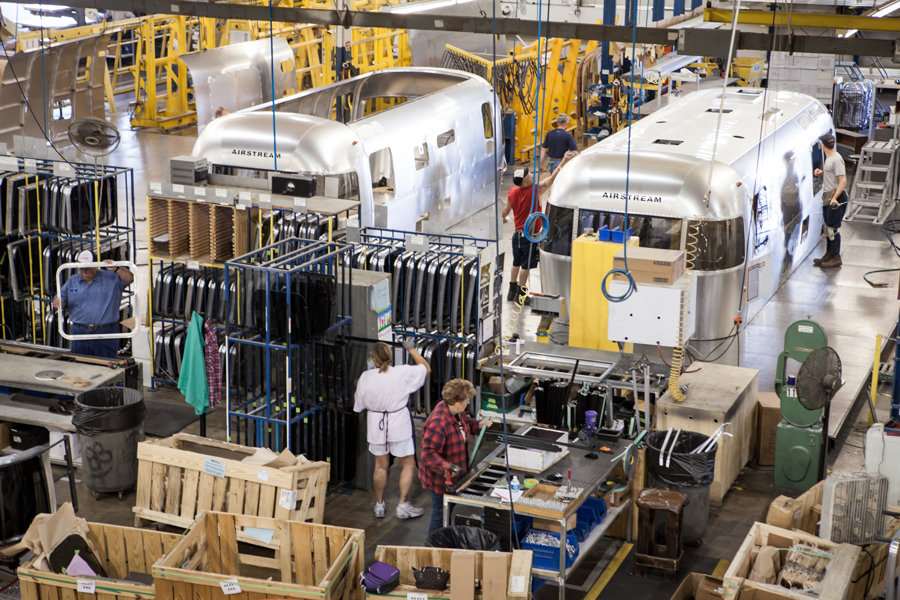 In addition to high quality, Airstreams are manufactured in the US.

For my decision making, quality was a big factor. As the only trailers with aluminium shell frames, they have real durability advantages over the long run. According to Airstream, 65% of every trailer ever sold is still in service. I’ve seen old airstreams sitting on farm lots or abandoned and I’ve seen the wood framed ones in a similar state; the difference is striking. Airstreams look a bit dirty and the tires might be blown out, but they look like a clean up will get them going. Box types tend to more or less disintegrate with the wood frames turning to mush and the panels rusting through.

Interior quality is also very high in airstreams. All the cushions are leather, ours has bamboo inlay walls. The faucets are name brand and the sort you would find in your house. All their modern trailers are green certified. Ours has multiple zone climate control with AC, Heaters, and a Heat pump as well as motorised hatches and fans. They have large tinted windows, most of which can be opened and have built in screens. There is a built in blue tooth stereo for the whole trailer you can play music, TV, or whatever you like through. All the usual appliances and all the faucets are name brand and full sized. It’s not all that big, but it’s swanky as all get out.

As  a result of all this Airstream’s have excellent resale value. The price of most trailers drops like a rock when they are used, but airstreams drop about 10% a year until they level out based on condition. Some refurbished vintage trailers can fetch nearly as much as brand new models. 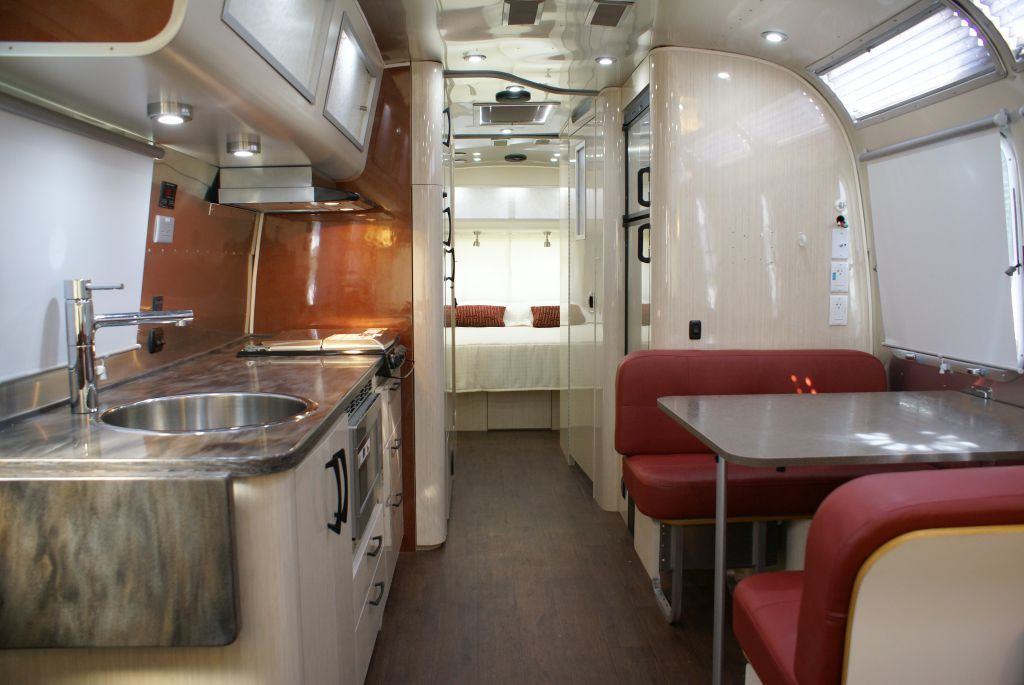 This isn’t ours but it’s pretty close, we have shell colored cushions… and more clutter.

Airstreams have a unique style and brand. I would liken them to Apple. They are unique in their marketplace, stubborn in sticking to their design principles, and loved by those who are loyal to the brand, however popular it is at any given moment. In an average RV park, you will only see a handful of them, but they stick out and you will almost always get questions and comments from other RVers about the trailer. Go to a national park and the are a bit more common though still a minority of the RVs. Most RVs style their interiors to have a country hunting cottage motif with lots of brown leather and stained wood. There are Airstream models like that, but most are about shiny metal, cool colors, simple and elegant with a modern minimalist style.

Many airstream owners are members of the Wally Byam Caravan Club named after the company founder. The gather for large rallies and conventions and there is a kind of travelers, secret society mystique about the whole thing. There are Airstream specific camping sights, blogs, bulletin boards. Drive by a fellow Airstreamer and you are supposed to give a little honk or flash their lights in a gesture of comradery. There may even be secret handshakes or milkshakes or some such. In the smokey back rooms of private bulletin boards, they refer to other brands of RVs as SOB (Some Other Brand). Want to feel kind of exclusive and superior?  Airstream has you covered!

This is a 1950s era Airstream with a very cool customized interior.

Probably the main reason you don’t see a lot of Airstreams running around is the price. Our 30′ model isn’t quite the most expensive available but it’s on the upper end and we paid $89,000, then added taxes, fees, licencing, warantees, etc…  We came out just a bit short of  $100K. For a trailer, that is a lot. Looking at enormous 5th wheels with king beds, 45″ TVs, stone fireplaces, and storage areas large enough for a family of 3 to live in, they were in the $65K range. Mind you our model with its options lists for around $110, but a 20% discount is generally about what you are trying in to buy a new RV. Even the smallest and least luxurious 16′ airstream lists for $45K.

You can buy them used but as I mentioned, the discount for age is not as significant as with other brands and are a bit harder to find. A quick search turned up some as low as $2,000 and still looking quite nice though $8K seemed the typical low-end price for a stock 1970s era airstream. Extensively reverbished vintage airstreams tend to cluster around $30,000 on the used market.

Some folks also customize the outside of their Airstream.

Our 30′ trailer is not what I would call small, but parked next to the typical 5th wheel or class A RV it looks pretty shrimpy. They are not as wide nor as tall and they don’t have the now ubiquitious slide outs; motorized panels on the side of the trailer that expand when parked about doubling the interior width in key areas. For the purposes of living space, this has disadvantages. Trail and I have to do a little dance to move past one another inside and while certaionly comfortable to live in, I woudn’t call it exactly roomy. Our Airstream bed is as big as they make them and it’s only just barely big enough for the both of us to stretch in. Mind you I’m something of a giant at 6’3″ and 320lb (on a good day). I can stand and sit comfortably in my trailer. Testing that out in person was one of the first tests of whether Airstream would work for us and it passed readily.

The up side of its relative size is ease of towing. They are a bit lighter than similarly sized wood frame trailers so you need less power to haul it. Its aerodynamic shape also means less drag and thus, less gas and less power needed. In addition, it suffers a lot less from windy conditions both when parked and on the road making it a bit safer and less prone to damage. Its low profile means fewer worries taking it on ferries or under bridges or into tunnels. No slides mean less moving parts that can break and a sturdier overall frame.

So this one is perhaps a bit too small for me.

Bottom Line on Why Buy an Airstream

I doubt anyone buying an airstream has regretted the decision. They are top to bottom a great quality trailer that can last a lifetime and will give you a wonderful place to live nearly anywhere you want to go. Ther are CEOs and movie stars that live and work in them regularly. That said, you will pay for the high quality and you give up some of the incredible room and luxury you can find in Class As and 5th wheels. I certainly love mine and am very happy to call it home. 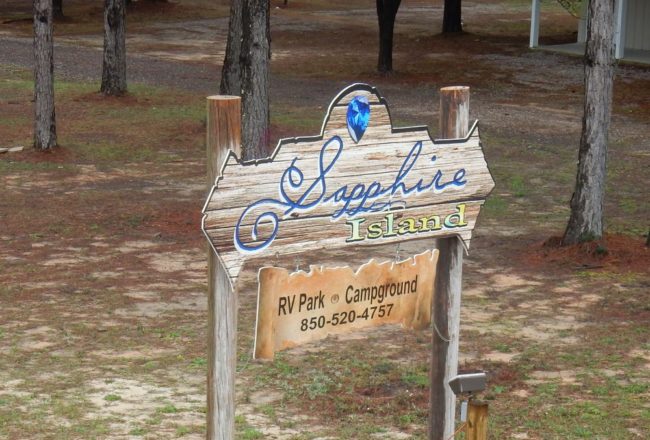 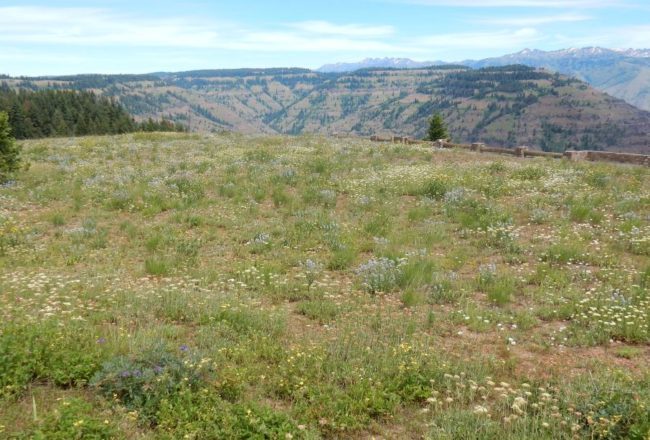 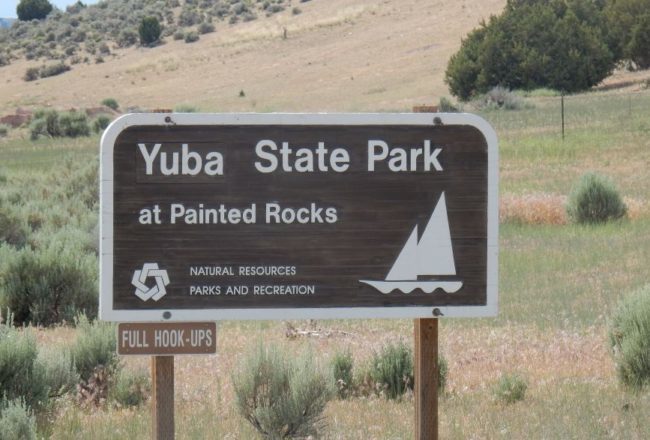