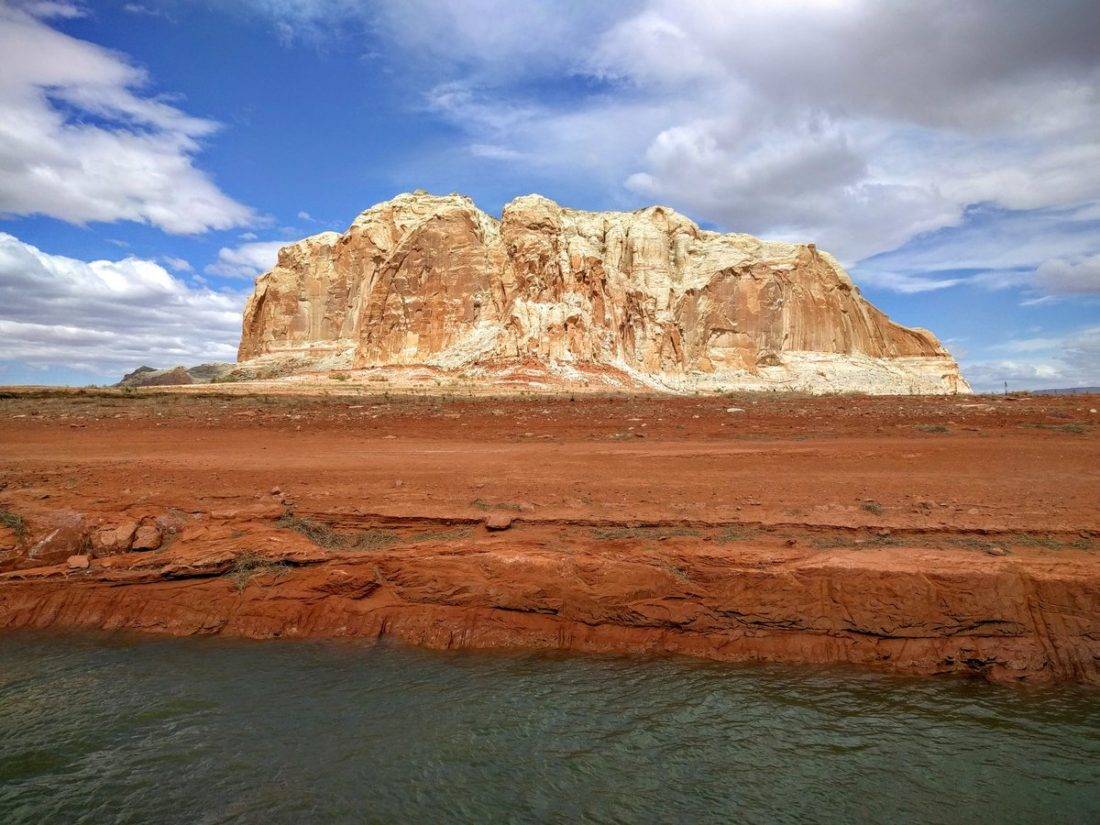 As we drove up to Wahweap Bay, we both let out a long sigh-like “wow”.  We beheld shimmering blue-green water and cresting rocks of white, red, pinks and oranges. Much like the Grand Canyon, Glen Canyon was carved by Colorado River some 5 million years ago but much of it is filled by the waters of Lake Powell, a reservoir created by Glen Canyon Dam. Unfortunately, due to high water use and drought, Lake Powell is at its lowest point.  From shore, you can see a white bathtub ring which is caused by the calcium carbonate and other hard minerals in the water that attach themselves to the red sandstone. 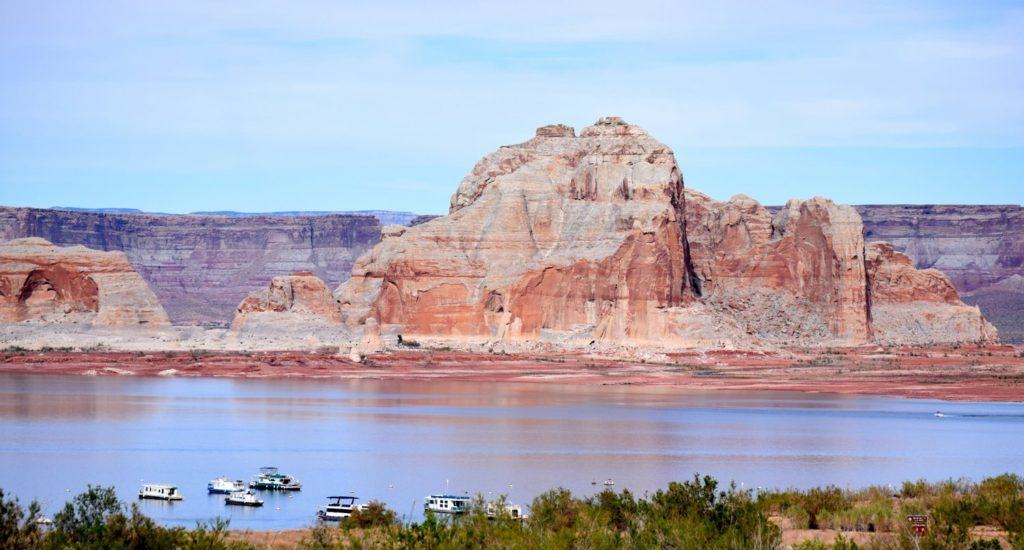 A day before our tour we ominously watched police boats and a rescue helicopter searched the bay for any survivors of a capsized boat.  Sadly, I later learned that they had found the body of a man who drowned in that boating accident.

Not to be daunted by wind, rain, nor portent, we boarded our tour boat. Aboard we donned headphones with receivers so we could hear audio descriptions of viewpoints. We decided to brave the elements and took a seat on the open top-deck, while many others took shelter below.  I was eager to see side canyons held within Lake Powell, and though there are 96 of them, the tour only offered sights of two: Antelope Canyon and Navajo Canyon. From the Wahweap Bay, our captain took us on a circuitous route southward toward Glen Canyon Dam and around Antelope Island.  Glen Canyon Dam is second highest concrete-arch dam in the United States, the first highest being awarded to Hoover Dam. 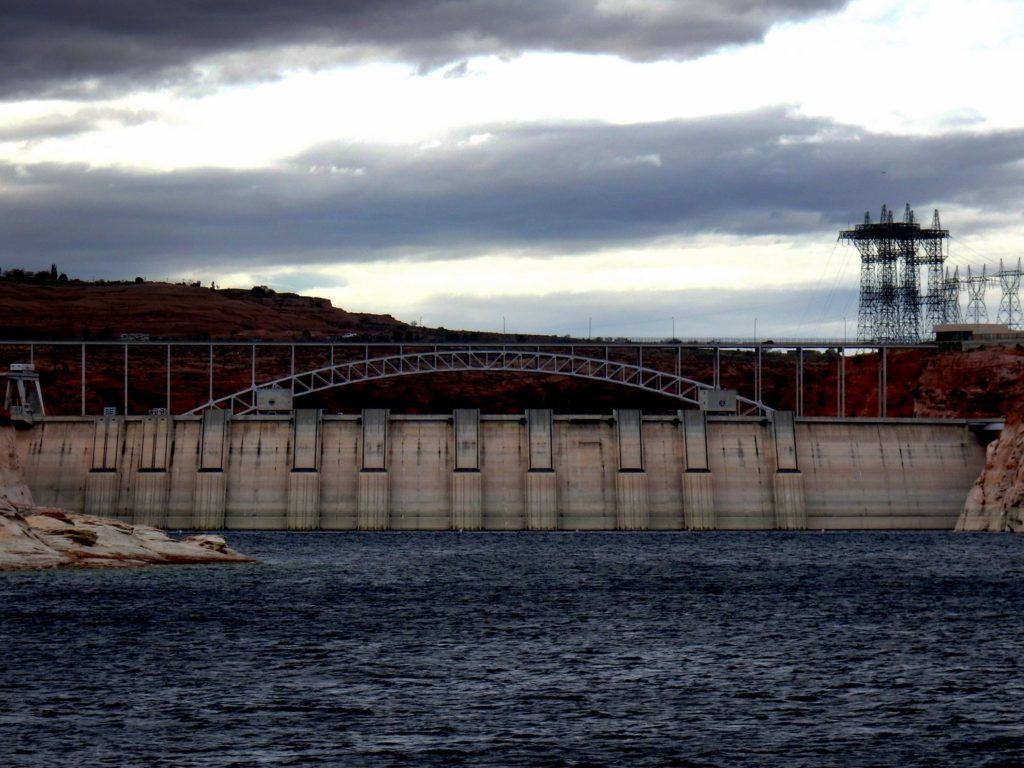 Glen Canyon Dam From Behind

Antelope Canyon, Lake Powell side, is a total length of 10 miles. White walls rise up from the water and give way to red capped sandstone. There are holes or pockets seemingly scooped out of the stone. Our captain tells us that these pockets use to hold clay deposits which were worn and washed away leaving the holes. It’s surprising how fast the walls narrows and the boat can only navigate 4 miles of the canyon before turning around.  You’re probably wondering, is Upper Antelope Canyon the same as Lake Powell Canyon?  They use to be, but now they are 4 miles apart, the upper canyon located south only joined by a sandy wash. 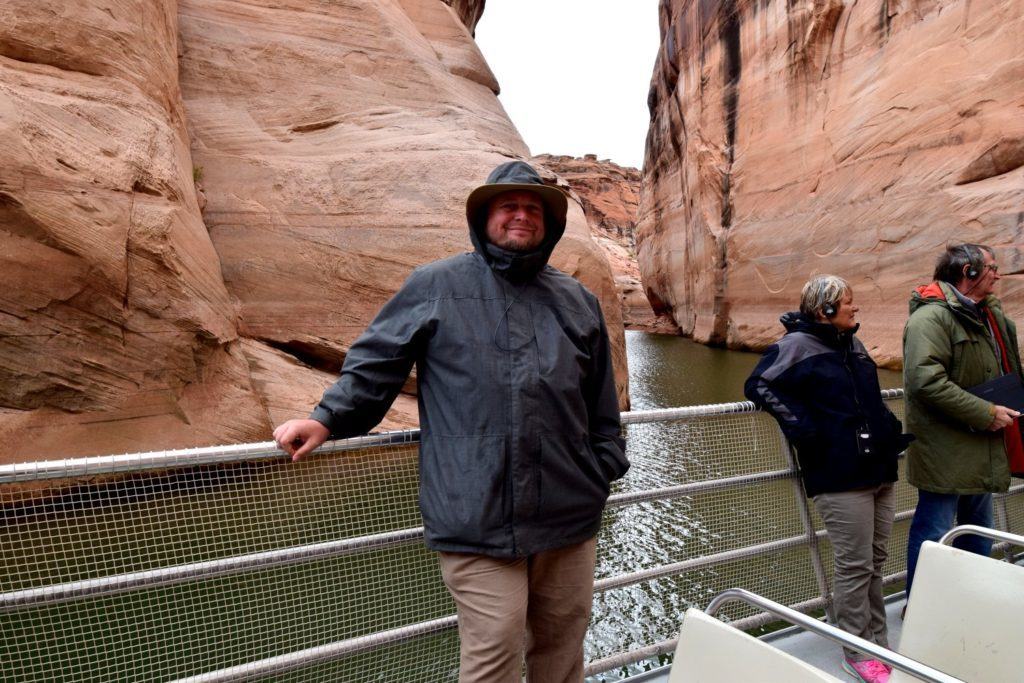 Hitch armored up in Antelope Canyon

Our boat moves along the south side of Antelope Island and onto Navajo Canyon. where the walls are 600 feet above the water. One of the longest of Lake Powell’s 96 major side canyons, it is also one of the only side canyons to have been a tributary of the Colorado River. There are twists turns that last for 15 miles and walls covered with Navajo Tapestries — markings formed by iron oxide and manganese residue left by water eroding from above and draping down the sides. Along this route is the 50/50 Wall, where the rock is above you, it is equally deep below you in the water. 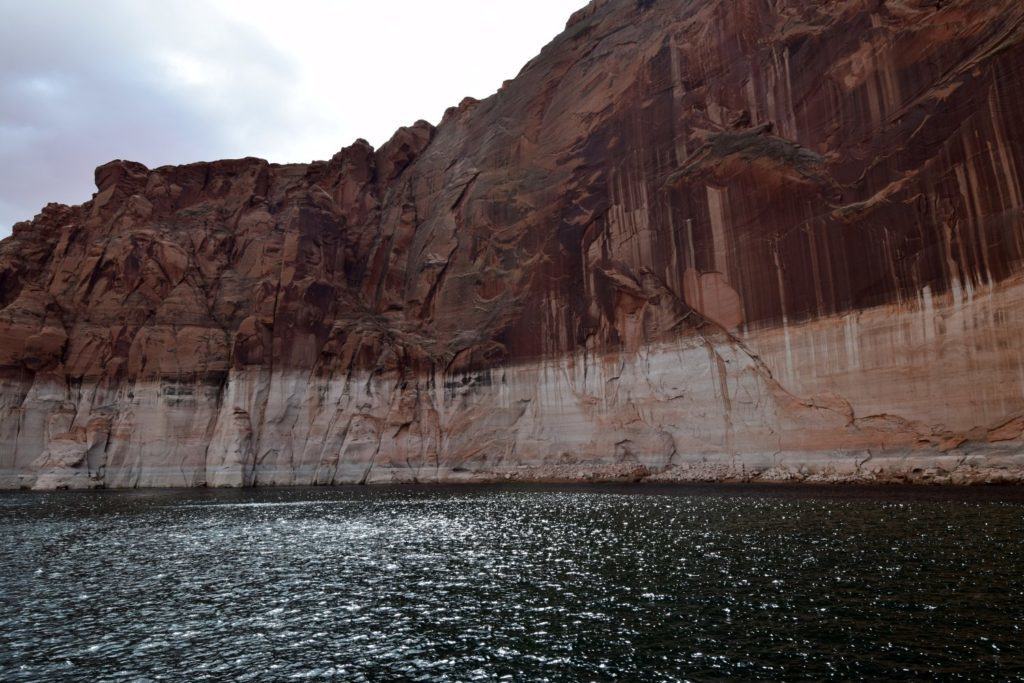 Spinning around the captain takes us out of Navajo Canyon to the Utah Side of Antelope Island. and through Castle Rock Cut. This pass was carved by the National Parks Service and serves as a shortcut to Wahweap Bay.  The boat ride along here provides a great view of Castle Rock Butte.

Castle Rock Pass as the Sun Finally Comes Out!

As we pick up speed back toward dock, I realized we’ve only seen a tiny bit of Glen Canyon and Lake Powell.  There are 96 major canyons, much of them only accessible by boat. I know one of them is home to Rainbow Bridge, a national monument, and the world’s highest natural bridge.  I begin to wonder how many arches, caves, slot canyons, and other rock formations are hidden within this national recreational area.  I sigh and mentally add Lake Powell as a place I must revisit at a later date. 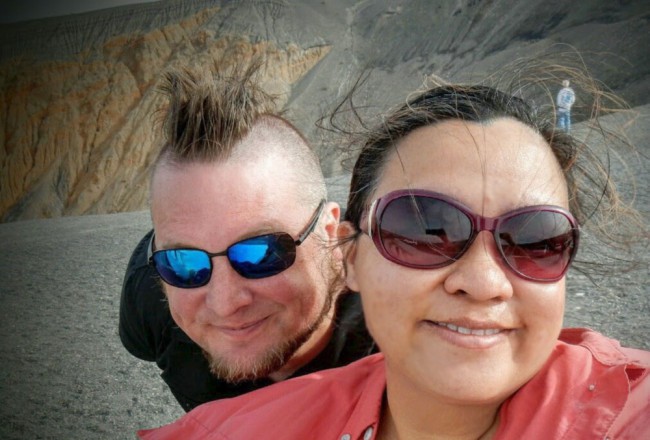