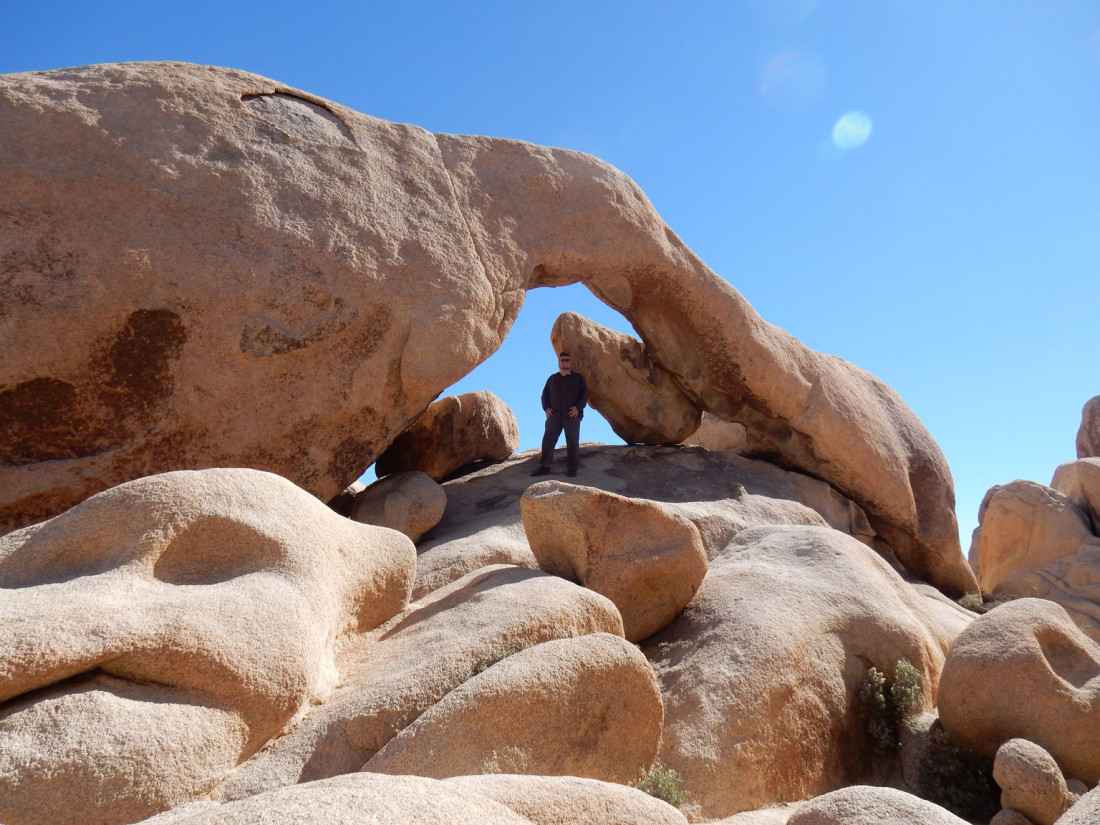 The amazing views of Joshua Tree National Park griped us so well on our first trip, that returning for a longer stay seemed natural.  One month later, and there are some notable differences in the wildlife: the weather was considerably warmer, birds and lizards were active, some wildflowers were blooming, and even the alien ocotillo plants were starting to green out.

Our visit this round included, Mastodon Peak down by Cottonwood Spring.  This hiking trail is different than many of the other trails because it’s located in Colorado Desert portion of the park.  Instead of Joshua trees, palo verde trees, fragrant creosote bushes, spiny cholla, tall spindly ocotillos grow. At the spring, the California Fan Palm, the only palm native to California, grows hardy. The trail to Mastodon Peak offers spectacular views and is a  geology playground. When we took a pit stop, a Costas hummingbird hovered so close to us that I could see its purple plumage. Along the trail, tiny Long-tailed Brush Lizards and Western Fence Lizards sunned themselves on rocks. When we reached the top, the day was clear enough that we saw the glimmering Salton Sea from the top. 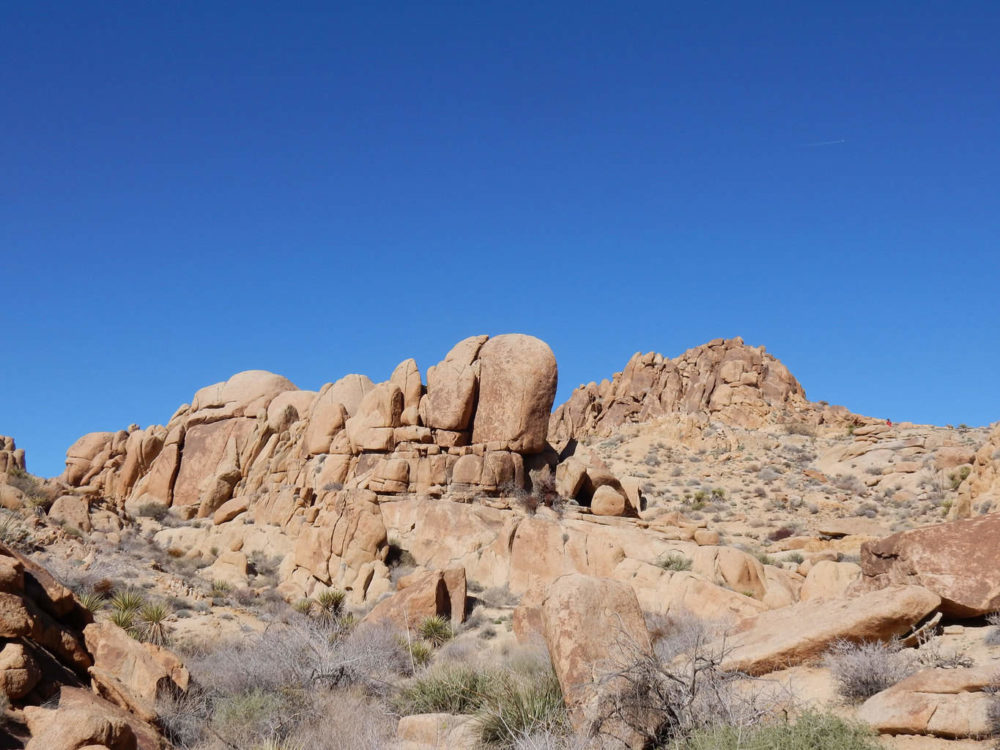 Our second hike took place at Barker Dam in the Mojave Desert half of the park. The dam is a water-storage facility built in 1900 by early cattlemen to water their herds. Along the first half of the trail cacti, California juniper, Joshua trees, honey mesquite, desert almond and deer grass grow abundantly between granite rocks.  At the Barker Dam, we smelled the water before we saw it.  Along its muddy banks grow Goodding’s Willow trees and invasive grasses next to cholla and prickly pear cacti.  On the 2nd half of the trail, features a flat lowland wash where the water would have normally gone if the dam didn’t prevent it.  We found artists painting sceneries among joshua trees, yucca, creosote bushes, muller oaks, junipers and Cat’s-claw acacia — a plant known for its sharp curved thorns on its branches. One plant is named cheesebush (ambrosia salsola) because it kind of smells like cheese. I even caught a quick glimpse of a Kangaroo rat escaping down a hole. There’s also a short side trail leading to a rock with petroglyphs, left by migrating Native Americans who painted the pictographs on the ceilings and walls of rock shelters near water sources. 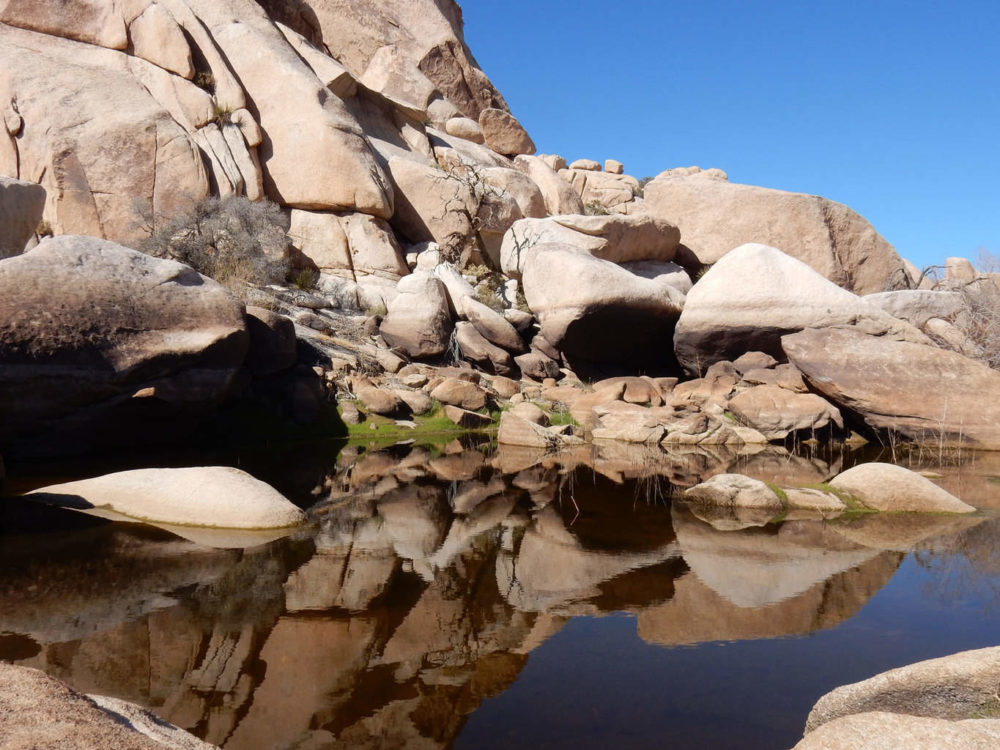 For our third hike, we went back to White Tank Arch trail, where large boulders of white tank granite bulge from the ground forming abstract shapes due to erosion by wind and water. We stopped at the arch, which we missed on our last trip. Apparently, the arch is formed by water will dissolving the minerals on the rock surface. The water also seeps into tiny cracks causing them to expand and contract with temperature extremes. Bits and pieces of rock fell away over time and exposed new pieces to the elements. The Wind also wore away bits and pieces to shape the arch. One day the arch will tumble, and be replaced by other unique shapes and forms. 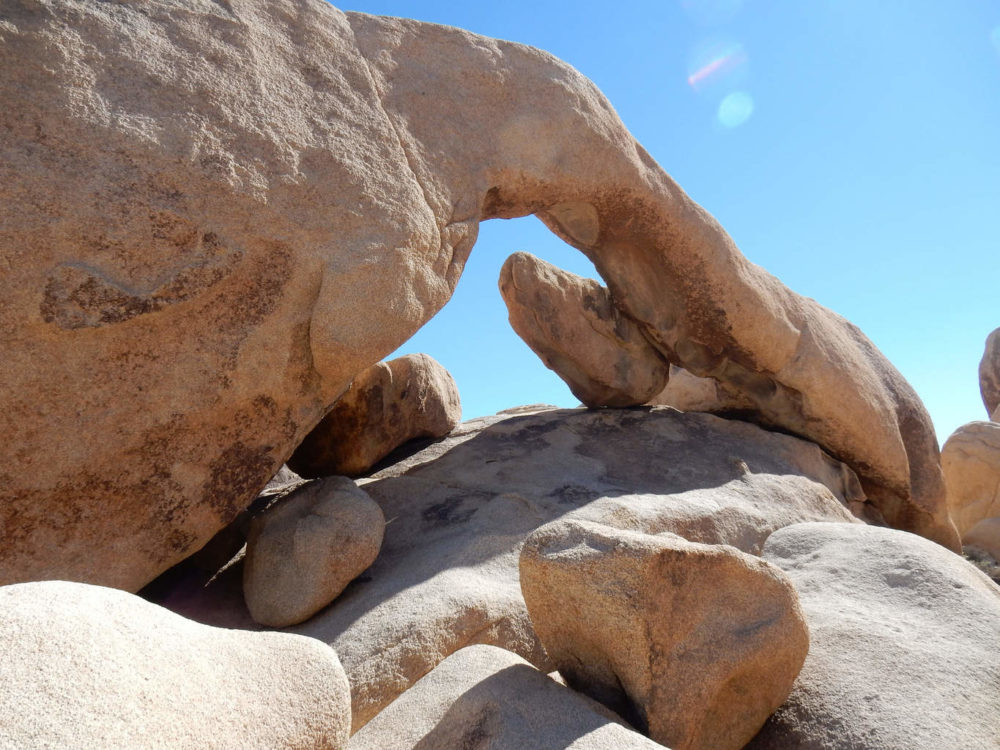 Finally, we took a turn around Cap Rock, named so because of a rock capping a giant white tank. Cap Rock is also home to this odd little memorial (which kind of looks like graffiti and a mound of rocks from a distance) to Gram Parsons on the north side. Gram Parsons was a musician who played with bands like the Byrds . He loved Joshua Tree and spent hours looking up at the sky waiting for the UFOs to fly by. In 1973, he died of a massive drug overdose. As his body was being flown back to Georgia via LAX, his friend Phil Kaufman snatched Parsons’ coffin off the freight ramp. Kaufman and an accomplice brought the body out to Cap Rock, laid it on the desert floor, and set it aflame in a macabre little ceremony, trying to fulfill Parson’s death wish. The two men were arrested soon afterward but were released when it was found that no California laws prohibited body-snatching or impromptu cremations. Makeshift memorials and inscriptions are cleared by the park caretakers regularly. Funny enough, Parson’s incineration actually happened a quarter mile away from Cap Rock, but people keep coming back to this location. 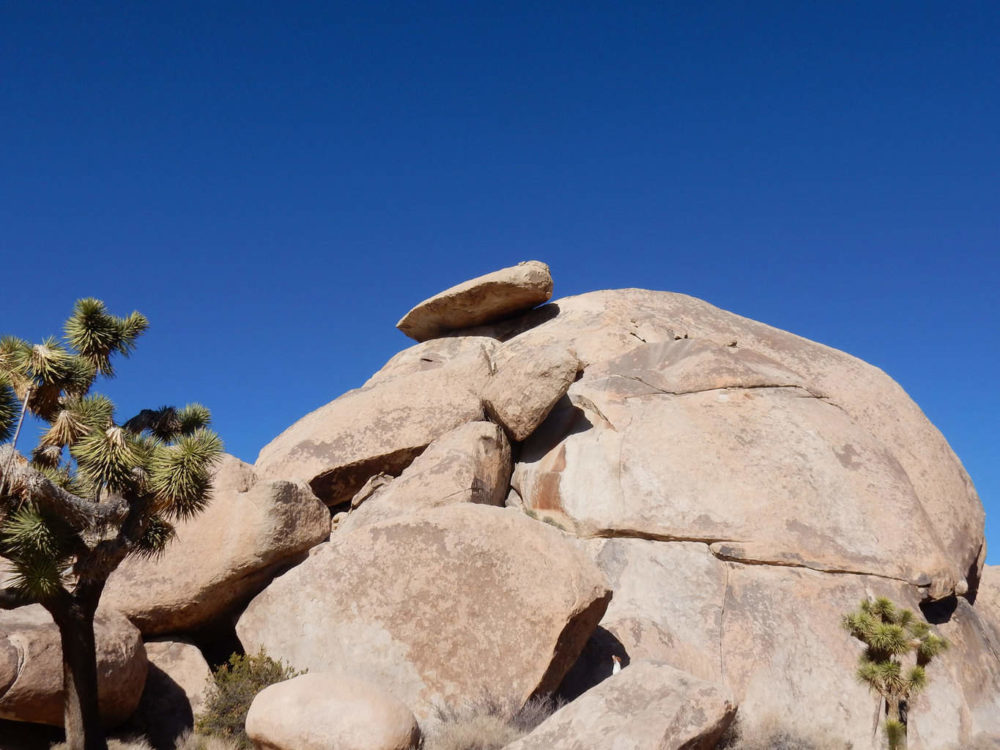 As we drove back to our trailer at the end of the day, we spotted a wild jack rabbit and later a coyote, which we trailed as far as we could on the road. I really had fun at this national park with its abundant wildlife, stunning desert views, and fascinating history. Just worth a multi-day visit for the adventure goes. 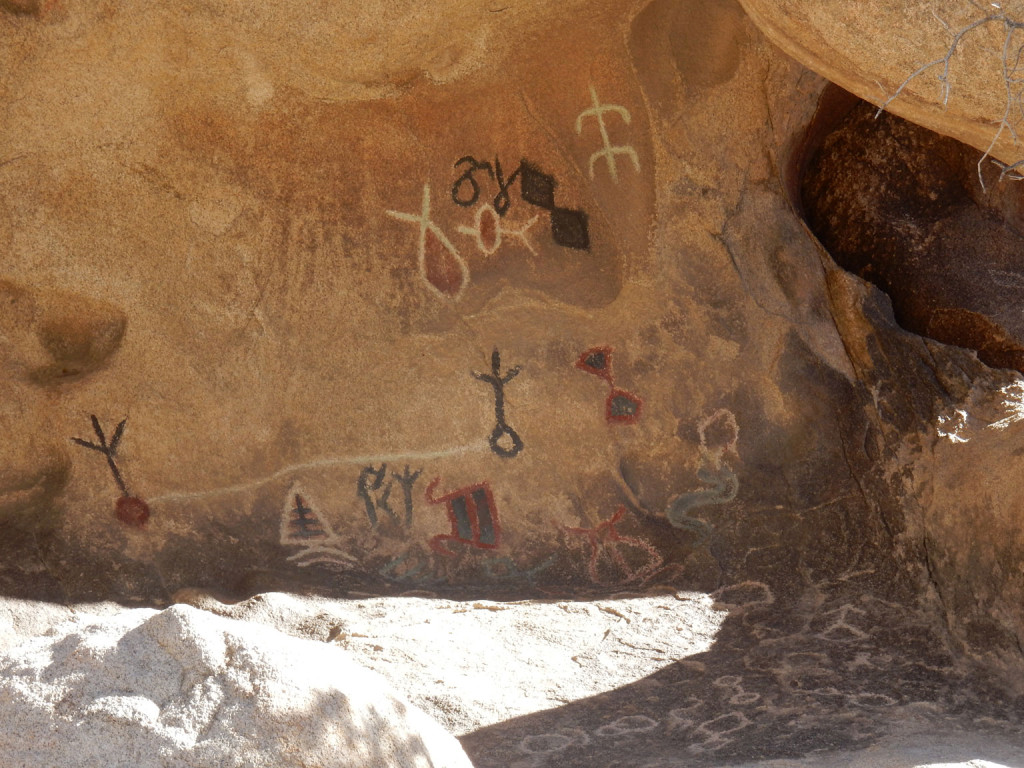 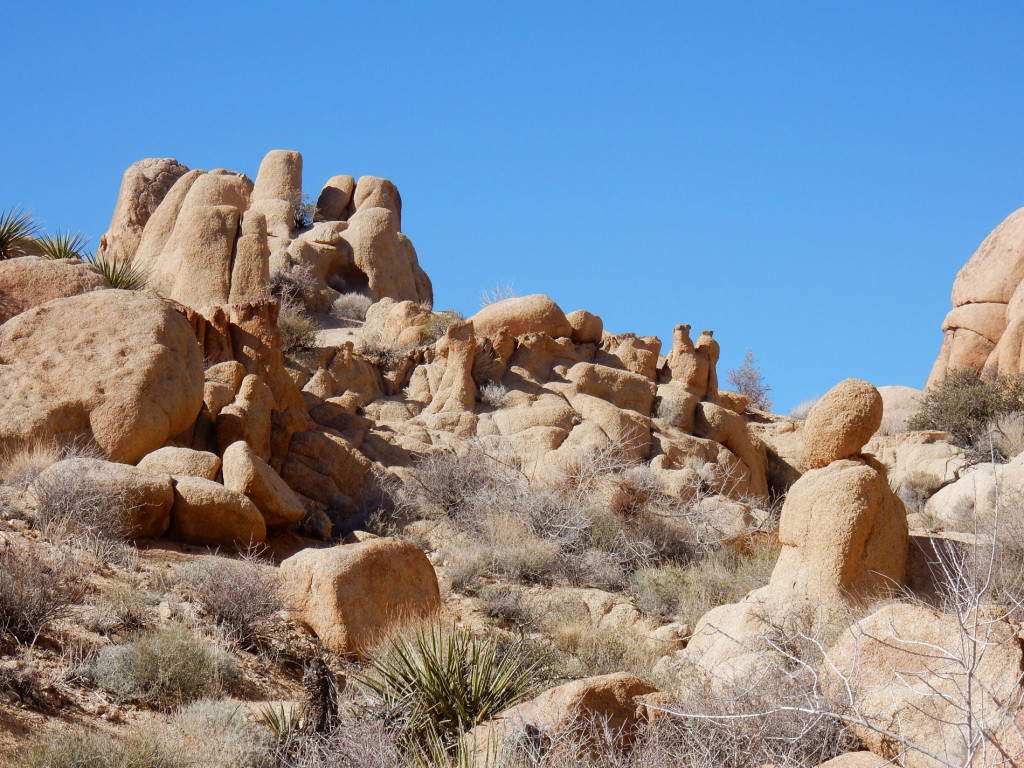 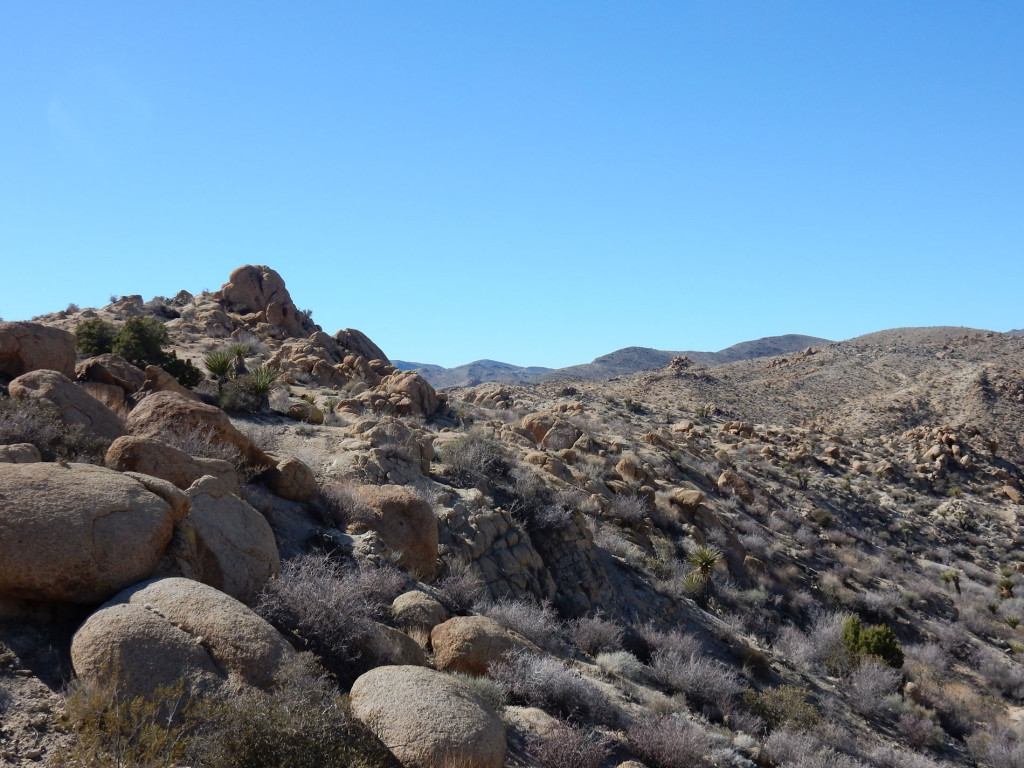 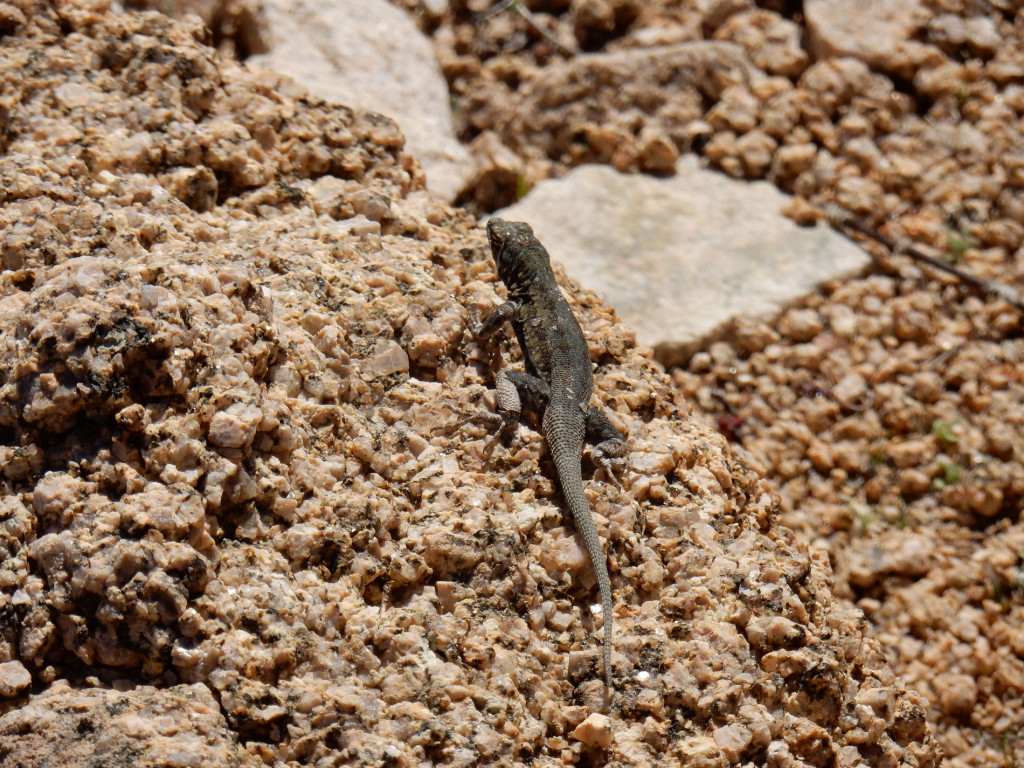 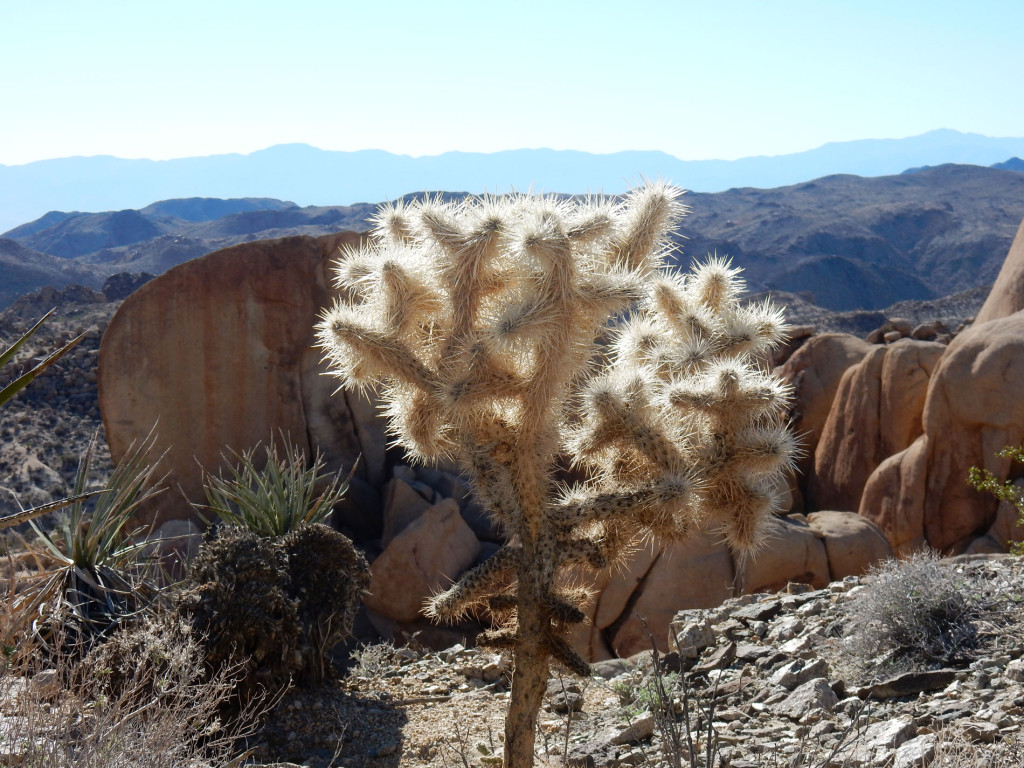 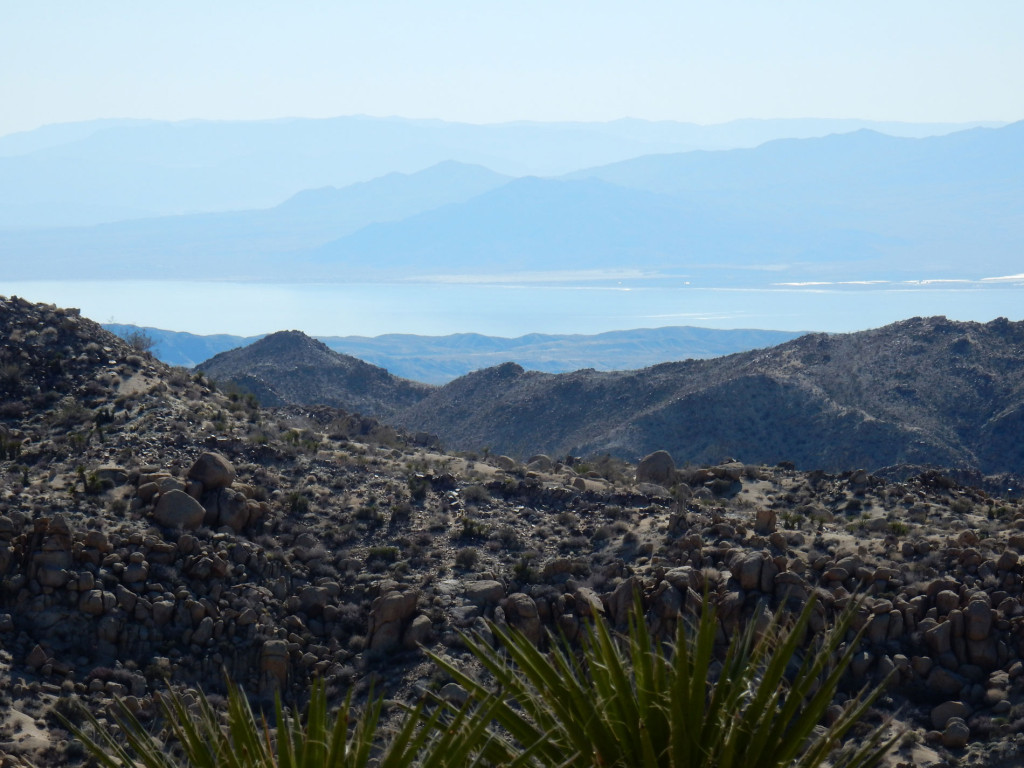 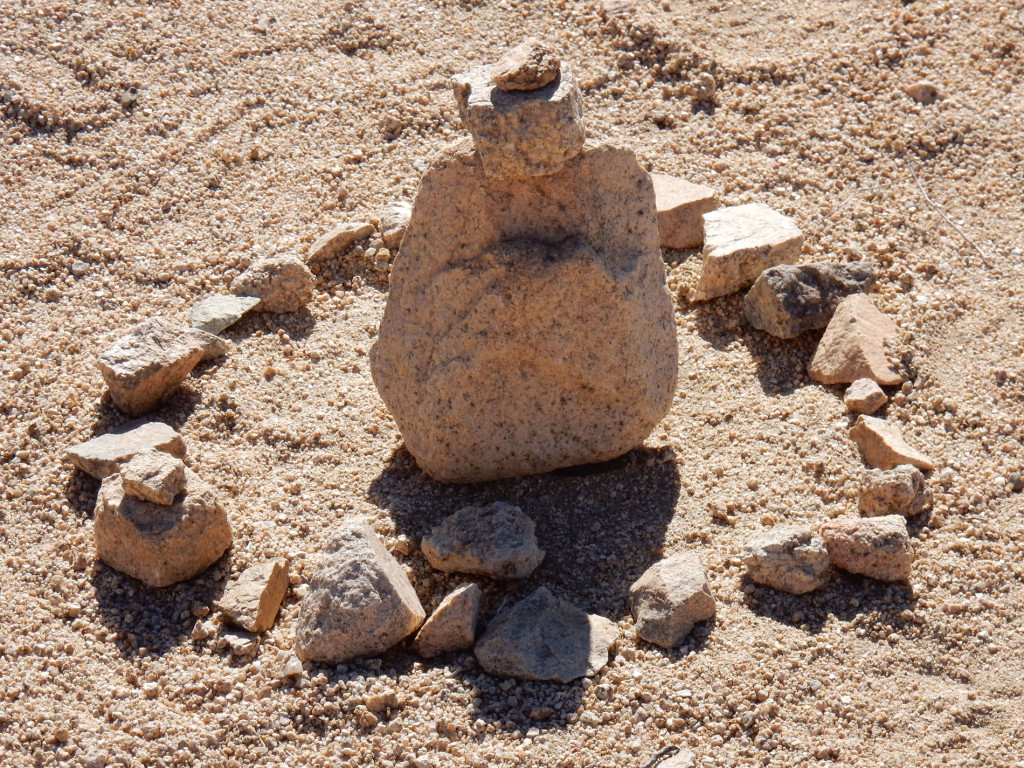 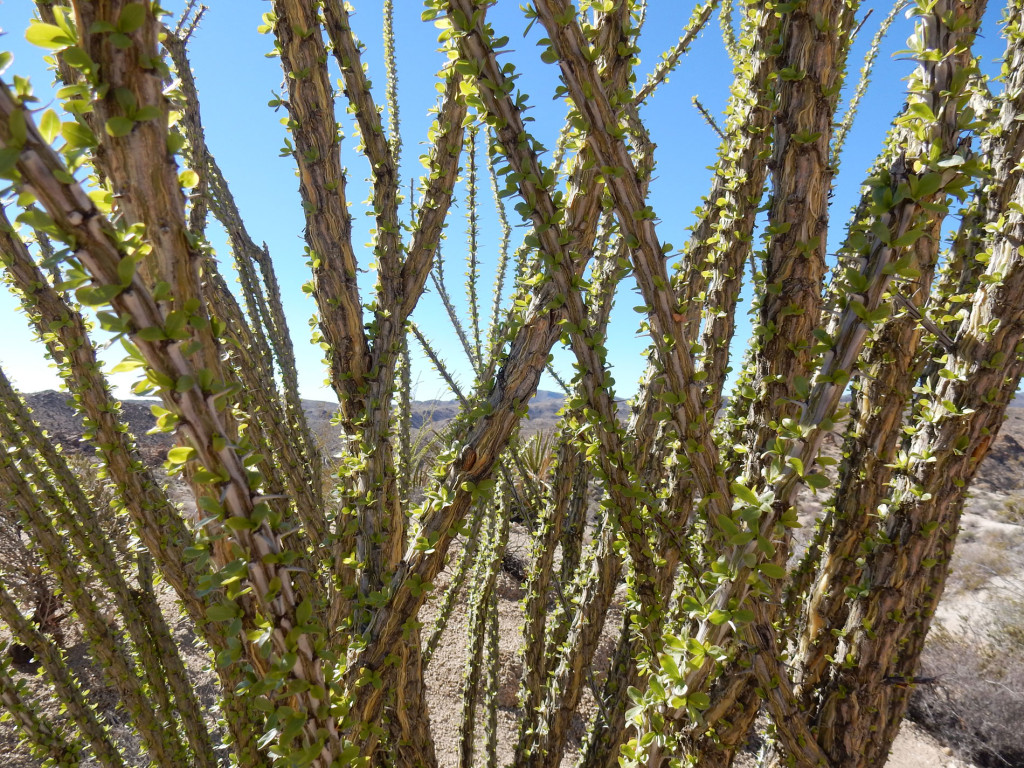 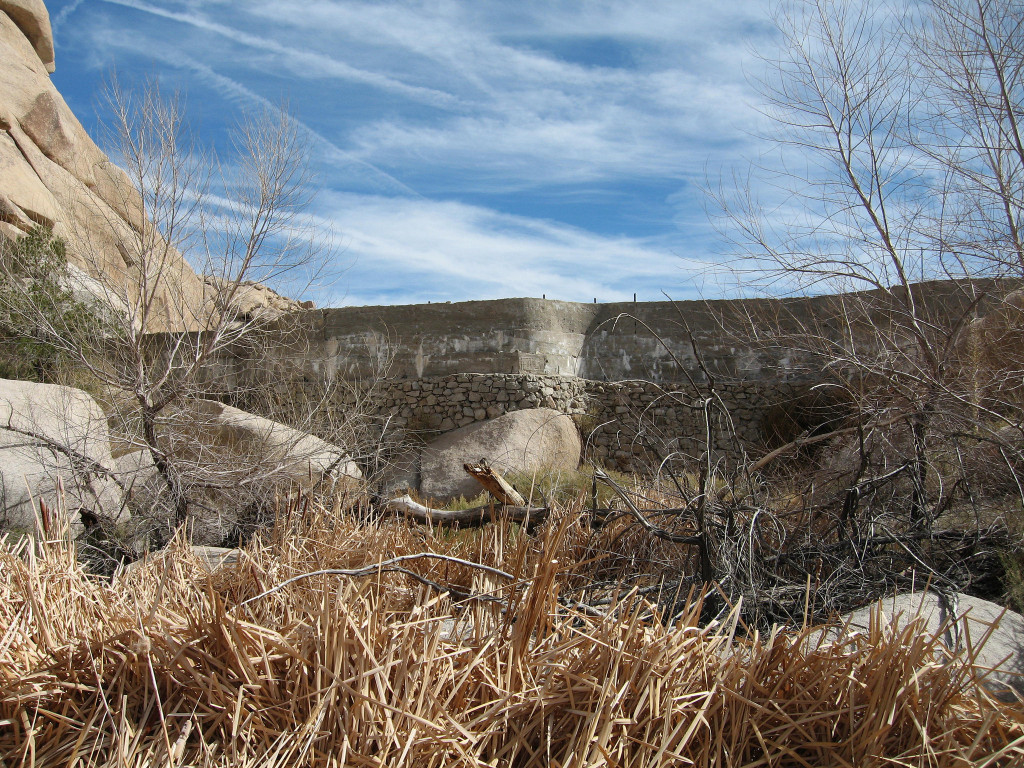 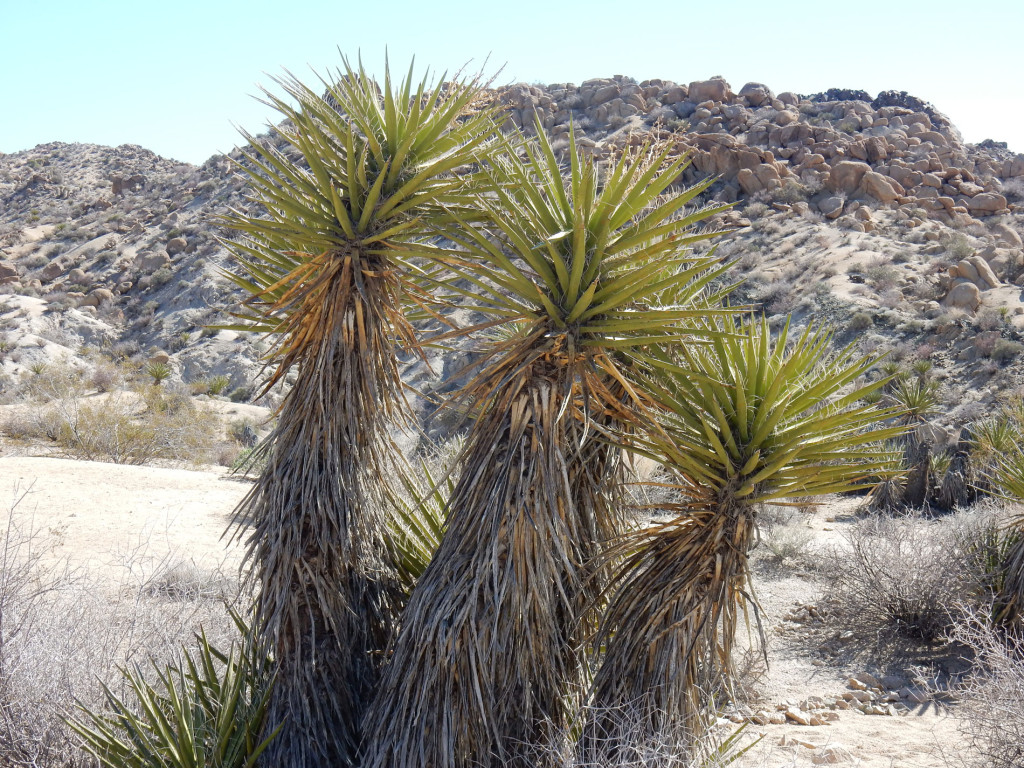 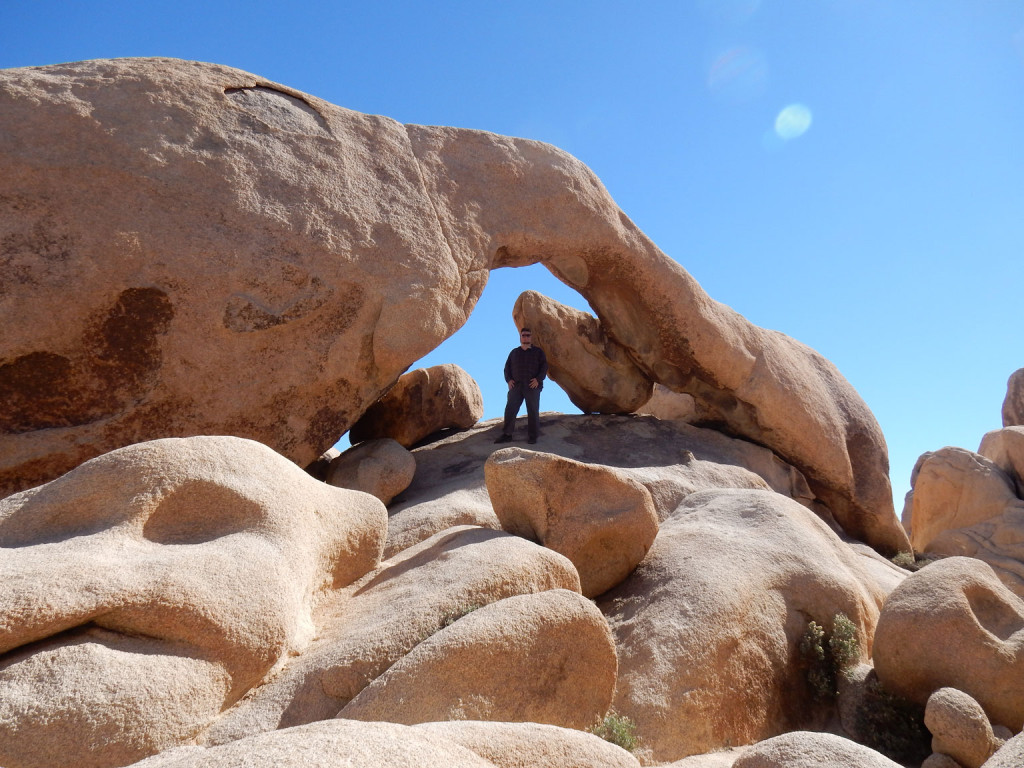 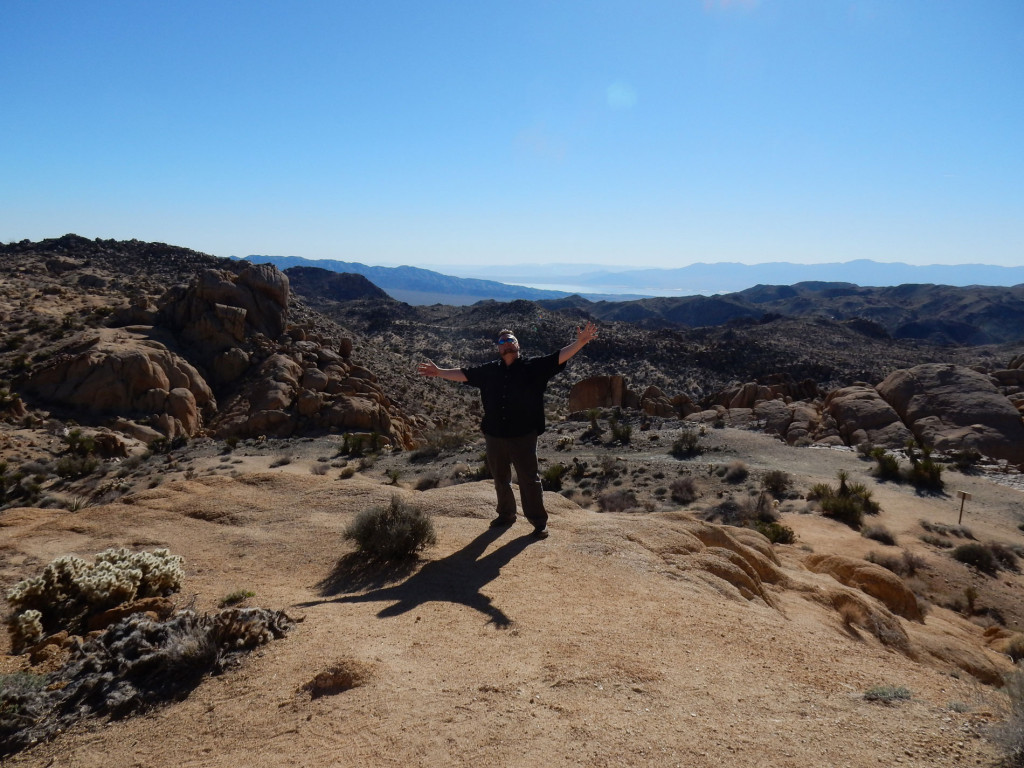 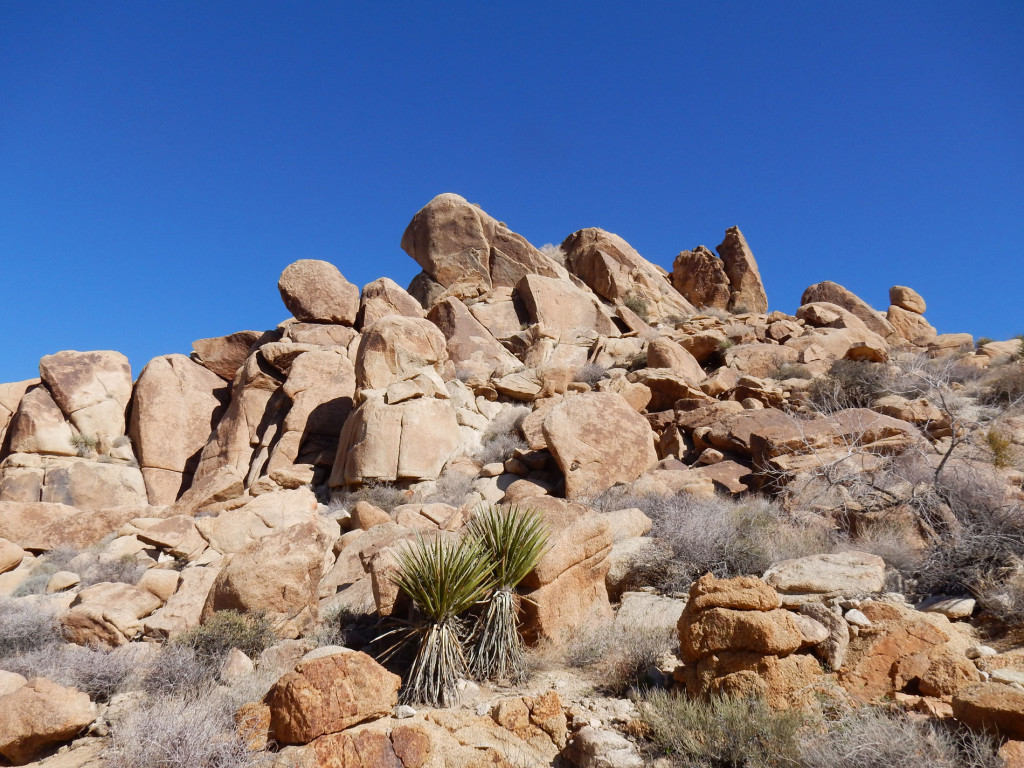 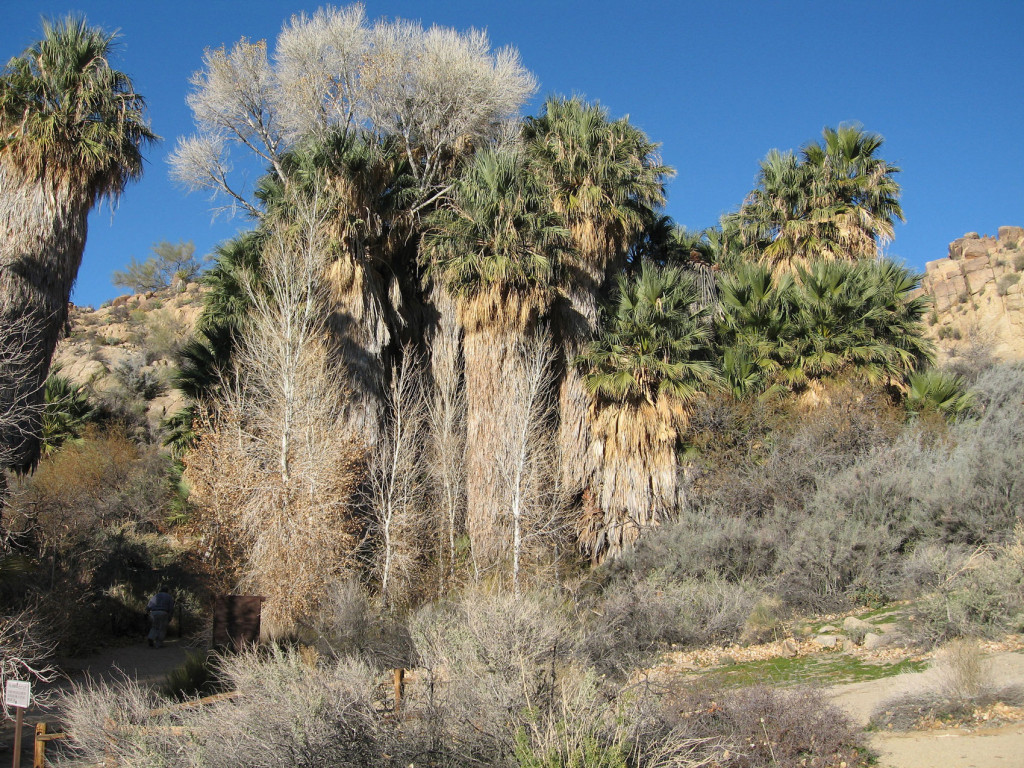 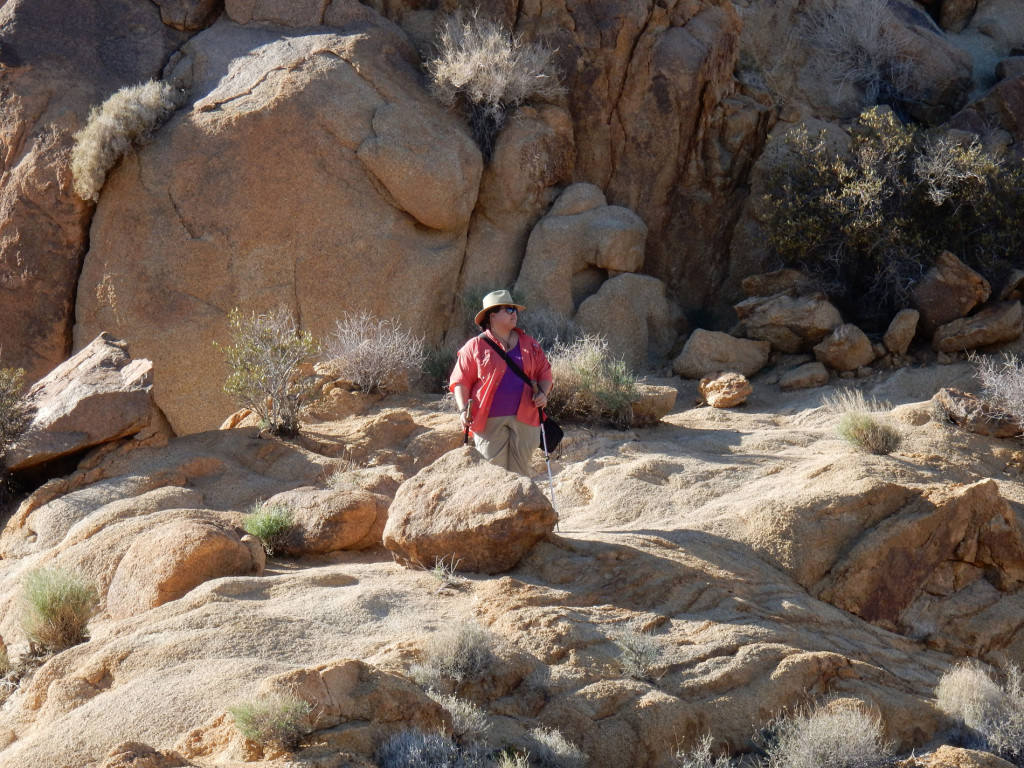 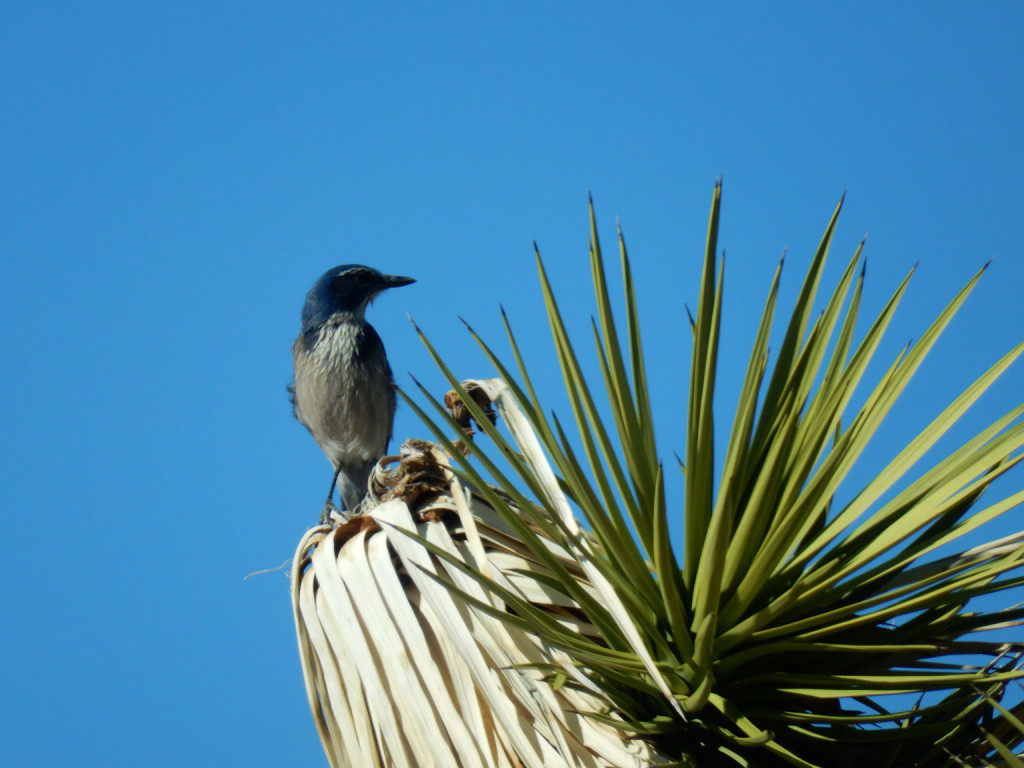 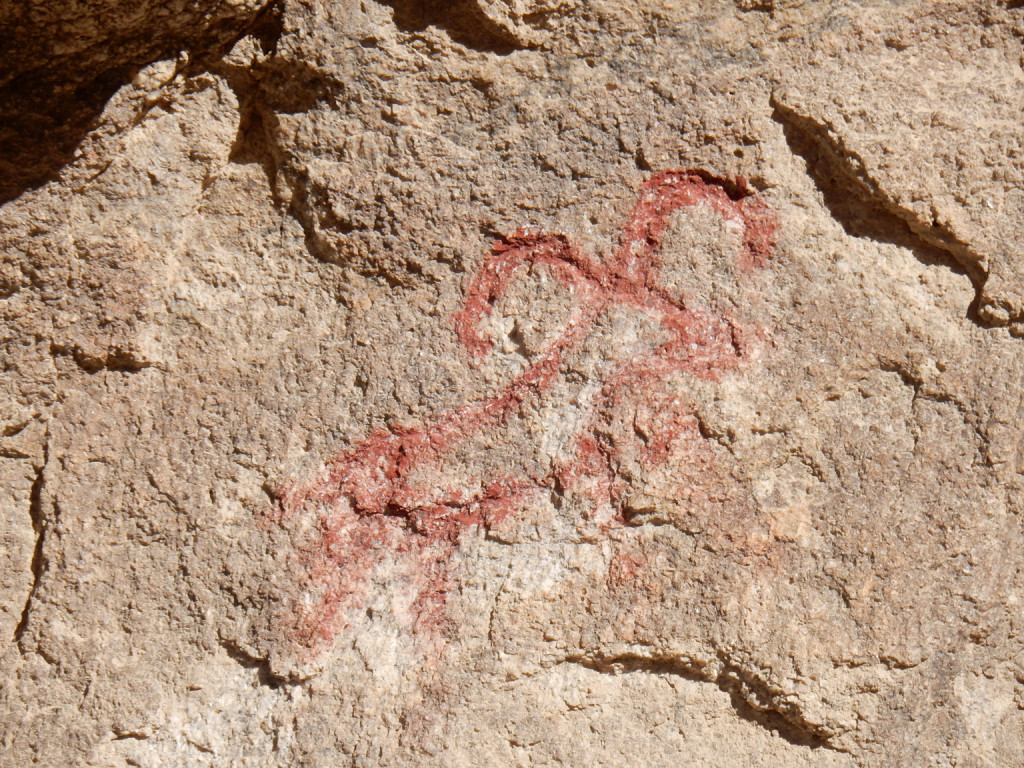 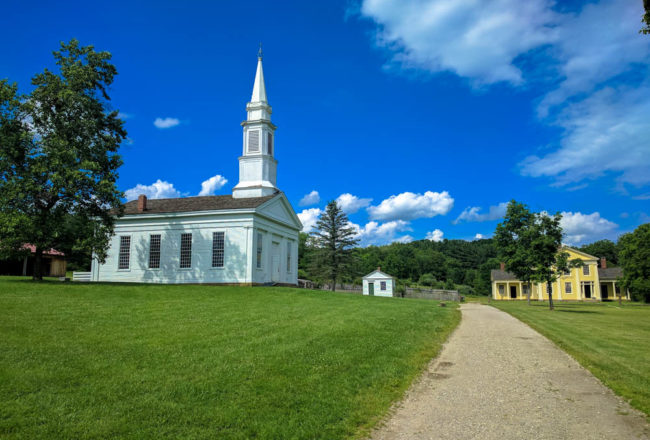 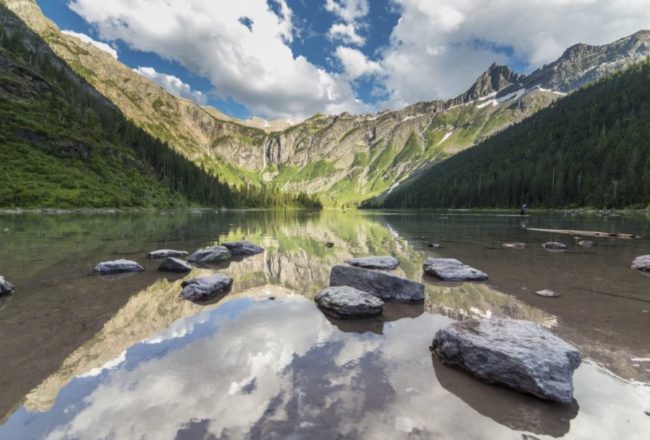