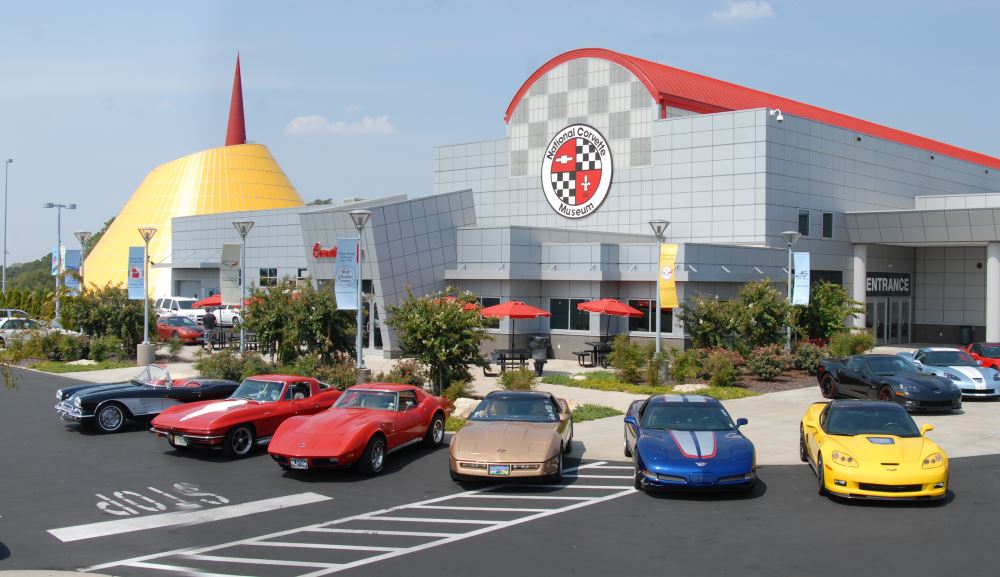 There are some places Trail and I go purely out of curiosity. Bowling Green was on our way from the Smoky Mountains to Ohio and while there, we decided to pay a visit to the National Corvette Museum. Neither of us are car enthusiasts but we both enjoy learning about them in a museum setting. We had a great time visiting America’s Car Museum in Tacoma, Washington so we figured we would enjoy this one as well. When we arrived, we discovered that you could not only tour the museum, but also the factory a few blocks away. We decided to do both. 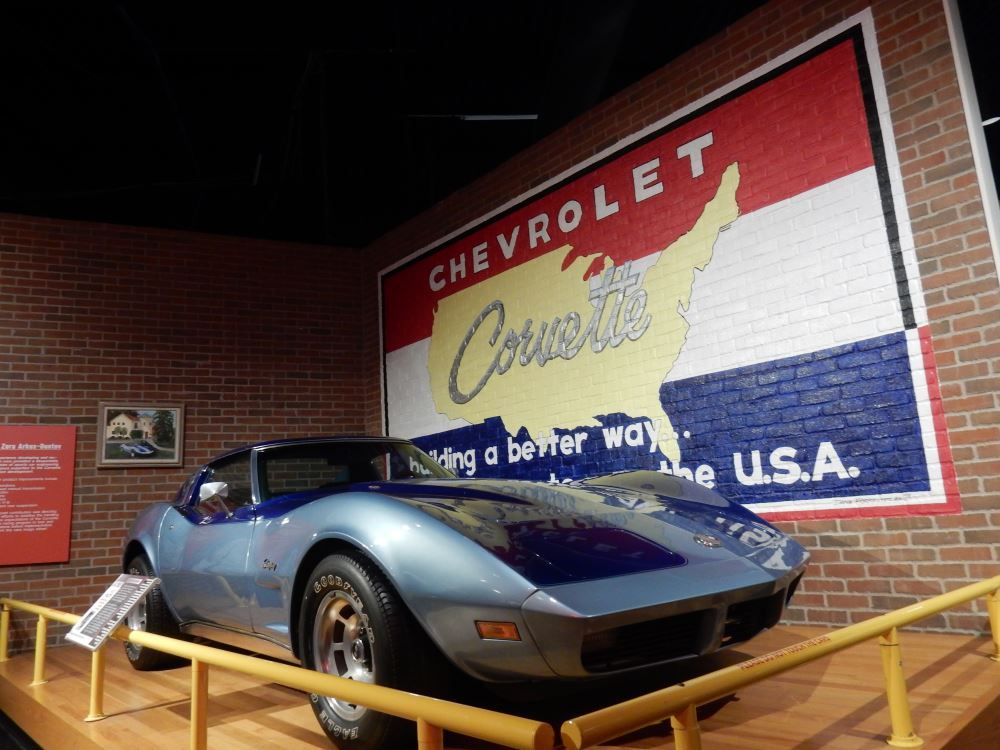 It’s time to look at some cars! This is the Corvette that I grew with and most recognize as symbolic of the brand.

In case you don’t know, the Chevy Corvette is a classic American sports car first produced in 1953 and continued right up to the present. Early editions were smaller, nimble cars. Later generations became more muscle-car oriented, sporting bigger engines, but maintaining a sleek styling honoring the original designs. As sports cars go, they are on the affordable end of the spectrum with the 2017 models starting at a little over $55K and going up from there. The top of the line z06 model starts at $85K and was rated by Car and Driver as the #1 high-end sports car despite costing half of the others in the same category.

The museum tour starts off with a film that covers the development of the different models of Corvette over the years. The current generation is #7 and just came out this year, so we came at a pretty cool moment in the car’s history. After the film, you go through a series of dioramas showing the cars in settings contemporary to when they were made. This part of the museum has a lot of information about pivotal moments in the car’s story. The focus is on the individual cars on display and important people who made or drove them. 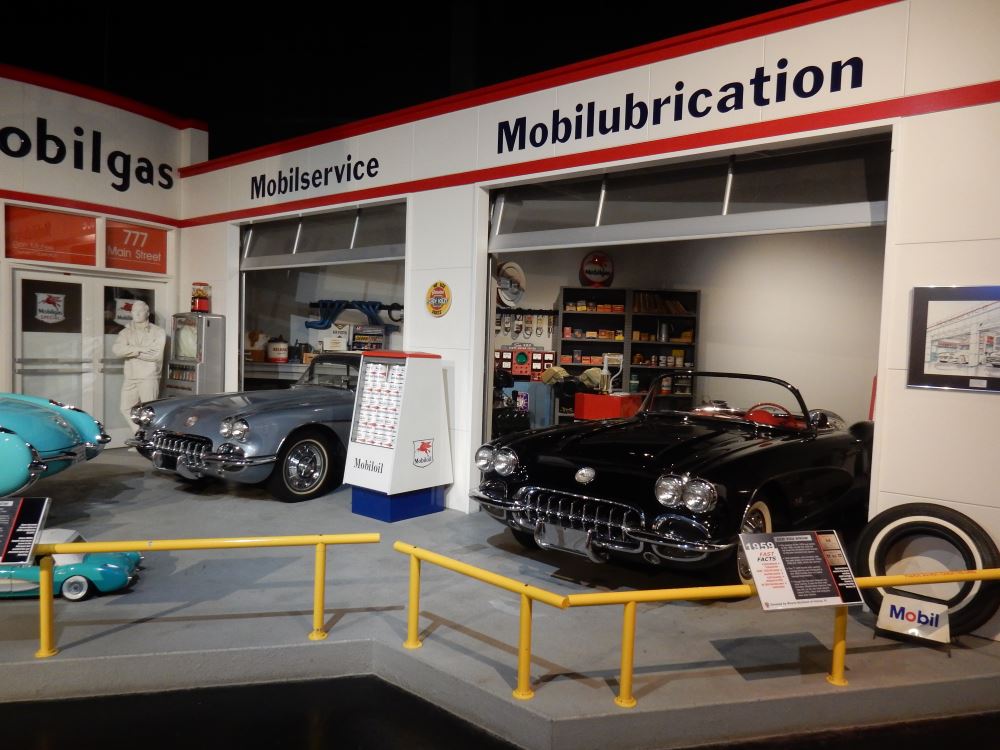 I really liked these period dioramas that put the cars in their “natural” environment.

The next portion of the museum is dedicated to the Corvettes history as a race car. They have quite a few racers on display, along with stories of their drivers and the races they won. These cars can be pretty interesting in that each one is customized in various ways by the drivers or teams that ran them. Each has its own unique history and personality. Both Trail and I lingered quite a while in these first two sections, only to realize our factory tour would be starting pretty soon so we had to make our way quickly through the rest of the museum. For this reason, I recommend doing the Factory Tour first, then hitting up the museum afterward.

We zipped by the Corvette play room which had lots of hands on stuff for kids to do and made our way into a really cool part of the museum. The grand showcase is a large domed room called the Skydome where they have a rotating display of some of the most famous and cool Corvettes. Amazingly enough, in 2014 a sinkhole opened up right under the skydome and 8 of their cars went crashing into a 50′ deep subterranean pit. 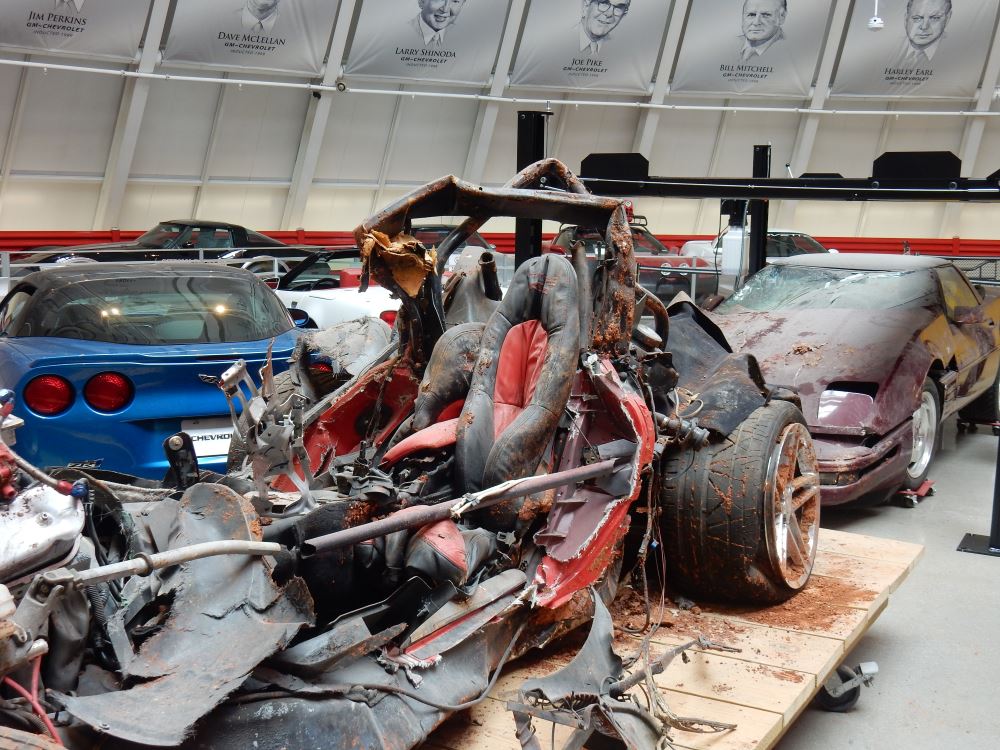 This was the car that suffered the most extensive damage during the fall.

Not only did the Museum re-build after the event, but they made an exhibit out of the event itself. The hall leading into the Skydome details what happened, why, and how they tackled the problem afterward. You can read the international news reports, look at models of the caves beneath the Skydome, and see exactly how they rebuilt it. They even have a remote, live camera inside the cave that you can move around to get a look at their handiwork. Perhaps best of all, inside the Skydome itself, they have preserved the wrecked Corvettes themselves in all their mangled misery.

Having spent what little time we had left marveling at the Skydome and its dramatic story, we really had to hustle out of the Museum to make our factory tour appointment. 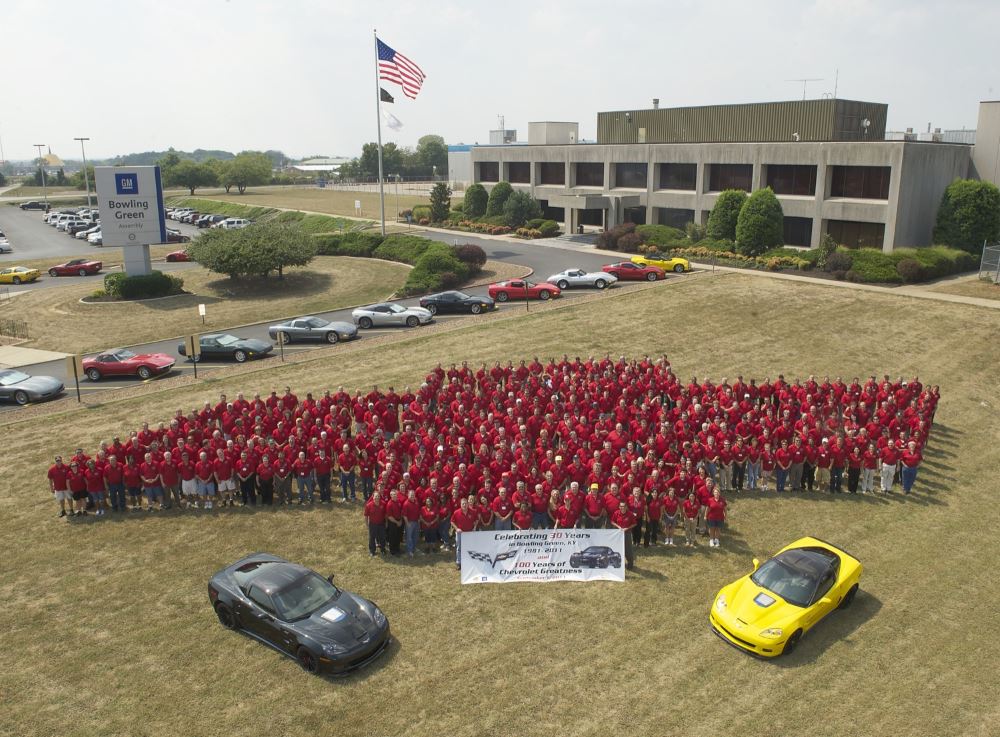 It was very clear that everyone we met was incredibly proud of the work they do.

The Corvette Factory at Bowling Green is a short drive from the museum. Not surprisingly, you encounter a lot of Corvettes on the streets even in this short distance. On arriving they take your ticket and usher you into a large meeting room for orientation and a safety lecture. A short film tells you the basics of what to do and what not to do during your tour. They then hand out safety goggles and earplugs. Our tour was led by a lifetime employee of the factory and a member of the union that represents the workers there. His pride in the company, the cars, the workers, and the plant were all evident as he showed us around.

The factory floor itself is a real marvel of modern manufacturing. Ford’s pioneering technique is still at the heart of Chevy’s operation as a belt carries the cars through every stage of production. Along the way, workers perform specific tasks to assemble the vehicle and ensure it meets assembly requirements. While there are robots here and there, for the most part, they are in assistance to union workers. The machines do the heavy lifting, and the people guide them control the action. Everyone we saw seemed pretty happy in their work and it was clear a lot had been done to create a safe work environment. 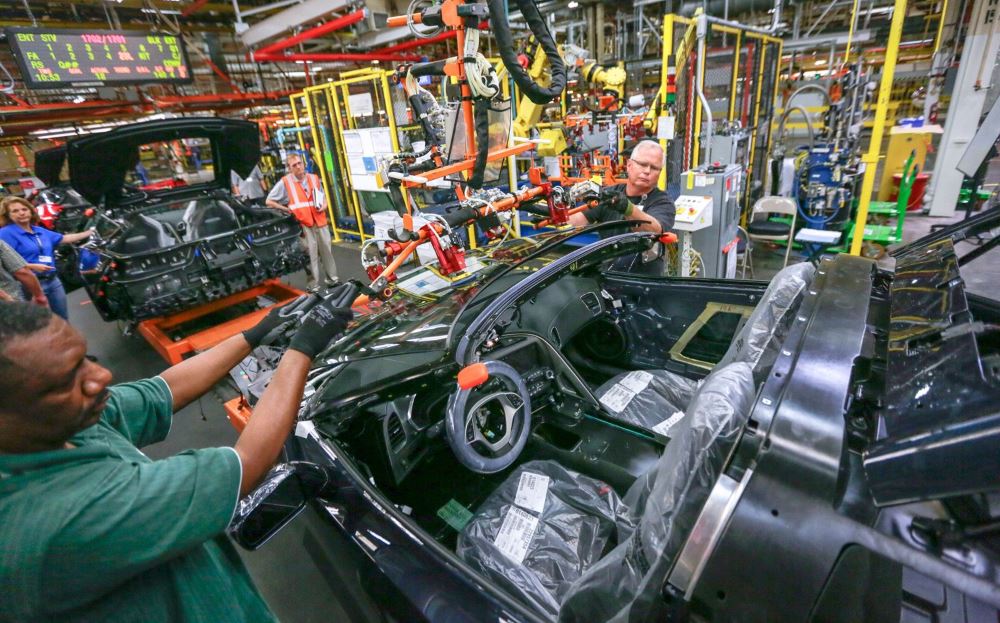 You are not allowed to take photographs in the factory so most of the images here are from their press kits.

Unlike some tours I’ve taken, this factory was designed specifically to accommodate tour groups. A designated path wound its way through the factory floor with areas for people to gather up and hear about the different stages of the manufacturing process. This not only makes for a good tour, it keeps the tours from endangering the workers or the production line. One stop I found especially interesting was the engine room. While some of the engines are built off site, if you order the top of the line model, it is made in the plant. Furthermore, each engine is only worked on by a single individual worker. If you pay extra, you can come to the plant and build it yourself under the supervision of one of their engine builders. Pretty cool!

Most impressive to me was the quality control scheme they used. Every power tool was precisely controlled for perfect torque and there were multiple QA stations in the manufacturing line to detect and correct any problems that arose in the prior stages. At least as much effort went into ensuring work was done correctly as doing the work itself. I asked quite a few questions about the process on my tour and I was constantly impressed by the answers. They have one of the best quality assurance processes I’ve seen at any company.

At the end of our tour, they gave one young woman the opportunity to drive one of the newly finished cars of the assembly line. It was her birthday and she was absolutely delighted. They duly warned her husband he could end up spending far more on her birthday than he’d anticipated! All said it was a fascinating tour and a good deal of fun. I highly recommend it to anyone, even if you are not a car enthusiast. But be careful, you could end up buying one of these beautiful cars. 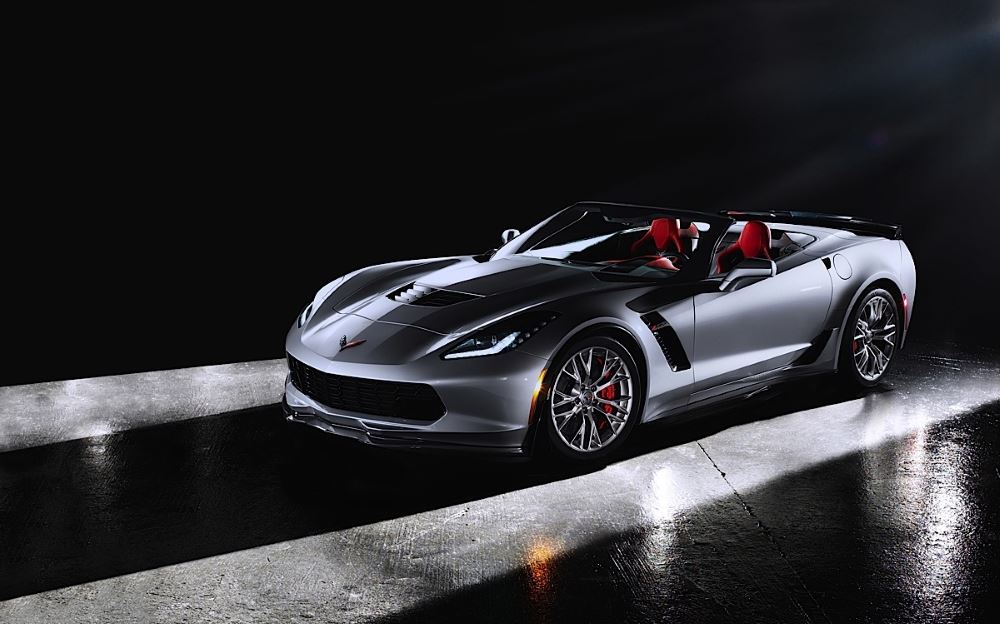 This is a very sexy car!