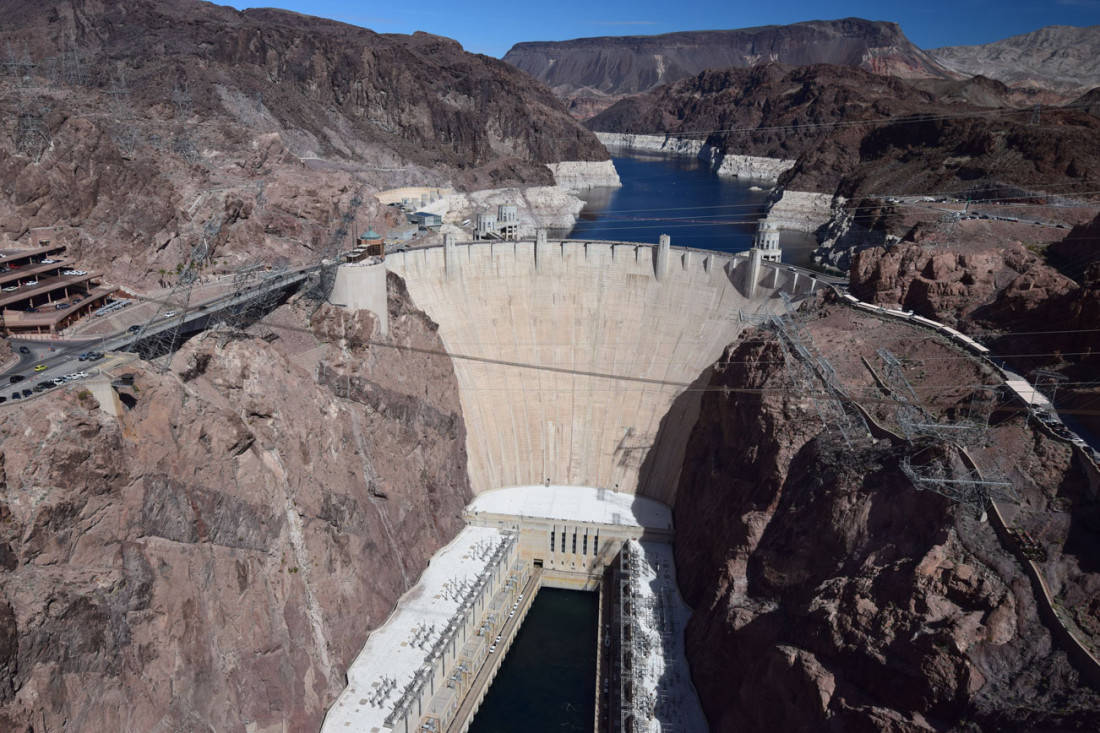 We took a half-day trip to Hoover Dam, an American engineering icon built by thousands of workers and cost over a hundred lives in the Great Depression. This majestic concrete arch-gravity dam holds back the waters of Lake Mead, United States’ largest reservoir by volume. Next to Hoover Dam is another engineering marvel, the Mike O’Callaghan-Pat Tillman Memorial Bridge, also known as the Hoover Dam Bypass.

When we first entered the dam area it was around 10am and the place was crowded for a Wednesday morning. I can’t imagine what this place is like during the weekend. One thing that surprised me, was the security checkpoint and a police force specifically dedicated to Hoover Dam. After a bit of research, I discovered that the security check was set in place after the 9/11 attacks. Since we drove a truck with a tonneau cover, we were asked to pull aside for further inspection of the truck bed. Other than that bit of curiousness, we had a fun time exploring. 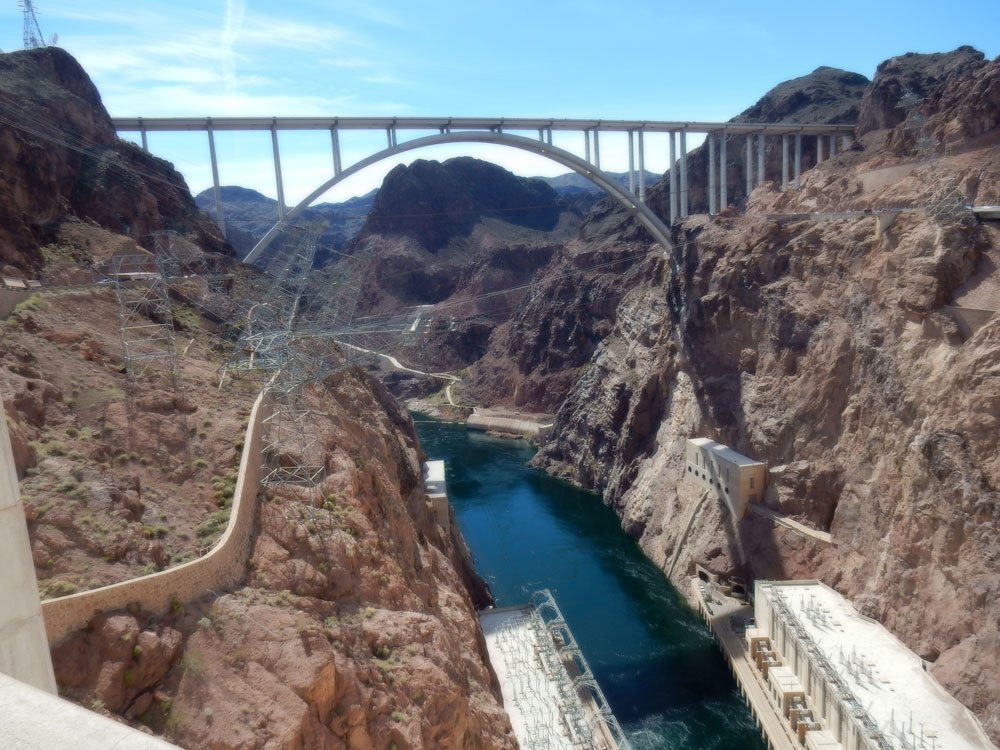 Our first stop was the Mike O’Callaghan-Pat Tillman Memorial Bridge, which is quite the mouthful to say out loud. Before the new bypass, the heavily traveled US 93 ran along the dam’s crest. O’Callaghan was a former governor of Nevada and former executive editor of the Las Vegas Sun. Tillman was a professional football player for the Arizona Cardinals who joined the Army in 2002 and was killed in Afghanistan in 2004.

Standing 890 feet above the Colorado River, the walk across the bridge provides a pretty stunning view of Hoover Dam itself. Suspended by a 1,060 foot win-rib concrete arch, the bypass is the largest of its kind in North America. The total span is 1905 feet, and if you stand in the right spot you can gain and lose an hour many times as you like, since the bridge links Arizona and Nevada time zone border. Along the walk there are several kiosks and plaques that describe its construction, Hitch noted that some of the writing was so bad that it must have been copied and pasted from the original proposal and planning documents.

One interesting fact I discovered later, was that a series of wildlife-only over and underpasses protect the nation’s largest herd of endangered desert bighorn sheep from the heavier volume and faster speed of traffic on the modernized highway. Highway officials used radio collars and GPS to track the migratory patterns of sheep and other wildlife to identify optimal crossing points. 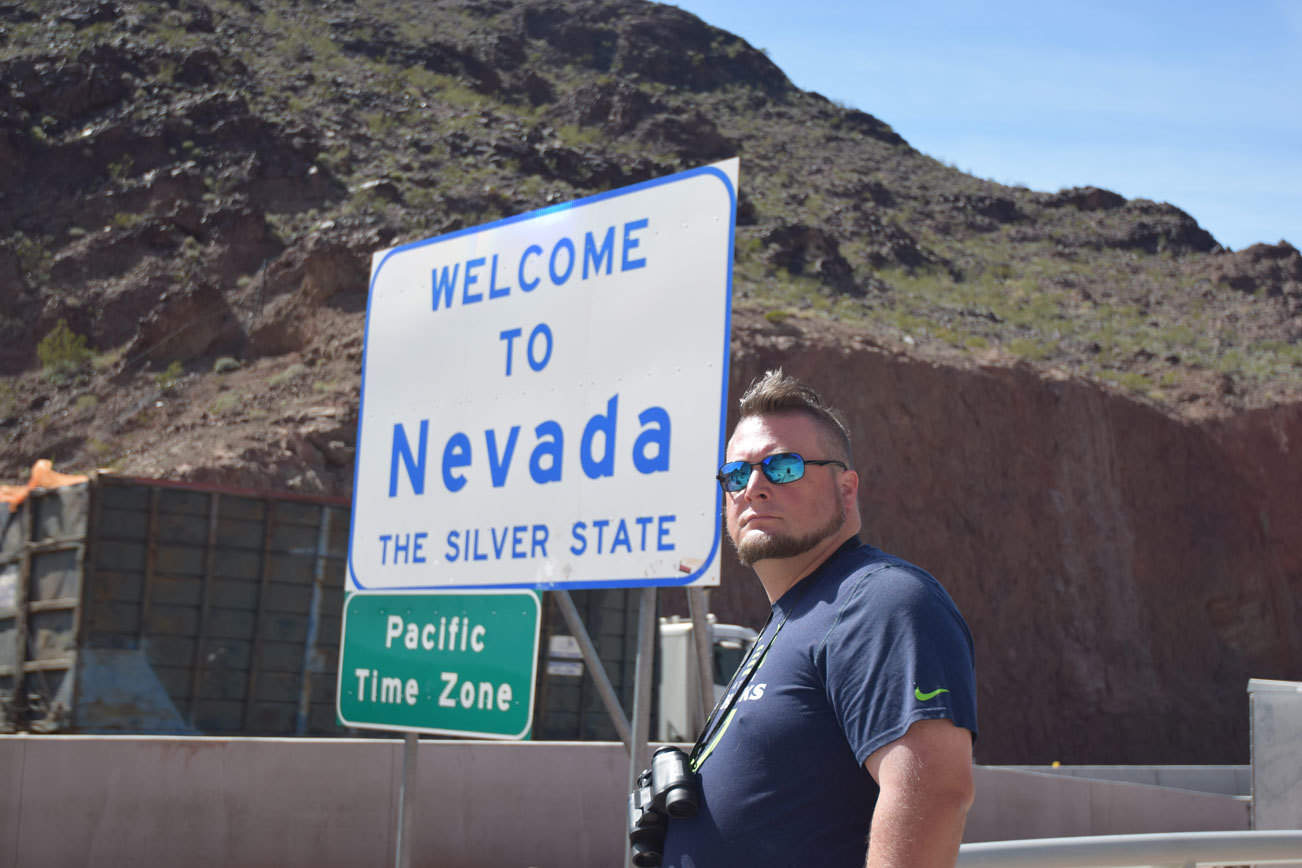 Welcome to a new Time Zone!

From the bridge, we made our way to Hoover Dam itself. Parking costs $10 per car and tours $30 per person. We skipped the tour and just enjoyed the walk across the top of the dam and various vistas. Hitch noted that Hoover Dam in Fallout Las Vegas seemed bigger, while I was searching for Gene Tonics and Vigors ala Bioshock due to the Art Deco styling.

On the dam walk, Oskar J.W. Hansen’s Winged Figures of the Republic memorial gave me some pause as I tried to work out its significance. Each bronze masterpiece was formed in a continuous pour. To move the large bronzes into place without marring the highly polished bronze surface, they were placed on ice and guided into position as the ice melted. An audio presentation at this site discusses the concepts the Mr. Hansen had in mind when creating the statues, as well as details related to the “star map” at its base. The map depicts the Northern Hemisphere sky at the moment of President Roosevelt’s dedication of the dam. This is intended to help future astronomers to calculate the exact date of dedication, which by the way was on September 30, 1935. There is also a detailed compass framed by the signs of the Zodiac just beyond the statues, and bronze seals of the seven Colorado River Basin states embossed just below the star map. Near by is a plaque commemorating the 96 men who officially died during the construction of Hoover Dam. Although there are records saying a total 112 men died creating the dam, since the contractors started work before it was officially approved by the government. 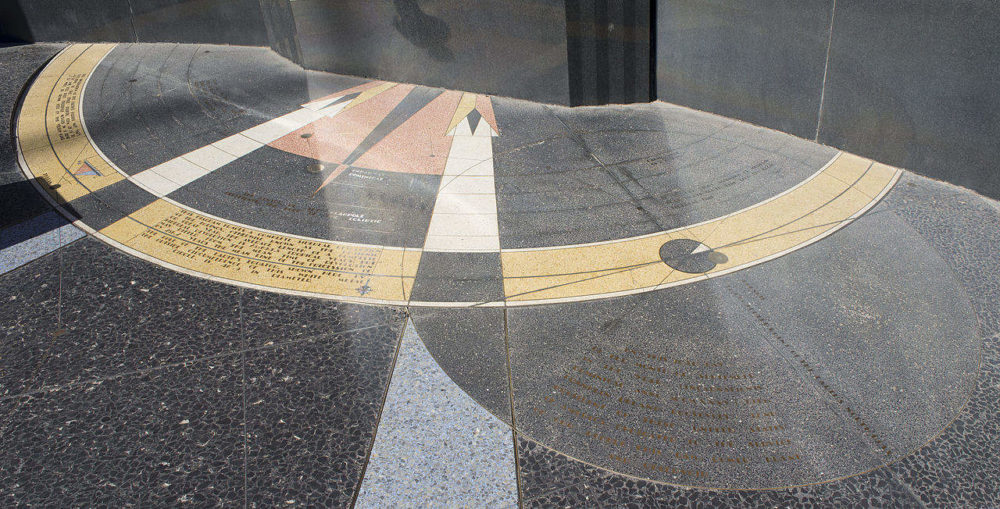 On the reservoir side the dam, stands four intake towers which draw water down into four penstocks and then through the powerhouse. Near by speakers give an audio presentation about the role these towers have and how the artwork was incorporated into the towers on the downstream face of the dam. I was surprised to see large bath rings along the cliffs and the water levels so low. I later found out that Lake Mead is at a record low and is currently at 39% of full capacity.

We also took a small stop in the gift shop. All I can say is that Hoover Dam gift shop wins for the award for the worst postcard collection ever. Uninspired photographs with clip art boarders, or eye bending collages of the local wild life cut out and super imposed over the dam were the standards and it got worse from there.

Beyond the dam, the old US 93 road (now called the Kingman Wash Access Road) ends at the Arizona side at a parking lot with a nice newly built gazebo overlooking the back of the dam and Lake mead.  There is a fun trail leading from Lake Mead Visitor Center to the Hoover Dam called the Historic Railroad Trail, and includes several hikes through old train tunnels.  We didn’t get to try the hike due to time constraints. 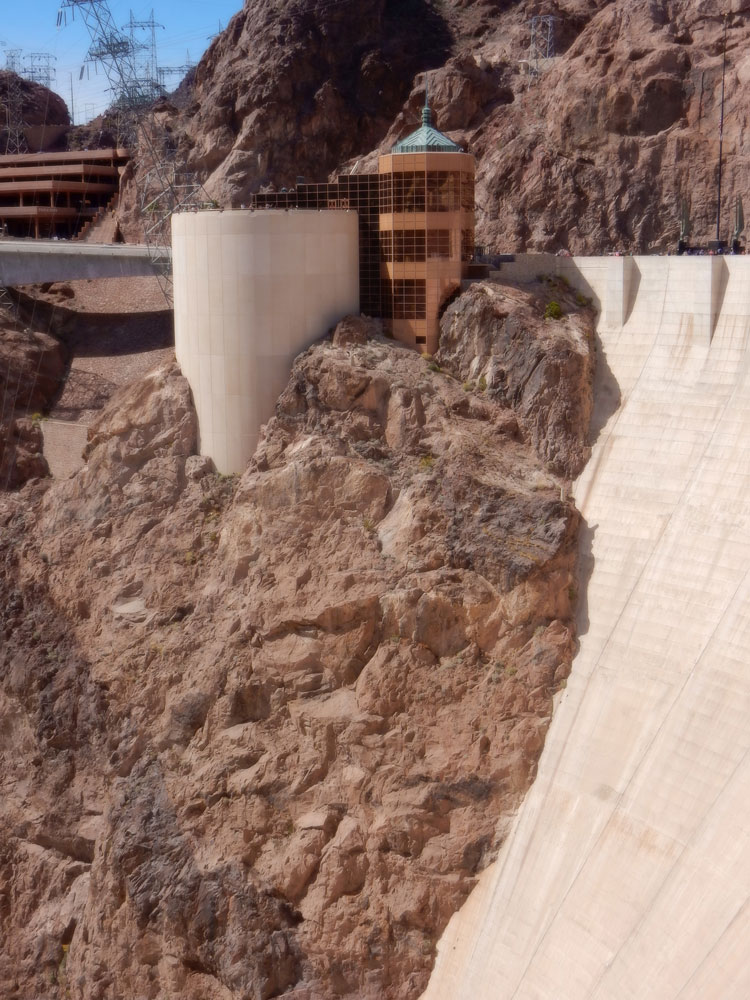 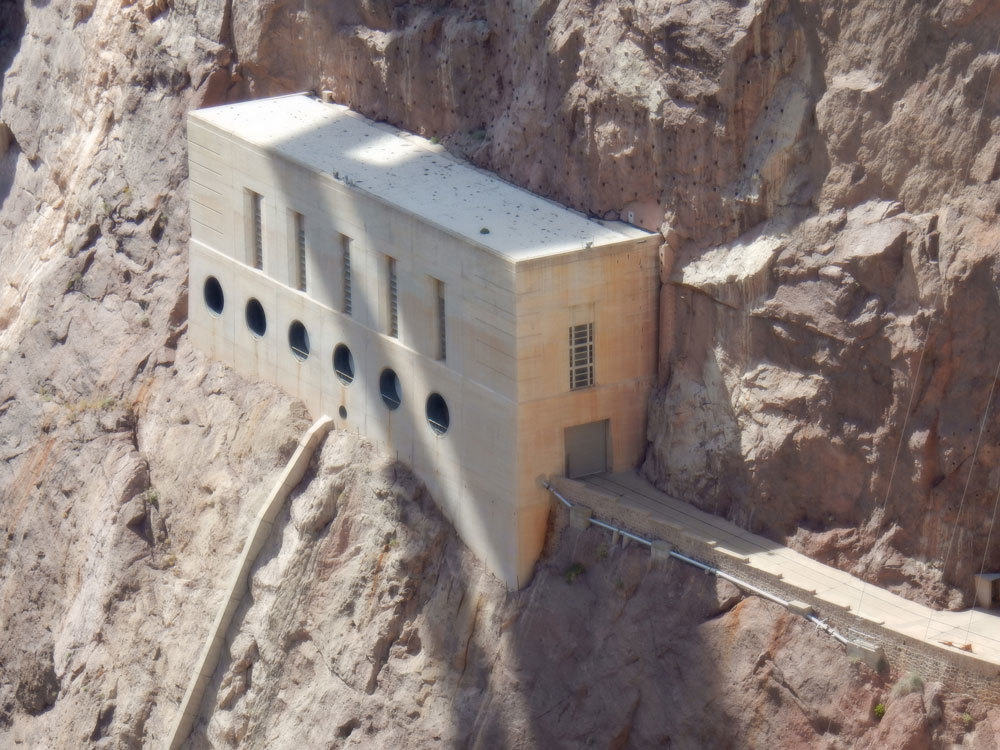 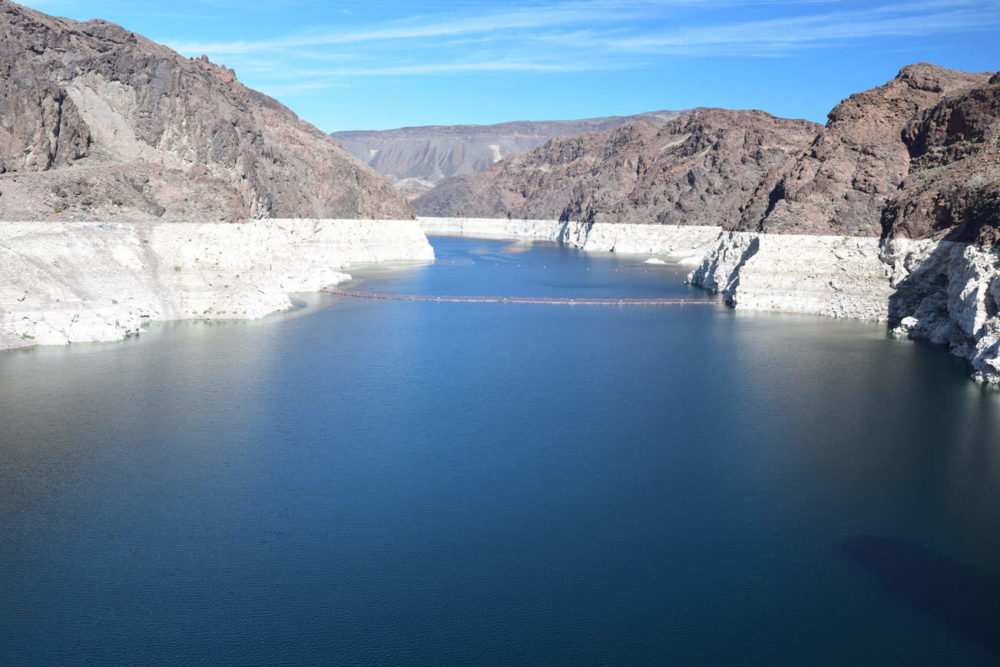 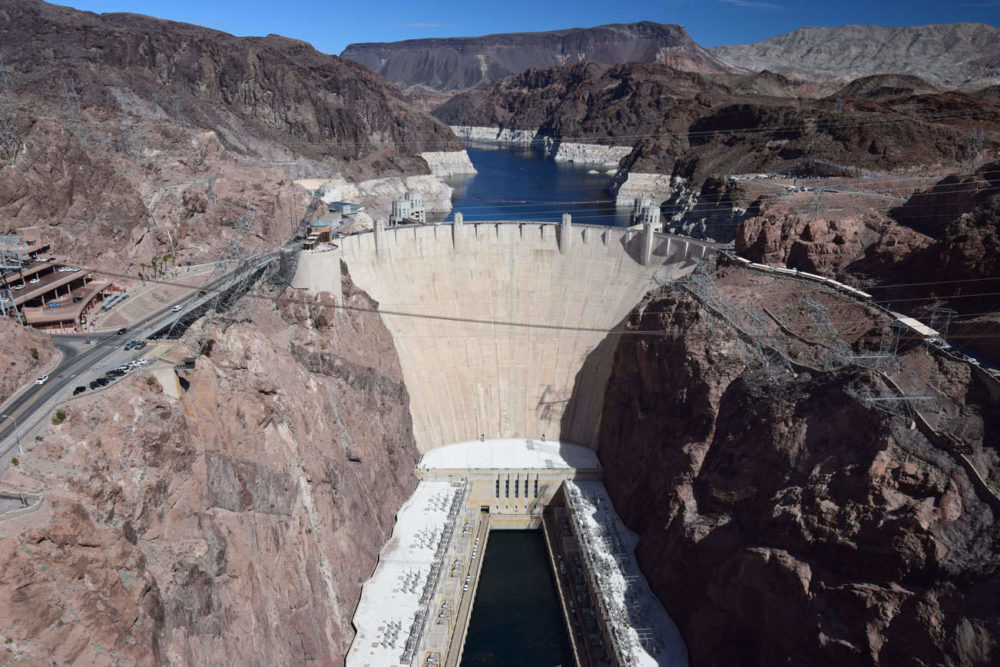 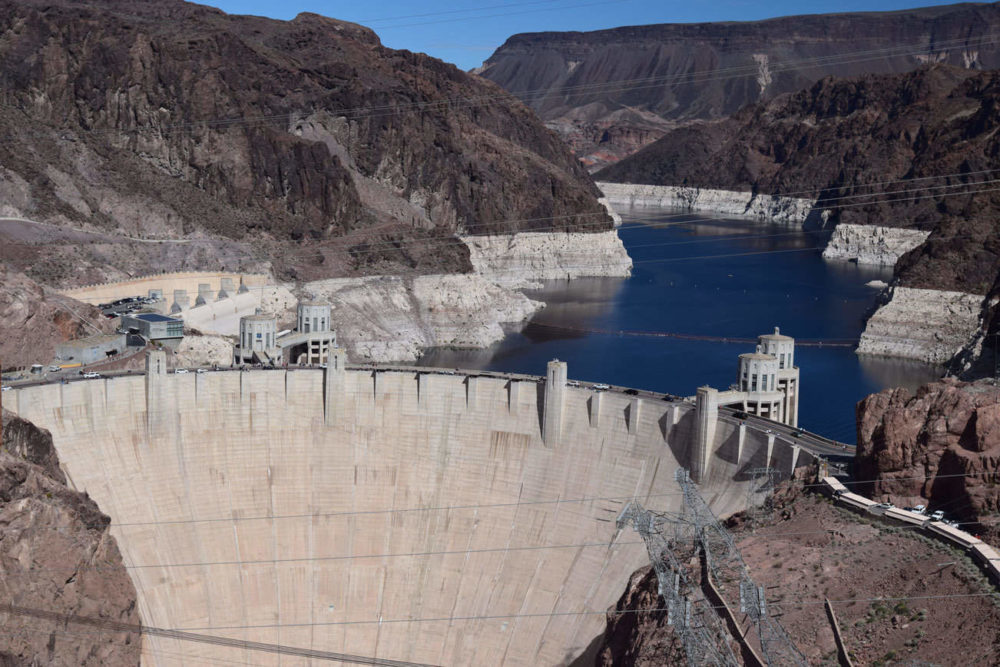 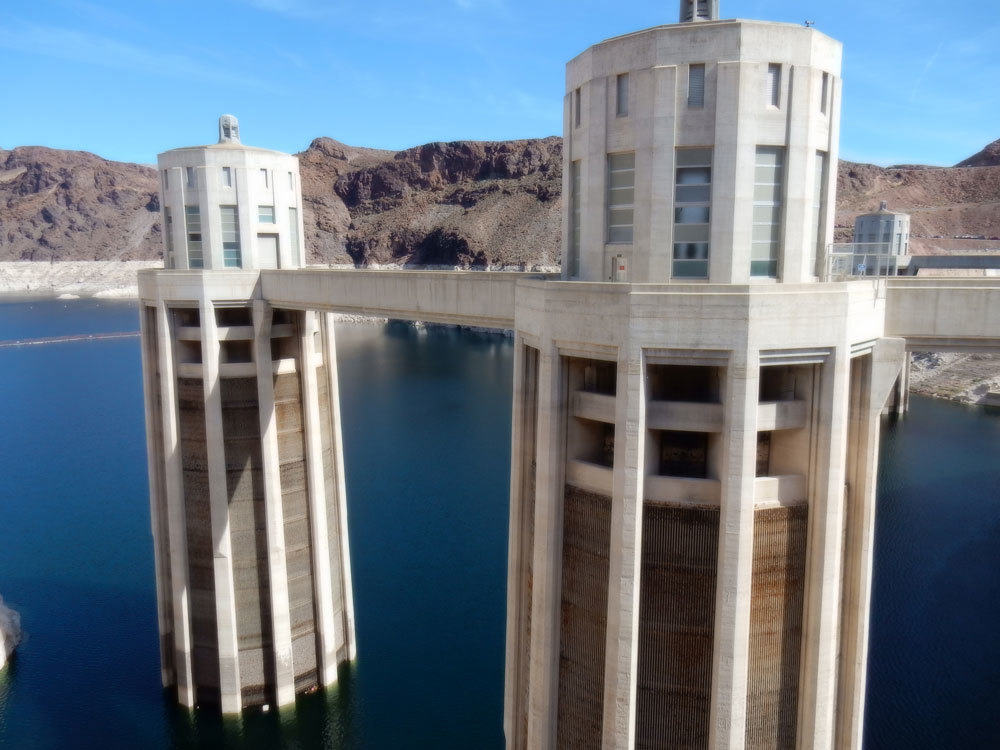 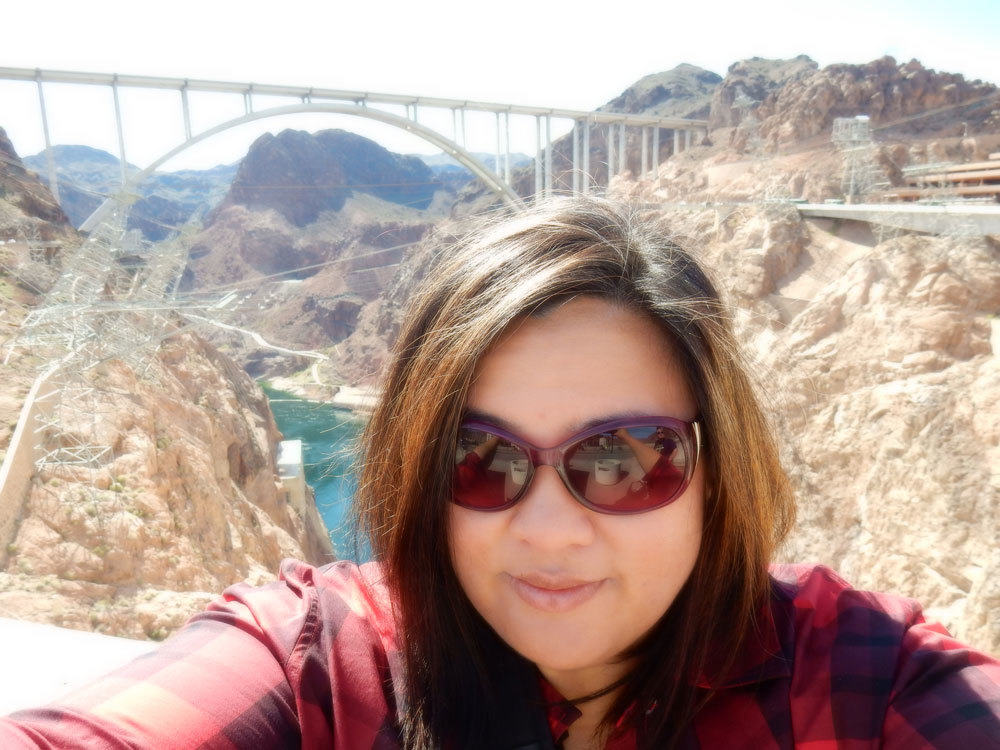 Obligatory Selfie at the Dam 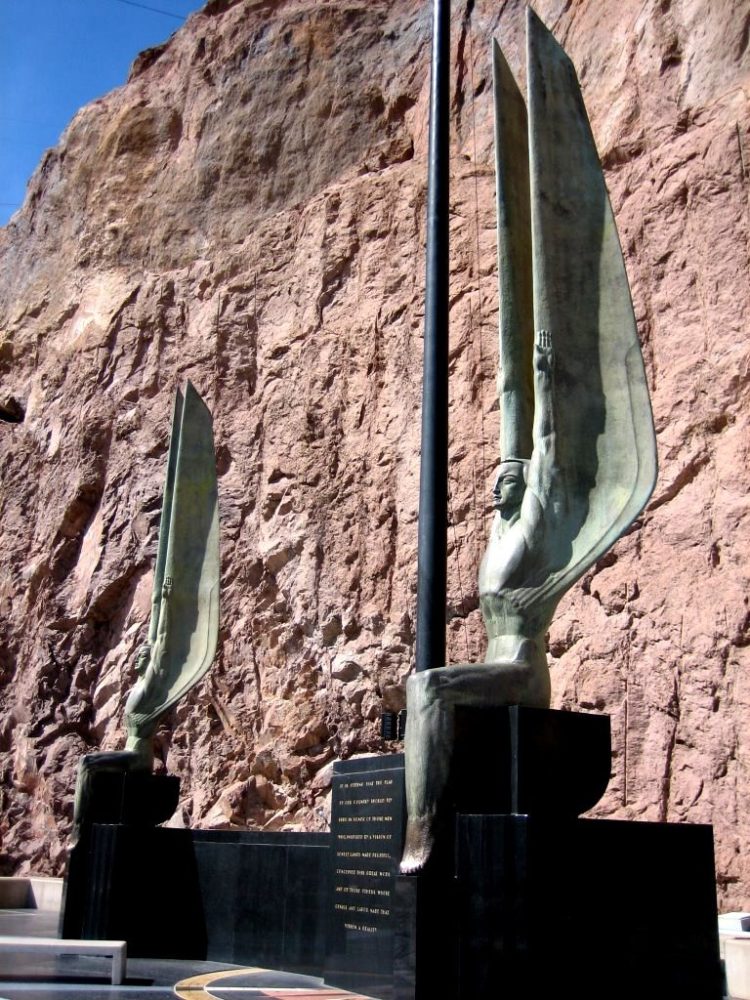 Winged Figures of the Republic 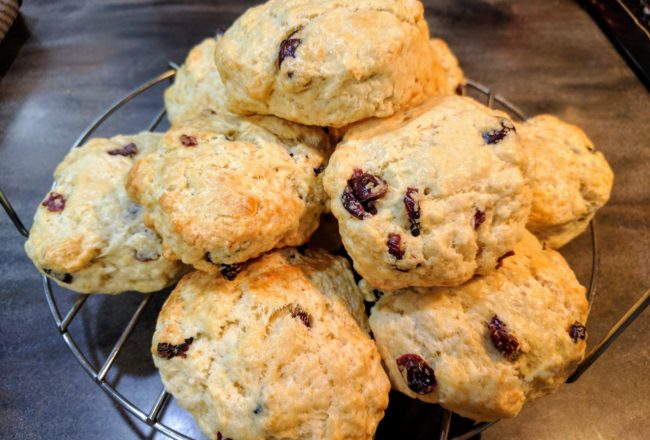 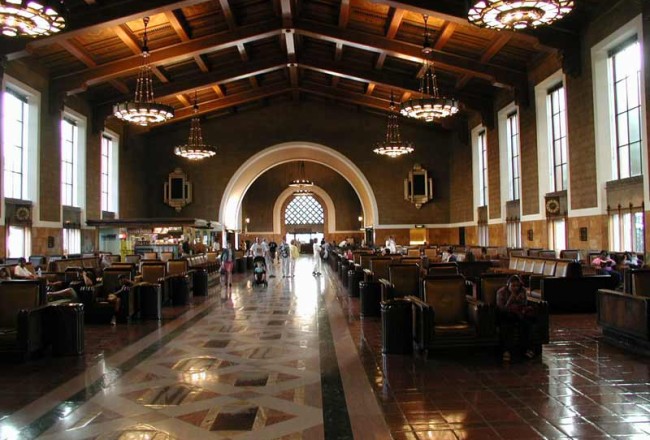