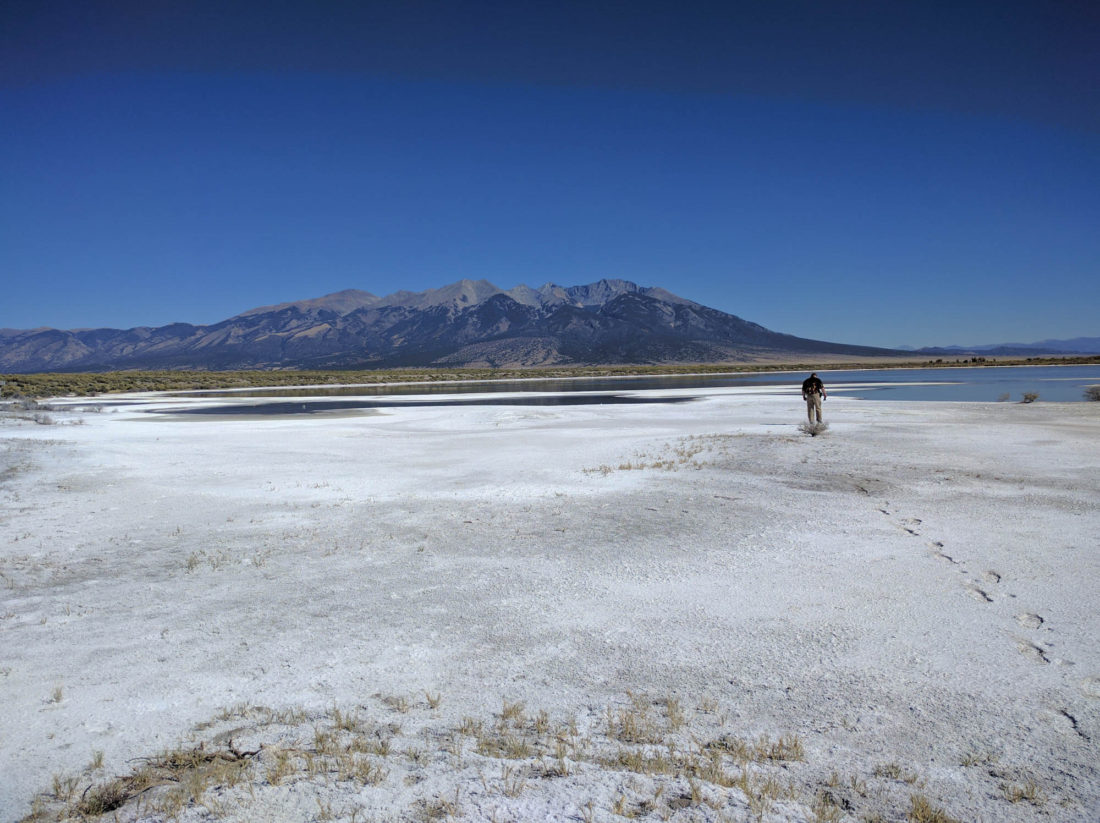 Over the course of a few days in October, we set out to explore the San Luis Valley, an area of Colorado that also includes Great Sand Dunes National Park. Nestled between the Sangre de Cristos mountain range to the east and the San Juan Mountains to the west, lies an area that technically should be a high desert, but hidden beneath the ground, shallow aquifers nourish the land with water converting it into a valley with multiple ecosystems. In one day, you can see a sub-alpine lake, then traverse through an alpine forest complete with a babbling creek, and reach a desert dune by lunch time. By the afternoon, you’ll be walking among reeds in some marshland, and by dinner watching birds in a field take flight into the sunset. San Luis Valley just happens to be like that. 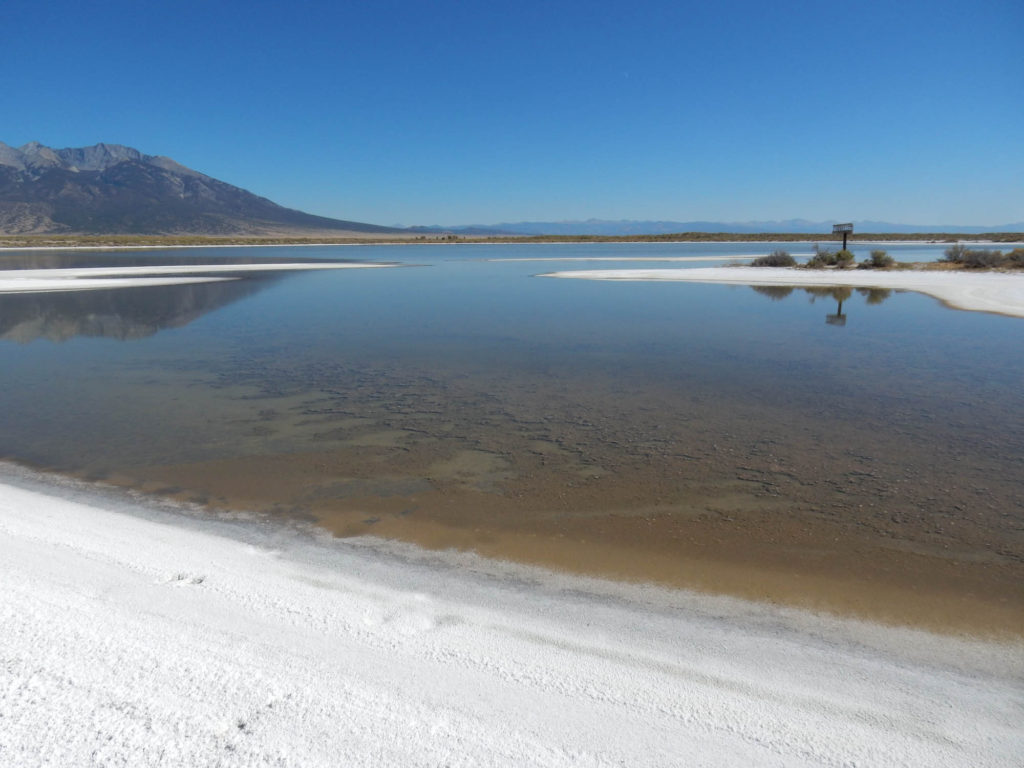 By the late 1800s, European settlers cultivated much of the land, crossing the valley with irrigation canals and wagon roads. Scattered but extensive wetlands dot the valley. With hardly more than 7 inches of rainfall per year, the main water sources are natural springs, meandering rivers fed by winter snows, and artesian wells. Wildlife tends to concentrate around these wetlands and provide a spectacle for bird watchers. My hope is to get some good wildlife viewing in before the birds escape south for the winter.  The Valley houses a number of both state and national wilderness areas, but only three catch my interest: Alamosa National Wildlife Refuge, Monte Vista National Wildlife Refuge, and Blanca Wetlands Recreational Area.

On a windy day, we drove out to Alamosa National Wildlife Refuge, one of three Wildlife Refuges in the San Luis Valley. This nutrient-rich habitat perfect for grazing, roosting, feeding and playing by native and migrating wildlife, including loons, pelicans, herons, egrets, swans, hawks, eagles, falcons, sandpipers, owls, and twice a year in fall and spring, as many as 20,000 sandhill cranes. This is a birder’s paradise, especially during spring. Animals such as deer, elk, coyotes, porcupines, and beaver call this refuge home, but they are shy and sometimes hard to spot. 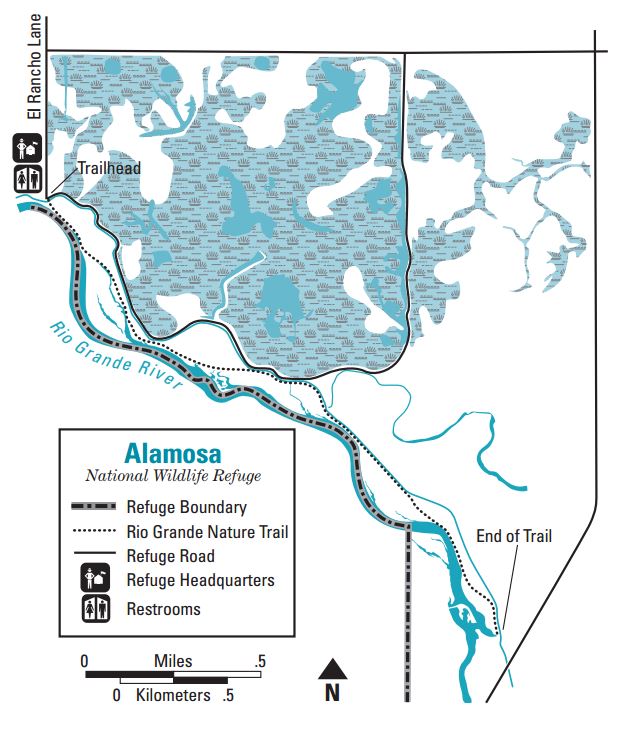 Upon arriving, we take the 2-mile Rio Grande River Trail in search of waterfowl migrate through the Valley. The cold air chills me to my bone and wind billows through lush yellowing grasses ambivalent of my feelings. I spot a variety of habitat types, but I am drawn to the dense stands of willow and towering cottonwood trees as they sway in the wind in search of any avian life. Above us, a Northern Harrier fights gusts of the wind above swaying grass.

After a while, I begin to think that we won’t see any more birds as the air violently swirls about us, but as we head back we spot a lone Black-crowned Night-Heron standing near the river shore, tucked in among the reeds. Then in a small field of grass, we got a brief visit from a Horned Lark. Just before we get to the truck, a handful of Barn Swallows swoop down to hide within a shrub. 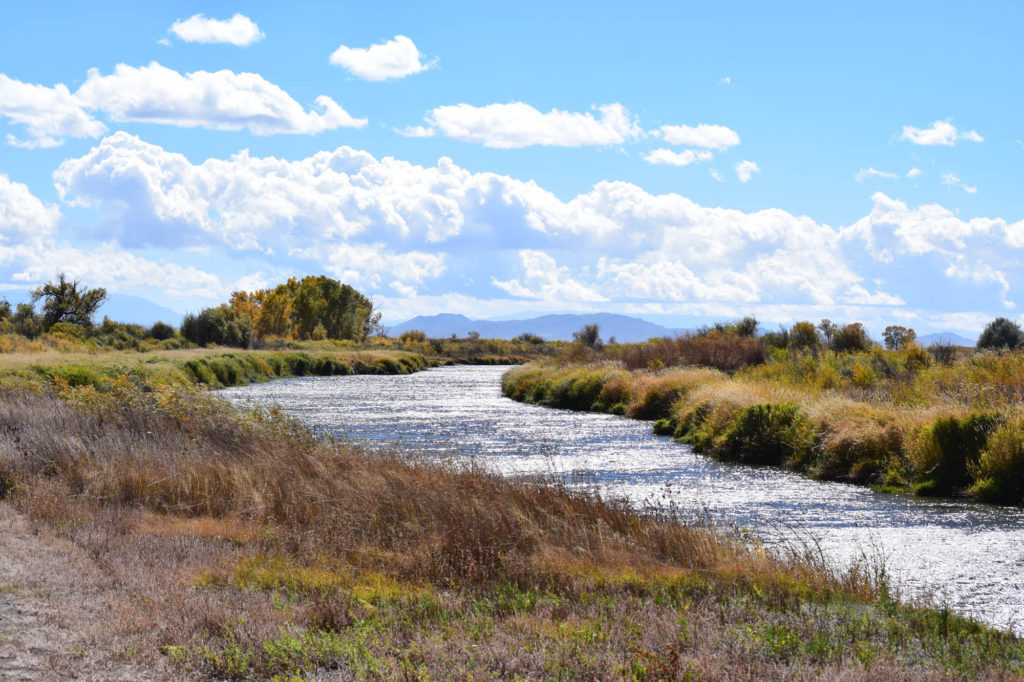 Not to be undaunted, we leave Alamosa and drive to the west side of the valley to Monte Vista National Wildlife Refuge where the Sandhill Cranes like to roost. Small flocks of cranes fly about on their 6-foot wingspans and all of them are making a beautiful racket which sounds like a deep rattling bugle. The ratcheting cacophony is both harsh and mellifluous, and a stunning sight to behold as over two dozen of them take flight and then land again. Intermingled among the cranes, flocks of mundane Canadian geese honk with their familiar calls. 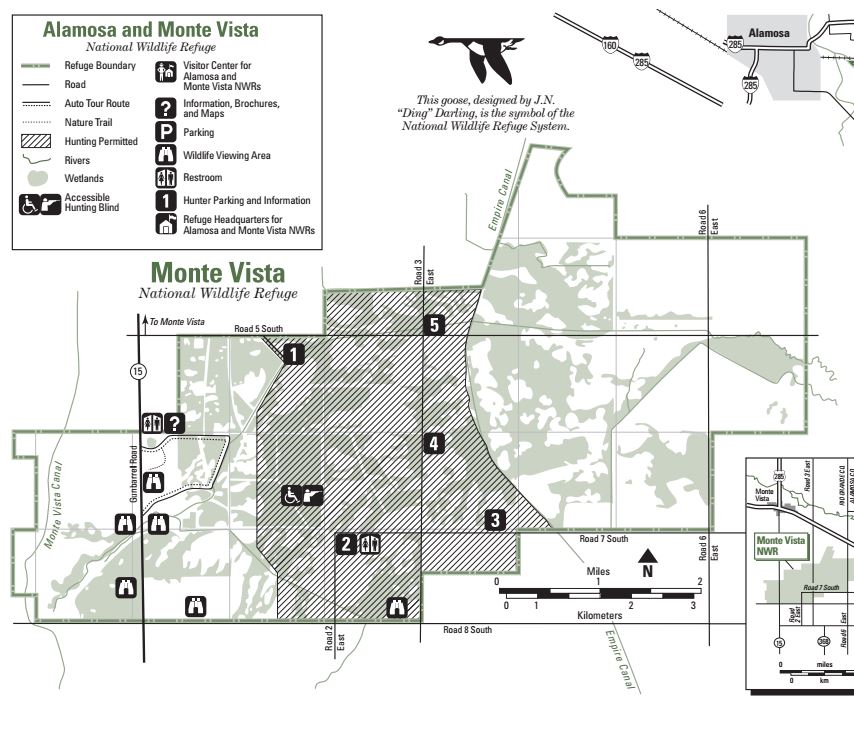 I take a moment to set up my camera and tripod. After taking a few photographs, I step away to view a few cranes to through the high-powered telescope. That’s when the strongest wind yet topples over my camera and tripod, shattering the display panel. I look inside and see that the mirror is cracked, and I am devastated. However, I try not to cry even though I know it won’t be for a while until I can get a new one. 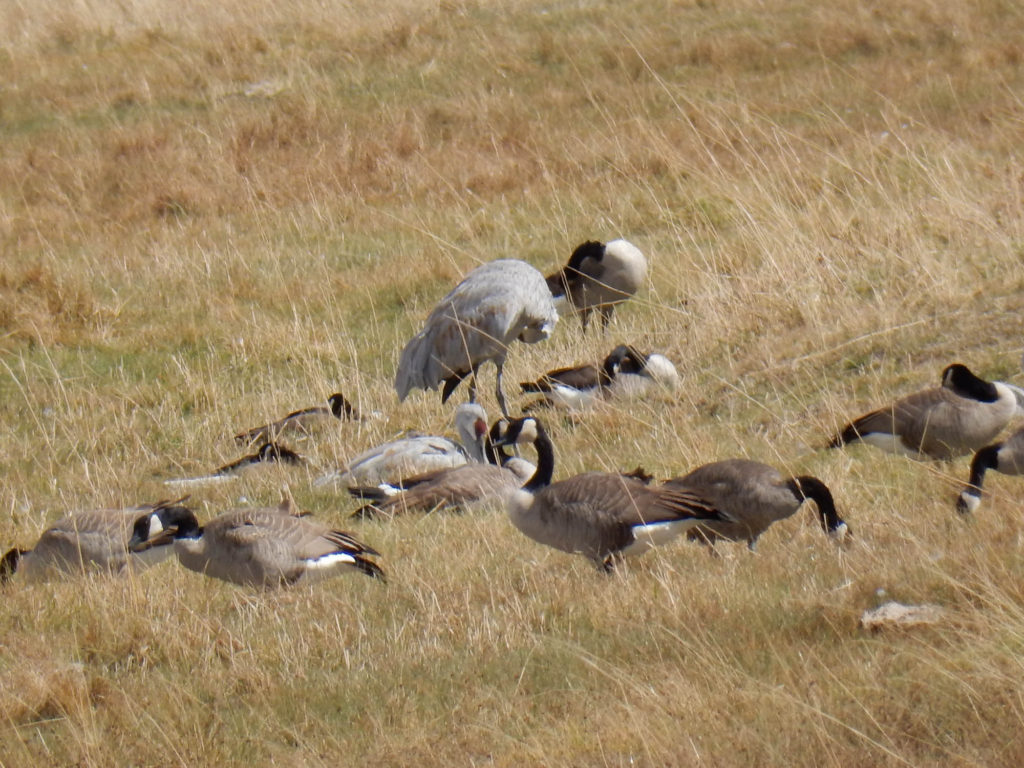 On another less windy October day, we drive to the Blanca Wetlands Recreational Area. According to the online material, Blanca houses over 200 ponds, marshes, and playas, which are excellent habitat for large numbers of waterfowl. The roads into Blanca are rough, deeply rutted, and commonly washboard. We initially notice that a number of the ponds are dry, the bottoms lined with cracked earth.

We first stop at Snipe, where a pond has shrunk significantly leaving a playa made of a white crust earth. There are no birds here, just a white dusty earth is stark and otherworldly. I guess that’s why they call it “Blanca,” which means white in Spanish. We then drive to North Mallard, and find a set of wet ponds filled with a blue clear water. We can see pond fish swim lazily and distant herons take wing. 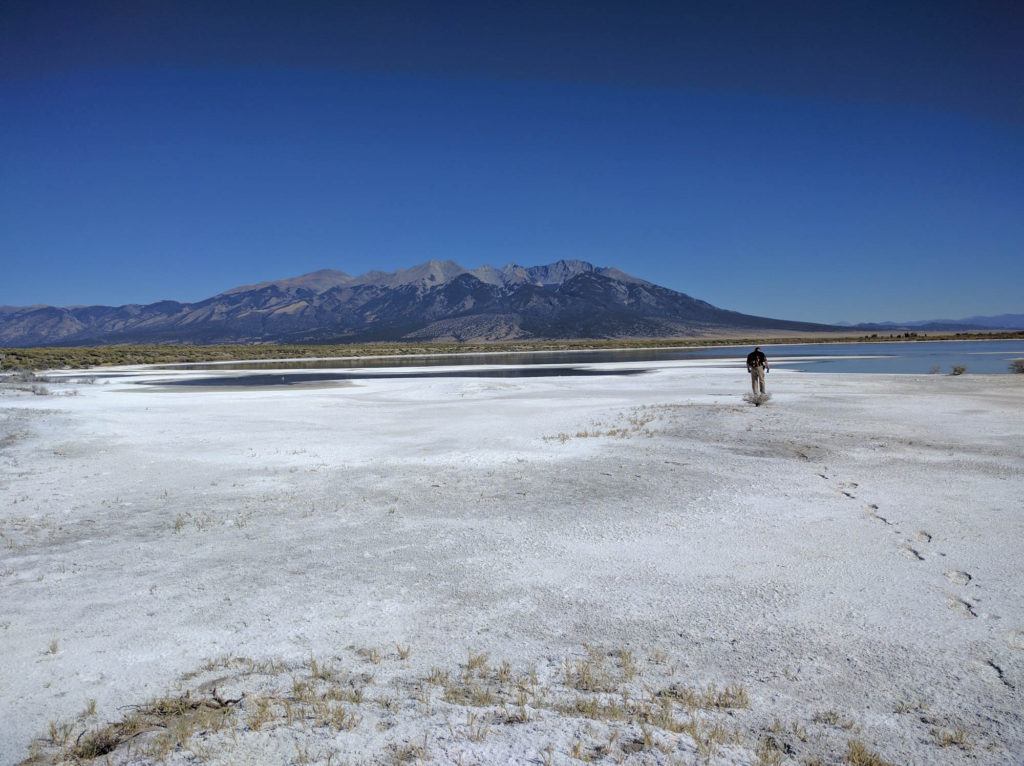 On another day of our San Luis Valley tour, we head to the eastern border of the Rio Grande National Forest, where a ponderosa pine and juniper ecosystem boarders closely with sagebrush plains. These foothills also house spectacular rock cliffs coveted by rock climbers of every level. Courious to see what this land has to offer, we take a scenic route through bucolic farmlands heading west toward the San Juan Mountains.

Upon reaching National Forest Lands, we discover a dirt road deeply washboard, dusty, and rough makes our treck slow. We spot an odd site filled with giant boulders wish look gathered and lumped together by some intentional hand. By the time we reach trailhead we realize that the natural proces of errotion gave these large rocks their regular shape.

Before we head out on to the trail, we read an old and curious kiosk which explains the naming of Elephant Rocks. Many of the boulders here have indents supposedly formed by prehistoric elephants or wooly mammoths rubbing themselves up against the rocks. I’m guessing that kiosk was written in a time before people understood the thermal stress and frost weathering. Here the rocks are a remnant of Fish Canyon tuff, which was large volcanic ash flow deposit resulting from one of the largest known explosive eruptions on Earth over 28 million years ago.

The rough trail takes us through yellow dry grasses and between rows of Elephant rocks on either side. Meanwhile, snakes slither and lizards skitter among the rocks trying to evade us, while Rock Wrens, Green-tailed Towhee, and pinyon jay fly away to the boulder peaks. As we round a corner, a Big Horn Owl greets us with a screech and hoot. After hiking for about 2 miles, we head back but not before unintentionaly spooking a lone male pronghorn into the tall grass.

From Elephant Rocks, we head slightly deeper into the Rio Grande National Forest along another dusty dirt road, this one filled with enough deep ruts to jar my bones.  Towering rock formations formed by that ancient volcanic eruption 28 million years ago, seem to beackon us from a distance.  After a few twists and turns, we find the Natural Arch at the end of a dirt cul-de-sac.  Its obvious that wind, rain, and frost beat upon the volcanic dome for thousands in order for the Natural Arch to form. Tons of rock debris at the bottom collect as evidence to its creation. Amazed by its size we search for a trail and make our way up the steep slope to reach beneath the arch. Slowly but surely, we climb up and when we are done, we are rewarded with a pretty view and a sense of accomplishment. 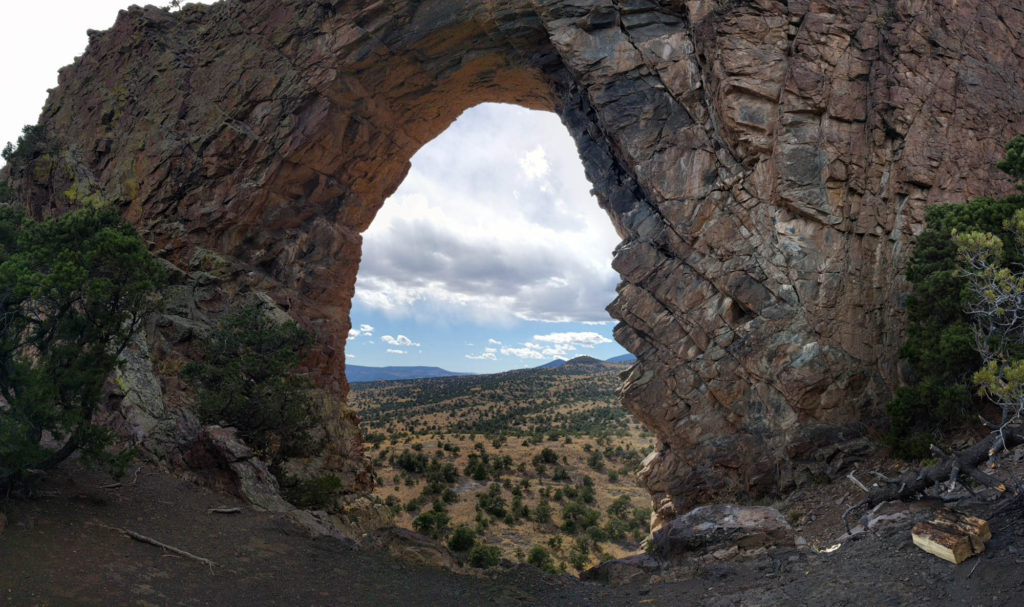 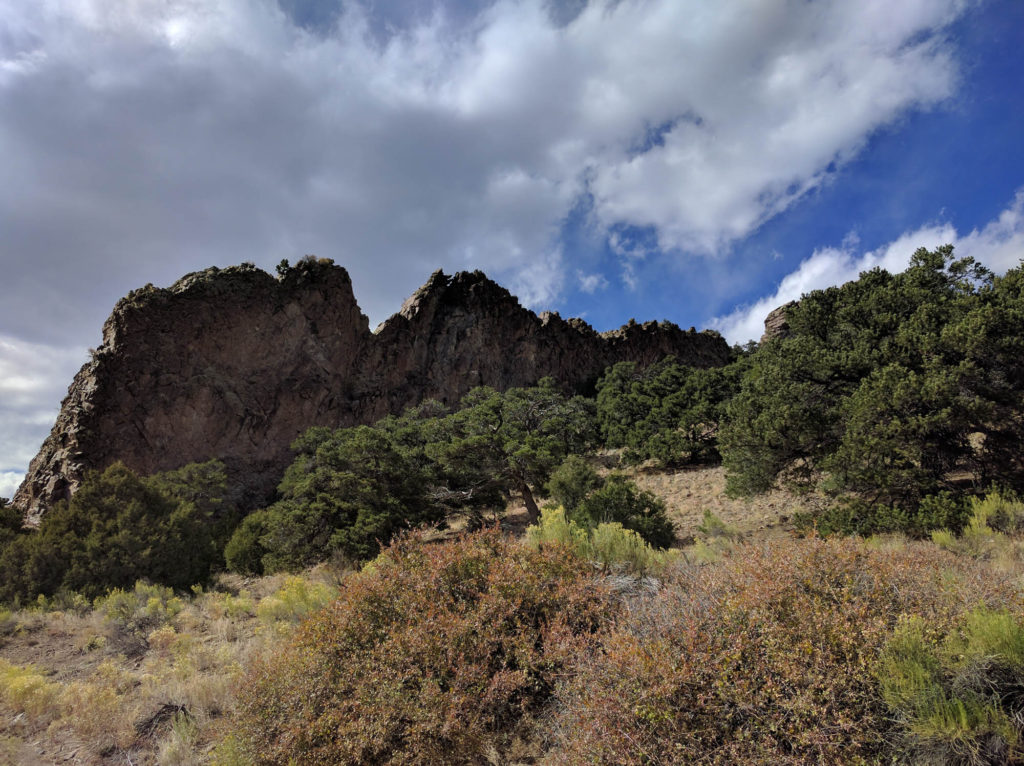 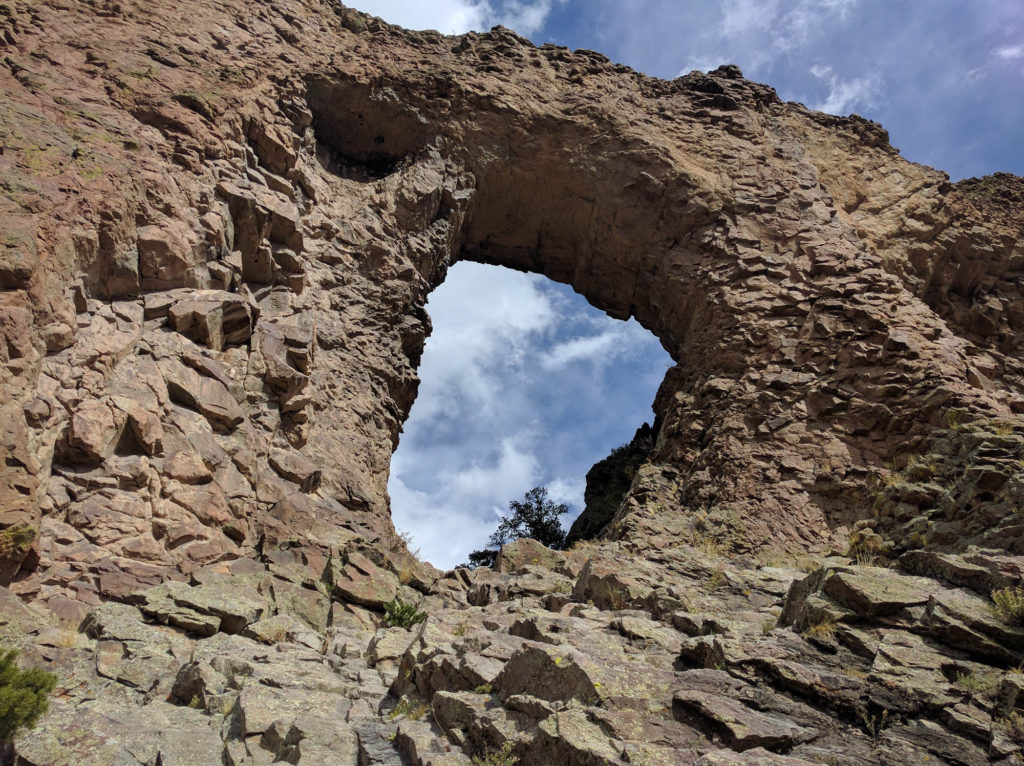 Natural Arch From Halfway Up 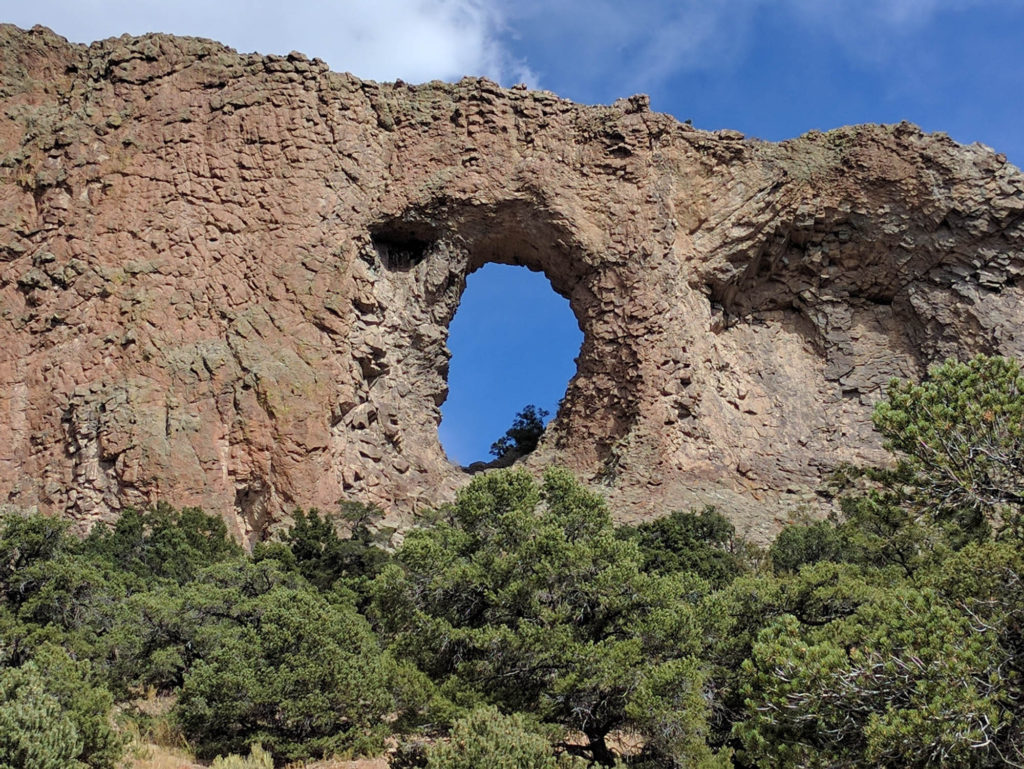 Natural Arch From Below 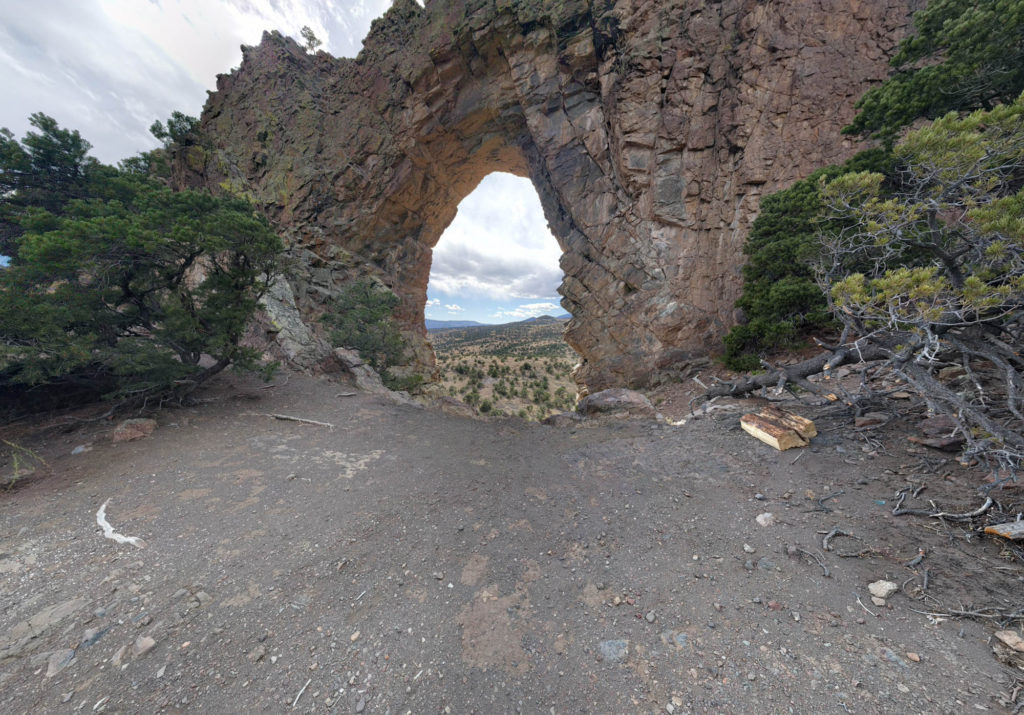 From Behind Natural Arch 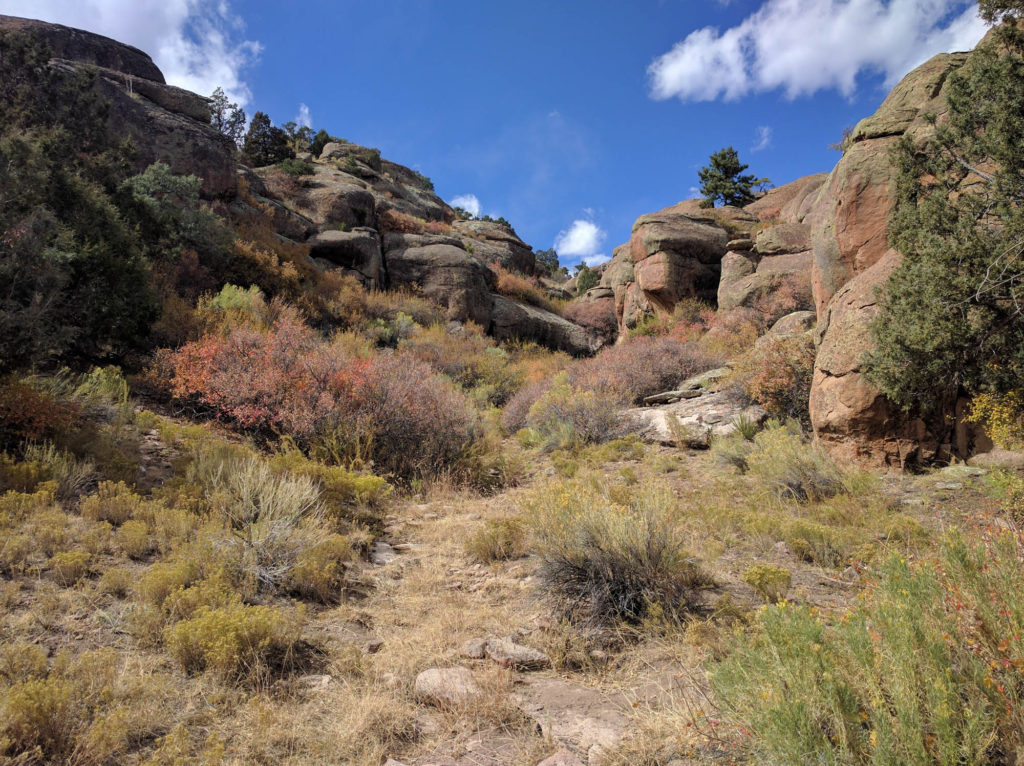 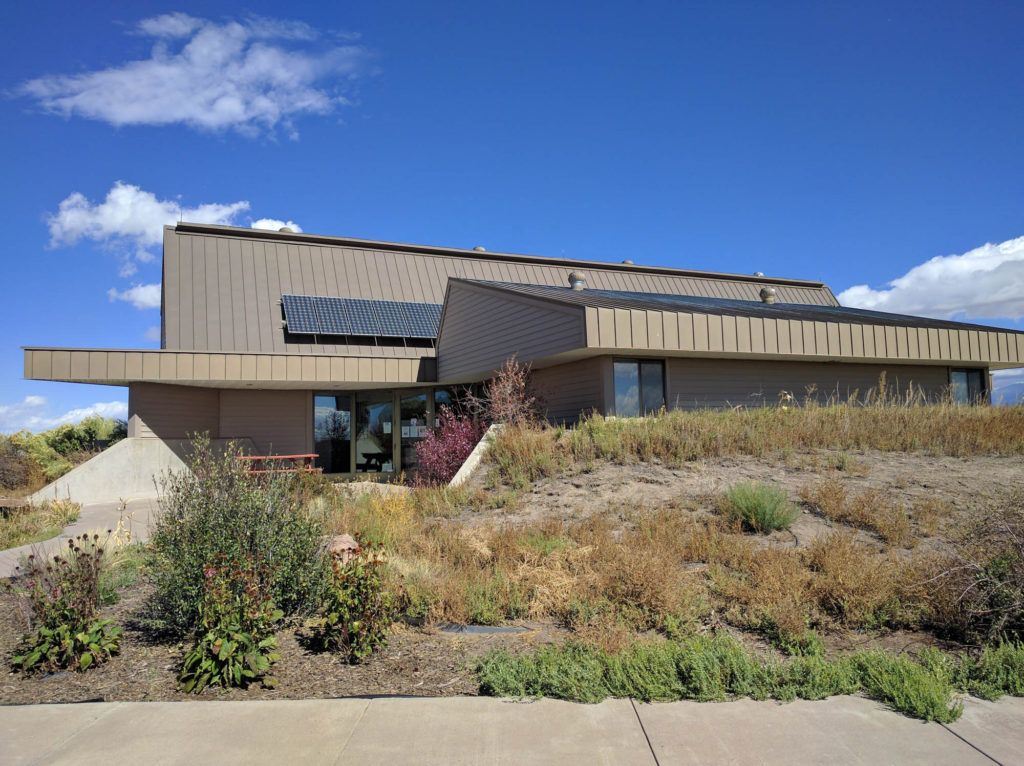 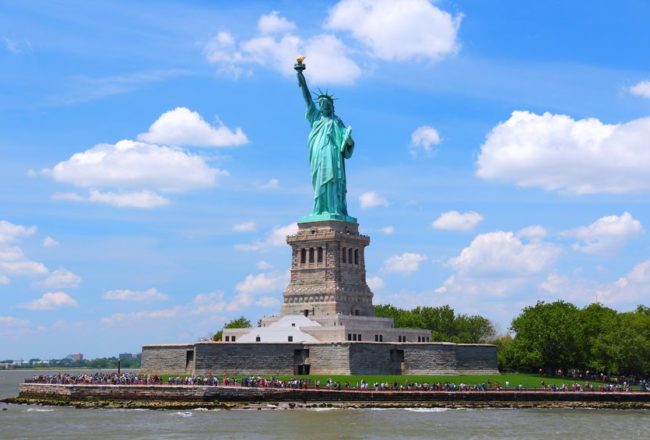 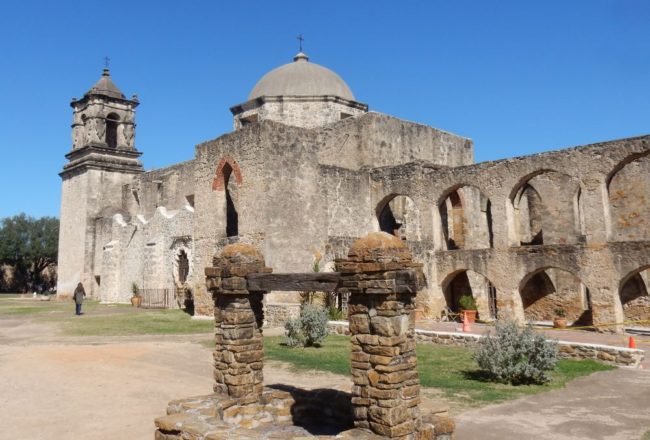