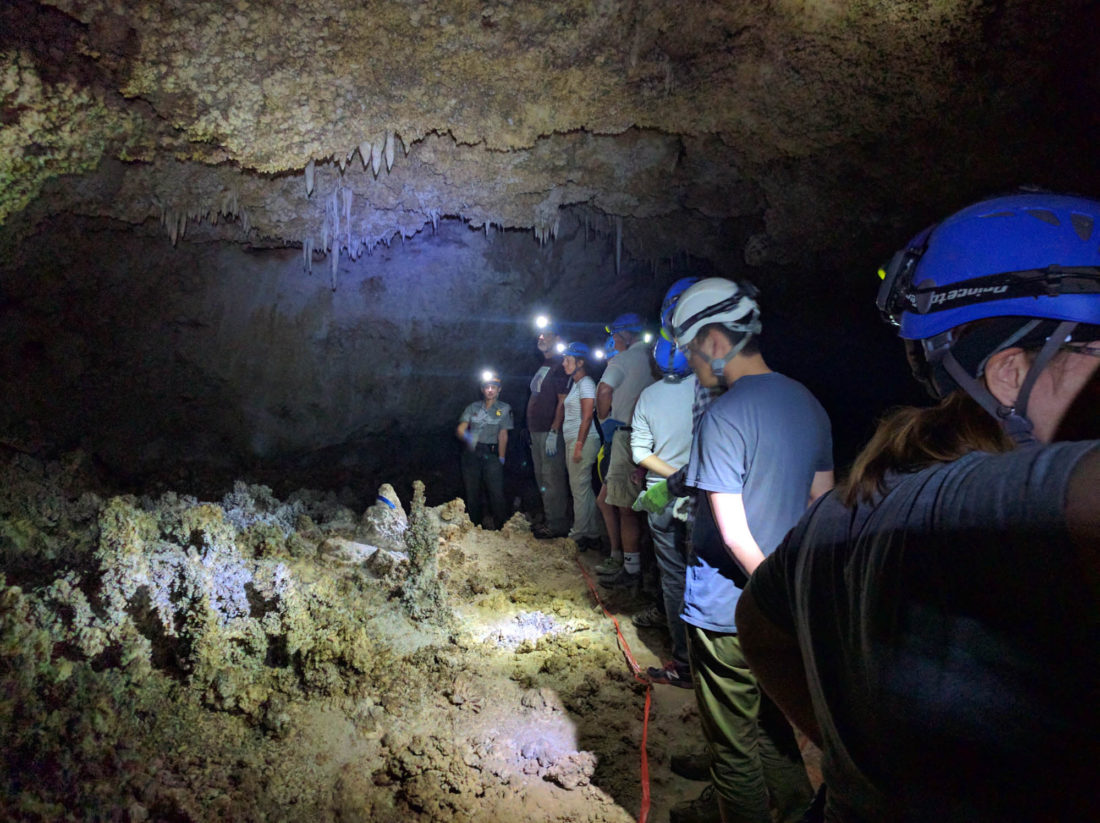 Carlsbad Caverns National Park offers a series of Ranger Guided tours that take you through caves off the beaten path. Some are called “Wild Cave” Tours because you have to get a bit dirty in some areas. In total, there are six ranger guided tours, and I would encourage anyone to take all of them.

In 1924, a National Geographic expedition wrote about the wonders of Lower Cave. When we went, we had a decent sized group of about 10 people. We first gathered at the visitor center for a short introduction on safety and distribution of gear. We then took the elevator down to the Big Room, where the rangers then lead us down a short path to a gate leading to a tunnel entrance to the Lower Cave. 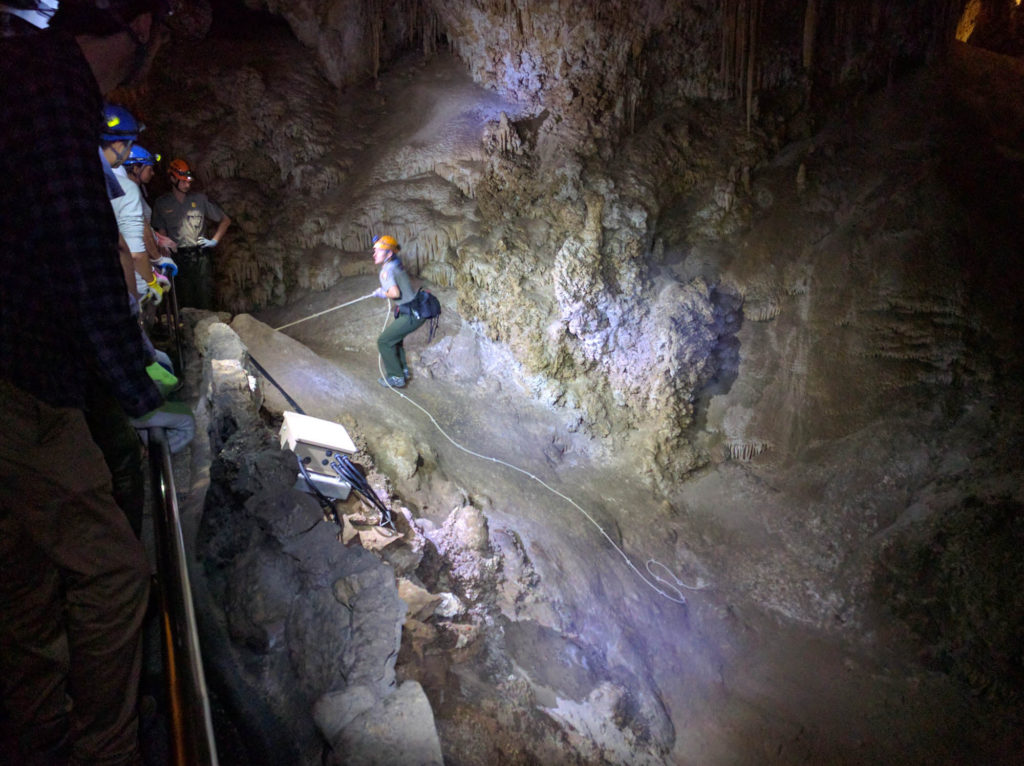 For our first test, we reversed down a 15-foot flowstone path using a knotted rope. This by far is the most tricky part of the trail. The flowstone is slippery and as I was stepping backward down the trail, I had to keep myself straight and perpendicular to the floor. If you shift your body weight either forward or back you will slip. I recall being thankful for the gloves, otherwise my palms would be sweating.

On the next leg of our journey, we climbed down another 50 feet on three sets of steep metal ladders. For safety’s sake, only one person is allowed on a ladder at a time. So you have to call out when you are getting onto and off a ladder. The ladders are fairly slippery going down so we all took it slow. Going down into the darkness without being able to see my next step was a little worrisome, but I got through it. 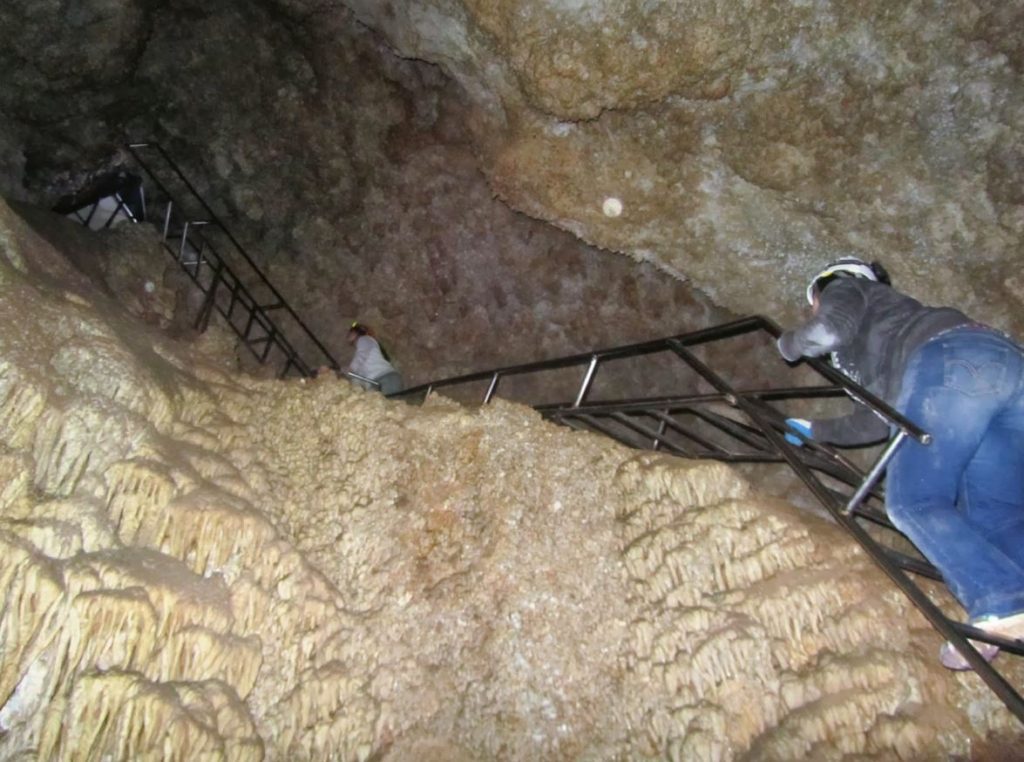 Climbing down the Ladders

Once we cleared the ladders, we continued past clear pools, stopping to spy some horsehair worms and cave crickets. We also passed a neighboring area called the Rookery, where cave pearls form. They are a rare cave formation, but here they are everywhere. A cave pearl is a small, usually spherical, speleothem formed by a concretion of calcium salts that form concentric layers around a nucleus. As water moves the cave pearl, it becomes polished and glossy. If exposed to the air, cave pearls can degrade and appear rough. Each collection of pearls looked like a small clutch of eggs cradled in a nest of cream. 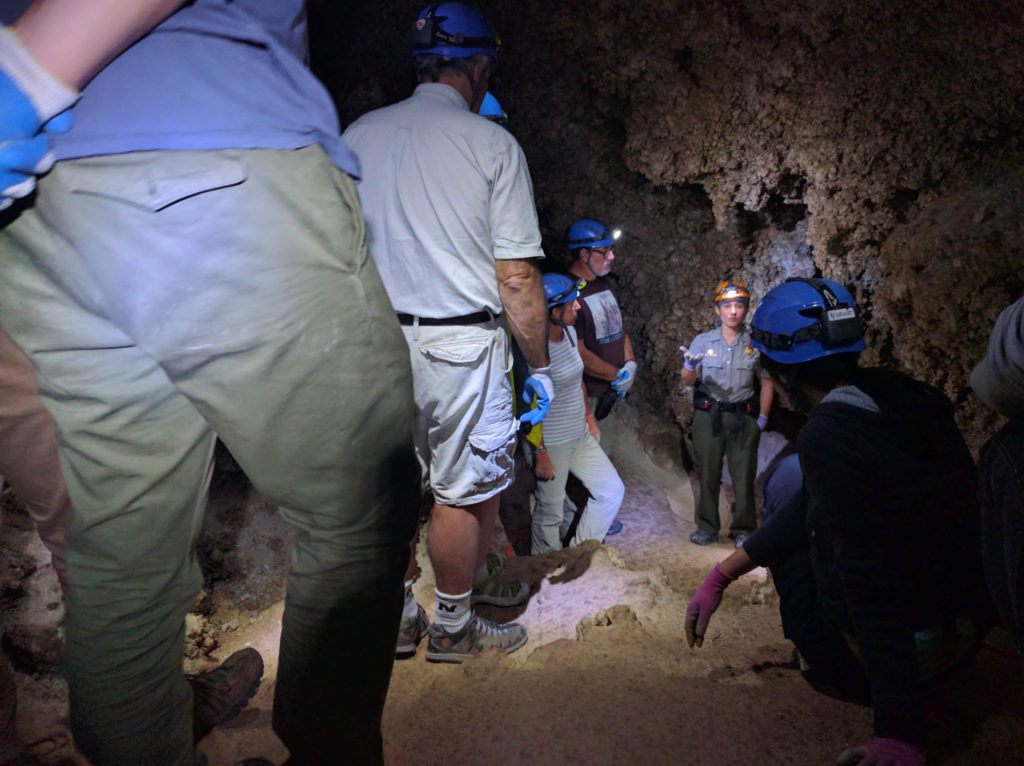 From here on out, our trail was marked by a candy-striped tape on either side. Back at the visitor center, we were told not to go beyond the tape as to protect the cave and its formations. Slowly we made our way through a side passage and saw wondrous column formations, flowstones, and other cave formations not commonly found in the Big Room. We also got to walk through a tunnel with a low ceiling filled with soda straws and draperies. It was on this tour that I actually found helictites and aragonite crystals, two cave formations somewhat hard to find in abundance. 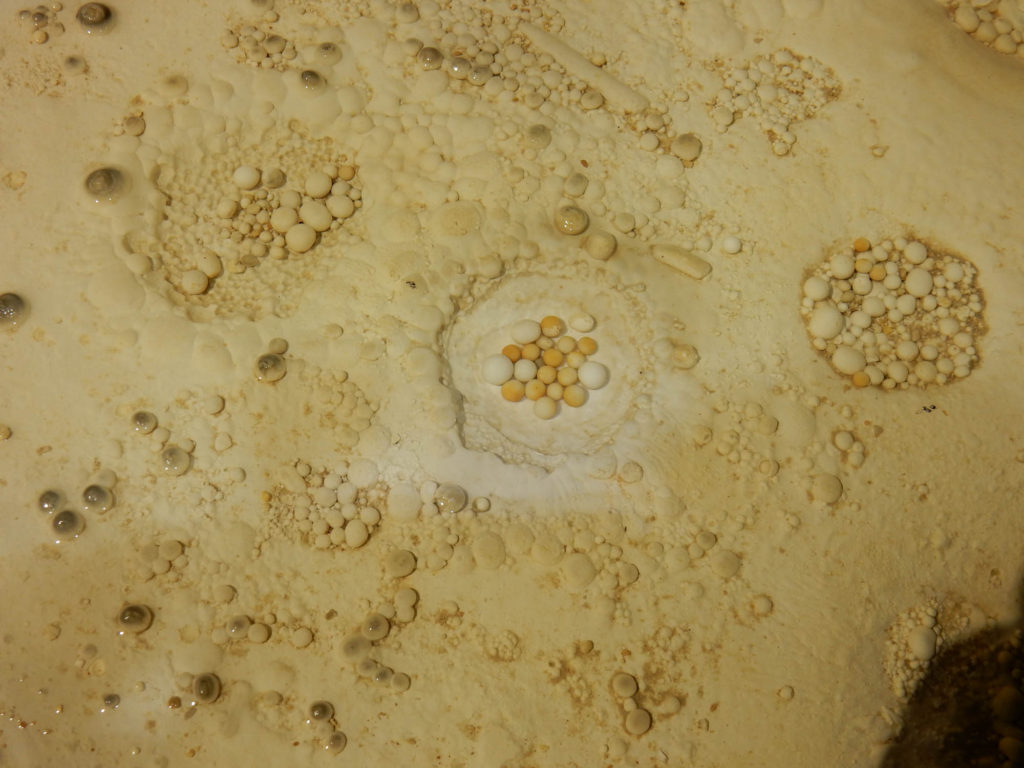 Cave Pearls found in the Rookery

Bottom of the Jumping Off Place

We then made it to the bottom of the Jumping Off Place. From below I could see the faint shifting of shadows as people walked on the Big Room Trail. Now that I was finally on the bottom floor, I could get a good look at the fallen rubble. Before us stood a gigantic rock covered in cave formations usually found on the ceiling. Our guide said that a cave shaking event occurred a million or so years ago, such that it caused this land bridge to come crashing down. Usually, earthquakes don’t reach this far down into the earth, so it had to be something else. The best guess they had was that it had to do with when The Iceberg (a huge stone in the Natural Entrance Trail) fell from its place along the cave wall. 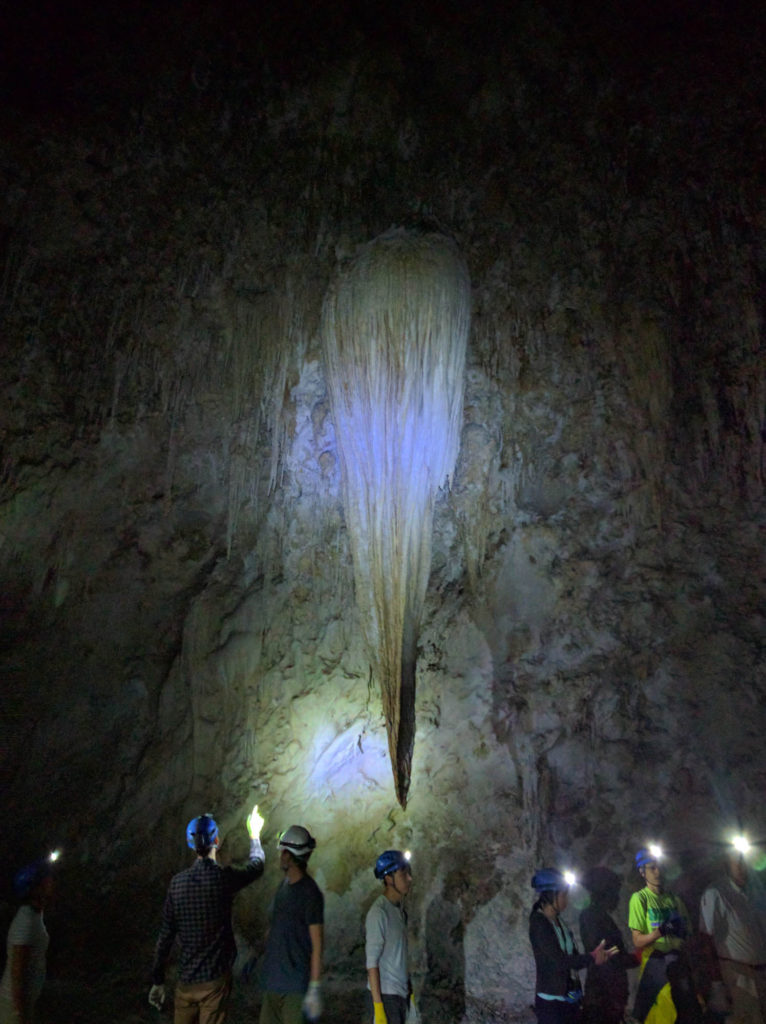 On the Other Side

From the lower half of the Jumping Off Place, we then took another side tunnel to where the original 1924 explorers first found the passage to Lower Cave. This was the same tunnel that we passed when we were back in the Big Room, except now we were looking up from the underside. Within this small cave, we were able to view the remains of calcite rafts, which are the thin accumulations of calcite that appear on the surface of cave pools. There was also evidence of Rimstone dams; fragile vertical walls that build up as cave pools overflow, depositing calcite at the edges. At the point of overflow, calcite is precipitated as the CO2 loss occurs. And finally, we found Lily Pads, a kind of shelf stone which form around the edges of cave pools. They usually develop under still water conditions and a constant pool level. I was amazed that, although the water was long gone, the rare formations still remained here after all these years. 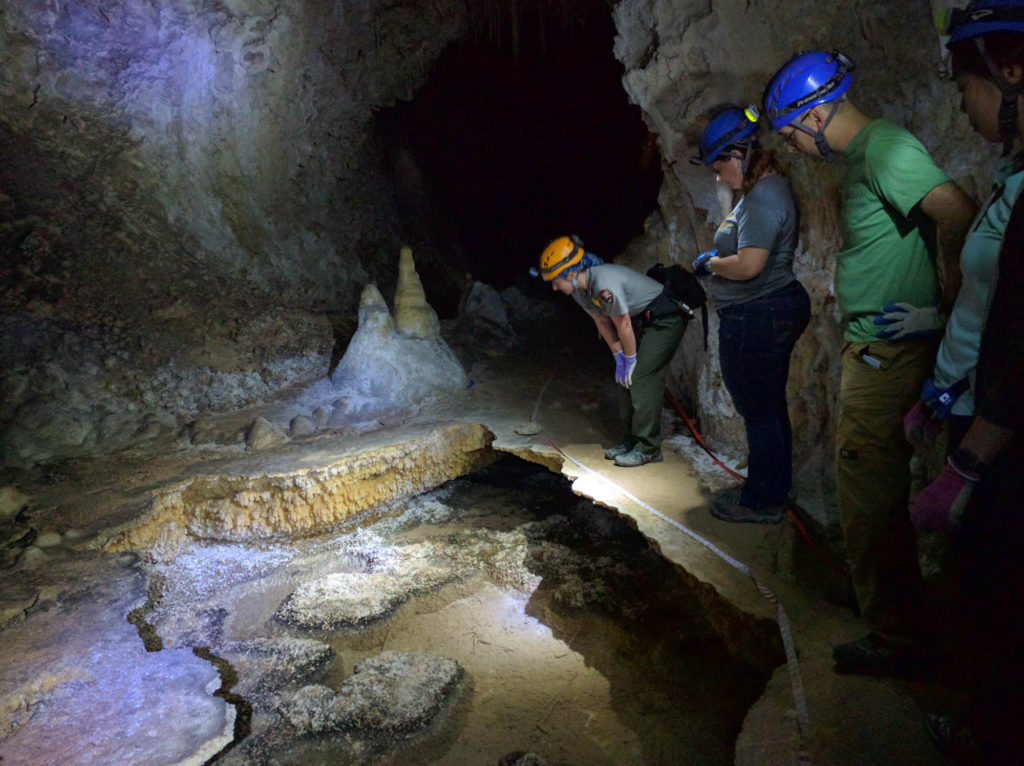 As we move out of the area below the Jumping Off Place, we took a turn into another part of Lower Cave that you would never know was there unless you were on the tour. To protect the caves, they took out the artificial lights, so much of the cave was pitch black until our headlamps lit the area. As we were guided through a pretty sizable cavern, we were introduced to Colonel Boles Formation. Two columns side by side made of cream colored calcium. The rangers pointed out that a crack in both columns where some kind of earth shifting had damaged the columns. Upon closer inspection, we were able to see the skeletal remains of a poor bat embedded near the base of the formation, encased in layers of calcite. 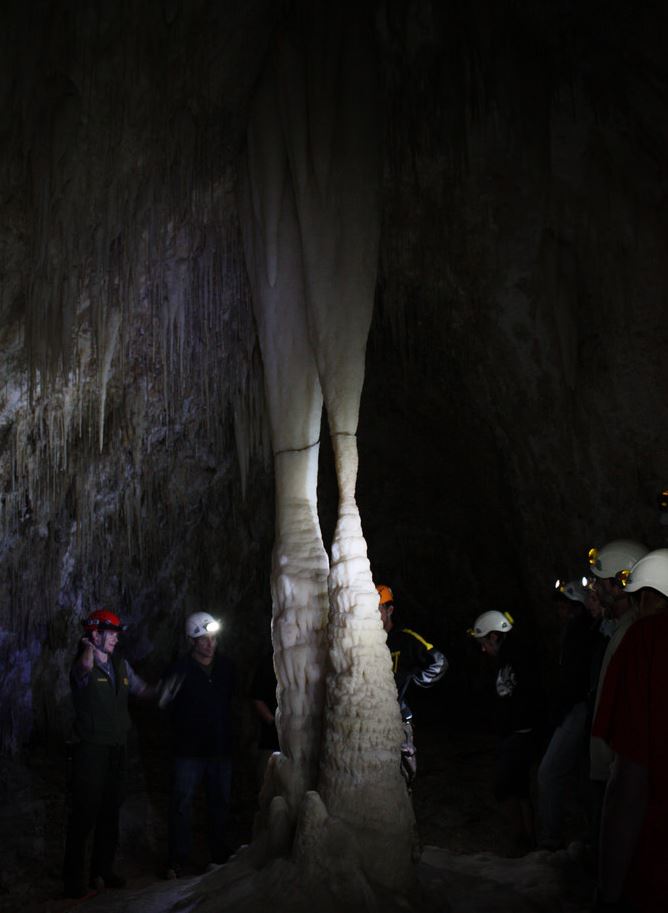 It was at this point where the rangers decide to do an experiment which required us to black out our headlamps and close our eyes. Some forms of calcite have photoluminescence properties. As we sat in the dark with our eyes shut tightly, our guides shined powerful bright lights into the stone of a stalagmite. After a quick countdown, we opened our eyes just a fraction after they shut the light off. For a few seconds, the calcite stone glowed greenishly-yellow before fading. A fun little performance in the dead darkness of a cave. Now I can’t help but wonder if bringing a small UV light would reveal any fluorescence properties in the cave minerals.

Nearing the end of our tour, our guides took us to the entrance of a small passageway, where we could experience a controlled solo exploration of a cave. Each of us would enter the tight tunnel one at a time. Once the person before reached the gathering point they would turn off their headlamps. When the next person could no longer see light in the cave, they would proceed down the tight tunnel. By far this was my favorite encounter in the lower cave tour. As I made my way through the cave, having a single sole light sent my perspective of distance for a loop. Without the reference light of another caver before me, I had a hard time telling what was before me and how far I was going. If my headlamp were to fail at that moment, would I be able to find my way back out of this tunnel to where I started? The experience told me how much I depended on sight and the familiar shapes of the surface world. 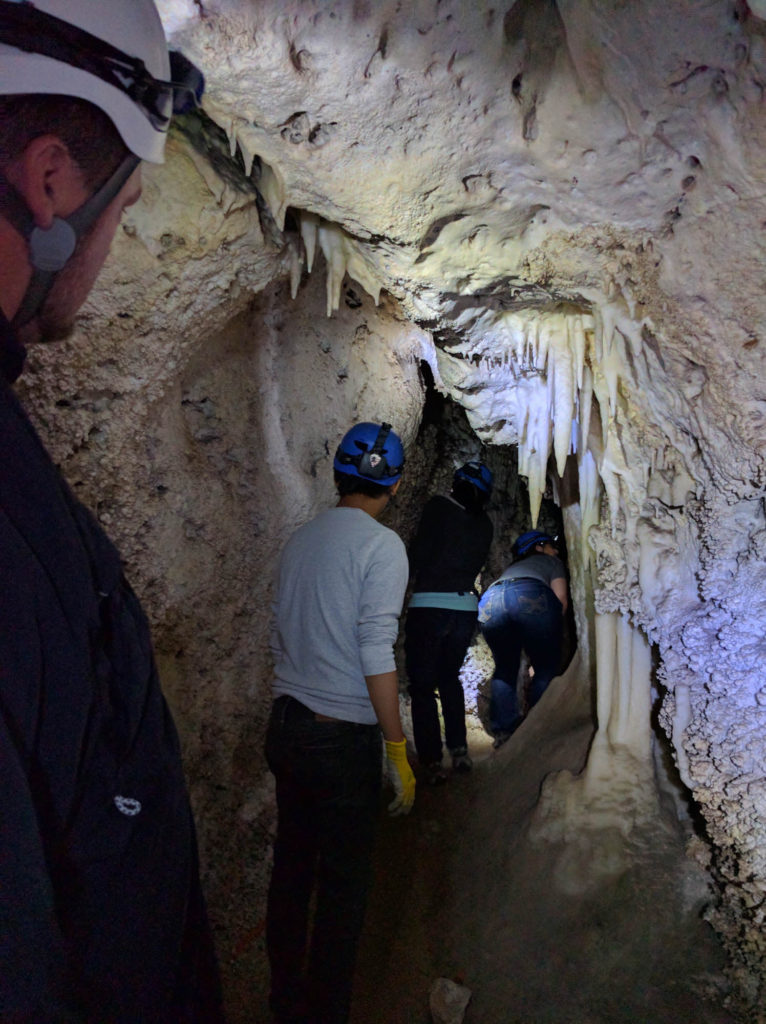 For our final leg of the cave tour, we were given an option to crawl out or walk out. Having promised never to pass up a new opportunity, both Hitch and I crawled out. This crawling tunnel didn’t allow for much other than crawling and wiggling, but even at our size, we were able to shimmy, shift, and squeeze our way through to the other side.

Upon our exit, we found ourselves near the Rookery and the cave pools. We backtracked through to the ladders and slowly worked our way up to the Big Room where we started. Our final test was to climb up the slippery flowstone slope using that knotted rope. Just moments after the rope climb, all I could think of was, “I’m so glad I didn’t slip and fall face forward. Yay me!” 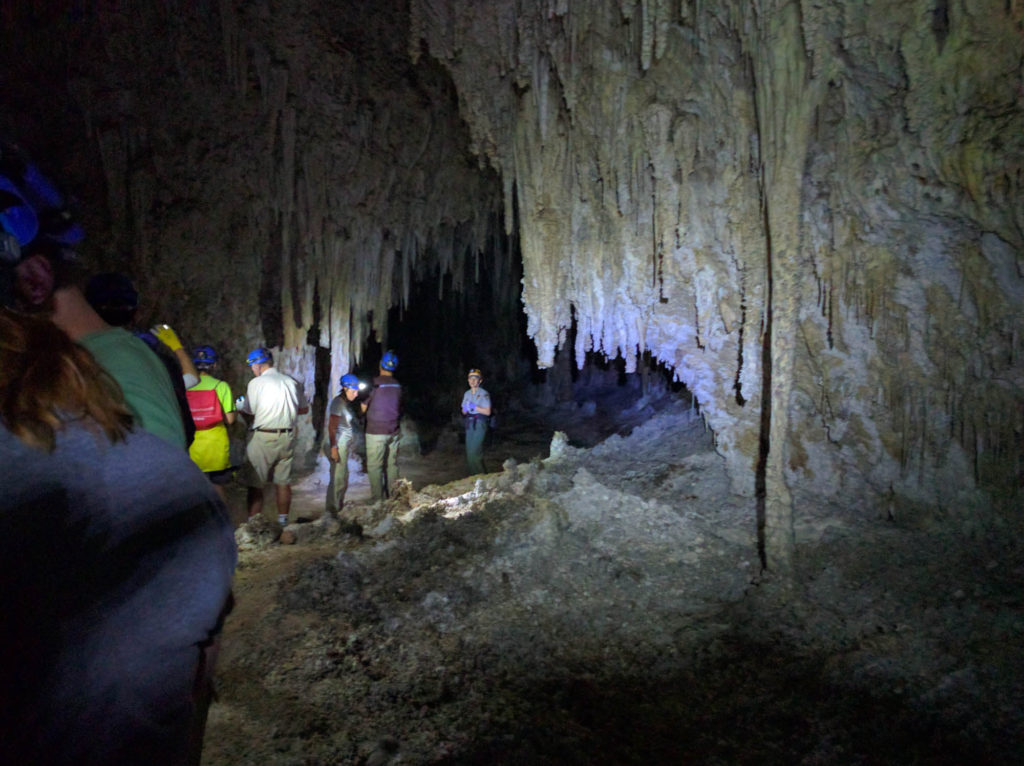 Heading Toward The Pools

How to See Lower Cave for Yourself

Although I loved the Lower Cave tour itself, I was kind of frustrated at the lack of information about the tour. Apparently the only offer the tour on certain days and times, which aren’t readily available online. There are also blackout days because of maintenance. You can book online at Recreation.gov, which gives you some information, but if you happen to pick a day where they’re not having one, it will just show up blank. I would suggest calling and ask what days of the week the tour occurs on for that season, and then go back to Recreation.gov and make your reservation.

Many of the cave tours have restrictions and requirements. Much of the information can be found when you book online, but there was additional information that we didn’t discover until we spoke with an actual ranger. 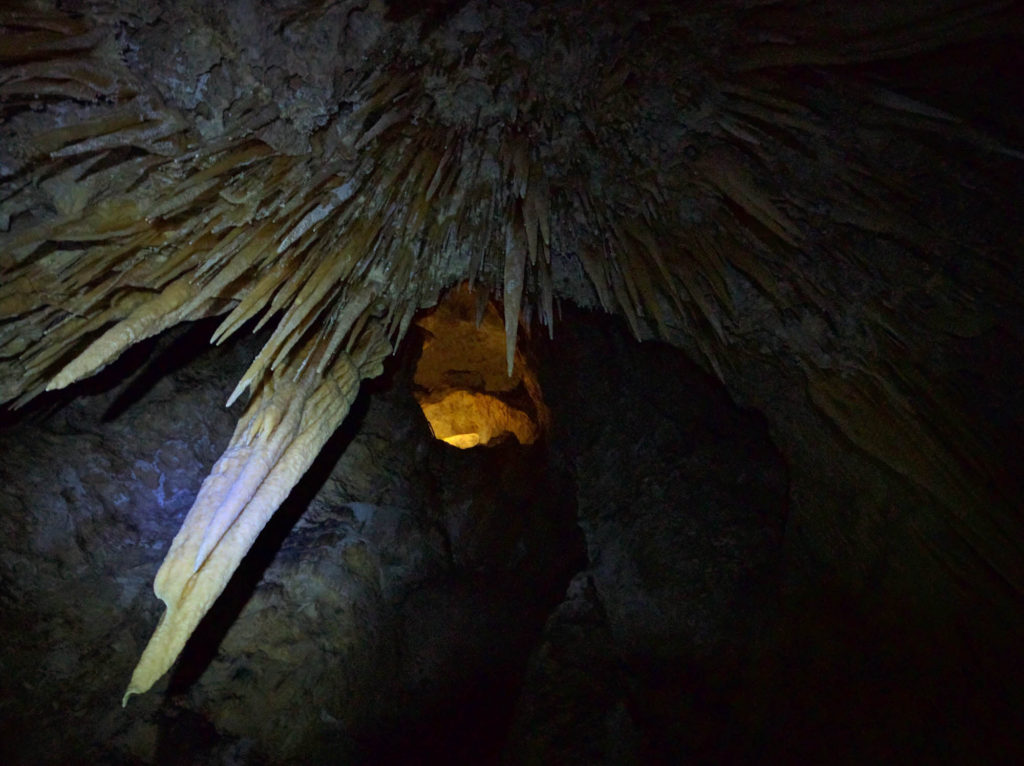 Looking up at the passage the 1924 crew crawled through 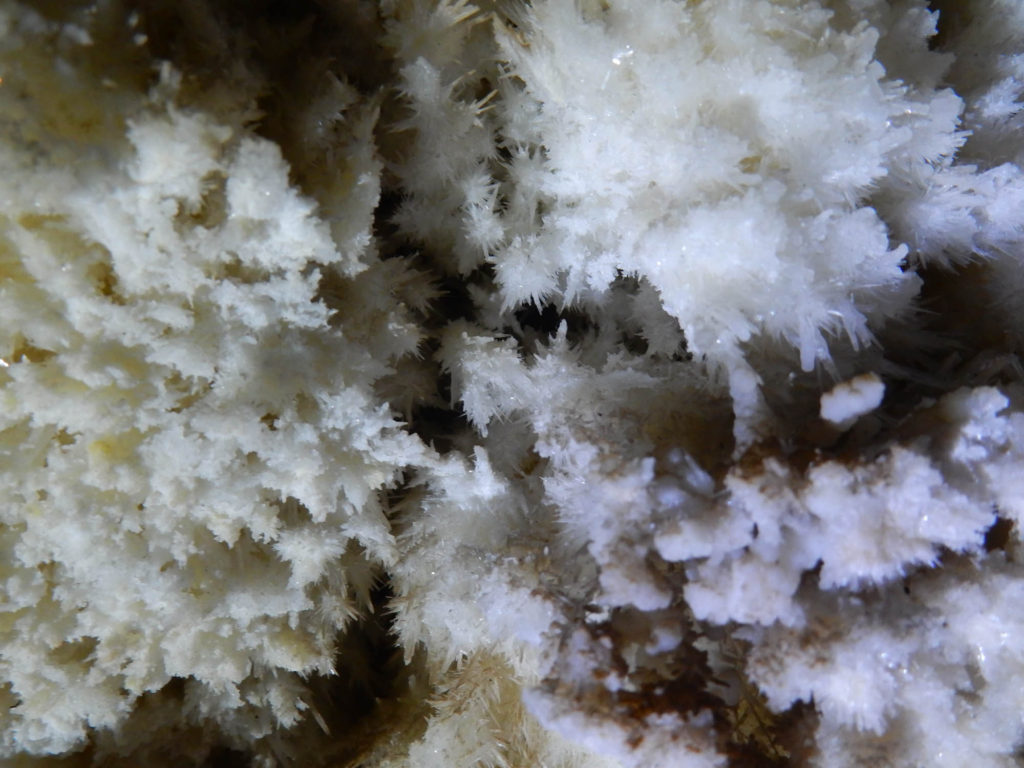 Aragonite is a carbonate mineral, one of the two most common, naturally occurring, crystal forms of calcium carbonate. 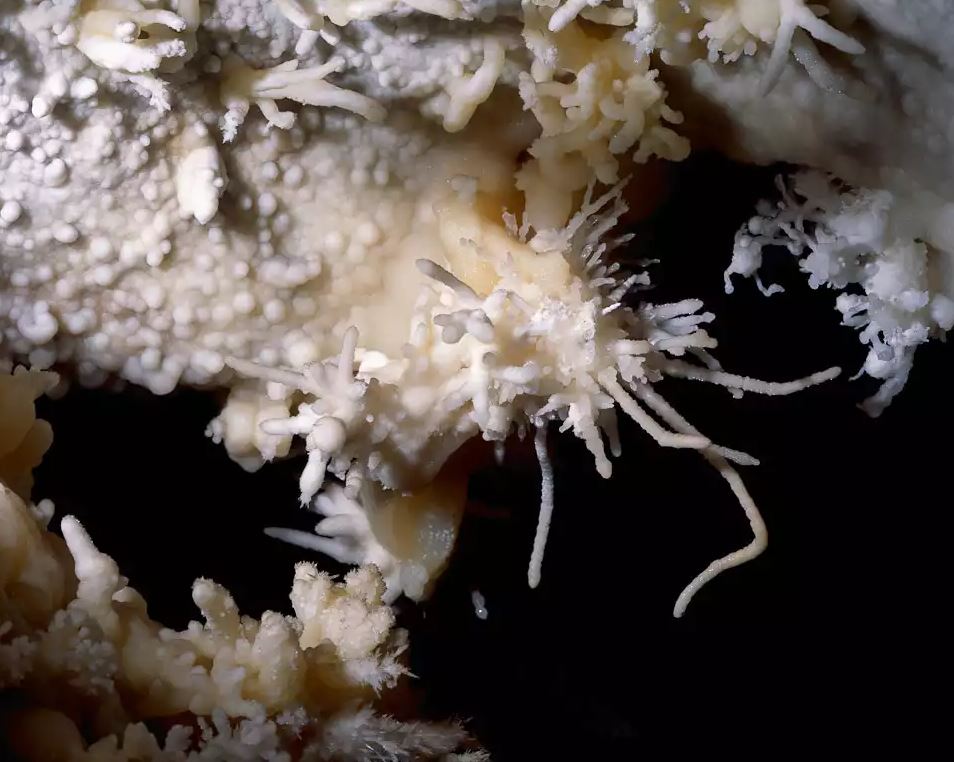 Helictite, cave deposit that has a branching, curved, or spiraled shape and may grow in any direction in seeming defiance of gravity. A helictite begins as a soda-straw-like tube formed as individual drops of water deposit calcium carbonate around the rim. The drops do not fall as in stalactite formation but evaporate in place. 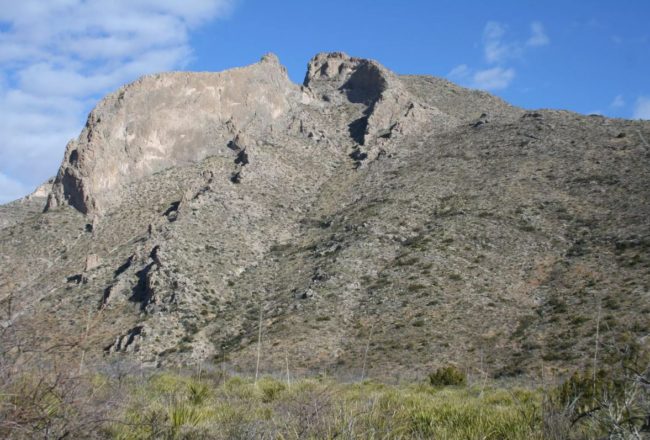 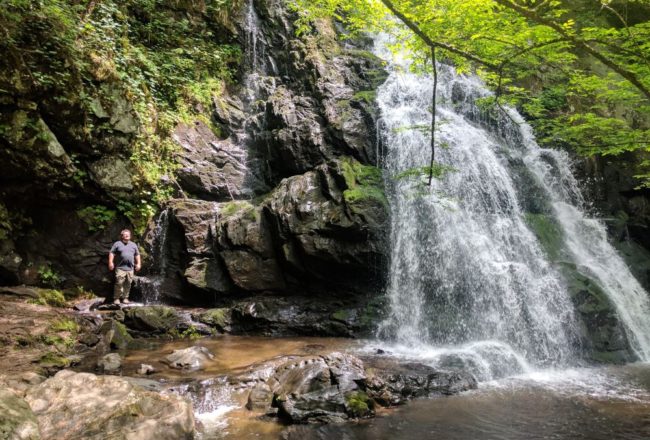