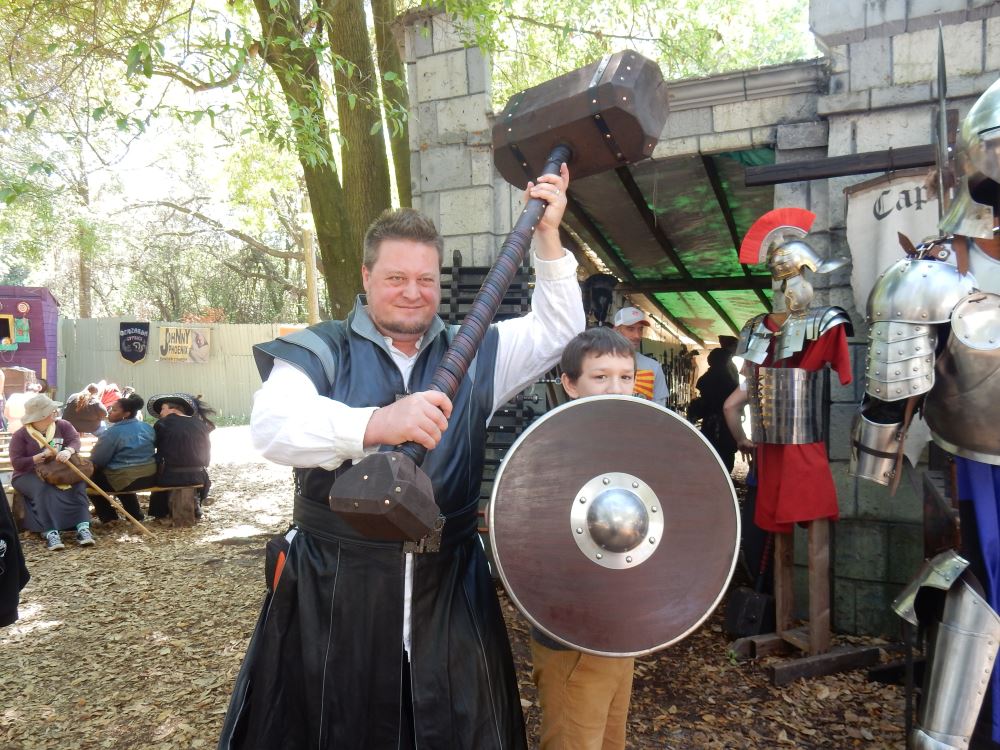 While in Florida, we decided to try and visit a friend we met playing Dungeons and Dragons online many years ago. Though we stopped playing a while before we set out on your wanderings, I’ve maintained contact with a large number of players through facebook. Back in Seattle, we spend nearly all our time with friends who shared our interests in all things Geeky and Gaming. On the road, we spend a lot more time with folks who have never even heard of Dungeons and Dragons, much less played it. So it is always a treat for us to get together and talk geek with folks. 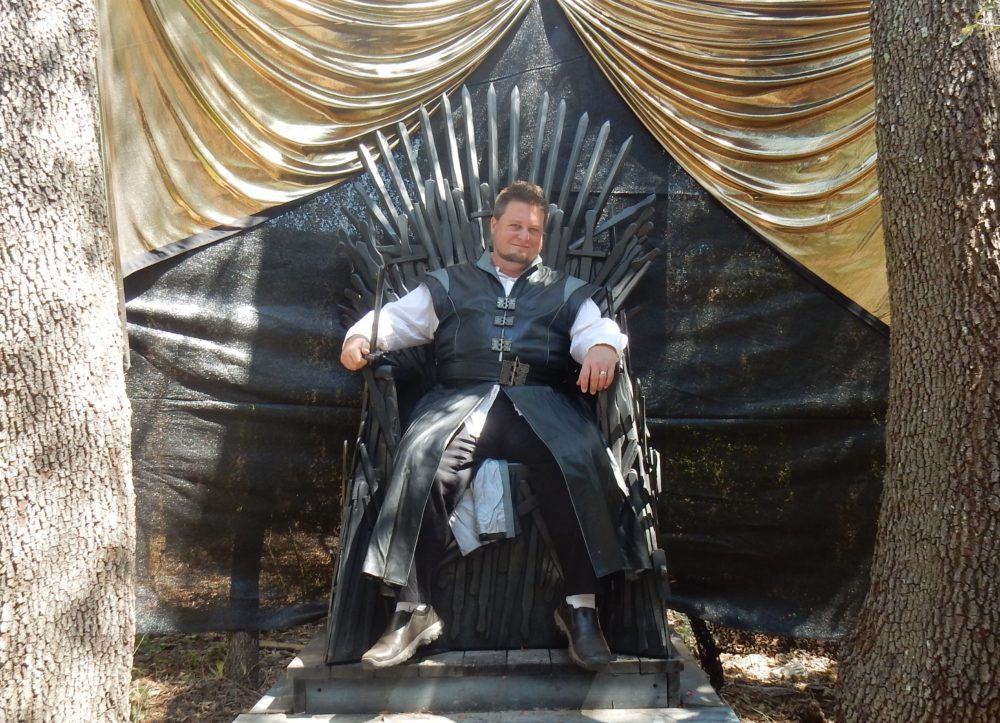 Speaking of Geekdom, of course they have one of these, and of course, I had to sit in it for a picture.

Twas a Fair Fair to be Fair

It just so happens our friend David was working at the Bay Area Renaissance Fair during the time we were in his neck of the woods. My father used to run such a festival up in Alaska so I have a long-standing affection for them. I’d also been a paid actor in the Three Barrons fair which is still held in Anchorage Alaska. We decided we would don our costumes and head over to the fair to enjoy the afternoon and then have some dinner and conversation after the fair closed up for the day.

While every fair has their own particulars, they are somewhat of a kind. The Bay Area Renaissance Fair (never to be referred to as the BARF) was very familiar to me despite never having attended it before. Like most of its kind, it is about 70% merchant booths and 30% performance theater. The performers and promoters of the fair clearly do this work out of a love of fair and the money earned tends to perpetuate the enterprise rather than make anyone wealthy. The communities surrounding fairs are a mix of locals and travelers who make a circuit of such festivals around the country. I feel a kinship with them all.

The Bay Area Renaissance Fair is located in a wooded lot near a college and had a very nice vibe to it. It was probably the largest I’ve been to and it took more than two hours to fully tour the sprawling grounds. They had a healthy mix of performance and merchants. Attention to detail by the organizers and vendors seemed average to high for Ren Fairs I’ve attended. Some fairs make the mistake of letting in vendors who just don’t “get it” and end up ruining the vibe with too modern looking booths and offerings. There is always a lot of anachronism going on, but keeping it to the fun or necessary sort is the way to go. 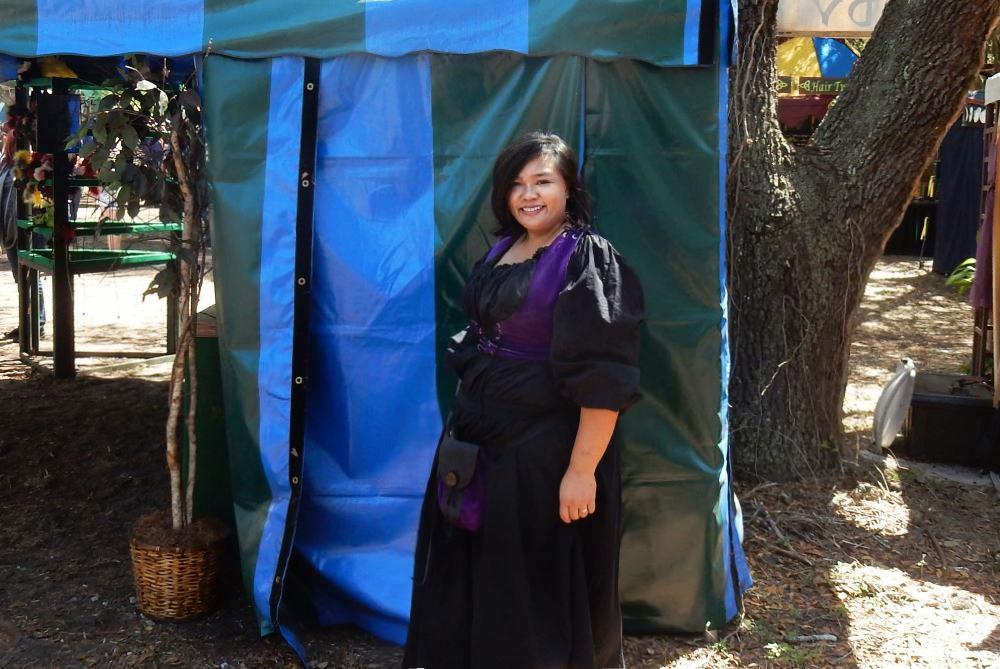 Here is Trail in her full regalia. We each keep a costume for such occasions.

We checked in with David who was working as a barker for the mermaid booth where fair guests could get their pictures taken with mermaids. I asked him in character as to what type of offspring I could expect were I to take a Mermaid as a wife. Apparently, it was the first time in his memory anyone had thought to ask so he didn’t have a ready answer for me. Inquiring minds want to know David! We made arrangements to meet up after the show and asked which were best performances to catch. He suggested the Washer Women, and if we were not easily offended, the Bastard Monks.

Most Ren fairs have an in-house staff, volunteers, and then traveling performers. The in-house staff tends to divide into “courts” that run parts of the fair and perform there. The queen’s court travels the whole of the fair and glues together the other courts. Most fairs have a group of commoners who do comedy performances, a fairy court that does face painting and the like, a group of pirates to man the tavern, and so forth. The Washer Women and Bastard Monks were traveling performers who make their living doing shows at fairs. Usually, the park pays them a bit, but they make most of their money on performance tips by passing the hat after the show. 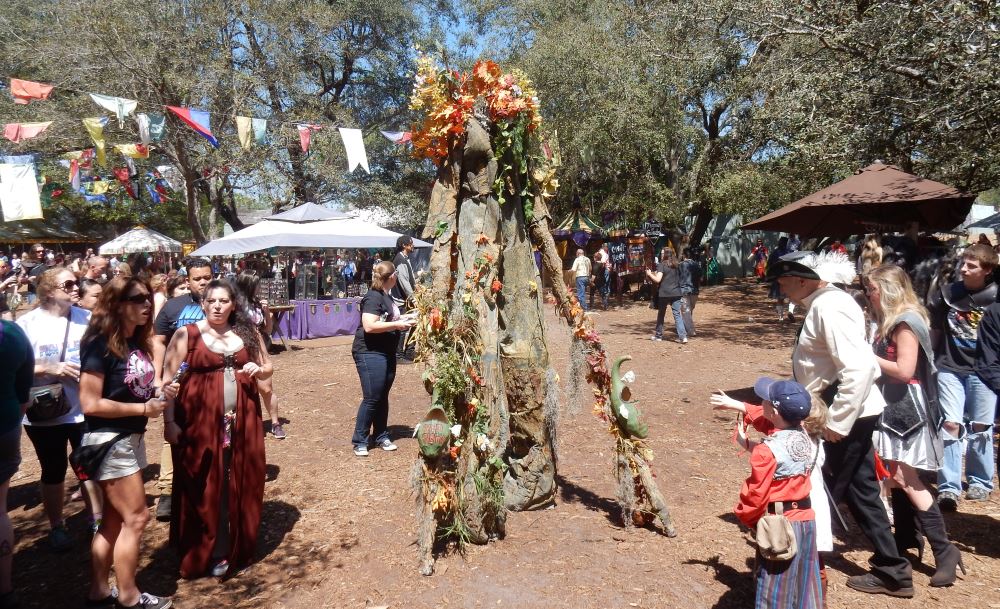 This tree was walking around the fair grounds collecting “seed money” and generally being very cool.

The Play is the Thing

Both of these were bawdy shows, something you see often at fairs. The Washer Women were very PG and family friendly. The dress up as rag cleaner women and make play with burly men in the audience. Much time is spent warming up the crowd by flinging wet laundry at the audience. Good times, though their show was 70% warming us up and 30% actual comedy. The charisma of the performers carried the show far more than the material did. The core amusement comes from making audience members do silly and embarrassing things, a ren fair staple, but a good one.

Bastard Monks was an adult only show, the first I’d seen during normal hours at a fair. At the Baron’s fair, we put on some shows like this after the public weren’t home for our own amusement so I was happy to check it out to see what mischief they would get up to. Mind you, the adult content here was all in the words spoken, not nudity. Bastard Monks is two friars discussing their love life and their understanding of God. One brother is cynical and brash, the other trying to play the innocent and faithful despite the usual passions of a young man. Their show was far more about the clever material and the two actors carried the weight of it but still got the audience to feel connected to the performance. Well done Bastard Monks.

One thing this fair was doing I’d not seen before were their food tours and tasting events. They had a beer and bacon tasting that paired various beers and pork products together. They also had a kind of tasting tour where you could pay a fee and get set drinks and food items throughout the fairgrounds. We didn’t partake since we were going to be eating after the fair, but I thought it was a good idea. All in all, we had a nice time at the BAR… at the Bay Area Renaissance Fair. 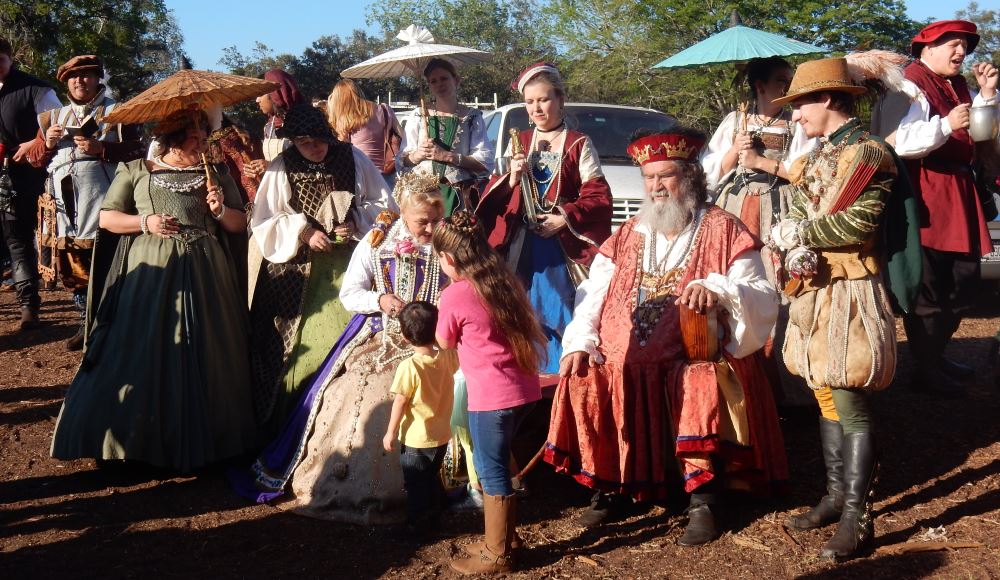 Here is the royal court at the Bay Area Ren Fair wishing folks well as they leave for the day.

By the time the fair closed up and we met up with David and his wife Monica the four of us were thick with clinging dust, something of another classic fair tradition. Everyone was a bit worn out but also hungry so we hit up a local Chinese food buffet to refuel and get to know one another face to face. We had a great time chatting about the Ren-Fair life and our travel adventures while scarfing down all you can eat Chinese standards. The food was decent, the company was wonderful.  A big thanks to them both for the adventure and camaraderie! 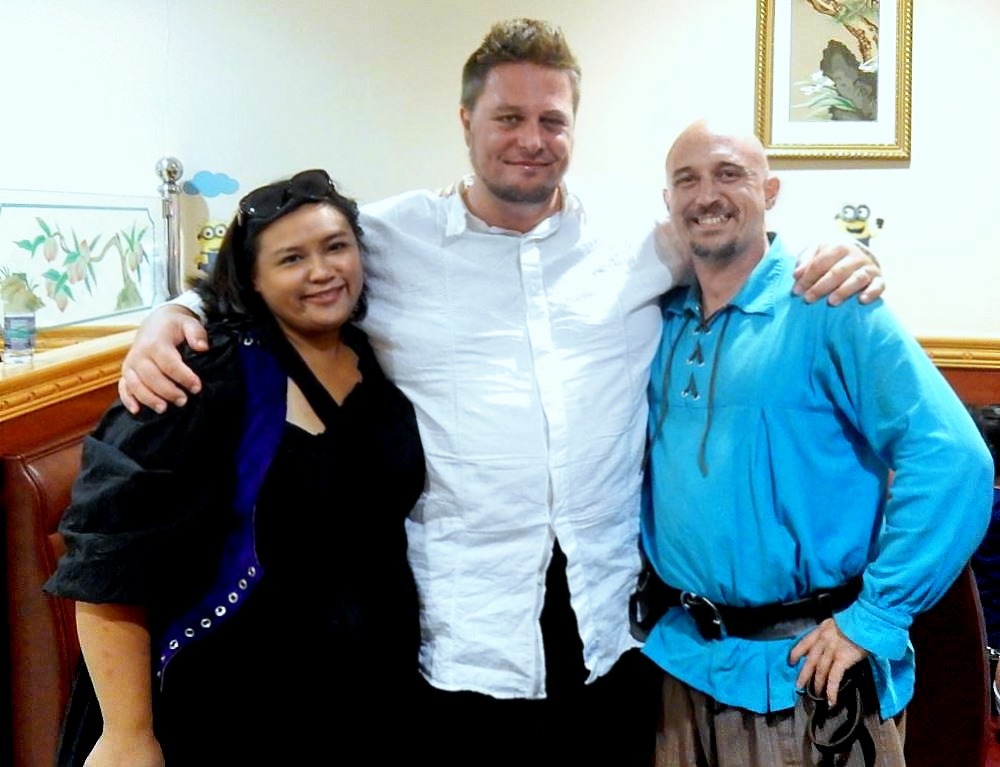 Here we are with our friend David in half costume at the endless buffet. 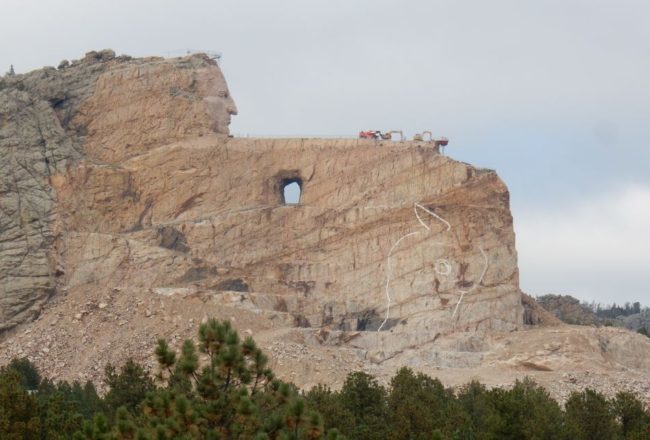 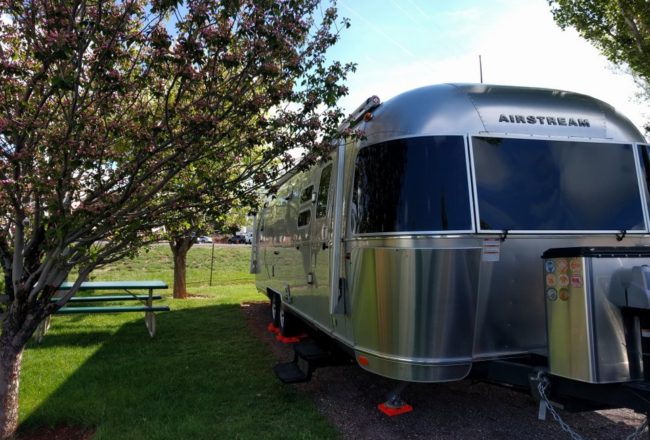 10 of the best websites for Airstream Fans