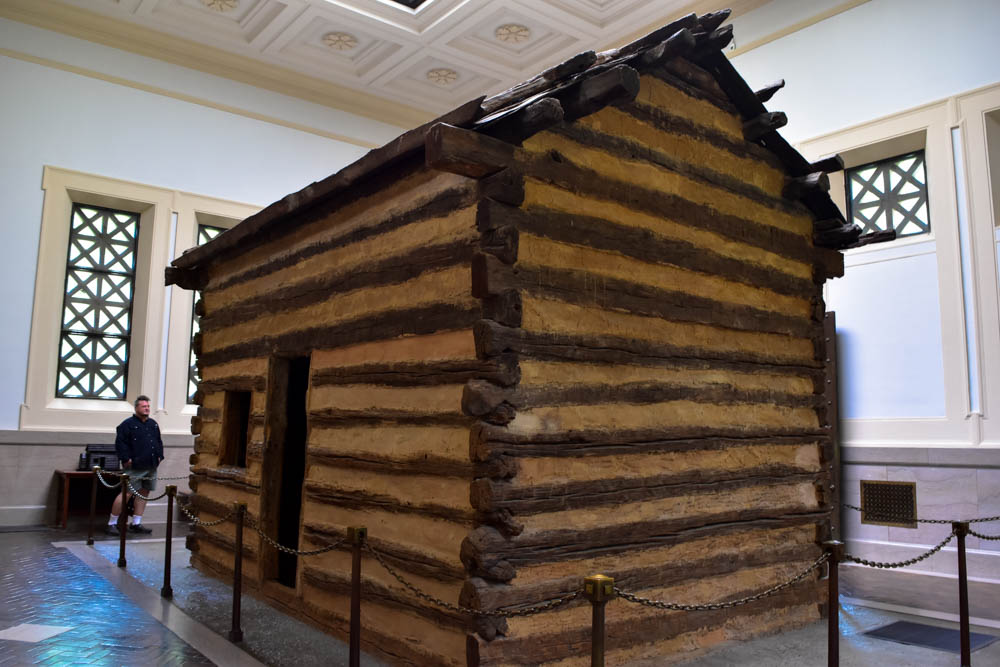 When we’re on the road our choice for entertainment isn’t music, but history lessons from Audible.com. So when we visit a National Monument or National Historic Park, being at that location helps me put all the history into a meaningful context, making it feel real and alive. Through the site’s preservation and interpretation, we can think critically about history rather than taking it at face value. That is what I intended when we stopped at Abraham Lincoln Birthplace National Historical Park.

On February 12, 1809, Abraham Lincoln was born in a modest one-room log cabin on a small farm in north-central Kentucky. Little did his parents know at the time, that in 52 years he would become the United States’ 16th president, let alone a legend in history.

Abraham Lincoln Birthplace National Historical Park preserves two separate farm sites in LaRue County. The first site and Lincoln’s actual birthplace, Sinking Spring, is located just south of a small town called Hodgenville, where he remained with his family until the age of two. The second site, Knob Creek Farm, is northeast of Hodgenville, where Lincoln lived until he was 7 years old.

On October 1808, Thomas and Nancy Lincoln settled on Sinking Spring Farm. Two months later, Abraham Lincoln was born in their one-room log cabin. In the visitor’s center, there’s a small museum containing a few artifacts from the Lincoln family including the original Lincoln Family Bible. Additional exhibits display an overview the Lincoln family genealogy, detail pioneer life with example artifacts, and an interactive timeline of Lincoln’s life. One interesting fact I learned here, is that Lincoln was the first president not born within the original 13 colonial states. 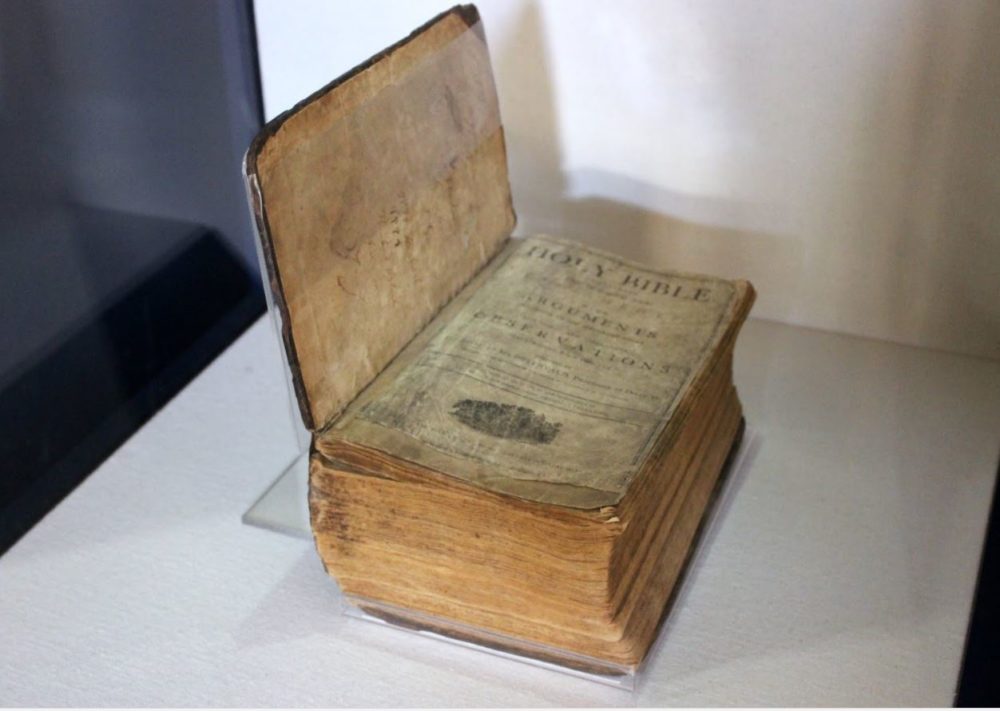 Located just below the hill where Abraham Lincoln was born, the Sinking Spring served as a valuable water source for the Lincoln family. The spring gets its name from the way the water “sinks” into a pit before disappearing into the earth. Although the National Park modified the appearance of the spring during early years of the park, there remain original natural rock formations on the back wall. 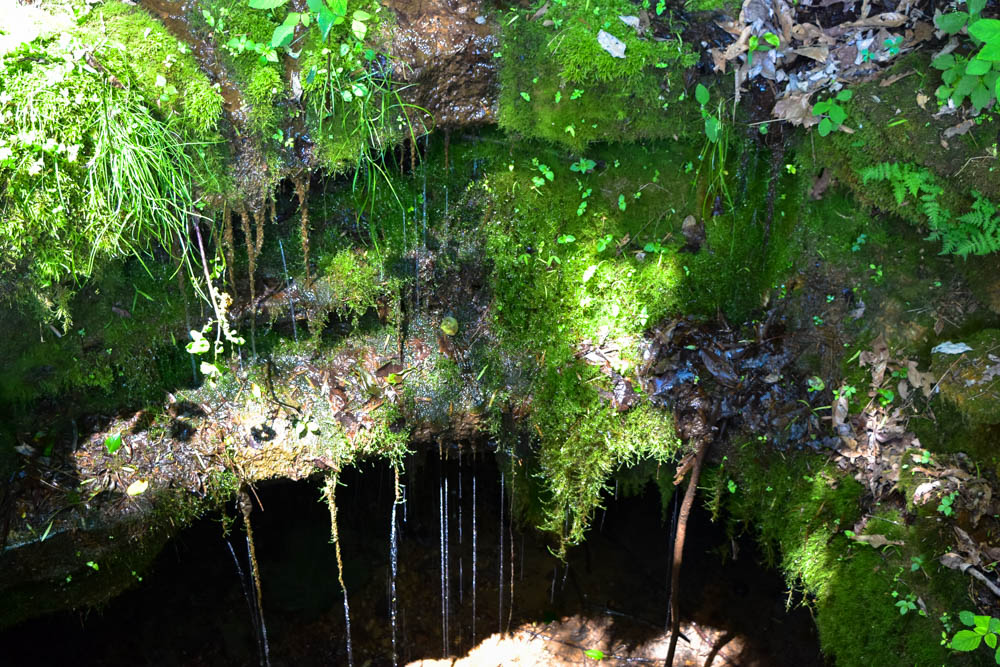 Atop a hill, a Beaux-Arts neo-classical Memorial Building sits like an eternal temple. I’m guessing that was the intent of John Russell Pope when he designed the building for the greatest president in U.S. History. President Theodore Roosevelt laid the cornerstone himself in 1909, while in 1911 President William Howard Taft ceremoniously dedicated the finished building. I counted 56 steps leading up to the memorial building, and inside a curator informed me that the number of steps represents the age at his assassination and death. 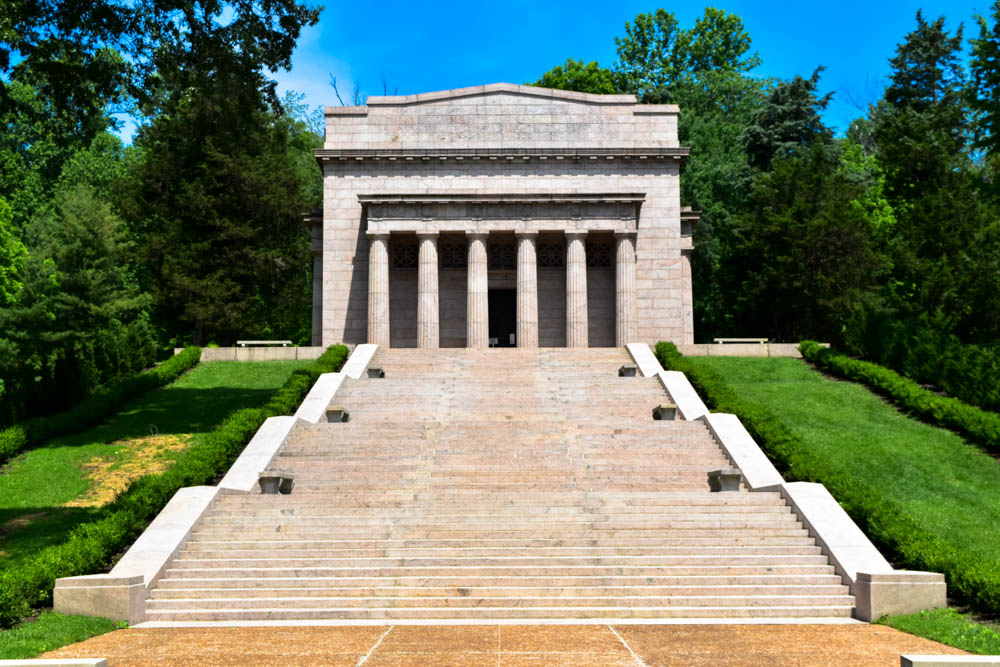 The memorial building preserves a replica cabin since unknown landowners dismantled the original building long before 1865.  Locals said that a nearby house used some of the logs from the original. Following that information, a New Yorker named A.W. Dennett bought the Lincoln farm in 1894. He then used the logs from this nearby house to assemble a cabin similar in appearance to the original Lincoln cabin. A short time later, Dennett dismantled this version of the cabin and took it on a roadshow, re-erecting it as needed for exhibition in many cities. Eventually, the Lincoln Farm Association (LFA), purchased the logs for this cabin, believing that all were Lincoln Logs. When workers tried to reconstruct the cabin, they discovered that none of the logs were original and that the cabin was too big for the Memorial Building. Finally, they reduced the cabin’s size from 16-by-18 feet to 12-by-17 feet before assembling it inside of the Memorial Building. 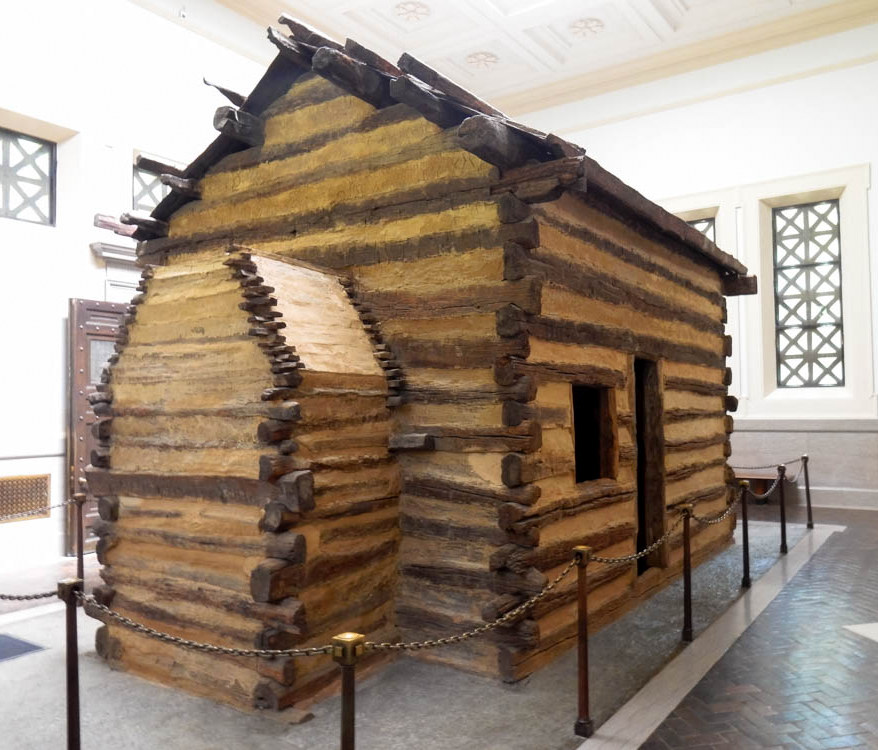 Located near present-day U.S. Highway 31E, the Lincolns moved to this farm when Abraham was only two years old. His father, Thomas Lincoln, leased the Knob Creek farmland in hopes of regaining the Sinking Spring Farm. Here I learned of Abraham Lincoln’s earliest memories was of his near-drowning in Knob Creek, and a neighbor’s son rescuing him.

In 2001, the owners of Knob Creek Farm sold its land and buildings to be included in the Abraham Lincoln Birthplace National Historical Park. This detached site consists of four buildings, two of which are historical in nature. The cabin is known as the Gollaher Cabin and was built roughly around the same time as the original, but then moved in the early 1900s to its current location. Nearby a 1930s Lincoln Tavern was built in the same log style to service tourists with drink and food. Today the building houses a museum and gift shop. 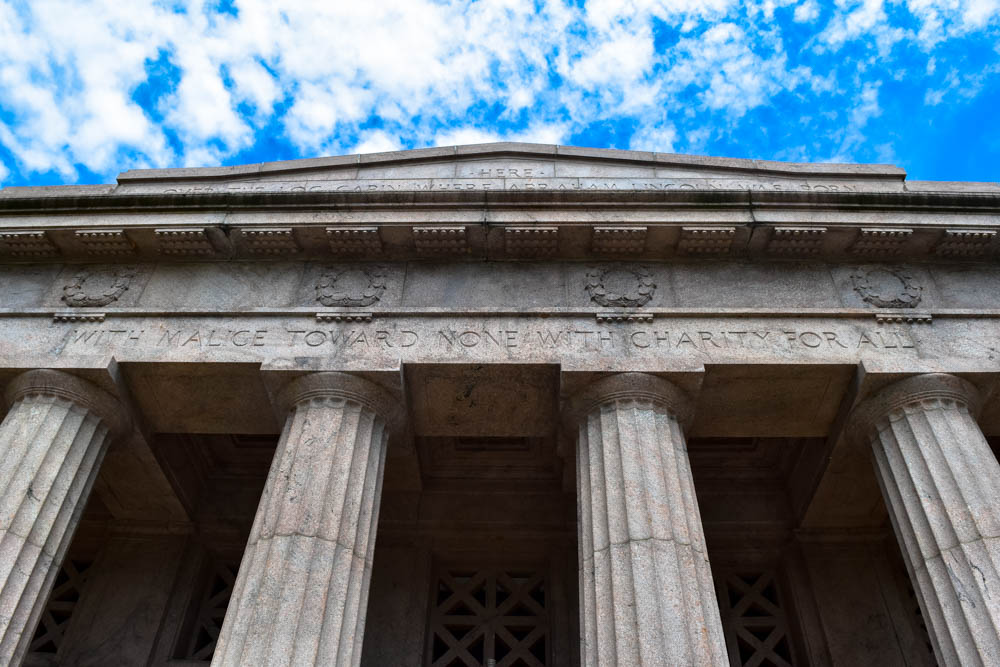 “With Malice toward none, with charity for all…” 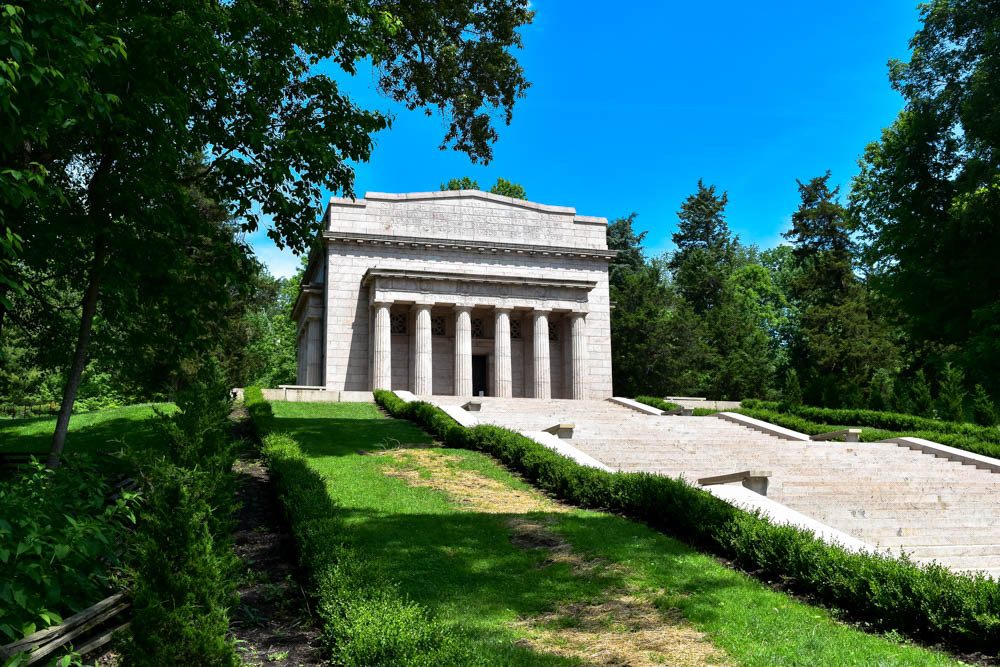 56 steps leading up the Memorial building 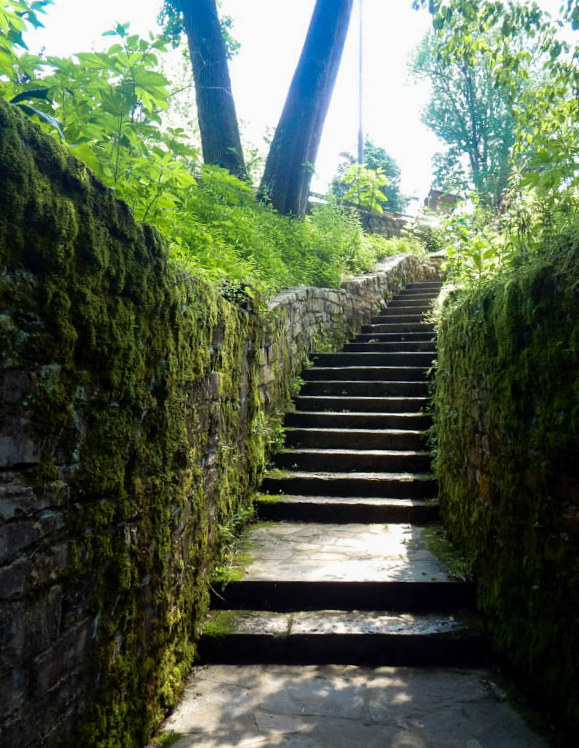 Steps leading up and out of the Sinking Spring 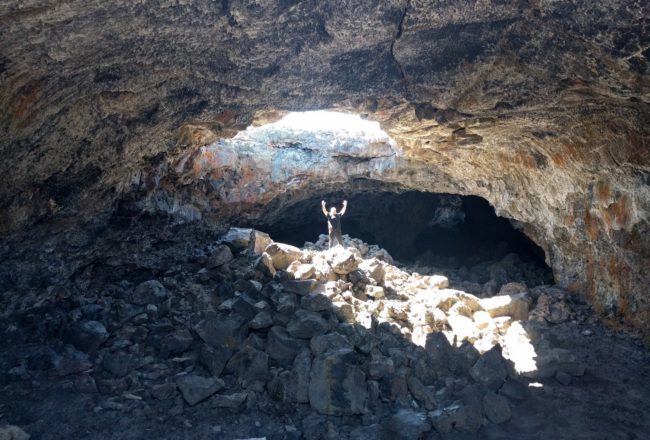 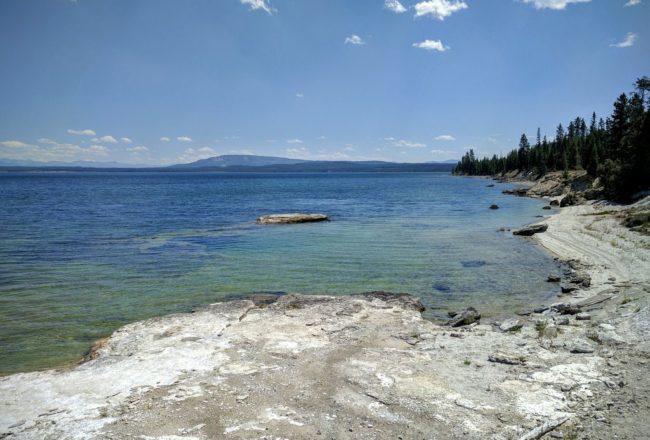