5 Things I Don’t Love About my Airstream 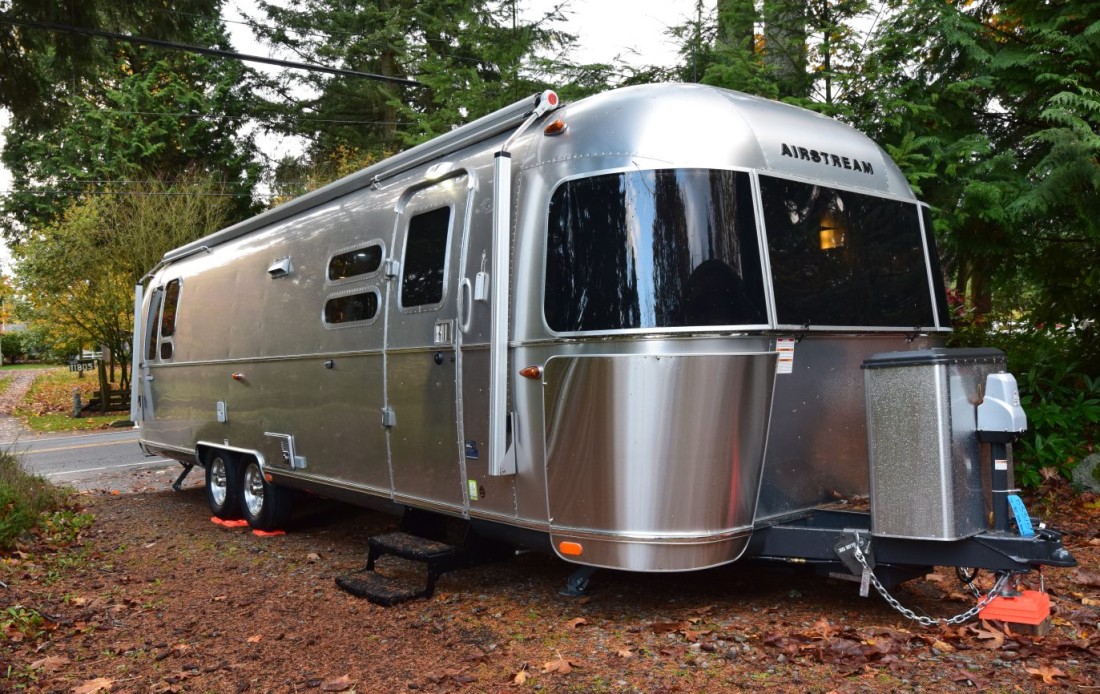 Don’t get me wrong, I love my trailer which is my home and castle. The list of things I love about my Airstream is a long one but not everything about our Airstream is perfect. There are certain issues that have proven themselves to be less than awesome over the course of a year living in it full time. Before I get started, keep in mind we live in a 2016 International and every year and brand will have its own peculiarities. That said, in the interest of a better brand and the joy of kvetching, here are 5 things I don’t love about my Airstream.

Nearly all the windows on an airstream open up, which is great. But the mechanism that opens them is not great. Like many trailers, they lift up like a flap, attached at the top. This is controlled by two “arms” on either side of the window. A knob on each arm sticks out inside the trailer and you push up on them, levering out the window. The advantage of the design is it can get the windows open pretty far and the lever arms seat into a plastic track holding the window open at a selection of angles.

But there are many problems. First among them is that the seals on the windows are somewhat sticky and the way the levers are designed you have a mechanical disadvantage opening them. The combination of weak pushing force and sticky seals means you can’t open them much of the time. I’m a big strong fellow and I just can’t do it much of the time. The bug screens on the inside prevent you from pushing on the window directly to break the seal. We have to go outside and use a key or screwdriver to pry open the bottom of the window to get them open most of the time.

The dealer warned us of this and suggested silicone lubricant. We bought some, applied it liberally, and they still stick if left closed for more than a day or so. It helps a little, but not much. It’s not like they are glued shut, but the weak force of the levels just isn’t enough to push them open. Much like trying to open an oyster from the hinge end of the shell. Making matters just a bit worse, the handles for the levers stick out such that when you close the blinds, you will often run into them and loose your grip on the blind pull causing the blind to snap back up. Not a big deal but it drives you a bit crazy when it happens. 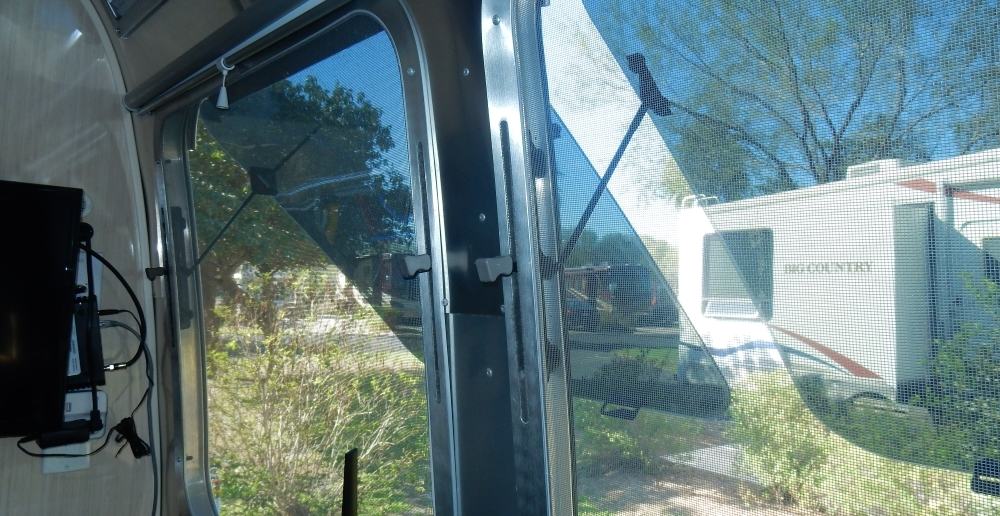 It looks nice and it holds the windows open, but as usual, we had to go outside to actually open them to take this picture.

Our Airstream has a little compartment on the outside that contains a hose with an attached shower head and two handles to run hot and cold water. While I don’t often feel the need for a hot shower outside the trailer, it’s not a bad idea and I could see if I were boondocking or just needed a hot water source outside for cleaning, it could be a handy feature. Unfortunately, it is badly designed and manufactured.

The problem comes when you try to put it away. You have to coil up the hose and stuff it in the compartment then close the hatch. The two water knows are super easy to turn and the hose has to be wound up around them and the shower head pushes up against them to close it up. The result of this is that trying to put it away constantly turns on the water flow. There is no shut-off switch on the faucet or the shower head to stop this. I spent a good 20 minutes trying to get it closed and not have it dribble water out of the hatch. Worse is if you put it away with your pump off, then turned it on later, you would never know you were bleeding water out the side of the trailer.

Again, our dealer was well aware of this problem, but in this case, their best offer of a solution was to replace it with an aftermarket faucet or just never open it once you got it closed. I took the latter advice and have not touched it since my initial encounter with the beast. 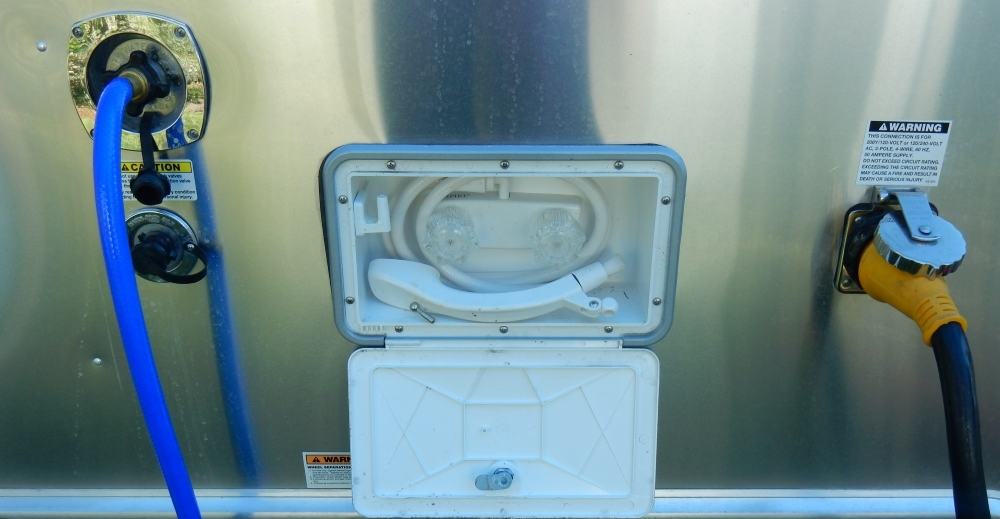 Oh, it looks innocent enough, but breathe too had on those knobs and it will dribble water for the rest of eternity.

Under the kitchen counter, there is a space where the plumbing gas and electrical wires and pipes are found. It is partly screened off by a plywood wall about 3/4 the height of the cabinet. It has a gap so you can, to some degree, access these things. The problem is that some of the drawers are higher than this barrier and things can push out the back of the drawer and fall in. Same goes for some items in the cabinet under the sink. Once they fall down there, they are very hard to get out because of the divider wall designed to help keep things from getting back there. It’s too narrow for a hand (at least mine), too far back to easily reach, and too high to look down into.

We’ve had a few items fall into the black hole and getting them out involves a lot of trial and error with a long pair of kitchen tongs grabbing blindly until you luck onto the thing you are searching for. All in all, I think it would be a lot better if the barrier were shorter and transparent or no barrier or one that was more completely covered the space. Or perhaps just a guard on the drawers that stopped items from falling out the back of them. 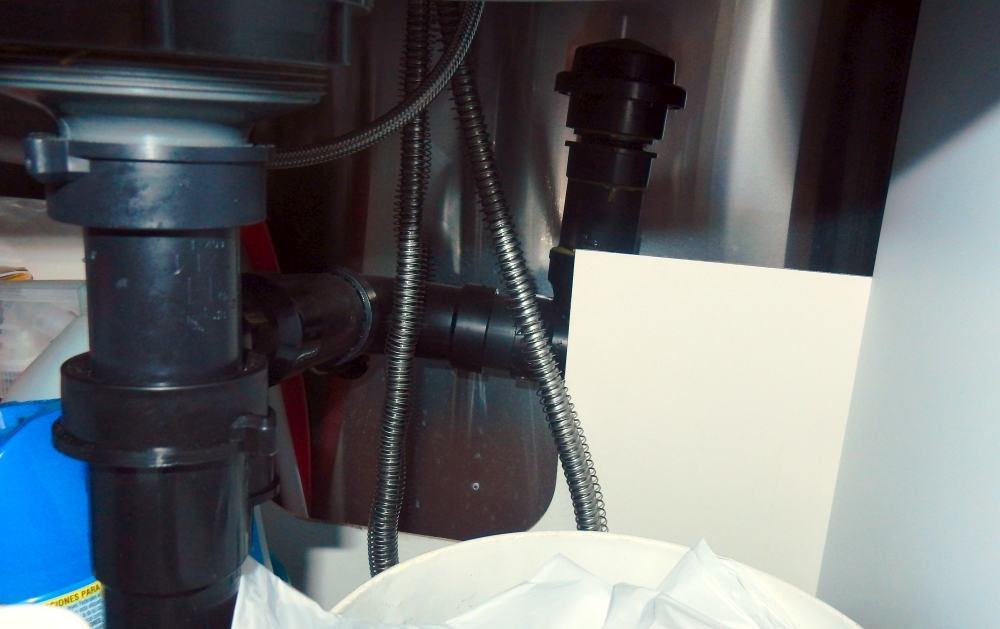 #4: Half way to the digital age

Airstream has taken some steps to make their modern trailers fit a modern life. There are many outlets in the trailer and even a few USB plug including a set on either side of the bed. There is a DVD player that is connected to the TVs and has blue tooth capabilities so you get a kind of mini entertainment system. Two flat panel TVs have all the appropriate hookups for modern devices. All that is pretty decent, but it falls short in some important areas.

Firstly, there just are not enough USB ports for this mobile age. The outlets in the dining area and lounge should all have two USB ports so you can plug in a phone wherever you happen to be spending time. Secondly, there should be an easy way to run antenna lines up to the roof of the Airstream. Getting a good cell or wireless signal isn’t easy inside an aluminum tube. Signal boosters are an easy solution except that there is no easy way to get an antenna up on the roof. You have to pay someone to put custom holes in your roof or wind a cord through the door or the refrigerator vent or some other hack.

Finally, I’d love to see the trailer have a blue tooth system for monitoring the systems in the trailer. I’d love to be able to check tank levels while I am outside rather than having to hop into the trailer, then get out again, then hop back in to check again. The hard wired one is probably essential but it would be great if all the data fed into an app. Then I could see the battery level, the faults in the electrical and so on, even control the TV radio. Most modern cars come with features like this now and I think its time for Airstream to step up their game. 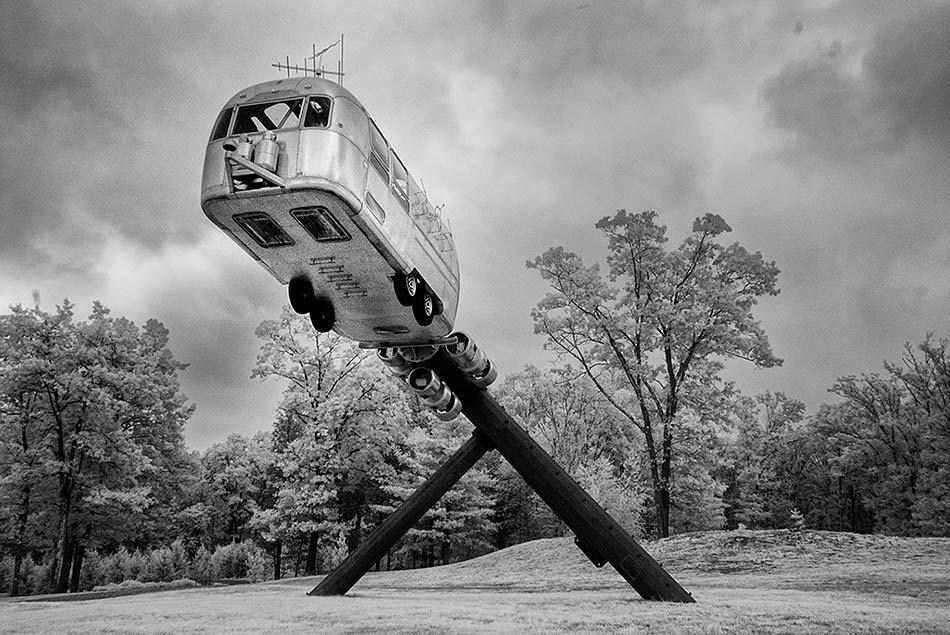 We should not have to go this far to get food wifi reception in our Airstreams.

Nearly everyone buying a new trailer of any brand is going to run into a few issues, but that doesn’t mean I have to be happy about them. We have had three that rise to the level of highly irritating.

The first was that the interior seals were not properly installed. This led to an invasion of yellow jackets in the first week of parking our trailer. While it made for a great story, it was a simple mistake of just not installing things correctly and then not catching it on inspection.

The second issue is that our main entry door just doesn’t quite fit as well as it should. It requires a fair bit of force to seal it up tight. We noticed this quickly but our dealer and another we took it too insisted it was just that the trailer wasn’t quite level. Well after a year of having the trailer it consistently has this problem no matter how level the trailer is or isn’t. We either have to get a whole new door (if we can convince a dealer it doesn’t work right) or just live with it. We just live with it for now. I broke more than one door handle early on trying to seal it from the inside until we developed a technique for slamming it shut using speed rather than power.

Last but not least, we have had persistent low-grade issues with the electrical system in the trailer. Two dealers have had a go at fixing it. Each time thy think they fixed it, and each time some underlying problem slowly reasserts itself. The result is our LEDs and USB outlets burn out on one side of the trailer and at one point the furnace was knocked out of commission. 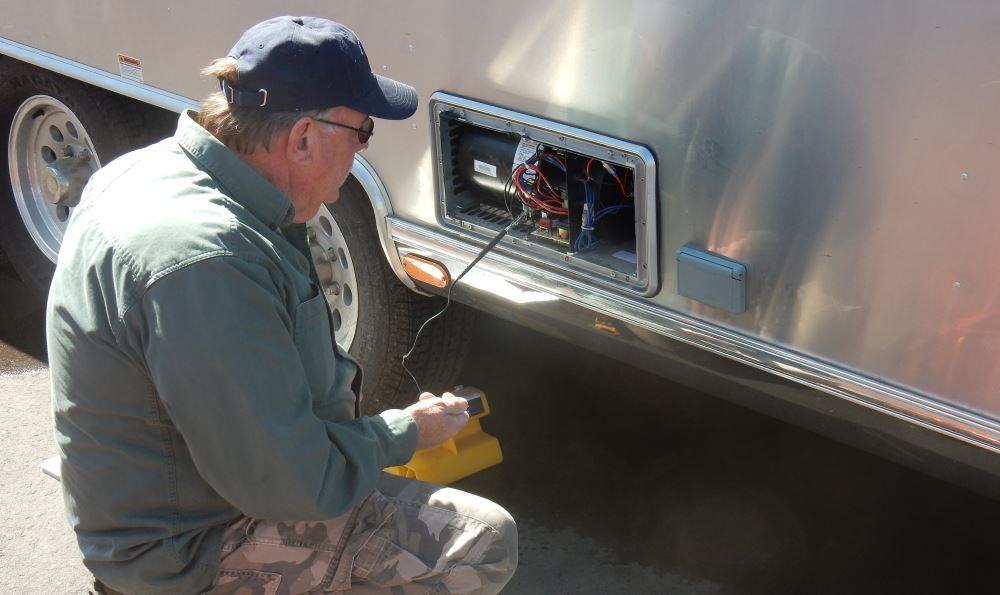 One of the electricians who was sure something was wrong, but no so sure what exactly was wrong. 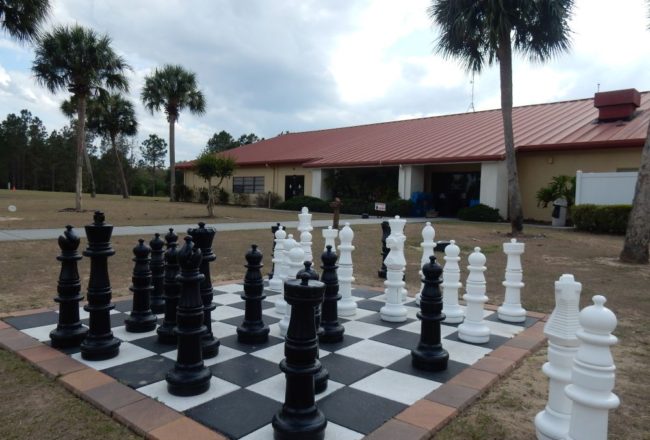 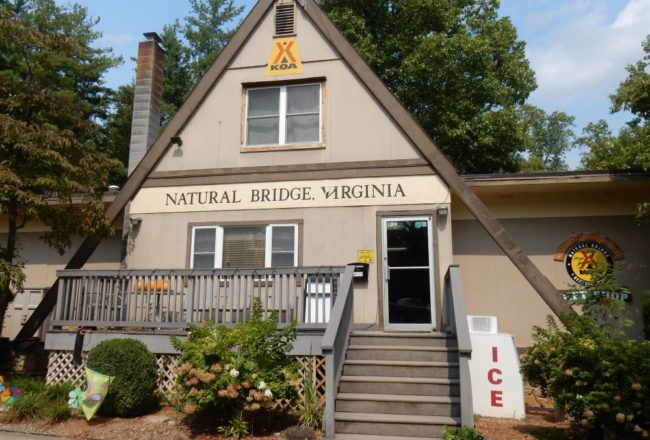 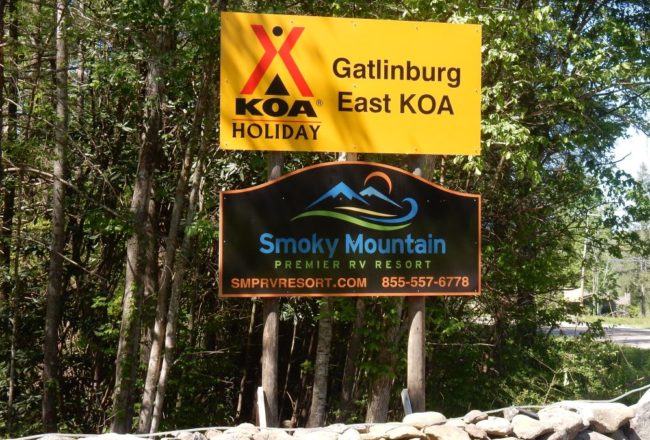